The Seraphon are a mysterious race of Lizard-like beings, led by the Slaan. Although nominally of the forces of Order, their intentions are their own. They obey only the orders set by the Old Ones, an unknown race older than time, now long gone. The leader of the Seraphon is a powerful Slann Wizard known as Lord Kroak. After millenia of silence he has re-appeared, for Be’Lakors rampage through the realms threatens even the carefully laid plans of the Old Ones.

Admittedly it gets confusing on non-Predatory spells, as often the spell is otherwise identical or loses a bonus, like the Bound Umbral Spellportal not having unlimited range in Ulgu despite paying more, but the mechanic was otherwise solid and made Predatory spells a bit more appetizing.

These only covered the ones that were introduced at the launch of 2.0 with Malign Sorcery, what was missing in the battletome was the generic Endless Spells introduced in Forbidden Power and this rectifies that.

First, Bound Soulscream Bridge is uninteresting. Like many non-predatory spells it’s just identical to the original but youre paying a premium, moving on. The two predatory spells Bound Lachon the Soulseeker and Bound Horrorghast do what you’d expect, your opponent can’t seize control which means you have much more control over where Lachon goes, so your opponent can’t make use of the transport and you can keep the Horroghast far, far away from you.

The Bound Shards of Valagharr while not a predatory spell, does have a similar effect that might make it more appealing to Seraphon players. The normal version requires players to roll off and the winner gets to pick one of the two models to move. The bound version immediately defers to the Seraphon player to pick and move one. Since it can sabotage the movement of enemy armies it can be a strong tactical choice for players. 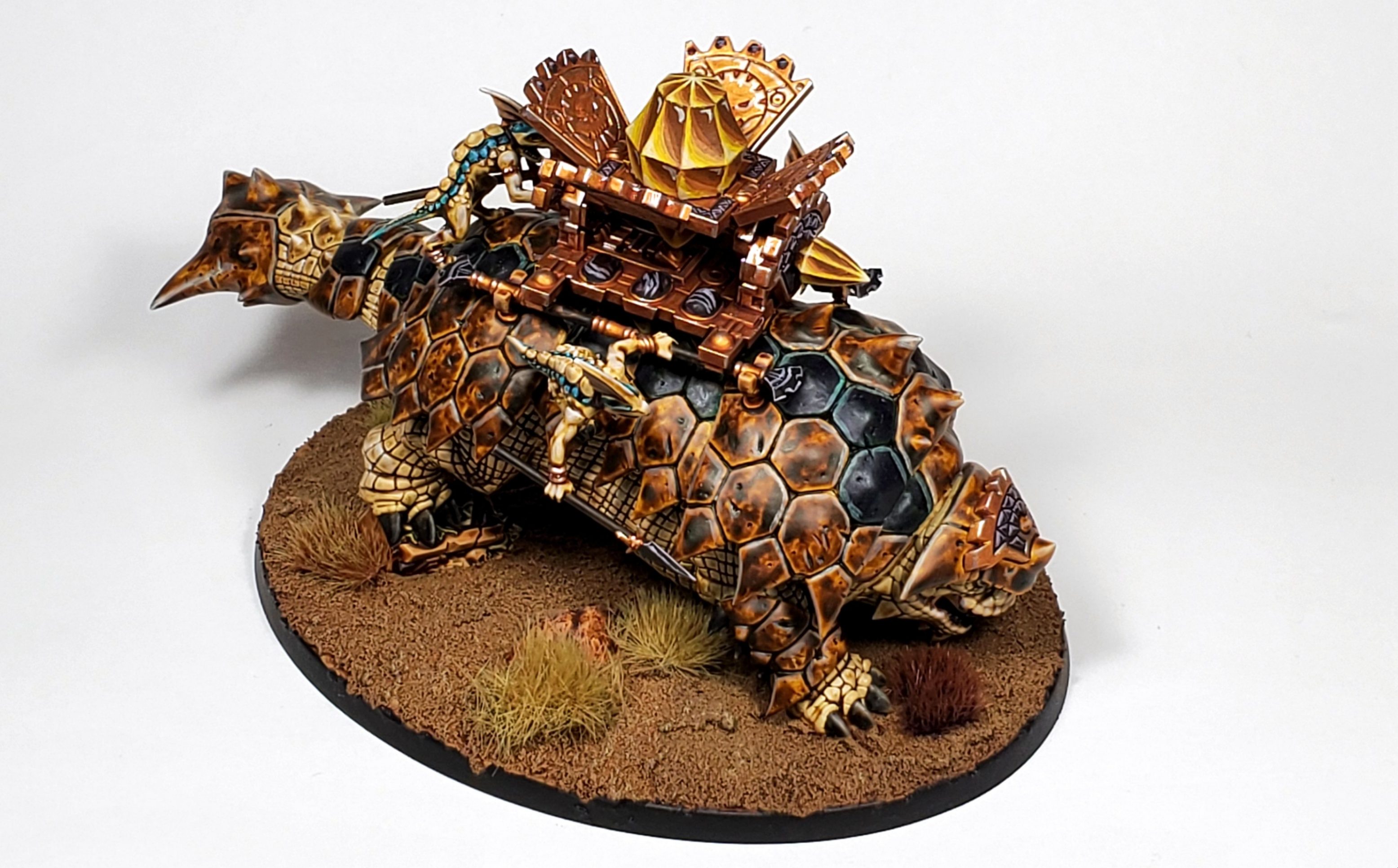 This is locked behind the Thunder Lizard allegiance which is absolutely fine, it was made for these guys! The Stegadon with Skink Chief gains the Prime Warbeast command trait, despite becoming a named character. It’s the mandatory trait for Thunder Lizards, even if he’s not your General. It’s hard to understand exactly how this works if he isn’t your General, as the rules say a General with a Monster mount must take this. If the General is another Monster mount, does this guy take it again? Can the general take a different one? I’m going to assume the former, but an FAQ will need to clear that up.

The primary benefit is the Lance of Cosmic Power which, as a name, sounds rad as hell. The Stegadon with Skink Chief can command the other units in the Battalion to fire their weapons at the same enemy unit all at once, doing D3 mortal wounds for each die roll of 2+. That’s 3d3 Mortal Wounds if maxed out, and while it’s once per game, good timing could potentially wipe out a Hero from 24” away.

I think this Battalion will see some use, Thunder Lizards are quite popular even at the tourney level and it doesn’t have much of a tax as these are all units you’re bringing anyway. Due to the way Seraphon Battalions are constructed they don’t generally have a ton of options, as only one, maybe 2 battalions will line up with their subfactions chosen focus. More options is always good.

Sadly, Lord Kroak is not in the book and his absence feels very apparent. It feels like he was supposed to be, he has a role in the story if not a direct participant. It’s possible he was supposed to show up but had to be written out due to production or time constraints, but it’s just conjecture. He’ll likely show up in the next book, Kragnos or shortly before it. Check out his upcoming kick ass model if you haven’t see it though.

Kharadron Overlords spend much of their time in Chamon, the realm of Metal. It’s their home as much as anything can be called as such and they will defend it from the manipulations of Tzeentch. Check out what boons they’ve picked up, coming up next.