One of the main locations Be’lakor’s rampage of destruction tears through is Chamon, Realm of Metal. For there Tzeentch and the Kharadron Overlords fight each other for the precious metals contained within. The Hallowed Knights of the Stormcast Eternals stage an epic battle here, and the Duardin who inhabit the realm offer their aide. To assist them they come with new Triumphs and a new battalion to represent the battle.

A few tables of Triumphs to spend your aether gold shares on for different heroes is the biggest thing that the Kharadrons got in this book. The majority happen in the hero phase, giving you more chances to actually use your shares of aether gold since they can only be used once per phase. Aether-Khemists, Endrinmasters, and Navigators each get 2 new Triumphs to use. Of course they are still once per battle but if you use a share of aether gold then they can be used multiple times. 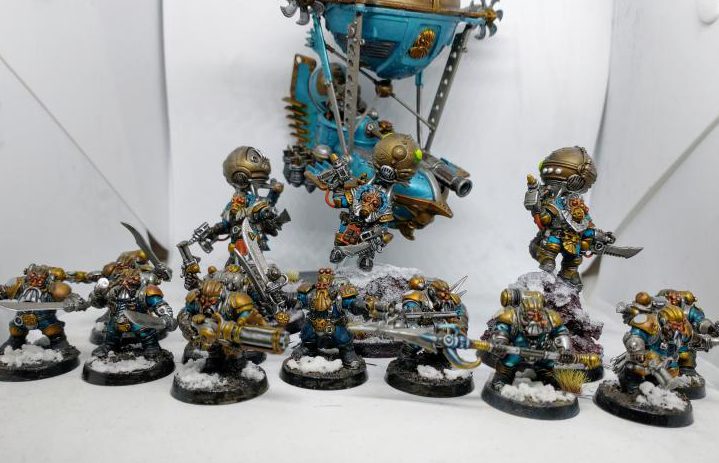 Barak-Zilfin only. Sorry any other sky port, these guys are locked to Zilfin. 120 points buys you a battalion of

The Endrinmaster no longer being able to have a Command Trait or Artefact of {ower hurts since you were probably taking it as your General to make the other 2 units in this battalion battleline. What you gain is +3” move on these units and each unit can choose a Sky Vessel within 3” of them to also gain +3” move for that turn. This would have been pretty awesome on Barak-Zon for the combat boosts, but as Barak-Zilfin don’t actually have much use for the extra movement. If you’re taking these units already, have the points spare, and were already going with Zilfin then sure, take the battalion, but otherwise you can pretty much just ignore it.

The Triumphs are a nice boost to Kharadrons as a whole, for the most part they’re pretty situational, but for many being able to use the hero’s share of aether gold in the hero phase adds some utility to their uses since you can only use one once per phase across your army, but you’re not necessarily rushing to use any of them outside of the Khemists re-rolls to wound while still aboard an Ironclad. Also want to note that the points costs on these heros hasn’t changed either, so they just get to use these triumphs if they want, without having lost anything.

The battalion you’re not going to be taking much or seeing much of. If it didn’t lock you into Zilfin and didn’t make the hero unique without still getting to have the Zilfin command trait then maybe you’d see it more. I’m not sure why the Seraphon battalion gives the command trait explicitly, but this just didn’t follow the same format. Strange.

The Forces of Order aren’t the only ones fighting Be’lakor and his rampaging anarchy. The Nighthaunts of the Court of Lady Olynder also have reason to fight, and are given many, many new tools to aide them in this struggle. Stick around for the next part in our Be’lakor coverage!