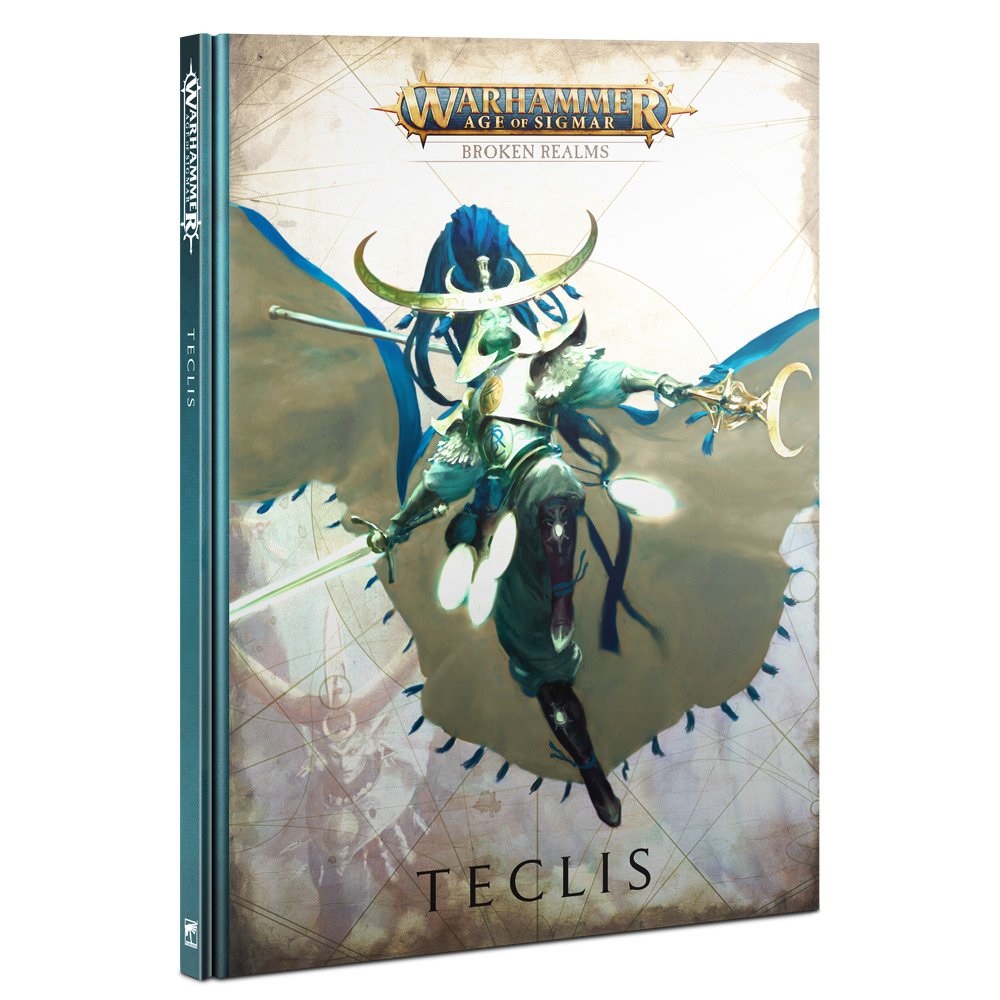 Be warned there are spoilers going forward for Morathi and Teclis, so if you still want to read the books yourself, turn back now.

Rather unexpectedly, Broken Realms: Be’lakor is going up for preorder this weekend, continuing the Broken Realms Saga. As a result, we want to get you up to speed on what’s been happening so far, as it’s been pretty big! For a recap of the first book, Morathi check out our review here. Major event includes Morathi ascending to Godhood, seizing one of the Cities of Sigmar away from the God King himself, and in the process leaked out just enough of Slaanesh’s essence to create a new entity called the Newborn. It’s a lot, and was a pleasant surprised from previous campaign books which didn’t see much impact other than some land changing hands. Teclis has big shoes to fill, so lets look at a summary of events.

Act one opens with the forces of Nagash striking out against Hysh, the realm of Light and the home of Teclis. Nagash has successfully made in-roads into all of the Mortal Realms, and even set up an outpost in Eightpoints, the center of all Realms that Archaon holds. Hysh has remained out of his grasp until now, and he launches an invasion on to the City of Sigmar Settler’s Gain. The combined Human and Lumineth forces almost were defeated as the Ossiarch Bonereapers pressed into the city defenses. It was only by the appearance of Teclis that Settler’s Gain remained standing. Teclis became enraged at this attack on his own land and mustered the Lumineth forces to take the fight to Nagash, once and for all.

The rest of the chapter follows the military exploits of the Lumineth invading Shyish, the Realm of Death. The Lumineth make powerful in roads into Shyish, but the Ossiarchs fight their damndest as well. Fighting the Ossiarchs is no simple task, for every fallen soldier is more bones for the Ossiarchs to shape into new soldiers, and elf bones are lithe but strong. Ultimately despite their losses the Lumineth make it deep into Shyish, their goal is not to merely win a military victory, they were never sure this was possible. The goal was to show that Nagash could be stopped and pushed back, and the people of Shyish were granted Light magic to fight back against their Master.

Bookending this military campaign, we get insight into Teclis as he has conversations through magical means with Nagash and Alarrielle. The banter between Nagash and Teclis is excellent in a campy sort of way, and the conversation with Alarielle gives potential future insight into the plot. Alarielle warns Teclis he is on a fool’s errand chasing Nagash, and that he is ignoring a threat “Even greater” than Nagash, one his brother Tyrion is fighting. What this threat is we don’t know, but if it surpasses Nagash, it can’t be good.

Act 2: War of the Mortatchs

The focus shifts to Nagash’s three original Mortarchs. With two of his generals, Lady Olynder and Katakros busy holding Eightpoints, Nagash must rely on Mannfred, Nefereta and Arkhan. Nagash’s plan involves finding massive realmgates from other realms that lead to Shyish and destroying them. This seemingly counter-intuitive act would block off the spirits of the dead and create strong pockets of arcane Death energy in other realms as the souls were trapped behind. Nagash would be able to draw upon this power to make future incursions much easier. Nagash assigned each Mortarch to a different realm, Mannfred to Ghyran, Neferreta to Chamon and Arkhan to Hysh.

Mannfred’s journey into Ghyran, the realm of Life, was as difficult as he had anticipated. Immediately he set up the ritual to corrupt the Bleeding Gate, and encountered the forces of Rotigus and his Maggotkin. Mannfred sent his forces to die, for nothing mattered but completing the ritual. The problem became compounded when Alarielle herself daned to appear, forcing Mannfred into a two-front battle. Try as he might, none of his forces were strong enough to repel the Everqueen. He attempted to use his own Death magic on her, but within her realm, he was of no match. Ultimately, Mannfred made his retreat, the ritual a failure. Nefereta faced opposition in Chamon as well, in the form of the Aelfen twins Ellathor and Ellania. Following a tip from a Khadaron captain, the twins mustered a small force to confront the Mortarch in the caves in the mountains of Chamon. Much like Mannfred, Nefereta is thwarted by the forces of Order and she escapes.

Arkhan faces the toughest fight of all in Hysh. The battle is a slow grind at first, but Arkhan slowly finds himself falling behind. The elves of Ymetrica found the solution to fighting off the Bonereapers, incinerating their own with Light magic when they died. With no bones to collect, the forces of Death slowly whittled away. One of Teclis’s most powerful warriors, Eltharion, takes the field against Arkhan. Eltharion was killed by Arkhan in The End Times and now he’s back with a vengeance. During a protracted fight near the edge of the realm, Eltharion successfully outduels Arkhan and stabs him in the chest. Arkhan is then pushed back to the edge of the realm, into pure light. The most loyal mortarch of Nagash is dead and Eltharion received his revenge.

The finale is here. Several months after act 2, Nagash finally decides if you need to do things right, you do it yourself. He launches an invasion into Hysh himself, leading the collective forces of Death that he can muster, for one final assault on Ymetrica. Initially, the battle seems hopeless for the Lumineth, as Nagash’s power is too great. Centuries of planning were finally coming together and even with his setbacks, Nagash would have his prize.

As a side note, a slight detour is made for the campaign detailed further in White Dwarf #461 Flashpoints: The Charnel Kingdom which was a pleasant surprise to see. Ultimately, the Flesh Eater Courts won the engagement, and the Ossiarchs found a large supply cut off.

Initially, it appeared Teclis and Tyrion would not be coming, they were called away to other realms, rumored to be fighting Archaon. The battle shifts when Teclis arrives and fights Nagash in one on one combat in the mountains overlooking Ymetrica. The battle appears to be in Nagash’s favor, with thousands of years more of experience and magical practice on hand, Nagash was a powerful sorcerer. They traded blows for a time, until Nagash grabbed Teclis by the neck, ready to end his existance forever.

Teclis was only saved by a plot he set in motion when he allowed humans to come to Settler’s Gain. The Light-engines of Settler’s Gain took aim at Nagash and fired, the collective light energy, combined with the Aetherquartz of all the Lumineth present, were strong enough to destroy Nagash’s body. While Nagash’s soul did escape, the nine books of Nagash were destroyed, and the effects of the Necroquake were silenced.

After Alarielle drops further hints to Teclis of things to come. She asks him if this was all worth it, even knowing the cost. Teclis insists it was.

Anyone thinking that Games Workshop had blown everything with Morathi was surprised to see this book possibly topping it. A lot happens here, the most notable events include:

I remain greatly impressed with Broken Realms and Games Workshop has been killing it with this campaign. I’m very excited to see where Be’lakor takes things, as so far they havent held back on massive, realms shaking stories. Look out for Be’lakor review coming soon!

What do you think is going to happen next in Be’lakor or Kragnos? Have you been enjoying Broken Realms so far? Let us know on social media or email us at contact@goonhammer.com!