When Warcry was initially announced, players were unsure of what to expect. Many assumed it would be Kill Team set in the Mortal Realms. Others thought it might be the reimagining of Mordheim, a narratively rich game set in the Old World. What we got is Games Workshop’s fastest, bloodiest, and most cinematic game to-date.

The narrative begins before you even start playing. Warcry features an innovative deck-driven method of setting the stage. The first deck determines how to arrange the terrain on your board. A shattered city’s worth of terrain comes in the Starter Set, and there are already a few terrain boxed sets available for sale. Each comes with a board, some plastic scenery, and a deck of terrain cards. Those cards display how you should set up the terrain for the coming battle. A few are symmetrical and recommended for matched play, but most provide a dynamic backdrop for battles. Your board may show a defensive fortress with a clear demarcation for outside the walls vs inside. Another card may evoke a sacrificial site of ritual importance. 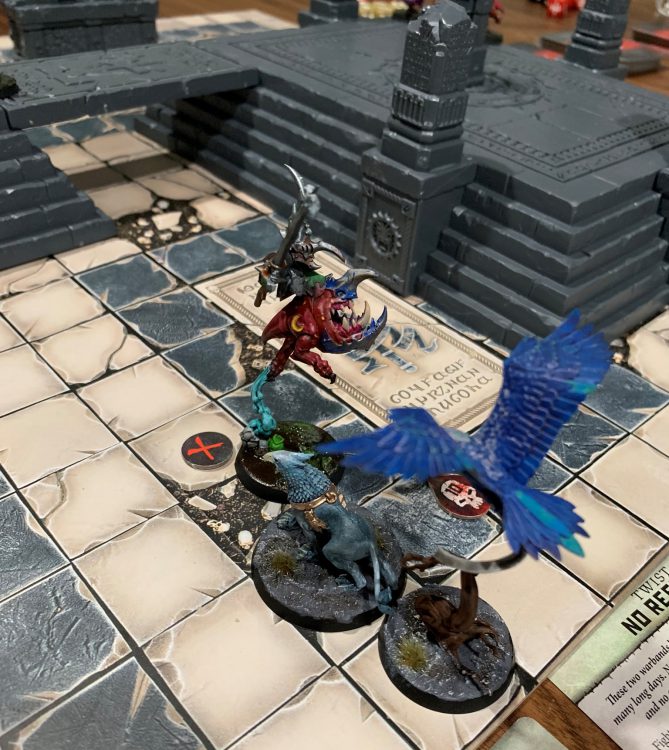 Following terrain set-up, you’ll move through 3 more decks of cards. A Deployment card will show where your models are set up, and if some won’t arrive until later rounds. The Scenario comes next, determining what you’re doing and how you’ll win. Finally a Twist card layers a boon or complication onto the bloody proceedings. Perhaps all fighters are bloodcrazed and attack more aggressively. Or, maybe the blood-rains of the Bloodwind Spoil (there’s a lot of blood) have soaked the ground making movement more difficult. There are even roaming monsters – an element lovingly inspired by games like Frostgrave – that can be leveraged to harass your opponent. There are literally millions of unique combinations.

These 4 cards form the narrative backdrop for your game. In one game I played, my opponent’s goal was simply to escape the ambush I’d set for him. I chose a board edge and he had to move at least half of his models off that edge. Complicating the issue was that mucky bloody ground; any fighter who began their movement on the ground lost a full inch of movement. Because of the asymmetric deployment, the ambush was sprung with my fighters on elevated catwalks or ruins with his beginning mired in mud. Further making things difficult was the fact that more than half of his fighters wouldn’t even enter the arena until future rounds.

Warcry is a game of alternating activations. A fighter is chosen to activate and must perform 2 actions: Move, Attack, Disengage, and Wait. Given that two of those actions relate to moving around and one involves literally doing nothing, it’s safe to say that Warcy is both uncomplicated and simple to learn. Each warband has access to some additional special abilities, but for the most part the rules get out of your way and just let you start playing. With those options available to us, our story began.

My opponent darted towards the exit, trying to stay as close to the edge opposite my fighters as possible. I leapt across the ruins, jumping from wall to walkway trying to avoid landing in the mud for as long as possible. Movement in Warcry is dynamic and freeform. Fighters can climb, run, and jump seamlessly and easily. Where some games may make climbing difficult (costs 2” for every 1” climbed) or add complications to jumping (must move 1” on a surface for every 1” jumped), Warcry does away with all that. What’s lost in verisimilitude is gained in badassery and speed. Your murderous deviants will crawl all over the board like manic fire-ants that wield spears and flensing knives. 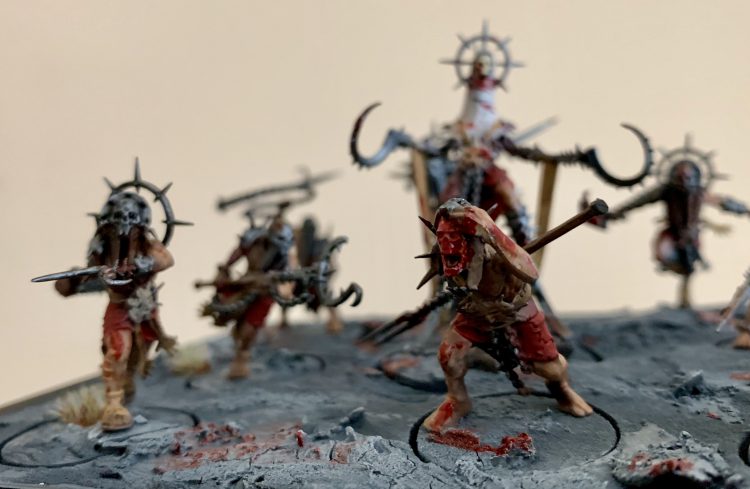 The Unmade wear their own faces as belts. Credit: Raf Cordero

Attacking is similarly quick and brutal. Warcry eschews the Hit/Wound/Save system familiar to a Games Workshop product, in favor of one that is much simpler and much bloodier. A fighter’s weapon will have a number of attacks and a strength. Roll 1 die per attack and check for a target number. The target number is based on the attack’s strength against the target’s toughness, and a 6 is always a critical hit. This system is simple and – most importantly – exciting.

Unlike Kill Team, fighters have a lot of wounds. Also unlike Kill Team, attacks will deal a lot of wounds. The Iron Golems’ bruiser has a damage characteristic of 4/8 on his hammer-hands, meaning that each successful hit deals 4 wounds with criticals dealing 8. Psychologically speaking, Warcry is a game filled with bloody successes. At the end of the day it may take the same number of rolls to eliminate an opponent in Warcry as it does in Kill Team. However, the simple attack system means you’re succeeding at what you’re trying to do more often than having to roll to Hit, then Wound, then Save, then special ability saves, and finally an Injury roll, all while watching failures occur along the way.

This contributes to the general feeling that there is always something awesome happening. Fighters are getting smashed, stacking up wounds like skulls on a trophy rack. Granularity in health means that there’s a rising tension surrounding each fighter. A warrior hasn’t simply gotten lucky and avoided dying thanks to inaccurate shots or strong armor; they’ve gotten hurt. Badly in many cases. When that fighter on one health throws caution to the wind, charges in knives first, and shreds an opposing fighter, the knowledge that they were clinging to life makes their victory all the sweeter.

Back in that game I played, this is exactly what happened. My opponent’s Untamed Beasts were taking blow after blow, Disengaging and running away in equal measure. Their goal wasn’t to fight back – it was just to survive and get the hell out. My game was one of positioning and brutal attacks; his was one of tactical movement and abilities. A pool of dice rolled each round determine both initiative and what special abilities are available to each player. I used bonus attacks and extra damage, while he aimed for additional movement. One of the Untamed Beast models features a javelin that can be used Mortal Kombat-like to pull fighters towards you. In this game he used it to pull my fighters off the wall and into the mud, neutralizing my elevated terrain advantage.

He would ultimately win this game without ever killing a single one of my fighters. His final deployment group entered the fray on the board edge completely opposite the escape edge. I thought for sure I’d win. Instead, he ran his leader up the stairs and cashed in two dice for an additional inch of movement. He then leapt around my fighters, landing on the top of a couple isolated pillars to completely avoid the screen I’d set. We could practically see the ruins cracking under his weight and hear the booming sound of his landing. Anyone I had that could have intercepted was engaged in battle and couldn’t get to that leader fast enough. My bloodlust did me; his Leader sacrificed half his warband to my squad of serial killers and lived to fight another day. 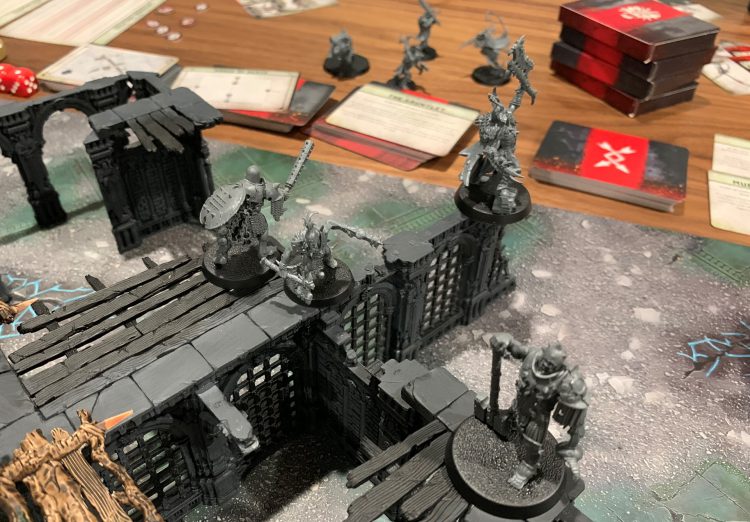 The cinematic narrative bubbles closer to Warcry’s surface than any other game in Games Workshop’s catalogue. This is due entirely to the simple rule system. All of the systems get out of your way and give you the good stuff immediately. Movement is fast and uncomplicated. Combat is plentiful and visceral. Warcry is a game where cool shit happens from start to finish. How many games have you played where you can deploy in melee range and just start whaling on someone with a poisoned blade with your first action? Zero, probably.

To be fair, the reliance on single rolls for combat can lead to games where variance shreds you harder than your opponent and maybe the Age of Sigmar warbands are a touch more powerful than the new Chaos warbands which are meant to form the core of the game. I’ve heard the criticism and seen what a well-played Stormcast warband can do. I also absolutely do not care. Every game I’ve played has been such a fast-paced revelry of dice and movement that I hardly notice. Besides, the deck-based setup generates scenarios that could shift that balance in the flip of a card.

Warcry is a phenomenal game; it combines modern skirmish design with Games Workshop’s always-awesome narrative to create a cinematic experience that hits with all the power of a raging cultist with actual hammers for hands.