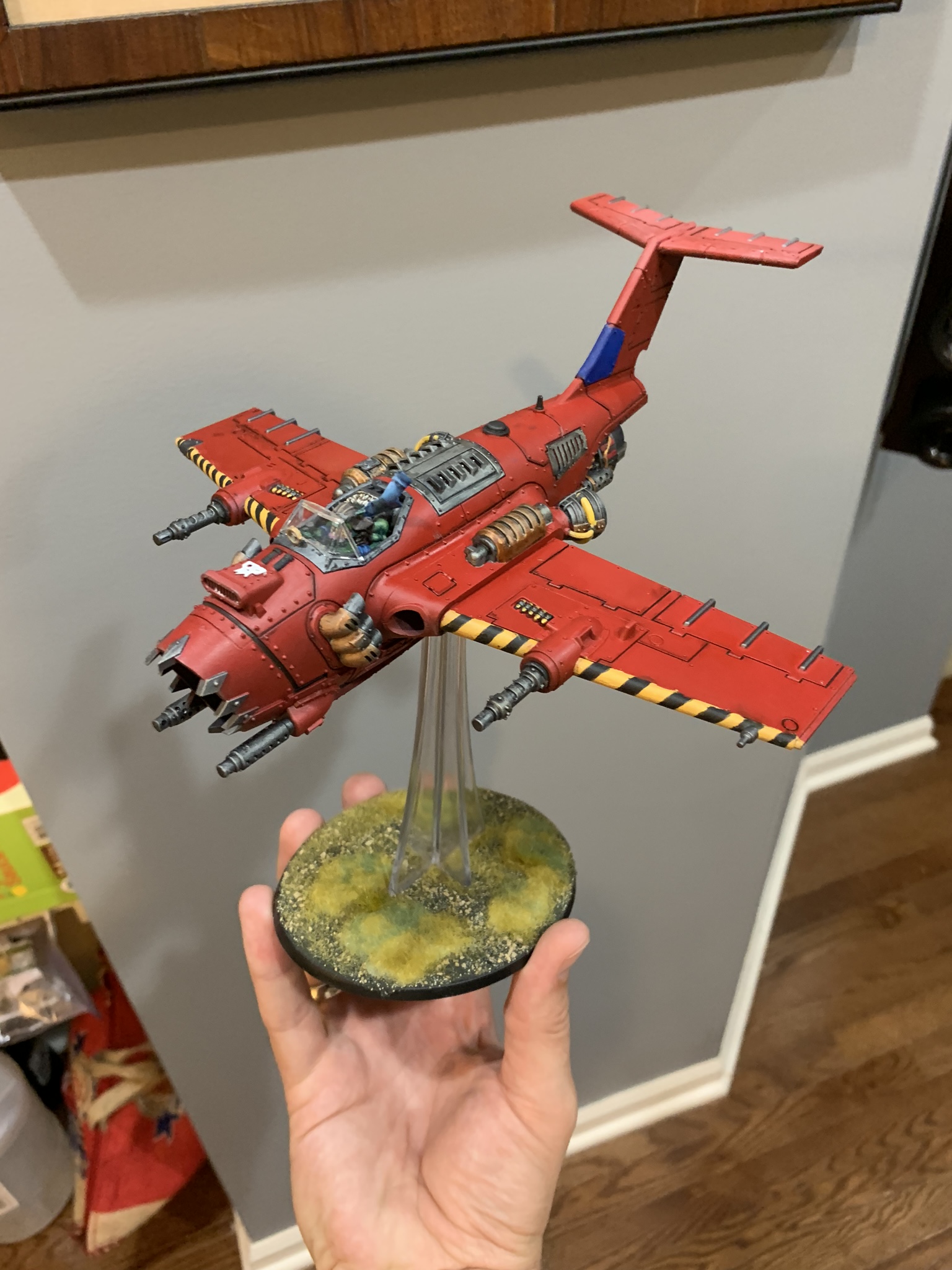 I can confidently declare that 2019 was my Year of Warhammer. I started logging all of my tabletop game plays using the BGStats app about 4 years ago. It helped me keep track of what I was playing which in turn helped with the game reviews I was producing for my podcast and various written outlets and had the added benefit of providing an annual snapshot. For the first time since I picked up Dark Imperium, Games Workshop games made up all 5 of my Top 5 played games. 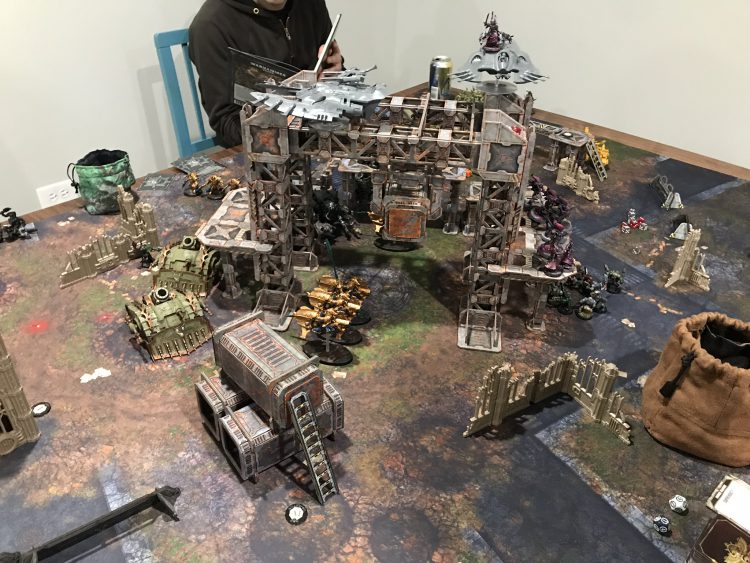 2019 started out with a gross, Nurgley, bang. My local Warhammer store wrapped up its 3-month campaign; the final match was between my Death Guard and my opponent’s plasma-toting Guardsmen. I won a close one; many of my matches throughout the campaign came down to some help from the variable game length aspect of many of Kill Team’s scenarios. 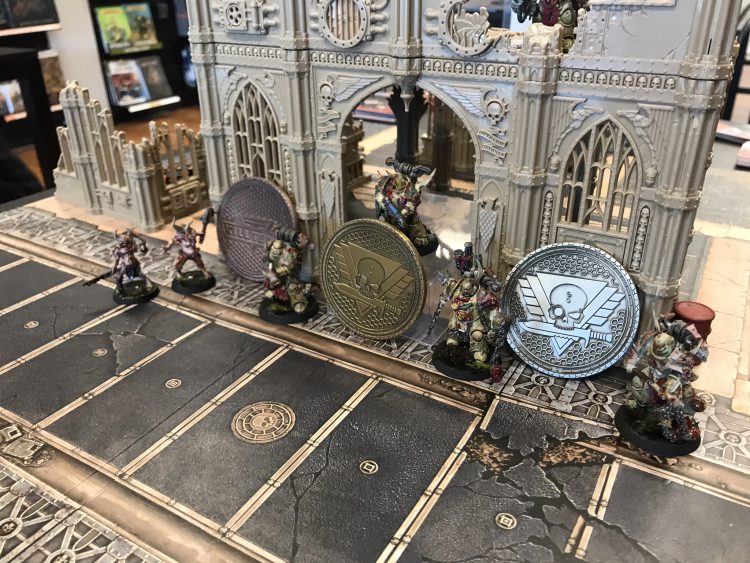 Following the campaign, I shelved my Death Guard in order to move on to a new squad. In picking my next force I wanted something that would be easy to collect and paint; Necrons it is. Because I had some work travel in the early parts of 2019 I decided to see if I could avoid forced networking and get these painted in a hotel room. For the most part it worked! The simple color scheme and general ease of painting Necrons made for a quick paint job. I did lose one Flayed One to the hotel, unfortunately. 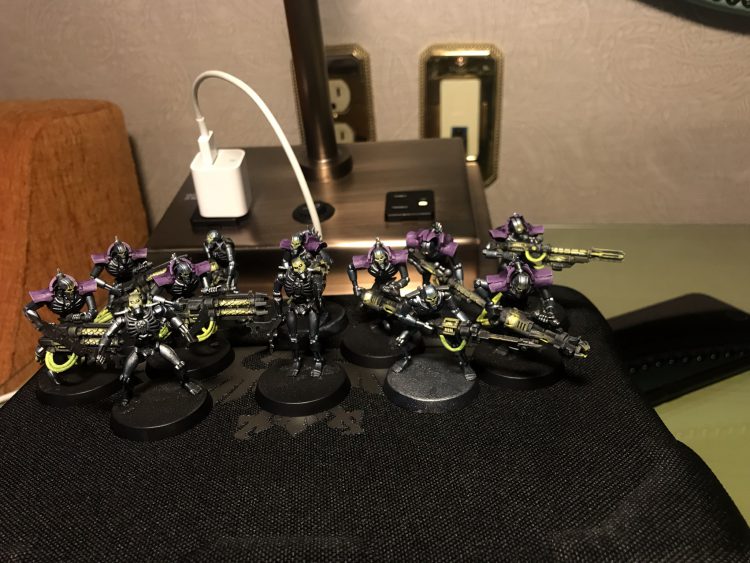 Throughout the course of the year I would flesh out this Kill Team to include a Commander and various Elite choices. A decision I would come to regret as I’ve found I don’t particularly love playing Necrons. That’s what I get for painting before I play right? The low-model count means they don’t feel all that different from my Plague Marines and I’ve found myself trying to decide if I want to unload them.

Going into 2020, I’m still eager for more Kill Team. I have plans to make an Imperial Guard force based on one of the short stories in the Black Library Horror Anthology Maledictions and to continue building more TinkerTurf terrain. 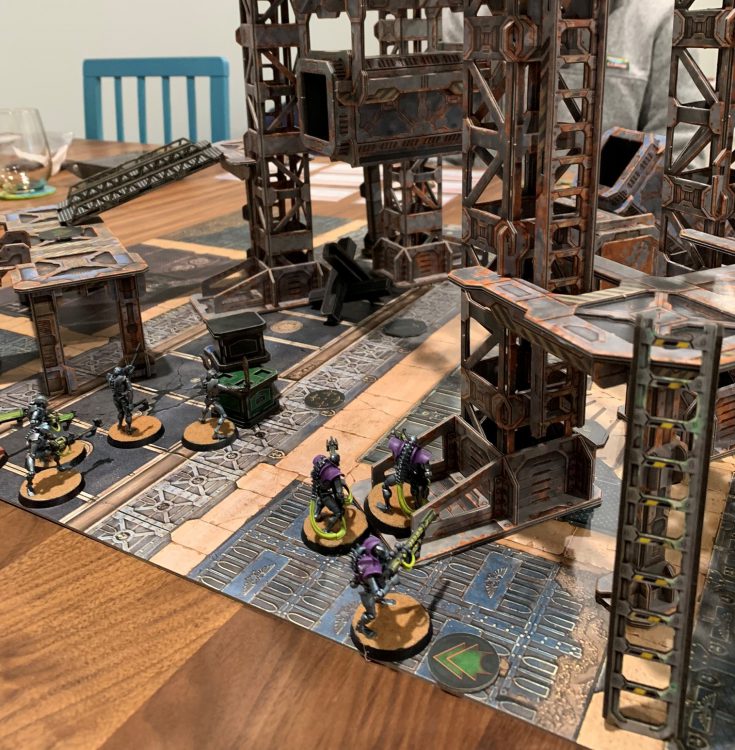 2019 saw me kick off a Blackstone Fortress campaign with a buddy of mine. We opted to each control two characters knowing it would mean we’d get to play more often than trying to wrangle a group of 4. BSF landed with a splash, but subsequent releases haven’t made as much noise as I’d have expected. It takes a few combats to wrap your head around all the rules, but once this game gets moving it’s a brisk and satisfying dungeon romp. I particularly like the way it abstracts narrative beats with the Challenge Cards; it means combat scenarios can be rich and punchy as they don’t have to bear the weight of too much exposition. 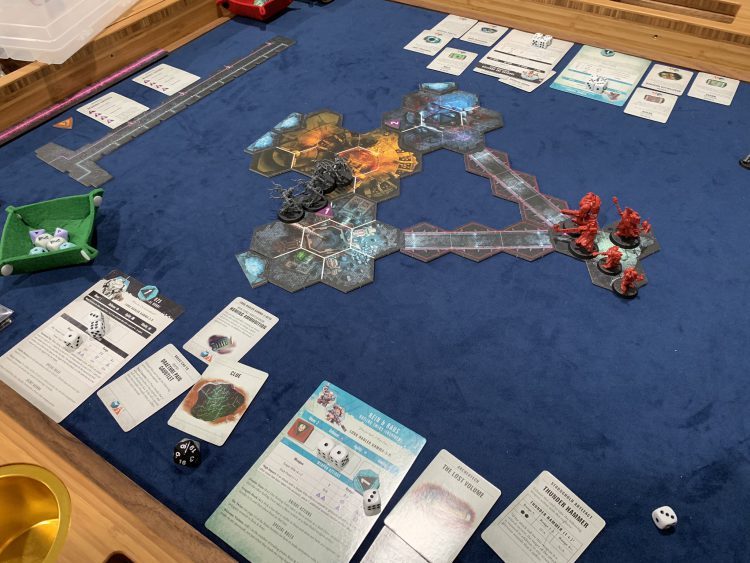 Unfortunately, I haven’t painted anything for this and don’t imagine I will in 2020 unless I decide to mine it for models to use in other game systems. We’re about halfway through the campaign included in the box and are going to figure out how to smash the Dreaded Ambull campaign into the middle. After that, who knows.

My first brush with Games Workshop came via the 2008 MMORPG Warhammer: Age of Reckoning. My main character was a little Squig Herder and it led me to pick up the old Fantasy Battles Battle for Skull Pass starter set. I never did paint everything in it, and I also never played any games. I graduated, moved, and my minis and brushes gathered dust. I never forgot about those models though and when GW announced the Gloomspite Gitz army I immediately jumped at the chance to pick up where I left off. 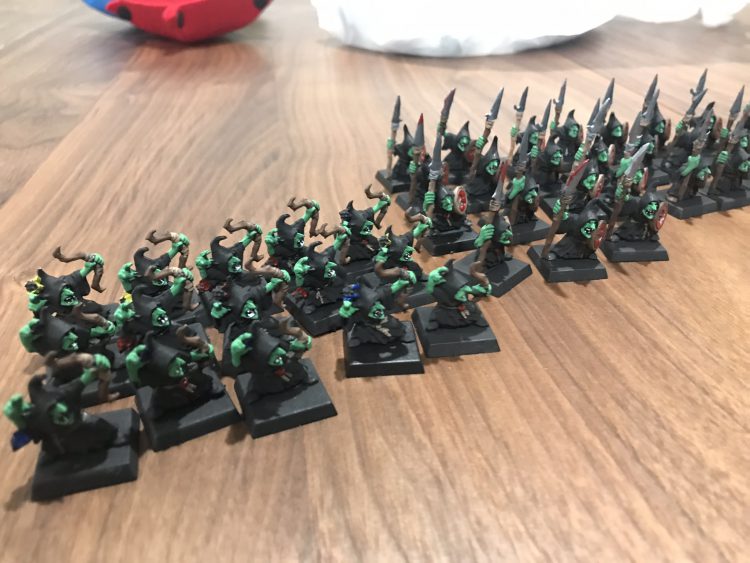 The local Warhammer store started an Escalation League shortly after the launch of the new Gitz line and I used it as an opportunity to build out and paint a force. For the first half of the year, things went great! I painted up about 1,000 points including a Mangler Squig model. Progress stopped when Warcry launched (what do you want from me?) but I picked it up again at the end of the year. One of the things I’ve loved is coming back to old models. I spent about an hour per model making the mess on the left hand side of this picture. The repaint on the right took 6 minutes. 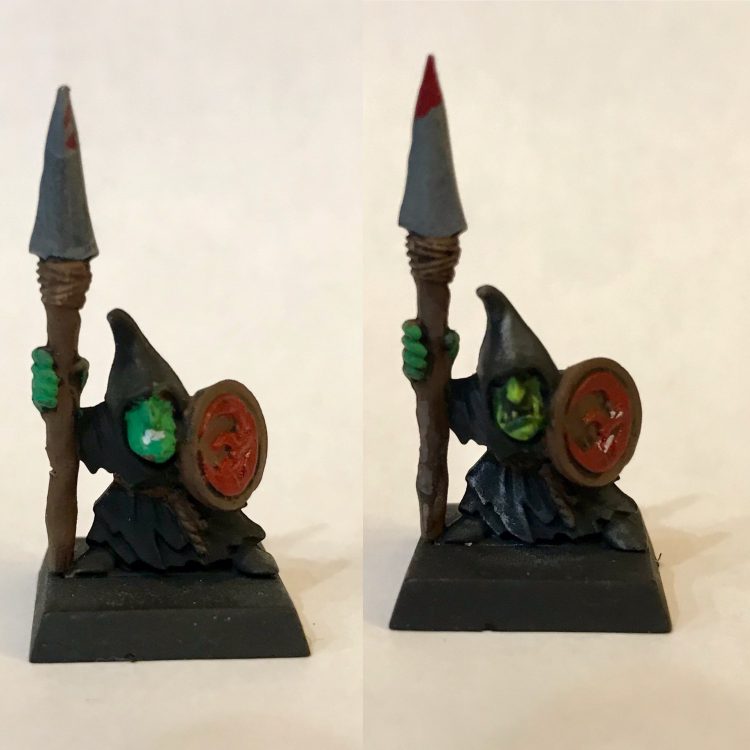 Escalation was a great way to learn the AoS ropes and figure out how I wanted to play the army. When it first came out, I just bought the stuff that looked cool and dragged my old grots out of cold storage. After a few games, I realized I wanted to have a roughly 50/50 force split between squigs and goblins. That makes the Gobbopalooza less-than-great but it did make room to create the kind of janky combo I live for. With Sneaky Snufflers, Puffshroom Fanatics, and a Loonboss, I can give my ball of 60 Grots 3 attacks that deal a mortal on a Wound roll of 6. Is it good? Surely not, but it will be fun. 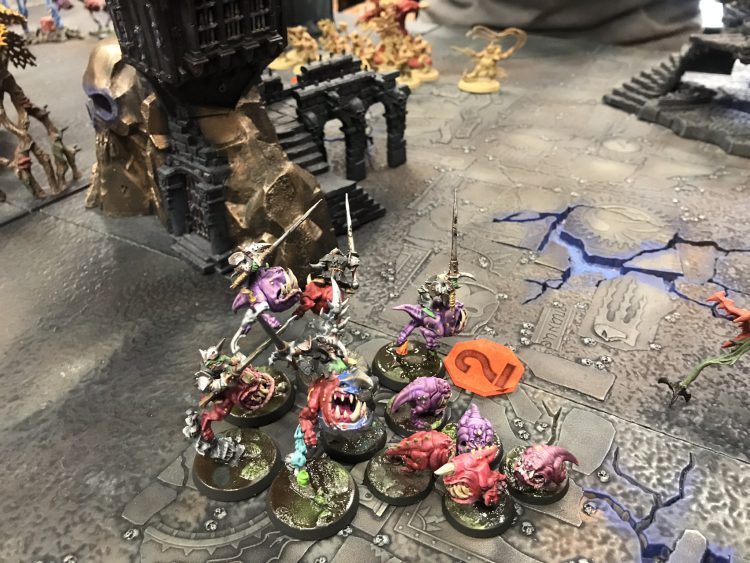 I also tried the White Dwarf rules for Skirmish mode that came out just prior to Warcry. They were…ok? It’s basically regular AoS only each model is a unit. That can create some weirdness with abilities and rules. It ultimately didn’t provide enough to make me want to play again once Warcry came out.

For now, my 2020 painting goals with Age of Sigmar are the same as my 2019 painting goal: finish a 2,000 point army. I’m close – very close – and there’s a force of Deepkin waiting in the shoals for when they’re done.

I only got one game of AI in during 2019, but I did use the core set as an opportunity to work on my airbrushing technique. Inspired by Dana Howl’s vaporware aesthetic, I went purple/teal with my Imperials to stand out against my more traditional Ork scheme. 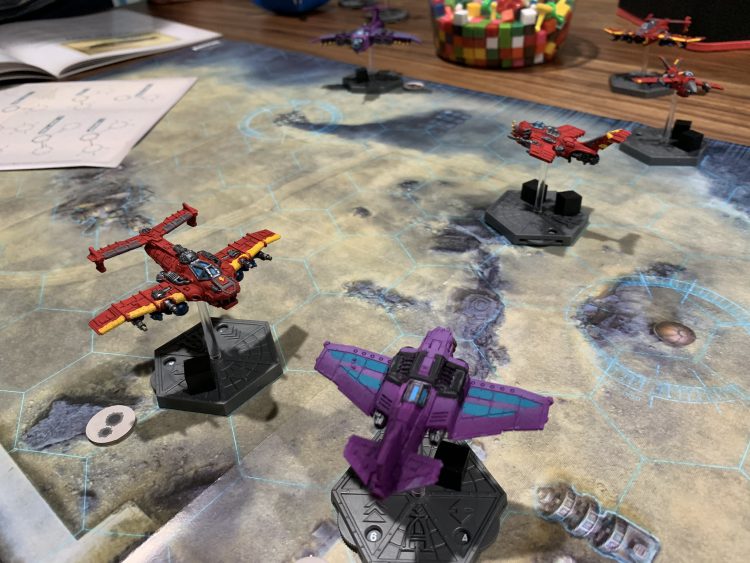 AI is a game I’m excited about. I got a couple boxes of Ork reinforcements for the holidays and plan to build out that squad for more games in 2020. Hopefully we see some new armies this year and interest picks up at the local shop as I’d love to get more games in.

Now we’re getting into it. Between a store league and a bunch of basement games, I played lots of Warcry last year and loved every minute of it. It’s dynamic af and plays so quickly. I currently have the Unmade built up and ready for games, and plan to add the Corvus Cabal in 2020. 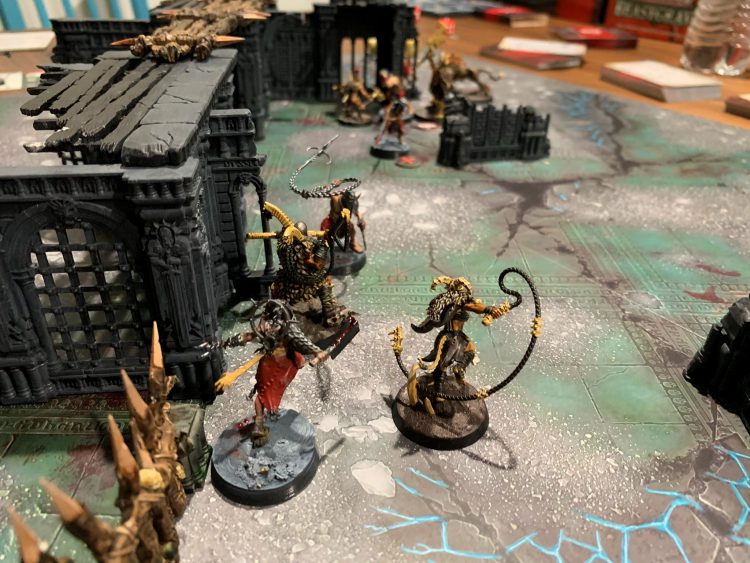 The Joyous One outflanks the Untamed Beast

This was a fun project to tackle, especially with the constraint of getting it painted prior to the league starting. I tried to push myself to learn new techniques all through 2019. With the Unmade, I decided to try airbrushing as much as I could on these models. They don’t look great but given that the only non-airbrushed parts of these models are the little stitches on their murder-skirts I’m pretty happy with what I was able to pull off. For anyone wondering, the base comes from Z-Axis Hobbies. I’ve got one set aside for the Cabal as well.

I expect to play lots more Warcry in 2020; the new campaign additions released in the book expansions at the end of 2019 are awesome.

Finally, we come to my most-played game of 2019 and the game that brought me to Goonhammer in the first place: Underworlds. I’ve been a huge fan of this game since it came out and kept playing and painting throughout 2019. The big release in 2019 was – of course – Beastgrave. I think it’s the best of the starter sets yet meaning it’s the perfect time to get into this game if you haven’t. 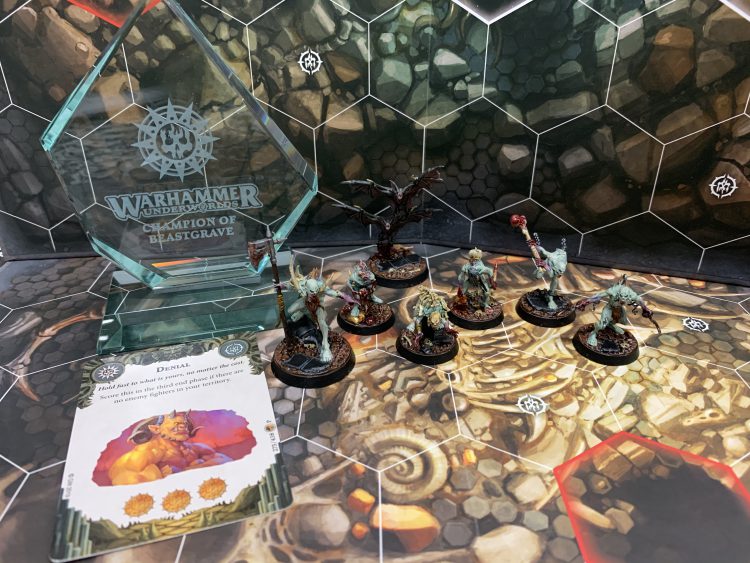 I’d point out the Best Painted card, but we don’t like to brag at Goonhammer. Credit: Raf Cordero

As far as gaming highs go, it didn’t get much higher in 2019 than taking home some Shadeglass at a local store tournament. We have a decently competitive scene in the area; I had some tense games in the tourney. The Grymwatch are absolute monsters – more details in this article – and I was able to ride their aggression to victory.

My painting highlights for the year are my Grymwatch warband and the Profiteers I painted up for my good friend. While I painted the ghouls with traditional techniques, the Profiteers were painted almost entirely using Contrast paints over bright metallics. I played around with Contrast a lot last year, and these make up for my disastrous attempt to make my own using Dry Brush Paints and medium. Sorry Mollog, I’ll fix it one day. 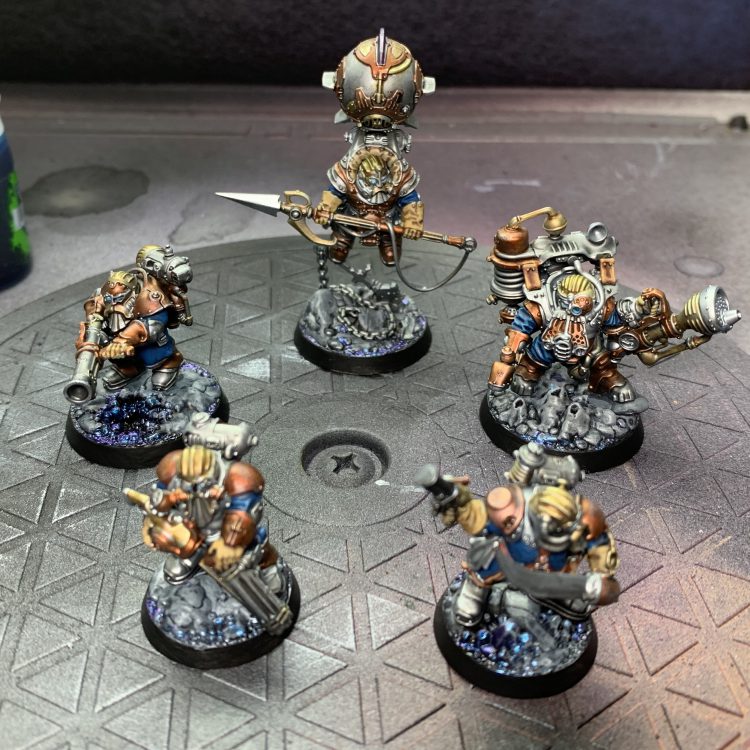 With 2019 now firmly in our rear view mirror, I’ve started looking ahead to what I want to accomplish in 2020. For starters, I definitely need to finish that Gitz army. I’m too close to give up and am honestly very excited about the prospect of having a fully painted 2,000 point army. I’d also like to paint up another Warcry warband and another Kill Team, so that if I do get rid of my Necrons I’ll have 2 squads for each game.

More philosophically speaking, the sheer volume of releases and games played in 2019 meant that I spent a lot of time speed painting and trying tricks to make my painting go faster though not necessarily look better. In 2020, I’d like to slow down and really see what I can do if I spend a lot of focused time on my models. It might mean getting less done, but I’m curious to see what kind of detail I’m capable of this year.

Finally, 2020 is bringing something exciting to my table: Mordheim. My brother in law has dusted off a bunch of models he hasn’t touched in 12 years and we’re planning to play Mordheim over Thanksgiving. Neither of us have played it, and it’ll involve tracking down some rules online, but I’m pretty excited to kitbash some Witch Hunters and play this classic.