Carrion, or, How a Secret Government Facility Earns a Michelin Star

What’s the most you’ve ever eaten in one sitting?

Carrion is a game of consumption and corruption, the story of what happens when man digs too greedily and too deep, finding only– alright, fine. It’s a game where you play a movie monster that bounces around the screen like a cross between a cancerous tumor, a loogie, and a pinball, chomping down on screaming scientists and security guards who start out unaware that the creature their facility was built to maintain has escaped…and quickly become very much aware. They gain the kind of awareness that, say, comes with flamethrowers.

Developed by Phobia Game Studio and published by Devolver Digital, Carrion is a narrative inversion of the premise of most closed-facility horror genre media — you’re the monster stalking the halls, instead of one of the doomed little fools running away from it — but calling it a “reverse horror” game as the studio itself has billed the title is perhaps a bit too much. It is technically true, of course, because a game that reverses the premises of a horror game is a game that reverses the power relationship between the viewpoint character and their antagonistic harrier, making the viewpoint character the prime mover. But that means that a reverse horror game is just…a power fantasy. And while that’s really nothing new, it turns out that hey, Carrion is a good one of those with some neat innovations.

None of them are on the order of creating a new genre of game — this is one of those whatever-you-want-to-call-thems, retro Metroidvanias or 2D adventure platformers or open-world traversal games. You’re plopped onto a map mediated into a series of screens viewed from the side, and can go in any direction you please if and only if you’ve acquired the item or upgrade (or in this title’s stylization, genetic mutation) that allows you to solve the particular traversal puzzles blocking off progress. These blockages are standardized and power-specific, such that there’s exactly one obstacle for each power and the visual grammar makes it clear what you’re supposed to use where. To the extent that The Creature from Carrion is different from, say, Alucard from Castlevania: Symphony of the Night, it is in the fact that the developers have made an extremely interesting choice for a platformer: they’ve eliminated the jump. There is no jump button.

That might initially leave you inclined to panic — how are you supposed to traverse a dungeon in a Metroidvania if you can’t jump? — but the key here is that you’ve been unshackled rather than further hobbled. The Creature has no arms, so it cannot climb and no legs, so it cannot jump. It is just one big roiling mass of biomatter. And so to get from place to place, it shoots out a bunch of thin, powerful tentacles and hauls its mass around the screen. As far as you the player are concerned, The Creature just streams through the hallways and caves of the facility, squeezing through tight spaces and expanding to fit large ones, completely unconstrained by concerns for gravity, looking for people, because people are food.

This part of the game is well-worn and intuitive, as it should be for a genre piece: you’re a monster that consumes organic material to get bigger, so the more people you eat, the bigger you get. The bigger you get, the more hitpoints you get, obviously, but there’s a bit more depth to the system than that; The Creature has size tiers, from Small to Large, and each tier has different abilities tied to it — to complete certain puzzles, you’ll have to go back down to the Small version of The Creature, because that’s the most nimble form that’s best able to, say, manipulate a switch through a grate. The larger forms of The Creature are of course best for applying brute force to barricades and guards alike, but as you might expect, quite often you’re at a disadvantage trying to charge in head(?) first — you’ll want to sneak around and snatch enemies from behind, or strike and retreat before being struck in return, and so on. You know, video game stuff.

One of the game’s biggest disappointments is also related to video game stuff; namely, there’s no map. This is intentional rather than some kind of oversight. The developers are clearly going for as little UI as possible and no menus; the only thing you get from the start and back (or select, or whatever it’s called on your controller) buttons is the basic options/save/quit screen. Again, it makes sense. The Creature doesn’t use tools and doesn’t have an inventory; all of your upgrades are expressed as mutations, and the game just shoves those in the corner of the screen. But a map is a tool too, and a rather necessary one when exploring a dilapidated facility built on ancient ruins where things always look quite samey. After clearing an area, I’d routinely spend a good five to ten to sometimes fifteen minutes wandering around the parts of the facility I’d unlocked, hoping to run into a place where progression was now possible thanks to a power I’d acquired, with no way of even mentally marking these places on a map I could call up. There is an Echolocation power — you start the game with it — but instead of giving you an objective point to head towards (which would also be an aggravating compromise for different reasons), it mostly just alerts you to the save rooms that are nearby.

The other main gripe I have with Carrion is narrative. From time to time throughout the game, you’ll run into what appear to be some kind of genetic memory regression machines that The Creature can seep into and activate in order to see the past. These are mandatory vignettes that gate plot progression, and in gameplay terms what they entail is that you stop playing The Creature and start playing a flashback of some lead scientist investigating the ruins where The Creature was discovered or created and where the facility was built and then rebuilt. There’s no real text here, just some environmental storytelling, but to cut to the quick: I do not care about The Creature’s backstory. I know The Creature’s backstory: it was contained in a lab, it got mad, it got free, it’s going to kill everyone and escape. That’s the genre shorthand being channeled here. I don’t need the specifics on how it came to be in that test tube, and I certainly don’t need to be spoonfed those specifics while playing a human who moves at a snail’s pace and has to climb up and down ladders. There are times when it is appropriate to make the player eat his vegetables; this is not one of them, and the veggies don’t really have any substance anyhow. 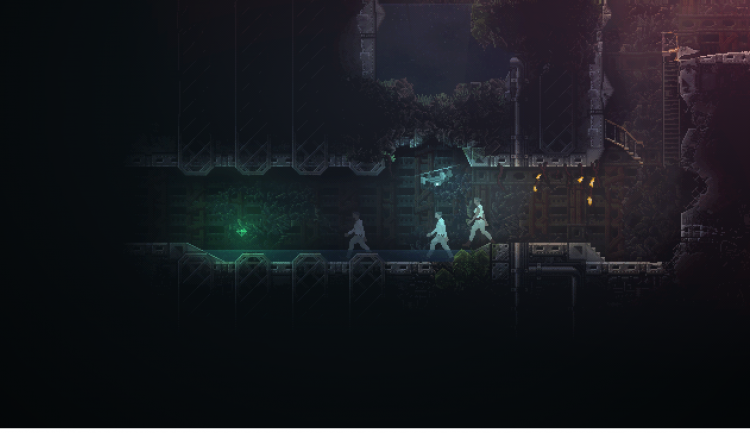 Carrion’s a pleasant game and a fun little experience; you’ll probably put five to six hours into it and either beat it or decide to move on to something else. It definitely moves and controls like little else you’ll have played in its genre space, which can be both exhilarating when you’ve got it working for you and frustrating when The Creature isn’t doing what you want because you released right trigger instead of continuing to hold it while laying off the right thumbstick, for instance (and yes, I would go with the controller option over keyboard and mouse). It’s not much more than that, but it doesn’t need to be much more than that, and I think it succeeds at what it tries to do perfectly. Now if you’ll excuse me, I have a flamethrower man to drag underwater and eat while he’s drowning.

The $20 price point is absolutely perfect for what you get in this package; this is one of the relatively rare titles where if it was at $30 I’d say wait for a sale, but at $20 performs well enough for me to say just pay the people their money and play a good game.