Welcome back to Catching Snowflakes, our series of tactics articles covering the less popular or prolific factions of Infinity. In this week’s article we’re talking about Dashat Company.

Today’s ‘snowflake’ is going to buck the trend somewhat in as much as while it seems to be a lot less popular than it used to be in N3 that doesn’t necessarily mean it’s a bad or underpowered faction. Dashat Company is certainly a very different beast to what it was in N3 but it’s pretty hard to bollocks up a faction with foundations as strong as this. Settle in, dear reader, as we wet our fishman gills, deploy Forwardly, and get Hyper-dynamic… 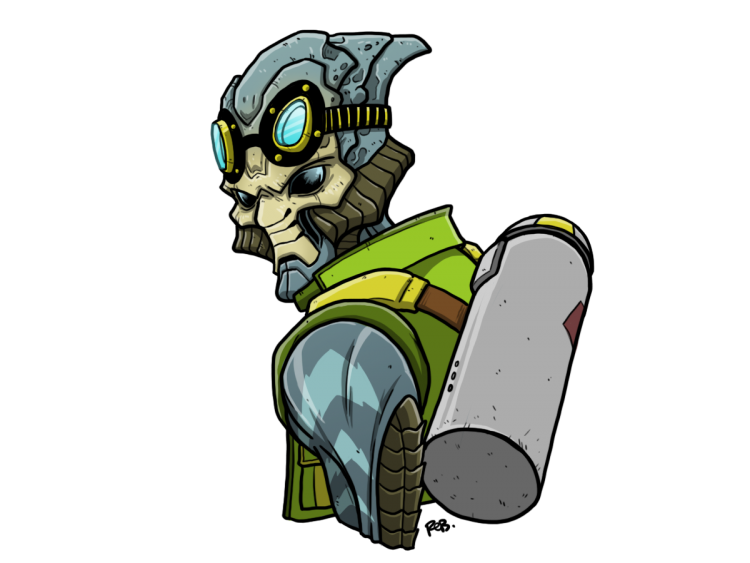 Authorised Bounty Hunters as AVA 4 Wildcards. Yeah, that’s an advantage. That is all. You can stuff whatever linkable premium attack pieces you want into a Fireteam and then fill it up with ABHs and you’re golden. Heck, you could run a ZuYong HMG (with Tactical Awareness) followed by four ABHs and that’s legit as hell. Every ABH comes with re-rollable Booty (there’s a joke there but I’ll let it go) so the chances of rolling something amazeballs is, like many probabilities, more than zero and less than one.

For an NA2 faction, especially one rated as a Snowflake faction, Dashat has a surprising degree of access to both cheap and mid-field/marker state specialists. Ariadna brings the cheap specialists (112, bike-mode and foot slogger, as well as the Dozer) while Haqq and YJ are bringing your mid-field players (Hunza-cutie, Zhencha, and arguably even the Hulang).

Quite possibly the high watermark for shooting in the game, a Rui Shi in a full fireteam: Core, in the right range band and with Assisted Fire hits everyone on 18’s. Everyone. Maybe there’s a counterplay outside of White Noise but fundamentally, these are the highest numbers you can get that your opponent can’t take away from you. That’s not just pants-on-head levels of crazy, we’re talking crazy ex-boyfriend sticking your hamster into a blender and then smearing the guts over your car’s windscreen, spelling out ‘Why won’t you love me?!’ levels of crazy*.

Excellent Irregular troops are a big draw for Dashat. With Kum bikers for cheap, disposable attack pieces with smoke, Hunzakuts as your budget-price mid-field specialists, and let us not forget McMurrough (AKA McDoggo) who, like Leroy Brown, is meaner than a junkyard dawg.

I’m going to call out the Libertos here. Sure, it’s an excellent Irregular troop (see above) but this is the only faction in the game that gets to drop two of these Rebel Punk Fishmen into a list. These incredibly cheap trading pieces perform double duty as both mid-field tarpits as well as exemplary skirmishers. They’ll strip the protective layers your opponent has wrapped around their most important assets, exposing them to attack from your own key pieces. At the price, they piece trade so incredibly well that you’ll almost always trade up, killing 2-3 times their own point value in enemy troopers. It’s not just borderline unfair it’s Amazon’s formal tax return levels of unfair. 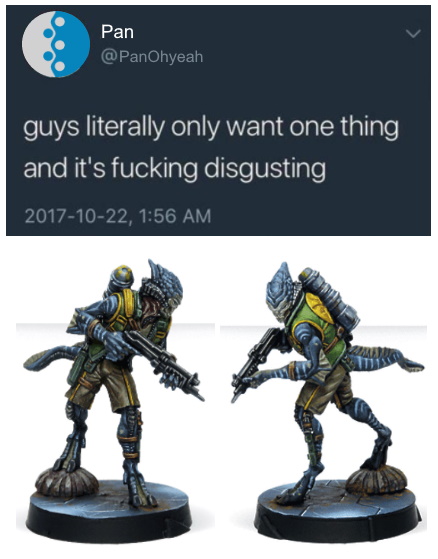 What’s a Killer Hacker Device? Valerya Gromoz in a ZuYong fireteam with a -6 Tinbot feels pretty good as a pretend-KHD but she’s not knocking anyone onto their ass with her ghetto ‘Hosaka Mark 1’ deck (how’s that for a Nerd-cred reference?).

Dashat also has limited access to solo Apex Predators. Almost all of the best of Dashat’s firepower is contained within (alebeit excellent) fireteams. This can make operating in the mid-field an issue, as navigating the mines, template weapons and other cheeky hazards that your opponent can easily throw around in that space can be quite unpleasant for a fireteam, particularly one that is filled with low Arm single wound troopers acting as back-up singers for your shooter. For those of you in the back seats: the Al Fasid is not an Apex Predator.

Both a blessing and a curse, balancing the number of amazing irregular troopers in your list with the Regular orders they need to push hard can leave you gassed out earlier in the turn than you might like. Dashat’s upper limit for Irregular troopers in a list is higher than most factions, with my estimate being 4 but even then I’d want a solid argument to go above 3. Which is a shame because there are so many good Irregular choices available…

Finally, because I refuse to let it go and it’s simply not a Chasing Snowflakes article without my merciless bitching about Lieutenant options, let’s discuss your options for The Boss. The WIP distribution hurts a bit: Brawlers on 12’s, Zuyong on 13’s, and Ghulam on 14’s. You’ll be telegraphing the unit-type that’s making your Lt roll, so it becomes a question of how many you put on the table (or if you commit to using Holomask, thanks Bashi Bazouk/Sforza, to hide their true location). It’s not the worst, honestly. If you’re cheeky you can hide the Ghulam Lt in a Fireteam: Core and have them act as a static firebase. You could even run the HMG Zuyong if you want a Rambo Lt. The Combi Zuyong is actually pretty cute for a 26 point, 2W Lt who can go ham in late game if needed. 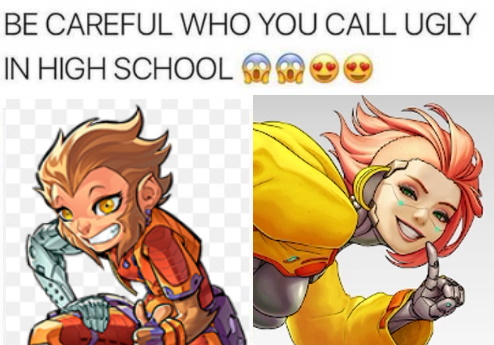 “No-one called you ugly, we went to the same highschool. Just post your pic and go.”

Someone needs to explain to CB what happens when your font choice and kerning don’t quite work out…With a recent update, CB have announced that Fiddler, everyone’s favorite transgender, transhuman monkey-girl (love her or hate her, there’s only one so I’m technically correct, the best kind of correct) is joining a few factions, Dashat included. She’s kind of amazing. The plays you can set up with those Jack-bots (as remarked by a competent player in my meta: There’s nothing in the game that wants to take 2-4 Continuous Damage shots at Damage 14. Nothing.). She’s a bit fragile for the point cost but the mobility, utility and hateful, hateful damage potential certainly justifies it. She’s about the same cost as a Hulang Shocktrooper and while they do different things you could certainly recognise that they offer comparable value to a Dashat list.

Any discussion about Fiddler isn’t complete until we touch on the absolute horrors that are Jackbots. As peripherals, you’re in a position where you can ARO-fork people quite badly. Round a corner with a Jackbot and your opponent can choose to either take 2x Continuous Damage template hits or try to face-to-face dodge a BS 17 attack at Burst 2. No thanks, bro. If you’re feeling really cheeky, you can respond to an ARO-BS attack with a Move and just slide your soon-to-be-dead Jackbot into a position that maximises the impact of their Explode rule. Fukken Yikes. Before you get too janky, though, make sure you’re across the rules for Explode (particularly the No-blue-on-blue clause in the trigger conditions. Though, you can abuse this to ensure that KO’ed Jackbots are left in a repairable state instead of scattered across 20 square feet as red hot shrapnel.). You can also mix Fiddler in with the ARO forking. She and her Jackbots can take a corner and ask some hard questions. Just be aware that a canny opponent will, 9-times-out-of-10 try to kill Fiddler and shut down her Jackbots, as well. However, throwing a Drop Bear does count as a BS attack, so she can frisbee mines into nasty positions from safety while her Jackbots seek and destroy TERFs. 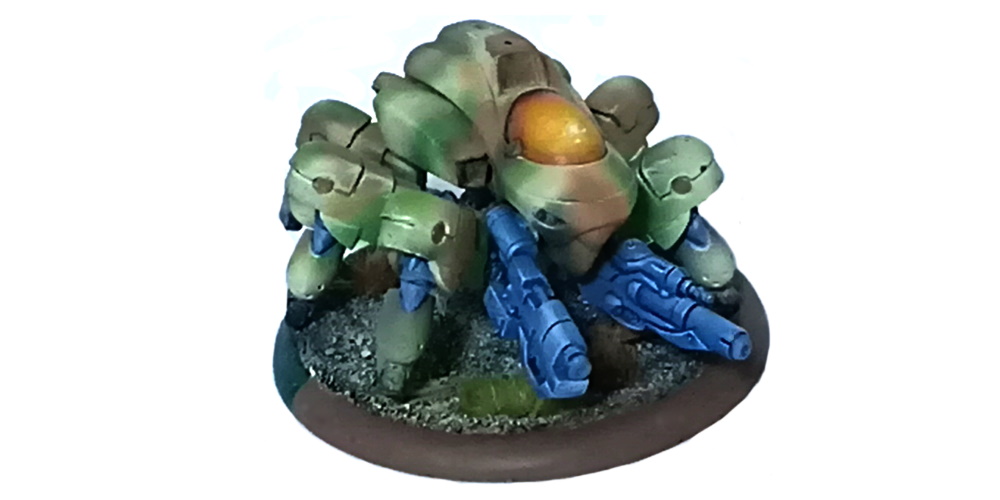 This list leverages the Maghariba as a rampart-sweeping piece in the second combat group. She doesn’t need a lot of orders on a turn by turn basis, as it doesn’t cost much to shoot down your opponent’s 1-2 ARO pieces. This leaves all of the orders in your primary combat group to be spent closing the distance with your opponent and tearing their throat out at point blank. Also, two Libertos because how could you possibly say no to multiple rebel-punk fishmen? Downside? Obvious Lieutenant but if they can push through your 2x Libertos, mines, Maggy on ARO duty and everything else, then maybe they deserve it.

You’ve got some lovely order efficiency in the fireteam, with two Tactically Aware Zuyongs and Valerya supported by a Tinbot -6 is a scary good hacker, sixth sense is just icing on the cake at this stage. You’re a bit low on Specialists but you’ve got enough to work with, doubly so if you kill everything your opponent puts between them and the objectives before they commit to the mid-field. We had to make some sacrifices to fit everything we wanted into the list, so the Maggy is the Hyundai Getz of loadouts but that’s OK, we only invited her to the party for her HMG, anyway. 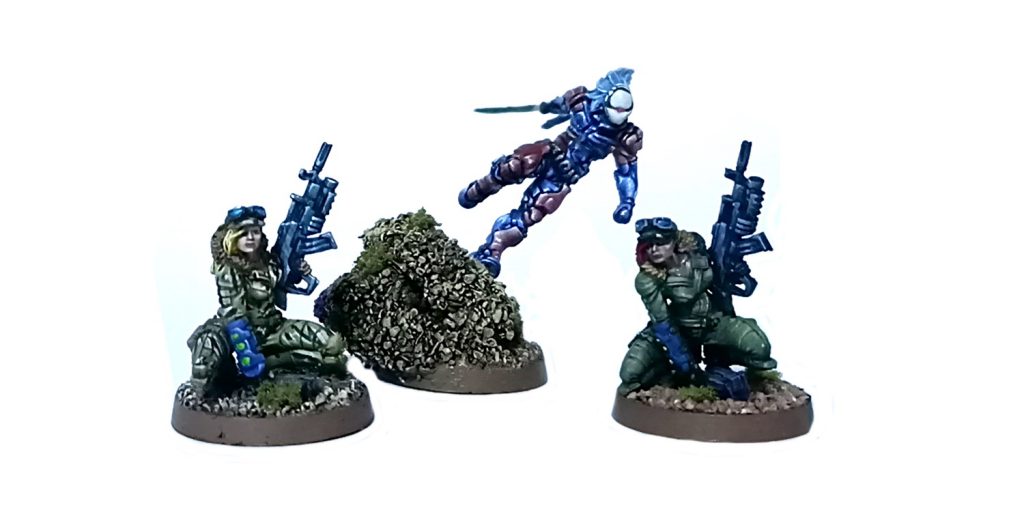 Well, we’re here. We’ve come to the point in the article where we have to put a Rui Shi into a full Fireteam: Core, throw in an EVO Hacker for Assisted Fire and politely inform our opponent that: “We’re hitting on 18’s. No, 18’s. Don’t argue with me.” Feels good, doesn’t it? We’ve also got the Zuyong Tacticool HMG in the link, not only because we need at least one Zuyong in the Zuyong Fireteam but also because the HMG rangebands give you something to work over any long range ARO pieces that would be in the Rui Shi’s -3 range band. Also, that Tactical Awareness order helps get you into a firing position a little more efficiently. You’ve also got a 4th Bounty Hunter in the combat group to let you roll more Booty rolls before deciding who joins the primary Fireteam.

Seeing as we’ve committed to the EVO hacker and the Rui Shi, we’re also going to throw in a Shihab (the Total Reaction HMG) and a Rafiq with Red Fury, who are both decent shooters that get nicely tuned up by Assisted Fire. We’ve also got Fiddler with 2x Jackbots (represented in the current Army Code by the Hulang) who can repair any Remote on the table with her two Nasmats or just hoon around and ARO fork enemies hiding around corners with her Jackbots. She’s having fun all day, every day.

We’re also being a tad cheeky with a few dark horse picks, such as Saito Togan who is, himself, partially hidden by the Bashi Bazouk (who is now allowed to Holomarker/Holomask as anywhere between 1-3 identical models, which makes shell games much more viable in N4). The ruse doesn’t last past the end of your first Tactical phase but you still get to carry it through Deployment and potentially your opponent’s first turn. Alternatively, that Bashi is a specialist Parachutist, which isn’t something many people expect from a Dashat list. Go forth and Boop those mid-field Buttons, friend. 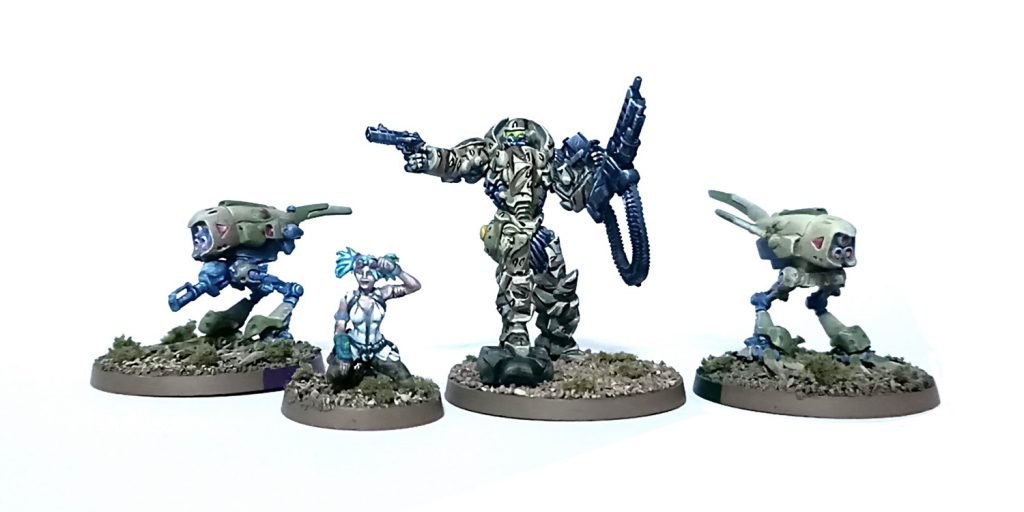 The limit to combat group sizes may have, on initial reaction, hurt Dashat but a rising (or rather, dropping) tide lifts (lowers) all boats, so the absence of swarms of Irregular skirmishers in your opponent’s lists means this is not the nerf that it appears to be as there;s less bubble wrap for you to chew through before you get to the sweet, juicy centre of your opponent’s list.

Next time we’ll take a look at a Sectorial that arguably does its best work when it’s not actually running any Fireteams. Heresy!

In the meantime, if you have any questions or feedback, drop us a note in the comments below or email us at contact@goonhammer.com.

*You don’t get to judge me. We’re meant to be together. Forever.

**This joke was always going to happen, just let me have this. Also, the past-tense of shit is shat, except when it isn’t.