Earlier today, Warhammer Community posted an article about the new “Combat Patrol” game format, which you can read here.

To briefly summarise, Combat Patrol is the smallest game size on the new organisational chart found in 9th ed:

The minimum board size is 44″x30″, i.e. two Kill Team boards pushed together. It’s designed to be a tight, frenetic affair with battles between small forces – perfect for lunch games or packing in multiple games in an evening. You only get 1 detachment to work with, but Patrols are a core detachment which let you keep their CP cost (revealed today to be 2CP) so you can take one of those with a single mandatory HQ and Troops choice, and then you still have a bunch of options for other things to take, even at 500pts. 3 CP might sound limiting, but don’t forget you still get a point a turn in the Command Phase, so you’ll be able to get more across the course of the game.

The newly-revealed Patrol Detachment, costing 2CP – unless your Warlord is part of it! Credit: Warhammer Community

Anyone who’s played 40k for a while will remember various kinds of game called “Combat Patrol” over the years, with a variety of different restrictions and adaptations designed to try and make it a viable way to play. Perhaps the classic version is the one from the 4th edition rulebook, where armies were 400pts, with restrictions on 2+ armour saves, maximum toughness of vehicles, etc.

The new version isn’t quite like that – or at least it doesn’t seem to have been revealed to be that way. You have a free choice to make your army out of whatever you want to, which from what we’ve heard from the designers is a theme of 9th edition. What is different is that there’s a new approach to the game size – as revealed on one of the earliest preview streams, there’s specific missions for specific points values, 3 of which are designed for this 500pt level. Included in the Community article is the first of these missions: 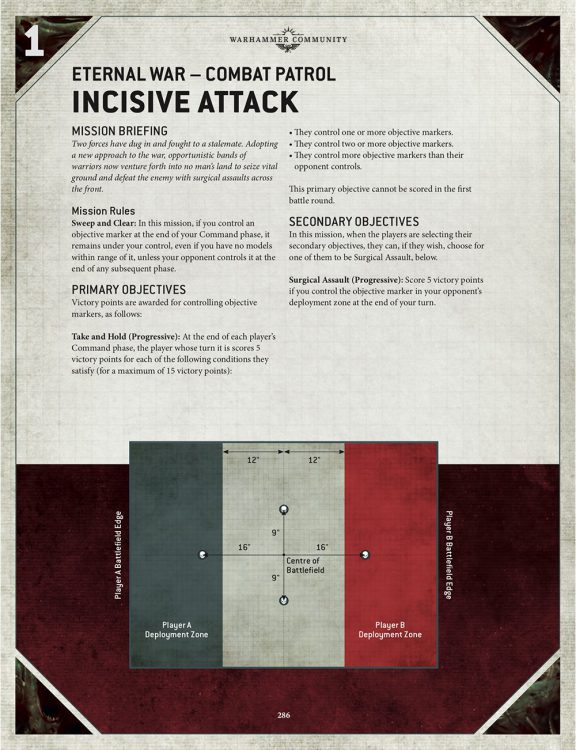 As you can see, this is a mission designed around the smaller board – the objectives are tight together on the 44″x30″ playspace. Objective holding is designed for a limited number of units – once you claim something, you hold it until your opponent takes it off you even if none of your units are on it, a bit like capping a resource point in Dawn of War. The actual scoring is similar to the Four Pillars mission we saw for the Strikeforce level for “standard” 2000pt 40k, with points for controlling one, two, or more objectives, but the “Sweep and Clear” rule frees you up to have your units actually do things rather than needing them all to stand around capping points, with your limited options even more limited by the need to score points. It opens up great potential for play and counter-play – do you leave an objective open, at risk of your opponent stealing it off you? Or do you camp the points and give up an opportunity to kill or charge something, hoping you can instead play a board control game? This kind of tactical play was quite often absent at small points values before. Like the other mission we saw there’s also a mission-specific secondary objective, Surgical Assault – 5pts for controlling your opponent’s objective marker. The fun thing here is to remember that with Sweep and Clear, you can continue to “control” this marker even if you’re not actually holding it with any units right now – so it’s very possible to do exactly what the name suggests, burst in with a unit and take the objective, and then move on from it while still racking up the points.

There’s definitely still things to think about with the points size. The article suggests that Knights are perfectly playable in Combat Patrol, for example. It’s not wholly clear what that means right now, whether you’re really intended to be able to take a full-sized Knight at this points level or if you’re going to end up with a set of Armigers or War Dogs, but in general the (apparently) unlimited army building is a little concerning. There’s a reason the old format was limiting in terms of the capacity to take a Land Raider or a set of Leman Russes, though at least in modern 40k you won’t end up in a situation where you can’t hurt such a vehicle. We’ll have to see how things shake out as we learn more about the new rules. Overall though the signs are positive and encouraging – for years 40k has had a significant problem with “onboarding”, in that the game was just kind of non-functional below the standard points level – with few accommodations for small game sizes, things kind of broke down. When 500-1000pts is an unsatisfying game, veteran players are less likely to play it, requiring new players to build up complete 2,000pts armies just to get started. Hopefully the new version is a good indication of what we can expect to see from a more developed “small 40k,” making those kinds of games more viable – and allowing players an easier entry point to actually playing the game than “rush to build 2,000pts as fast as possible,” which can only be a good thing in terms of building our community.