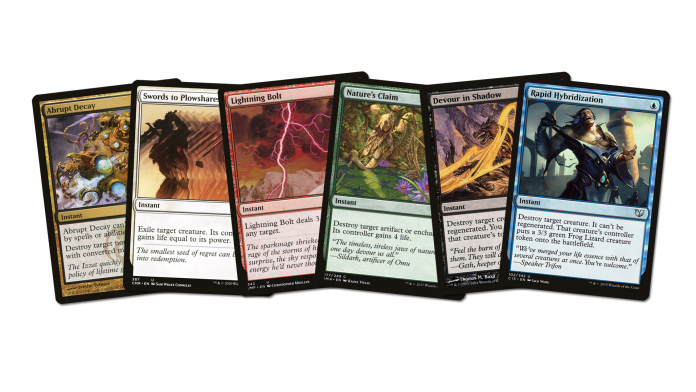 When it comes to Commander, despite the massive number of available cards in the format once you get into more serious play there are a number of cards that show up over and over in decklists. I think it’s worth essentially making a list of these cards and discussing why they are worth playing, and why they have become the “default” cards for decks. We’ll be calling this series Commander Best in Show and looking at these card groups.

In this inaugural edition of Best in Show we’re focusing on interaction, but upcoming editions will also feature mana rocks, ramp, rituals, counterspells, protection, free interaction, and lands. These cards are the building blocks of decks and, budget willing, they should by default go into any deck of the given colors.

Decks ought to be running 5-15 pieces of strong interaction, and of that most should be instant speed. One way to make keeping these on hand and putting them into decks easy is to use Moxfield’s packages feature. This particular package, curated by me, is available here:

You can just add this to any deck when building on Moxfield. You can also copy it and edit to your heart’s content. The package functionality is color identity sensitive (although it struggles a bit with fetch lands). Then you can trim down the cards you don’t want – for example if your deck is working off of death triggers you may want to use destroy effects instead of exile, to get those valuable death triggers.

Counterspells are absolutely a form of instant speed interaction, but we’re putting them into a different package will be coming up soon. If you prefer to counter spells before they resolve blue can heavily substitute in that direction.  However, there are a number of ways to make spells uncounterable, or to put permanents directly into play, so it’s dangerous to rely solely on counterspells.

So, going in WUBRG order:

Probably the most efficient creature destruction in the game. 1 mana, destroys anything regardless of color, exiles so it can’t be regenerated or indestructible and doesn’t go to your graveyard.

Basically same as Swords but your opponent gets a land.

Destroys a creature or planeswalker, but your opponent get’s a clue.

You’re virtually guaranteed to run into multi-colored creatures in commander, though occasionally your opponent may be running a mono-color deck, so this is a conditional include.

Permanent Destruction is very nice since you never know what sort of combo cards your opponent may use in commander, and can even be used to destroy things like Gaea’s Cradle.  Obviously, you’re giving away an elephant, but typically in commander a 3/3 isn’t too much of a threat.

This is a top tier interaction card in my opinion, and underplayed.  It ignores toughness, indestructible and regeneration, and it manifests the top of the players library.  This means it can also be used to block your opponent from using a combo-piece they’ve tutor with vampiric tutor or enlightened tutor.  It can also be used to protect one of your own combo pieces by manifesting a creature onto the board.  This could also be used to abuse things like Worm-Fang Manta or to sneak a creature out and not have it gain summoning sickness (like the banned Flash)

Go for the Throat

Simple creature destruction, as artifact commanders are quite rare this should almost always have a legal target and rarely will you not be able to destroy an important combo piece.

This is totally unconditional, and the life loss from toughness is usually not critical in a 40 life game.

This ought to be essentially unconditional, though definitely occasionally players will be playing counters.  Probably the weakest of the black creature destruction.

Losing 2 life is basically meaningless when you start with 40.

Many commanders cleverly have 3 toughness, to get around shock and 2 damage effects.  Lightning bolt can also target Planeswalkers.

This is a questionable one.  I think Shock is sometimes “good enough” but it’s definitely on the edge, as many good commanders have 3 toughness.

3 damage to a creature or artifact is flexible enough to be an auto-include.

There’s a variety of spells that destroy target artifact or enchantment, but Return to Nature is more or less a straight upgrade because it can also strip cards out of graveyards.  Frequently, exiling a combo piece, like gravedigger or gray merchant of asphodel or getting rid of a land in response to a deathrite shaman trigger can be a big deal.

Destroying any permanent is just flat good, and like Generous Gift, the 3/3 usually isn’t that important.

Split-second on top of enchantment or artifact removal can be critical for when a player has counter spells to protect their combo pieces.

Again, strong permanent control, and can’t be countered.  Really strong spell, and will typically let you blow up what you need, though occasionally there will be an expensive combo piece and you’ll be stuck (something like Bolas Citadel)

Another strong permanent control spell, no mana value limitation but it does give a basic land, which is part of why virtually all cEDH decks always run at least one basic (this and Path to Exile).

This doesn’t see quite as much play due to the sheer power of Swords and Path, but is a totally playable instant speed exile spell.

Drown in the Loch

This is one of those spells that actually gets worse against bad decks.  More competitive decks will run fetchlands to fill their graveyard, and small utility creatures and cheap spells.  Battlecruiser decks can actually make this card hard to play.  Nonethless, the flexibility of countering or destroying creatures is incredibly powerful.

This is another strong Orzhov control spell, which allows for Artifacts, Enchantments, and Planeswalker control.  Occasionally you can get into a locked-out situation due to a planeswalker like Ashiok, Mind Render and your opponent has a big blocker, say Atraxa, Praetors Voice you can’t get around.  I think the added flexibility to take out Planeswalkers is often worth it.

I think the flexibility of control on a card like this really makes the difference, especially if you have some 1 cost combo enabler you know you may need to recur.  Bouncing something critical that might be exiled can also be quite useful.

Most combo pieces are actually mono-colored, though some are artifacts and that can be problematic.  The ability to exile it can be quite useful too vs decks that can’t recover something like Food Chain or a Shrieking Drake.

Have any questions or feedback? Have a request for a future package you’d like to see us cover? Drop us a note in the comments below or email us at contact@goonhammer.com.