Welcome back to Best in Show, our ongoing series on core cards that fit into any deck, regardless of strategy. Slow interaction here is a bit of an oxymoron since your opponents have to more or less let you blow up their stuff. Most decent Commander decks revolve around getting a final piece of a combo onto the board to win the game, and most games can’t be won through wars of attrition. I’ve gone over before why this is, but the normal 1:1 trades don’t work; you’d have to consistently trade better than 1:3, and even then many decks can win once they assemble a couple of pieces, regardless of being “down” most of the game. In addition the 40 life point starting total means attrition decks will take many turns to chip away at someone’s life, and this cushion leaves them with plenty of opportunities to resolve their big spells.

Nonetheless, there is still a place for some slow-speed interaction, especially to bring in a political dimension to the game or to be used to blow up multiple value pieces, e.g. get rid of Rhystic Study.

As you look through these spells and enchantments you’ll see there’s a fairly common theme: They either go 2:1, or have a stax effect. There’s some advantage to just playing enchantment spells, especially in enchantress decks.

This package is available for use at moxfield here, curated by yours truly. 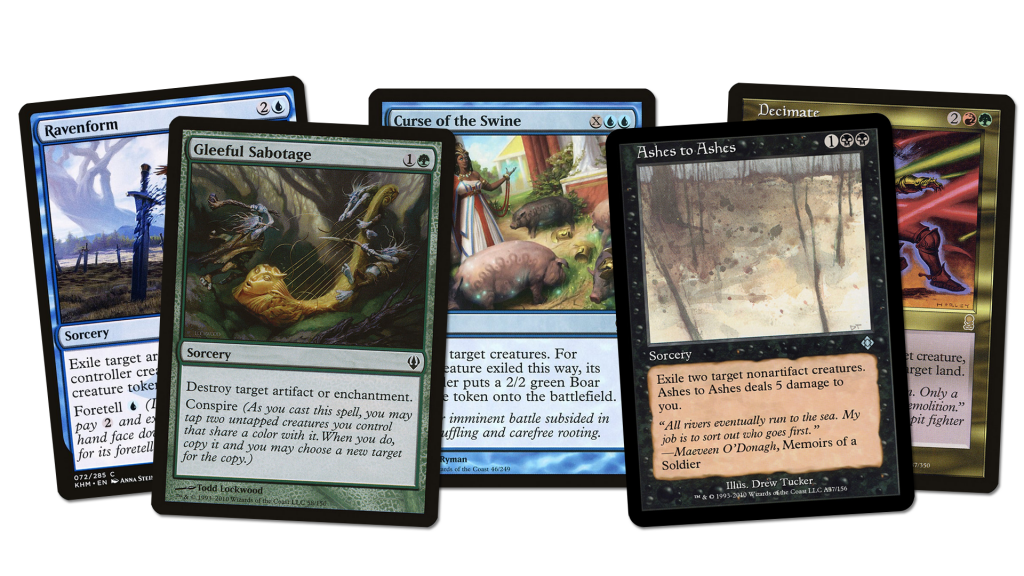 Curse of the Swine

XUU and exile x target creatures is a pretty powerful set.  It ignores toughness and indestructibility, keeps them from going to the graveyard, and scales pretty powerfully with mana.  Spending 5 mana can virtually be seen of as a time walk.  If 8 mana to overload Cyclonic Rift is worth it then Curse of the Swine ought to be.  Obviously, the key difference is that Cyclonic Rift is an instant, so it can respond to a developing situation and can be used to throw up the board during your predator’s turn.

Gleeful sabotage is a questionable card, but there are definitely times when blowing up two artifacts or enchantments by tapping 2 more creatures should be worthwhile.  If you’re in an enchantment heavy meta in particular this could be a decent card, though it’s competing with a lot of similarly costed “destroy all” enchantment spells.

This spell is so flexible that I think it’s definitely worth considering.  Yes, it’s a sorcery, but creature or Planeswalker or artifact or enchantment is so flexible it’s almost certain to let you blow up a key-value piece early.

Another 2 for 1 at the cost of 5 life, but it ignores toughness, and the only conditionality of it is not-artifact, which should include virtually all relevant creatures now that Golos, Tireless Pilgrim has been laid to rest.

I like this card because it foretells for 2 and then hangs out, so you can get it out of your hand and then use it later for a single mana.  Blue has several “draw 7” type of cards so in decks like Opus Thief and other wheeling variants I think it can add a lot of value.  There’s also an increasing value in casting from exile, which this fulfills, and it’s flexible, exiling something important, and in return, they only get a 1/1 bird.

This is slow speed permanent control, but I think it’s flexibility, along with the built-in lesson ability, mean it’s occasionally worthwhile.

4:1 is pretty solid, and for fun, I made a Riku of Two Reflections copying deck.  Resolving 3 copies of this in a turn is pretty devastating to your opponent’s board states. 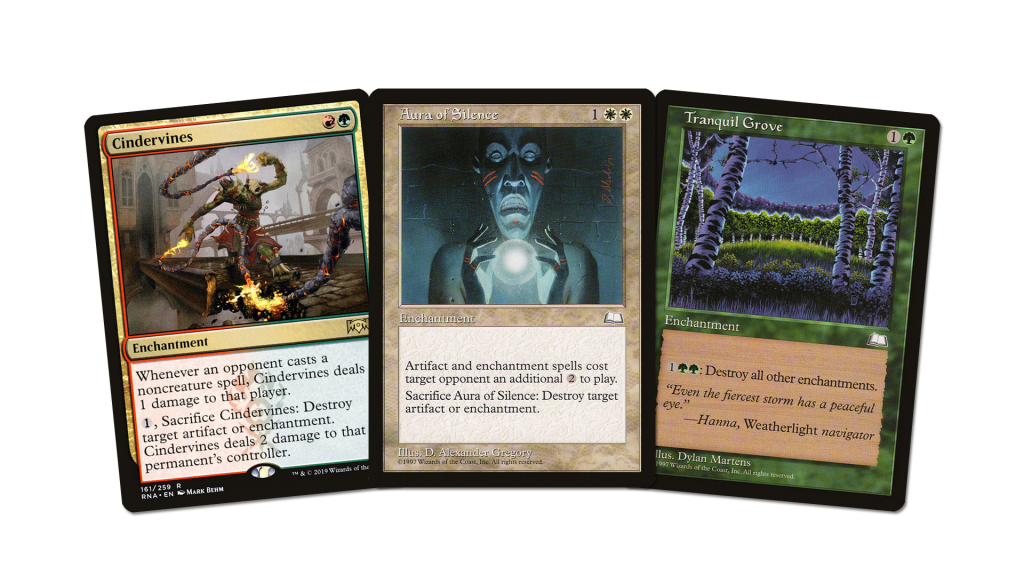 This is just an all around amazing Grrul card.  Amazing group slug power, and on top of it you can sac it as though it’s a seal.  Just amazing imo.

More or less disenchant, but sits on the board, which sometimes has value, is a permanent for things like Ascend, enchantress, and replenish all have applications

This is kind of hilarious enchantment hate, if you truly roll a deck with no enchantments, just repeatable enchantment clear.  Would be pretty funny to drop this, then later get an enchanted evening out and then make your permanents indestructible somehow.

Just absolutely top-notch spell.  1 more mana on top of Seal of Cleansing to make all your opponents artifacts and enchantments cost 2 more, and they won’t want to remove it, because you’ll react by blowing something up.  Shuts down some decks almost entirely.

That wraps up our look at slow interaction this week, but there will be more to come as we look at mana ramp, utility artifacts, lands, and other packages in the future. In the meantime if you have any questions or feedback, drop us a note in the comments below or email us at contact@goonhammer.com.