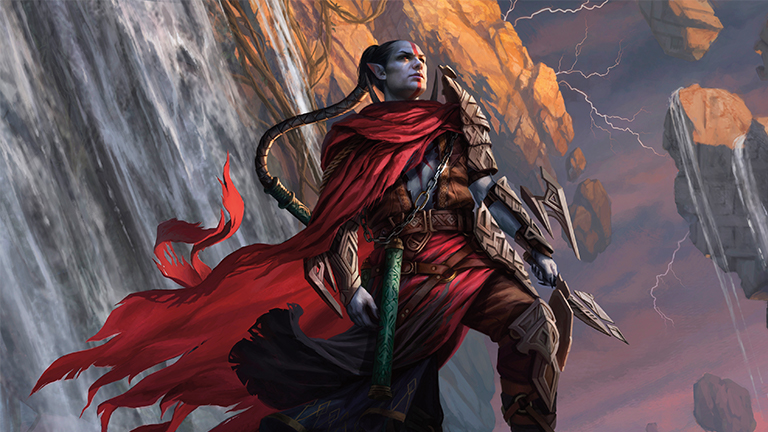 Yes, thank you I know how to spell. But that’s the point of a rogue deck. I tricked you into correcting my spelling. You fell into my cunning plan of, well proving something or other.

Rogues are a nifty subtype with a focus on combat tricks, evasion, and various kinds of card selection and draw, tending to be small creatures, mostly blue and black, though with some nifty red ones as well.  There’s even a rogue-centric keyword – prowl.

Technically speaking, prowl isn’t actually rogue only; it can be whatever matching creature type, but so far it’s appeared on rogues 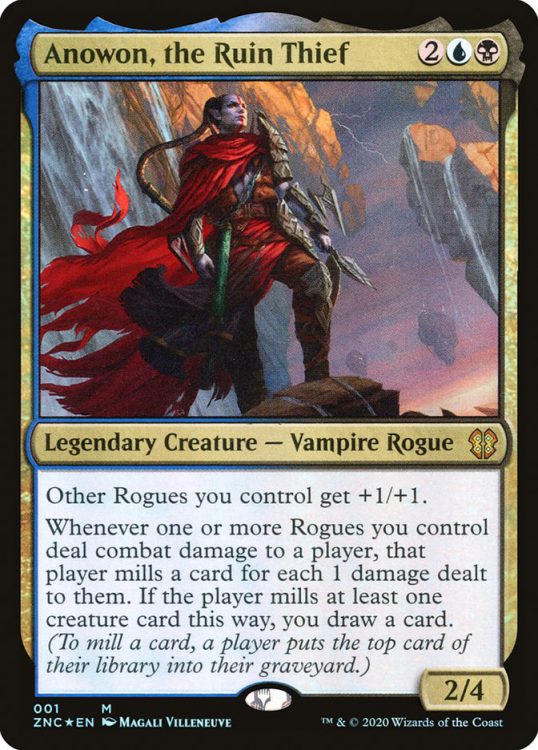 Mill is another funny archetype and keyword.  Mill has been around forever, named for the eponymous millstone, which was a feature of the deck that won the first world championship.  It wasn’t really a mill deck per se, but just a strongly meta deck that beat the decks that other players were playing (a lot of sligh) and “put cards in your graveyard”; “target player(s) puts cards in their graveyard” has existed on and off for a very long-time but only recently got a keyword.  Giving it a keyword instantly kind of increases the power level, because WotC can buff mill with cards like Bruvac, the Grandiloquent who essentially doubles your opponent’s milling, and they can also build in triggers like “whenever a play mills a card, do something“.  As a pure win condition though Mill is quite dangerous.  Milling your opponent’s deck can actually enable his deck really powerfully.  Decks that reanimate for example, or can leverage their graveyard in various ways are often trying to self-mill, to get cards into the graveyard.  At one time it wasn’t that uncommon for plays to essentially skip their first turn, so they’d draw and be forced to discard, discarding a huge fattie and reanimating it.  Giving your opponent a huge selection of cards to play from their graveyard is therefore dangerous.  Finally it’s often hard to race the clock properly, decking someone before they can kill you (this is in standard play) in commander it’s probably even more dangerous on it’s face, for a number of reasons:

Given the dangers of running pure mill as a win condition, it’s probably best to use it rather as an enabler.  Rogues slot nicely into this, because many of them have graveyard based bonuses, reanimation effects, mill themselves, and the dimir colors offer some ways to penalize your opponents for cards going into their graveyard.

Perhaps most notable of these is a simple, cheap, two-card combo that is unfortunately rather slow:

The problem is this combo is so game-ending but slow, so obviously telegraphed it will most likely get blown up.  But even just getting a bloodchief ascension out is really dangerous for your opponents.  There’s no paucity of wheels, looting (faithless looting) style cards, paired with fetchlands.  Bloodchief can easily get opponents dangerously low.

Syr Konrad, the Grim has a similar damaging trigger when creatures enter graveyards.  Syr Konrad can go off just as well with Mindrank, though it’s not as consistent since it’s only creatures, but it pings every enemy player.  If you’re serious about tribal, he’s no rogue.

There’s a number of interactive triggers in this deck, so you’ll need to pay close attention to your board state.  Anowon, the Ruin Thief makes players mill a card for each damage dealt to them, which can trigger mindcrank of Syr Konrad, the Grim, or trigger Psychic Corrosion, ditto.  As you get more and more of these triggers into play you can cause a cascade of effects triggering off each other ending the game, and that’s primarily the goal.

Getting there requires a bit of threading the needle.  You’ll want to try to get some ramp down fast, as blue and black don’t accelerate other than through artifacts, generally, and thus this deck runs virtually every available 2 cost mana rock, to increase the chances of a turn 2 rock so that on turn 3 you’ll have 4 mana available.  You’ll want to balance this ramp need vs card draw need.  The deck contains many creatures that either cause card draw or card selection, so if you can drop an evasion creature with a card draw trigger, or you know an opponents deck won’t offer a blocker, get that out asap, so that you can keep drawing.

Keep dropping more rocks whenever you can, all your big finishers are more expensive, and you’ll want to maneuver into a spot where you can cast a big spell and protect it on the same turn.

Cards like Fractured Sanity and Maddening Cacophony can finish the game out for you.

Your opponent’s graveyards can be a huge resource for you.

Players often seem to forget, but Animate dead, Dance of the Dead, Reanimate, Necromancy, can all reanimate creatures out of your opponent’s graveyards.  If an opponent has a huge fattie, or a stax effect, or something that can enable a lot of card draw for you, grab it.  Reanimate it.  Your primary reanimation target is Syr Konrad, but reanimating spells do double duty once he’s in play – they get milled causing damage then the reanimation itself causes even more damage as they leave your grave.