Commander Focus: Conquest, the Format of the Future Past

Conquest is a new-ish (it’s actually close to a year old at this point) format that attempts to capture the interesting aspects of cEDH while avoiding some of the problematic luck components and excessive shuffling aspects. It’s no accident that a huge portion of cEDH deckbuilding guides is given over to the mulligan strategy, and most cEDH decks revolve around either exploiting a phenomenal amount of tutors or have card draw engines built into them to cycle through the filler of a deck; combos such as the Lion’s Eye Diamond + Wheel of Fortune + Underworld Breach function as a way to simply ram through the deck and find a specific 2-card combo which will win you the game. Many cEDH games don’t revolve around permanents on the field, but rather finding specific pieces in your library and playing them. In that sense the game is often closer to another Richard Garfield Game – Jyhad, also known as Vampire: the Eternal Struggle after it was renamed and was a game with built-in multiplayer mechanics.

As a broad strokes overview: Conquest lowers life totals, lowers the commander damage threshold, and rethinks the format ban list, banning most of the powerful one-mana tutors as well as the fetch lands and some of the most abusive mana rocks.

From the rules document:

(Similar to Commander, a deck can contain no repeat cards except basic lands.)

This means games revolve a lot less around players’ starting hands and rapidly executing a mana burst into an Ad Nauseum or trying to drop a Timetwister + Hullbreacher combo or something of that ilk.

The increased ban list also includes several competitive staples from the cEDH format, which opens up deck design considerably. Cards like Rhystic Study are such auto-includes in cEDH that decks with blue in the color identity might as well have 98 cards in them. The lower life totals and lower commander damage threshold mean that combat damage and one-punch strategies are much more threatening. A 2-power commander can get a single Invigorate and double strike and just take someone out. That’s much more realistic and repeatable than needing to ramp up to 21 damage. While needing to do 90 damage to kill every other player is still a significant barrier, it’s functionally much more threatening to just start swinging away at people, you can pretty quickly focus down a problematic player. This means that life is no longer a nearly meaningless number, and it means that cards like Ad Nauseum give you less chances to draw into what you need, and also again lowers the threshold of simply being killed off or threatened by a swinging commander deck.

Was there really anything wrong with Commander?

If you try to push Commander to its limit competitively you start to notice certain inherent problems in the format. A 100-card singleton format that has an idiosyncratic ban list means that the range of possible cards goes all the way from “cards in the power nine” – Timetwister is a staple of the format – down to cards that might make the list of the worst cards in Magic – completely dire cards like Great Wall or Clear a Path. Obviously you don’t have to run those terrible cards, but the point here is that card quality is pretty spread out, even at the upper echelons.

The realities of color identity and the singleton format mean that in most cases you will only be able to play cards from certain colors, and since you can’t run multiples of a card the number of uniquely different cards in a deck is much higher than a standard deck in other constructed formats. In a 60-card deck in Standard, running say 22 lands (a bit light) leaves you with 38 nonland cards; if you run 4 of each card you’ll have 10 different cards in the deck – 9 cards with 4 copies each and one card with 2 copies, plus your 22 lands. Deck construction has recently shied away from the 4-of-each card formula, but even running 2 of each card will only leave you with 19 distinct nonland cards in your deck.  Vampiric Tutor sees play, but so does Personal Tutor, even though there’s a pretty big difference in power level between them.

In a commander deck, running 34 lands you’d need to run 66 different unique cards. So that’s just a lot more different cards.  While there are definitely cards that there are effectively multiple versions of, the most common being Llannowar elves, Fyndhorn elves, Evish mystic this isn’t true of all cards. If you’re building an Abzan identity deck and want the “destroy target permanent effect” I’d argue the best cards available to you are Assassin’s Trophy, and Abrupt Decay, but those cards are different from each other, and if you want more “destroy target permanent” you’d probably add in Generous Gift and Beast Within.  But that’s only 4 cards, and you might need or want more control then that, and you rapidly find the card quality deteriorating, and you’d have to ramp up the CMC and probably lose instant speed to get more “destroy target permanent.”  Desert Twister springs to mind, but that might be because I’m a true OG.  Or original nerd, anyway.

This leads to decks having a lot of filler cards, or focusing on ways to actively cycle through cards. Gitaxian Probe effectively just trades 2 life for reducing the size of your deck by 1 card; generally speaking the fact this card recurs commonly is indicative of the fact that the life total is too high, and the card quality is too spread out.

So the result is that decks are generally built around some kind of engine for drawing or searching out cards to execute a game-winning combo. Games turn on casting Silence or Autumn’s Veil and putting a combo piece into play and executing around it. While that’s still possible in Conquest, games tend to function more around putting something on the board and protecting it. Additionally a lot of the better card draw in the Commander zone (Thrasios, Triton Hero and Tymna, the Weaver) have been banned as commanders. This, combined with the fact that you don’t have access to Timetwister, Wheel of Fortune, Rhystic Study, and Mystic Remora means that a lot of the ways to plan to draw into combo pieces or tutors are gone and your cards have to actually do things; your strategy can’t just be to 0-cost counter spells in your hand until you’re able to execute. Again this is a feature of cEDH that makes the game closer to Vampire: the Eternal Struggle, rather than what many players may feel that Magic is traditionally about, and that’s worth addressing.

“Just negotiate with your playgroup”

This is a common rejoinder to attempts to alter the format or address some of the issues (Editor’s Note: This is neither unique to Commander nor Magic: the Gathering). Also in the same neighborhood of arguments are “you don’t have to play competitively” and “if you don’t like playing that way then don’t play that way,” and “just play to have fun.” There’s nothing wrong with these responses, but I think it would be nice to have a similar format to Commander that is more about playing the game well and less about mulliganing and getting lucky. There’s also the desire to be able to sit down with strangers and play Commander. Assuming we ever dethrone this virus (get it?), local game stores will return to having games, and I’d like to go back to showing up every week or two and playing some Commander (my lgs also sold beer and I miss it so, so much). Playing pick-up games against strangers requires a format that is more resilient to differences in play style and disparities in deck quality, since those conversations are unlikely to happen between two strangers prior to their first game.

And frankly, I’m tired of shuffling so much – running 7-11 fetch lands and 6 or 7 tutors in a cEDH deck combined with the need to mulligan sometimes multiple times at the start means you end up shuffling your deck on average more than once per turn. That seems like a lot for a 100-card deck with sleeves. You end up spending a lot of time shuffling and watching people shuffling, not playing.

This isn’t the first attempt to create a similar format to Commander – Wizards certainly tried with Brawl a few years ago but unlike that format, Conquest isn’t tied to Standard. It’s worth noting that Conquest has actually been around for a little while, and in fact just concluded its first major tournament in order to celebrate the 1-year anniversary: 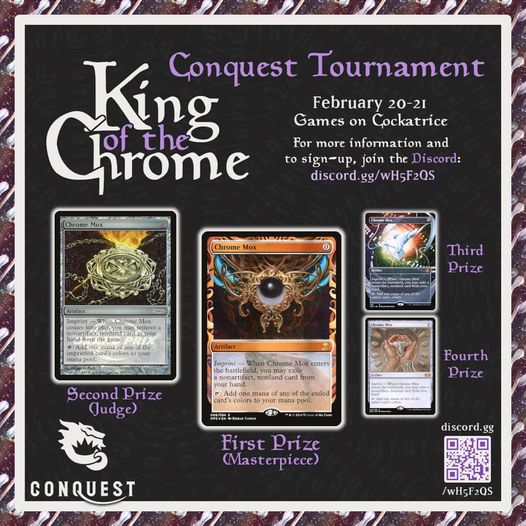 I think Conquest has staying power and will continue to grow in popularity. I think many players sense the inherent issues with Commander and the rules committee seems committed to not addressing them. Conquest offers an exciting alternative and is worth checking out. If any of this seems interesting, here are some useful links for more information:

In the weeks to come I’ll sometimes be posting conquest versions of Commander Focus decks – let us know how you feel about those and if you’re interested in seeing more of them! And as always, if you have any questions or feedback, drop us a note in the comments below or email us at contact@goonhammer.com.