As soon as I saw The World Tree I thought there had to be a deck around it. Of course, it could be just as simple as running god Tribal deck. There are quite a few gods with nifty or powerful effects. Sadly only some of the putative gods are indestructible, or it would be really easy to run a god tribal deck with a bunch of Wrath of God effects in it (insert rimshot sound effect here). The Amonkhet gods though are not all indestructible some are but the rest go back into your library and the Kaldheim gods have neither protection, but rather are modal double-faced cards, generally with an equipment version, but some with an enchantment.

Sadly, while there’s not really that much in the way of the tribal synergy to the gods there are a few cards like Altar of the Pantheon that help your devotion, but nothing really helps gods in general. Though you could certainly run something like Morophon the Boundless and use him to reduce costs. There’s probably something that could revolve around using Changelings to count as gods, and this deck does a bit of that. But perhaps in reverence to the ideas of non-monotheistic gods fighting amongst themselves (which is not really how the old polytheistic deities were recorded historically), the god cards of Magic seem to share themes of low colored mana costs and abilities that often don’t really play off of each other all that well.

Getting a bunch of creatures, and putting them all into play at once though – that’s a powerful effect. Combined with some enters-the-battlefield battlefield effects it has the possibility of either ending the game or setting up a board state your opponents can’t recover from. Today’s key to doing that is the world tree, which is an obvious reference in Magic-ese to Yggdrasil.

The World Tree, when sacrificed, lets you go get any number of god cards and put them into play. So in theory that has to be our win condition – whenever we do that, we should win the game.

What gods have powerful abilities that trigger on entering play?

The main contenders are almost definitely Purphoros, God of the Forge and God-Eternal Bontu, combined with The Locust God.  If we sac the world tree to fetch those three, whenever a creature enters play, we’ll deal 2 damage to each opponent, and then, we’ll get to sacrifice a number of permanents, drawing cards, and triggering The Locust God to create more creatures off our card draw, which will generate more creatures entering the battlefield.

So The World Tree costs 10 to activate, and its in the form of WWUURRBBGG and you have to sacrifice a land (it) to do it’s thing. That’s a lot to ask. Thankfully once you have 6 lands out, your lands gain the ability to tap for many of any color.  Still rather a lot of mana. Thankfully Esika, God of the Tree, has the ability to tap for one of any color, as well as granting that ability to legendary creatures you control. Conveniently all the gods are legendary creatures (or at least one face is) so if you are dropping  gods down they can help tap to set the tree off.  But in ideal circumstances, almost all your gods will be entering playoff The World Tree’s activation, so it’s necessary to have a fair amount of ramp.

Thankfully Simic offers a lot of good options that include drawing and putting lands into play, and Esika is green herself, so that makes it really safe to run the full elves package into Gretchen Titchwillow, Thrasios, Tirton Hero; Kefnet the Mindful; Tireless Provisioner; Tireless Tracker; Tatyova, Benthic Druid and Aeisi, Tyrant of Gyre Strait. Almost all of these are legendary creatures also, so they will start tapping for mana themselves, in addition to allowing the deck to nearly abusively ramp up lands and draw for the privilege.

Since it’s intended as a battlecruiser- to mid-deck in terms of power and play style, there aren’t a lot of control cards here – just the basic “best in show” quite of removal, which includes powerful destroy permanent effects and exile creature effects.  The point is mostly to blow up a combo midstream or else destroy a Stax piece when we attempt to go off.

With Exploration, Burgeoning, Azusa, Lost but Seeking, and  Mina and Denn, Wildborn, you can play a lot of lands really quickly. Don’t hesitate to use Ramunap Excavator and Crucible of worlds to recur a fetch-land over and over, generating double the land etb effects – and thus double the card, treasure and clue draw – in order to get through your deck.  Once you have a fair amount of mana you’ll want to get The World Tree and summon your god-pile.

Getting there, though – that’s the rub. There’s not a lot of tutors that will let you fetch any land. There’s a lot that will let you fetch a basic land, or a card that isn’t basic but nominally has one of the basic land types, but The World Tree, though it taps for G, isn’t a forest. So we’re running quite a few land tutors, to fetch our combo piece. Basically, almost all the ones that can specifically grab the world tree: Sylvan Scrying, Expedition Map, Pir’s Whim, Tempt with Discovery, Golos, Tireless Pilgrim; and Crop Rotation.

Oh and while we’re here – one thing that I find incredibly frustrating from a fluff/naming standpoint is the existence of The Path to the World Tree, a card which DOES NOT LET YOU FETCH THE DAMN WORLD TREE. It’s like a quest for the sword that doesn’t give you a sword.  What – is the treasure, the friends we made along the way? 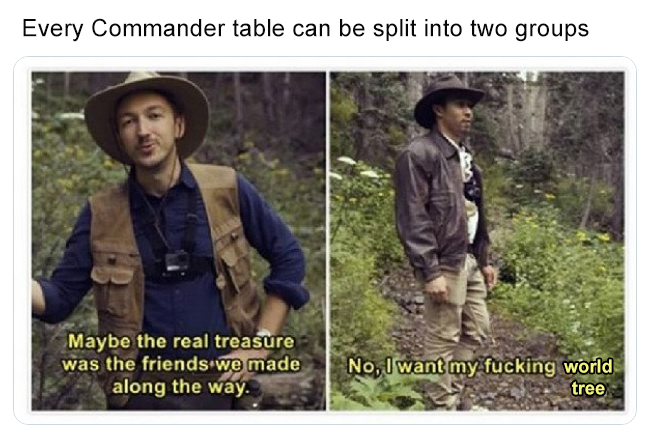 Fuck that.  I want The World Tree not a bear and a basic land and 2 life lost and 2 life gained and 2 cards.  What does a bear have to do with it?  I’m sure there’s some edda or something that explains, but I don’t care. If a card’s name says it is how you get another card, it should get that card. If there was a creature called “Dragon Summoner” I’d expect it to summon a damn dragon, not give me 2 treasures and deal 2 damage among up to 2 targets and put a card from my graveyard on top of my library.

Once you manage to activate the world tree, you have a bit of a timing issue on your hands, because you’ll put a bunch of players in play, both simultaneously, but in order.  This matters because creature ETBs are important, and some of your Gods are only creatures once your devotion reaches the appropriate level, meaning some may enter as enchantments, and then turn into creatures, but they won’t have entered the battlefield as creatures, and thus won’t trigger Purphoros, God of the Forge or Impact Tremors.

At the same time (and yes, simultaneously) we’re using a unique copy creature – Moritte of the Frost.  Moritte is a changeling, which means in every zone he’s every kind of creature.  So when you trigger the World Tree, you can fetch him.  He copies any permanent you control but is a legend.  This is where things start to get sort of complicated.  If you chose to copy a legendary permanent, Moritte will be a copy of that permanent, and also a legend, and thus, he’ll die.  But he won’t do so until state-based effects are checked, which can’t happen until a player would gain priority.  What this means is that you can copy Purphoros, God of the Forge with Moritte, and you’ll get all the enters play triggers, but then the legend rule will be checked.  It’s also worth noting at this juncture that mana cost is a copiable value, so Moritte of the Frost won’t add GGU to your devotion, but the mana pips of whatever you make a copy of.

So the first part of your god-pile is to get Purphoros and a copy of Purphoros onto the field.  Since we want them to get creature etbs start with Purphoros, then Moritte, then Illharg the Raze-Boar, then the Locust God, then the Locust God, then Asmodeus the Archfiend, then Mogis, God of Slaughter, then Phenax, God of Deception, then either Erebos, as your devotion will be five now, letting them enter as creatures.  Nylea Keen-Eyed and Karametra, God of Harvests should enter as creatures due to your elves giving you devotion to green.

Now that really makes things kick-off is God Eternal Bontu, who will let you sacrifice any number of permanents and draw a card for each permanent you sacrifice, combined with Erebos, Bleak-Hearted, every time a creature you control dies, you can pay 2 life to draw a card.  All this card draw means that The Locust God will create insect creatures, each of them also generating an enters battlefield effect for your original Purphoros.  As if that’s not enough, Purphoros Bronze Blooded gives all your creatures haste, and Esika lets them tap for mana, or Phenax, God of Deception lets them mill someone.  Depending on the game state you can use this to mill yourself to get your Kozilek into your graveyard, thus reshuffling and possibly world tree-ing again, or else to mill someone else out of the game.

You will probably want to sacrifice Asmodeus to make sure you actually get your card draws, and the best way to do so is using Erebos, Bleak-Hearted, but you can do so after you put a draw 7 on the stack, netting you even more draw.  This sort of redundancy also means that if some of your triggers get screwed up then you can recover your draw by just adding a bunch of black mana, putting some draw 7s on the stack, then sacrificing Asmodeus.

There are some dangerous interactions with this deck though, drawing and losing life and due to creatures dying, as well as the dangers of Asmodeus stopping your card draw,

As always we’d love to hear from you, if there is a particular commander, color combination, mechanic, tribe, theme or any other way you can think of making a deck we’d be happy to accommodate you.