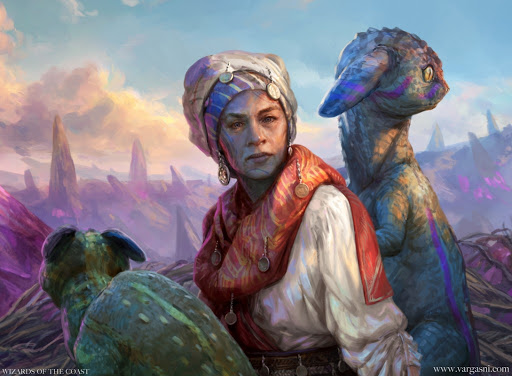 In Commander Focus, Pseudanonymous looks at key Commanders, how to build around them, and what makes their decks work. In this first installment, he’s looking at Gavi, Nest Warden.

Gavi, Nest Warden is a tri-color commander that came out of the Ikoria cycle. As a preconstructed deck, it fell decidedly into that “immediately swap out the titular commander for its alternate for an upgrade” category but cycling repeatedly as an ability certainly has some potential powerful upsides. Jeskai, as a commander wedge, is in a strong place. It has a bevy of potentially good commanders, but none are truly top tier.

But I wanted to build a deck around a more unique mechanic, cycling. Cycling has been around for a long time, and it’s a fairly neat, balanced mechanic. Essentially it allows you to pay some cost and discard a card with cycling to draw a card. Simple enough, and cycling abilities can be leveraged, with some cards having an effect whenever you cycle and some cards triggering off cycling. Recently Wizards has gone intensely into the idea of “the second card you draw” or “for the first time each turn” type effects. This is in part to stop the parade of endless infinite combos which can often rule eternal formats. Particularly in commander, you can see a lot of cards with “Whenever:” leveraged with a cost reducer to break parity and be leveraged into a win condition.

Cycling is rather old, as mechanics go, is rather old, first appearing in Urza block, and is one of the most popular non-evergreen mechanics. Part of what is powerful about cycling is it is not casting a spell. Many times, in order to end the game players in commander, will resolve a Silence or a Veil of Summer. Once that hits the board it is difficult to stop them, since players can no longer cast spells or counter the active players’ spells. There are a few cards that remove spells from the stack or exile them, so with the veils (there’s also Autumn’s Veil for a virtually identical effect), it’s possible to stop them via spellcasting. But cycling a spell which counters a spell when it cycles is not casting a spell, and the effect countering the spell isn’t a spell, it’s an ability.

From the Comprehensive Rules:

So we’re going to find synergies between Gavi’s ability, which is to make cycling free, and cycling cards to give us control and generate cycling effects. The win condition is a tough grindy one: try to stax out the table with rule of law and ping our opponents to death.

None of these in and of themselves form an infinite combo, though we’ve included a Peregrine Drake and Eldrazi Displacer, and a secret forgotten tech, the original Desert or a Strip Mine. With these 3 in play, we can generate infinite mana and infinite ETB effects.

Our control spells will be those with cycling abilities, and our ramp likewise will focus on cycling, but we’ll use the talismans rather than signets, which, while painful, can power the Eldrazi Displacer when we need it. For a stax effect to make the game long and grindy, to let our 1-, 2-, and 3-damage effects add up to 40s, Rule of Law and Deafening Silence and Ethersworn Canonist and Arcane Laboratory. In theory, this should allow us to slow the game down enough to get our 5 cmc commander out and start cycling like mad.

Our Ramp and Land base are simply the best of the mana rocks and cycling lands.

There are plenty of other ways you can build Gavi, for example, you could run all basic, and Back to Basics, Magus of the Moon, and Blood Moon. These effects can be huge. You’d give up a lot of your land cycling, though you’d get it back with Tectonic Reformation.

One of the criticisms I have of this deck is that it feels like it will have very uneven games. Sometimes it’ll ramp appropriately lock down the game with a stax effect, and grind things out. Other times it will miss the Stax or get countered or removed, and simply be too slow to keep up. To some degree, this is a function of your meta. It also lacks arguably some of the most powerful value cards in the environment, despite them being in the commander’s color identity: Rhystic Study, Mystic Remora, and Smothering Tithe. This is a deliberate choice since we’re hoping to lock the game down. Players who can only play one spell per turn may well pay their taxes rather than simply give away the card draw and treasures, and we really can’t afford the room for them all.

Next Time: Rin and Seri, Separable from my money