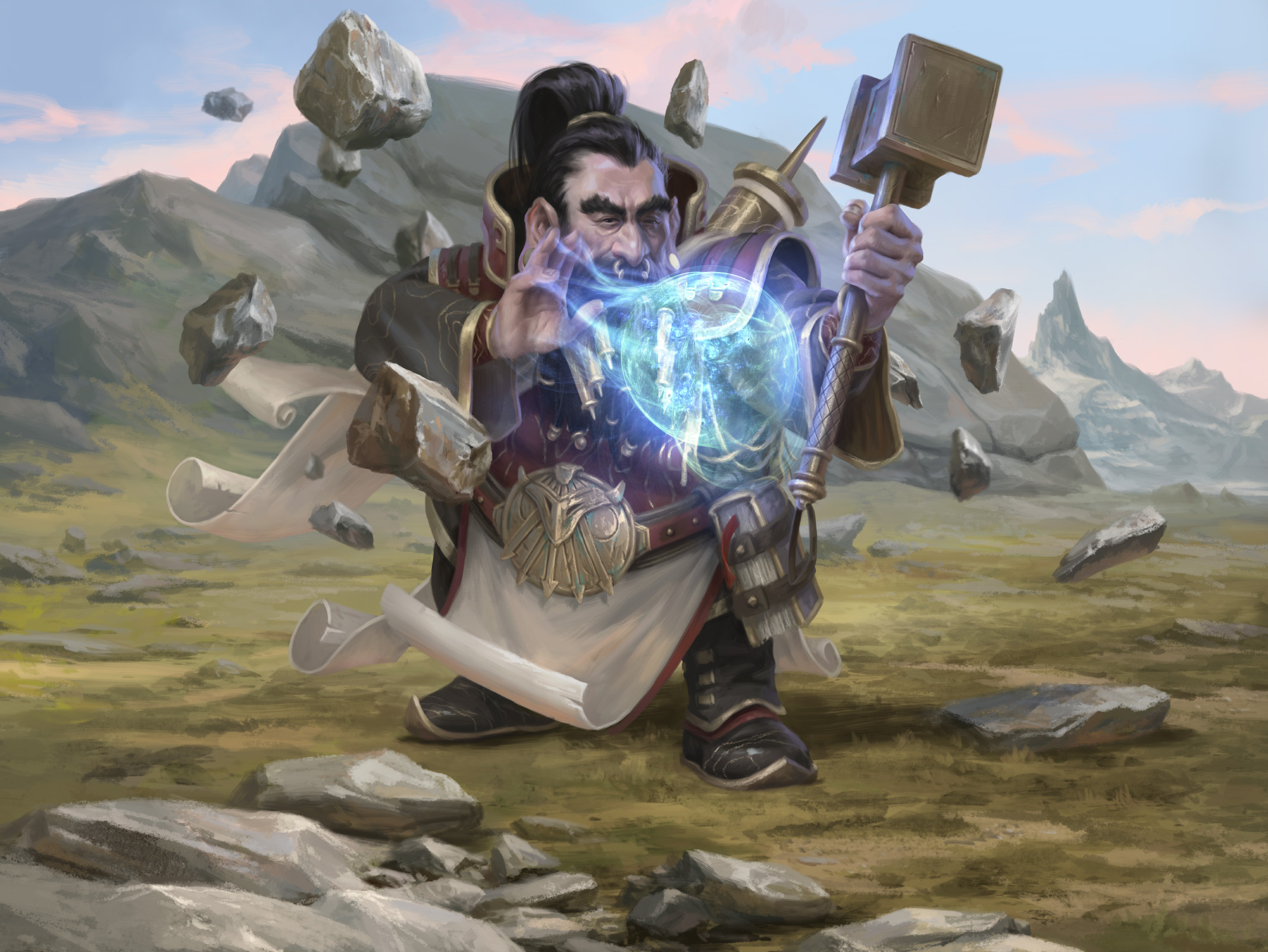 Credit: Daarken, Wizards of the Coast

With the release of Strixhaven, Boros (or Lorehold) received a unique, fun new look for the colors with Hofri Ghostforge, who gave us a cool way to recur powerful creatures like Sun Titan and Wurmcoil Engine for value. Naturally, I decided that sounded boring and actually good and decided to go with the prospect of creating a bunch of X/1’s for 5 instead. Tribal decks and odd restrictions are some of my favorite things in Commander, and I sure as hell have never seen someone running RW Spirits before (though red spirits aren’t new to Strixhaven), so I was anxious to see what I could cook up. 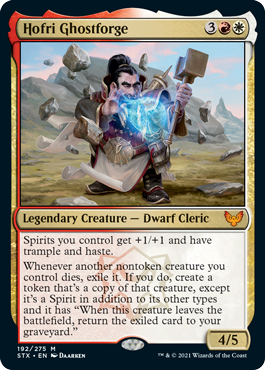 Hofri has two excellent abilities: The first gives us a lord effect and two invaluable keywords in haste and trample; the second gives us some value recursion and boardwipe protection. Ironically we’re going to be a more traditional Boros deck and lean heavily on the first while enjoying the occasional benefit of the second. Our creatures will generally be pretty small, so the +1/+1 is borderline mandatory. And because we want to connect with those creatures, surprising our opponents and then trampling over their blockers is exactly what we want.

Most of the time I want to have about 10 sources of ramp in a deck, and in these colors that usually means artifacts. We have the usual staples like Sol Ring and Smothering Tithe and a suite of 2 mana rocks like Arcane Signet, as well as the new staple Archaeomancer’s Map. Burnished Hart and Solemn Simulacrum have additional upside if we cast them with Hofri out to allow us to get their effect twice. On top of that we have a unique rock that sees virtually zero play in Thunder Totem because it can be animated into a Spirit if we want.

The other most powerful thing to do in Commander in conjunction with ramping, I want approximately 10 sources of draw as well, which in this case is a bit of a hodgepodge. Valakut Awakening lets us use a new MDFC, Lorehold Command does a bunch of things we want to do including the upside of triggering Hofri and also drawing two, while Relic Vial does something similar and also provides some incidental life drain and gain since Hofri is a Cleric. Icon of Ancestry and Vanquisher’s Banner are classic tribal cards. Bygone Bishop is a Spirit that provides us a way to draw, as does Ugin, the Ineffable with the Spirits he makes. We also have a few sources of pseudo-draw such as Laelia, the Blade Reforged and Stonebound Mentor.

Historically Commander has been a format that has preferred mass removal over targeted, but as the format has sped up over time and the threats have become more deadly, I have found myself including more pieces of single target removal. Here we have some thematic sources in Reduce to Memory, Afterlife, and Ugin, the Spirit Dragon, which also can serve as a boardwipe. For actual factual Spirit creatures that serve as removal, we have Hanged Executioner, Nikko-Onna, and Yuki-Onna. 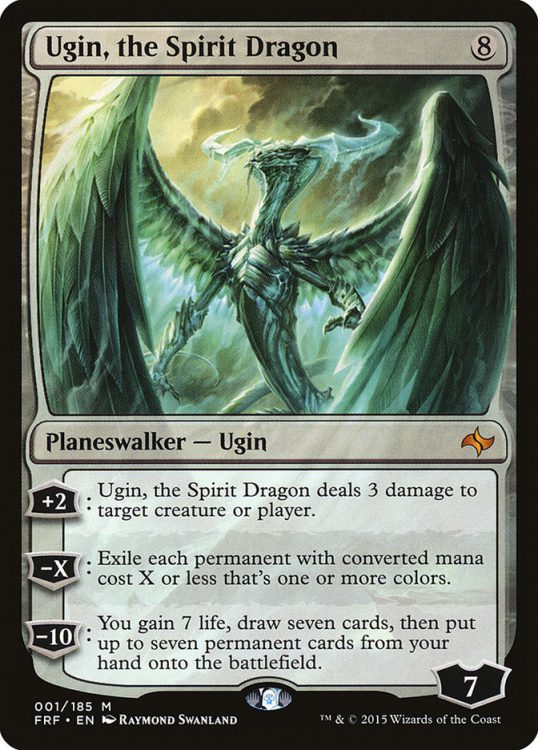 In addition to Ugin, we also have March of Souls, Single Combat, and Austere Command. March of Souls seems symmetrical but we are positioned to take much better advantage of the resulting creatures than our opponents. Similarly, while Single Combat lets our opponents keep their best creature, we can keep Hofri in order to get a token copy of all of our creatures back with haste and two turns of combat before they can cast any blockers. Austere Command can flex to deal with almost anything necessary.

There’s a ton of effects that we want to include as one or two ofs in order to cover our bases. Kami of False Hope lets us fog on a crucial turn, Remorseful Cleric hits problematic graveyards, Selfless Spirit protects our board, Ore Gorger deals with problematic lands, Windborn Muse and Strict Proctor tax our opponents or outright keep them from doing what they want. We have a couple of other hatebear effects like Spirit of the Labyrinth which forces our opponents to be as bad at drawing cards as us and we can also cheat around with things like Bell Borca, Spectral Sergeant, and Eidolon of Rhetoric to slow them down. Malignus offers us a devastating heavy hitter in conjunction with Hofri. 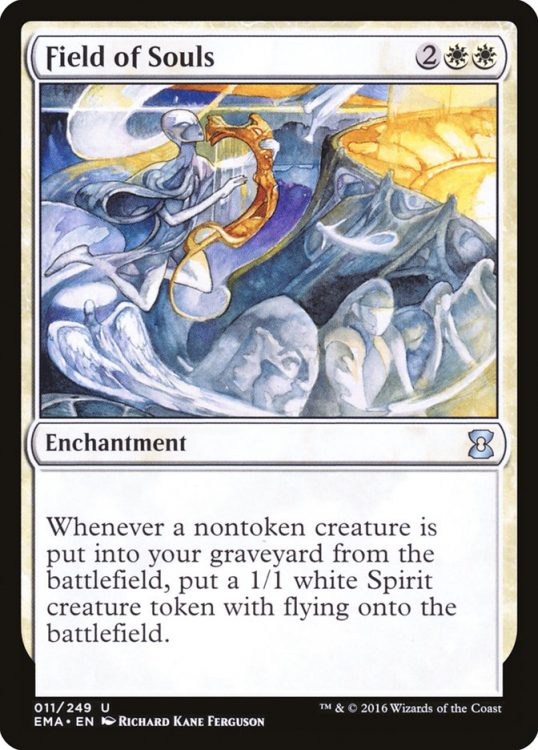 As you would expect, we have a number of ways to make extra tokens on addition to the ones Hofri makes, in addition to ways to get extra value out of our tokens. Quintorius, Field Historian offers us some great token production and serves as a solid lieutenant, while Field of Souls, Drogskol Cavalry, and Oyobi, Who Split the Heavens also give us additional sources of tokens. Anointed Procession and Song of the Worldsoul let us go nuts with extra copies of the tokens we’re making

Most of the time we want to be playing a fair, turn creatures sideways deck that also uses some effects like Fuming Effigy and Purphoros, God of the Forge to chip in damage and get the table low enough for our relatively small creatures to finish the job, but sometimes that’s just not going to get the job done. Whether there is someone hiding behind a pillowfort, with creatures we can’t swing through, or who is just trying to combo out themselves, we have our own combo lurking in the wings. We’re already running Karmic Guide because it’s a Spirit that gives us reanimation and we want a couple of free sacrifice outlets like Blasting Station in order to let us have some control over when our creatures die for Hofri, so it’s just a question of adding in Reveillark to complete the infinite loop. We also have a couple of tutors to get us either Blasting Station or Purphoros, and reanimation like Rally the Ancestors to get the creature portion of the combo back from the graveyard. 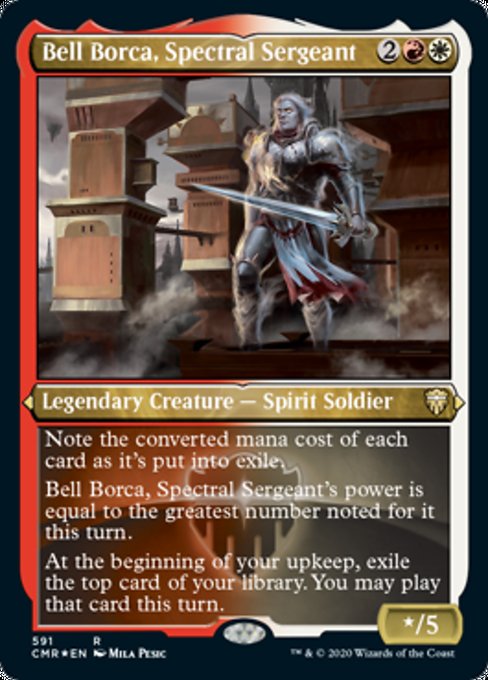 I’ll be honest, I think this deck came together better than I was expecting. When Hofri was first spoiled I had some vague ideas and some of them just didn’t fit in the final list, but I think they could certainly fit in one if you so chose. I ended up cutting a small counters subtheme, Sun Titan, and maybe most regrettably the Myojin. Sneak Attack fits in many builds, and I could easily see Spirit Bonds making it in after some testing of the initial list. The other big one that I so badly wanted to fit in was Devouring Rage. I may find room when I put it together in paper but the fact that your commander doesn’t have trample himself is a real hindrance.

Thanks for joining us for our latest bad but fun Commander deck! If you have any questions or feedback, drop us a note in the comments below or email us at contact@goonhammer.com.