Tribal commander archetypes are fairly common, though if you’re in a more casual group there’s a bit of an issue where several of them are really quite good.  Elves and pirates easily make the cut off for any kind of real deck you like; Zombies, Vampires, Wizards are all quite powerful, and humans help define the modern format, Ninjas are so strong they slide into cEDH territory and Najeela, the Blade Blossom does the same for warriors. For old time’s sake I’d love to play Rebels, but there’d need to be an Orzhov rebel commander, if printed today I’m sure Lin Sivvi, Defiant Hero would have B: target rebel gains menace until the end of the turn or something like that, and it would be perfect.

Handicapping your deck building by going hardcore on one of the bad tribes though can lead to more interesting or fun games if you’re having trouble matching up power levels at your LGS.  I’ve been looking for ways to match things up, the other night when my Atraxa planeswalker deck took infinite turns after resolving Tamiyo’s Emblem people sort of gave me some side-eye, even though there was a suspended worldfire hanging over our heads. 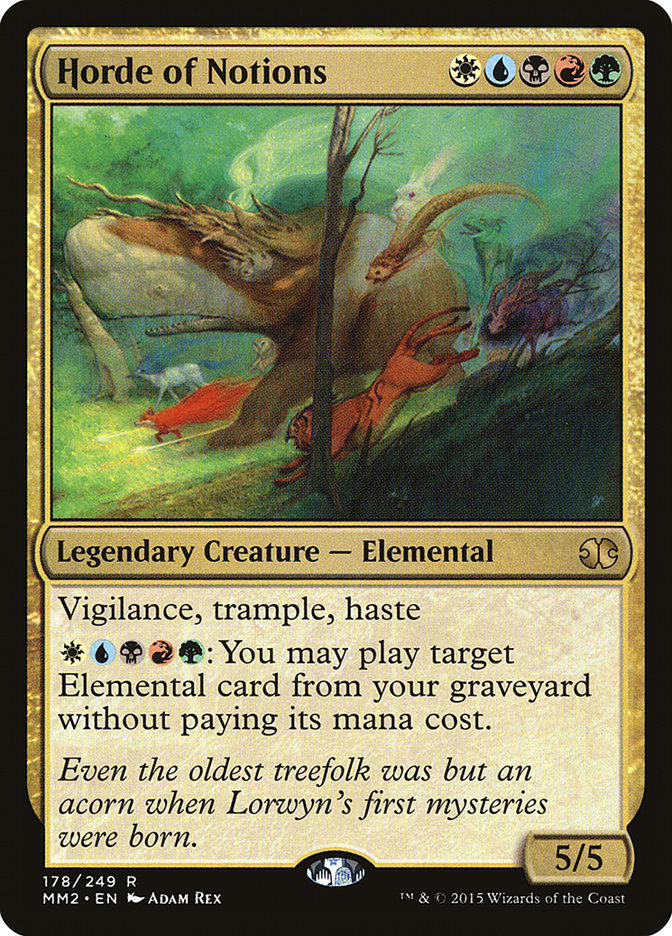 I think the elementals are really neat, but they suffer from that problem that a lot of such things suffer from: Too many options. There are plenty of neat cards, and a sideline in lands entering the battlefield. There are also evoke elementals, as well as vesperlark and revillark that return creatures to play.

Omnath, Locus of the Roil kind of hits all the important spots for regular deckbuilding, but for this exercise I wanted to play with the sort of “5-color good stuff” approach, though there’s not a huge amount of white and black cards in the deck, Shriekmaw, Muldrotha, the Gravetide, and Yarok, the Desecrated are definitely worth including, especially as almost all of the creatures in the deck have etbs, Yarok will really add a lot.  Muldrotha will let you recover from a board clear or something like that, though Horde of Notions has the same functionality.  Including black also means you can roll with Assassin’s Trophy and Abrupt Decay, among the best permanent destruction, flexible and cheap.

To have the deck play out successfully you really want Risen Reef.  Either ramping a land or drawing a card for each elemental you play will really benefit you a lot, so the purpose of the tutors in the deck is basically to grab Risen Reef, if you’ve already got that you can grab Fertilid for further ramping shenanigans, or some card draw, like Nevermaker or Slithermuse.  This should also be the default target for Flamekin Harbinger.  You can use Buried Alive to good effect given Horde of Notions.  Unfortunately, this won’t allow you to use Evoke costs, even though it’s “without paying it’s mana cost”, many of your elementals you’ll want to evoke by default so that they die once so that you can then Horde them back into play.

Do not under any circumstances stop ramping.  This is very much a go-wide strategy that also has the potential to go tall.  The interplay between Phylath, World Sculptor and Avenger of Zendikar and cards like Omnath, Locus of Rage and Titania, Protector of Argoth and all the landfall, and extra landfalls from risen reef, and using living twister to return lands to your hand so you can replay them.  Yarok, the Desecrated and Panharmonicon and Landharmonicon (Ancient Greenwarden).

At 6 or so mana the deck will really pop off, which is slow.  Really this is a battlecruiser type of deck, and it’s mean to play at that kind of table, really.  But it should give you a fair chance of protecting or recurring your permanents, and doing a bit of interaction, without shutting anything down completely.

There’s a fairly large amount of card draw, both from the elementals with etbs and Elemental Bond, Garruk’s Uprising and Guardian Project.