I have a love-hate relationship with abilities like Morph. It doesn’t quite work in the usual magic way, where you do something and your opponent can respond.  On the one hand that makes it powerful, and tricky, and allows you to do things that your opponent can’t predict or understand.  On the other hand, it’s kind of an unfun type of mechanic to exploit, especially vs newer players, which there are apparently a lot of in magic these days.

Kadena’s ability just begs to play a variety of toolboxy morph creatures, as a hearkening back to cards like Camouflage, Raging River, and Illusionary Mask in particular. Those were neat cards when they came out, when you could still drop a chaos orb on someone’s lands and take a game easily. Since then magic has sort of pared down what they wanted the experience of playing to be like to include fewer of these effects. Until recently, anyways – it seems like the people in control of “the Magic experience” have recently changed their minds and have started down the path of trying to turn Magic into something more like Hearthstone (Rob: This comes on the heels of the Jumpstart Arena: Historic Horizons announcement of a set with digital-only cards). I think it’s okay to separate the digital and physical card experience, but then again, it’s also not. There’s plenty of design space left unexplored, yet Magic is insisting on putting in purely digital cards. 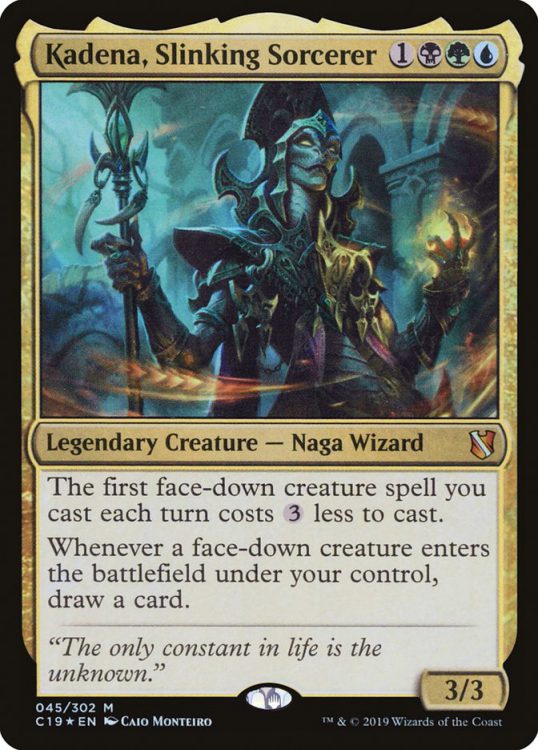 The truth is “Perpetual” already sort of exists on paper cards – check out Memnarch for an example – but it’s worth noting that Memnarch is an extremely problematic card. “Commanders” also have a similar mechanic, where you theoretically always know what card is your commander if it somehow ends up in your deck (not entirely impossible, but hard to pull off). Even in your deck, you know which card is your commander, but you still have to randomize. And there are effects which can cause things like counters to just move with a creature no matter what zone it’s in (Skullbriar).

I’m sure in Hasbro’s models some players who don’t play Arena will check Jumpstart out to experience the new digital-only cards, but I think it risks splitting the player base.  A lot of why people keep playing Magic is really just an exercise in sunk-cost fallacy. They’ve been playing for years and have invested lots of time and money into the game, so they don’t want to abandon it. Upsetting that apple cart badly enough risks truly alienating them, and the deluge of product releases and a new focus on digital-only content and relentless push into Commander really seems risky to me.

In any case, building a deck around Kadena is sort of an exercise in nostalgia: 2019 seems like it must have been 2 decades again instead of 2 years, and the commander format has advanced considerably since that time.

In and of herself Kadena is a decent value engine. Playing a creature for 3 each turn and drawing a card when you do is really pretty nice. The problem is that it doesn’t particularly scale; it’s once per turn, and there’s no kind of mana outlet involved.  A lot of really powerful value commanders, Golos, Tireless Pilgrim, Kenrith, Returned King, and Thrasios, Triton Hero can all have mana just channeled through them to win the game.

So Kadena is more of a friendly game-type commander, with a definite end goal in mind but a longer more interesting path to get there than generate infinite mana, funnel it through an always available combo piece, and end the game. The notable thing about Kadena, Slinking Sorcerer’s ability is that it’s once per turn – not your turn – so if you can drop creatures on other people’s turns, you’ll get the trigger, and if it’s a morpher, then you can do it for free.

Simic colors are great for extra untaps and gaining flash.  Vedalken Orrery is colorless, but Leyline of Anticipation and Alchemist’s Refuge are right on point, there’s also Teferi, Mage of Zhalfir but that is a dangerous card, and Vivien, Champion of the Wilds.  We won’t be including all of these but it’s worth noting them, especially if you need to swap out cards or want to experiment with the deck. 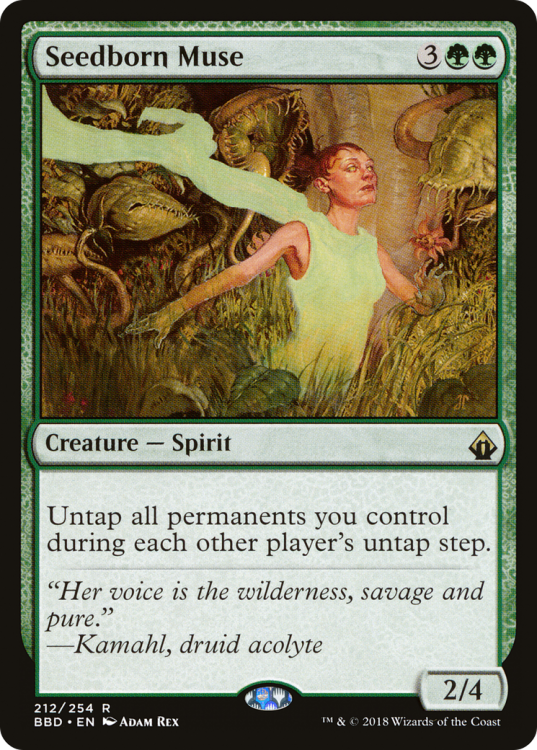 Sadly, Prophet of Kruphix is banned, it has both pieces we’d like, but there’s still Seedborne Muse and Wilderness Reclamation as well as Quest for Renewal.

If you don’t have sufficient creatures to keep dropping them on other turns we’ve included Thrasios, Triton Hero, Spectral Sailor, and Gretchen Twitchwillow as mana dumps, which ought to lead to more draws and then even more draws.  Pretty quickly you’ll be able to cycle through your whole deck, winning via Thassa or Laboratory mechanic. The whole “if you would draw, win” is a bit of a competitive mechanic, but the deck as built doesn’t currently run demonic consult or tainted pact. If you want to make a far more competitive version, swap out most of the morphing creatures and swap in those and just keep the counter spell creatures because, morph isn’t an ability per see, it’s more like a static effect of the card being morphed.  It doesn’t use the stack, and it’s definitely not a spell.  So if your opponent has a resolved silence, or a grand abolisher out, you can still turn creatures face up, and in fact you can do it even with a spell with split second on the stack.  It also get’s around things like Rule of Law (well casting a morphed face-down creature is still a spell but turning it up isn’t).

With a deck like this, you really ought to play it to the hilt, threaten that your down creatures could be creature control or could be counter- spells or could be deathtouch or something else.  The deck really hits its stride and will start to draw multiple cards a turn, and between Thrasios and Gretchen you should be playing multiple lands a turn, untapping them, and casting even more cards to draw more and get even more combat triggers.  Given the number of mana dorks and 2 land tutors, you ought to be able to drop Kadena on turn 3 very consistently, and start your might morphin’ engine revving.

In creature or board heavy metas it may be worth cutting back on draw triggers like Coastal Piracy and Reconnaissance Mission for more interaction, if you want to make the deck more combo-ey adding intruder alarm and Earthcraft as well as more ways to cast creatures on other players turns would work well.  In general you can outvalue non-infinite decks so you mainly want to save your trick counters for board clears and spells that threaten wins, or to protect your win condition.

If there is a commander you’d like to see a deck built around, or a mechanic, or a theme, or a tribe, please let us know, we’re open to suggestions.