Commander Focus: Karona, the False God says “FU, have this” 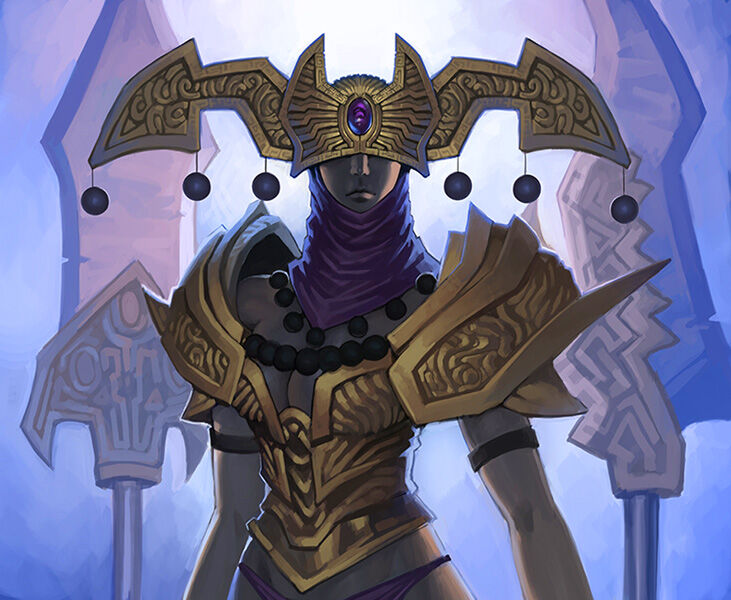 Credit: UDON, Wizards of the Coast

Karona, False God is kind of a strange card in a game that’s ostensibly two-player. Why play a creature your opponents are going to get to control? Karona’s effect is not entirely dissimilar to Overrun, a familiar finisher but at WUBRG1 Karona is an expensive way to get there. Really existing as a gimmick card and a piece of lore, but Karona can be a kind of goofy fun card in EDH.  Some players, sometimes, seem to play EDH in a very passive way, and Karona can sort of get the ball moving.

But there’s another possibility. There are a number of cards that allow you to trade permanents with other players, and since Karona’s control changes each turn, it’s a fairly safe card to trade away.  And there are also some permanents which are supremely dangerous to own. Permanents which, if you lose them, you lose the game.

The first of them, way back in Alpha, was Lich. Lich is a strange card, and arguably was never really playable; at BBBB its strongest ability is probably that you draw instead of gaining life. If Healing Salve becomes Ancestral Recall that’s a pretty good deal. But the downside is hefty – losing life causes you to lose permanents. And if Lich goes the graveyard, you lose the game. Even if it doesn’t, it sets your life to 0 as it enters play, so exiling it or trading it away won’t work.

But there are other cards like Lich. Cards that hurt if you lose them. There once was a competitive type II deck (standard) that was all about casting Delusions of Grandeur, then Donate to give it to your opponent. There’s also Delusions of Mediocrity, but both these cards involve losing 20, and 10 life, respectively, when you lose them. In the double life land of EDH, that’s not enough to kill a player outright.

There are still a number of permanents you can “give” your opponents that are worth giving, such as:

These are our wincons, essentially. The trouble of course – and this is often the trouble with clever or interesting strategies in EDH – is they don’t make you win, they make someone else lose. Making one player lose isn’t enough, and you’re forced into a kind of standoff position. You can put one of these pieces on the board, as a threat, treat it like you have 3 other players in check, and then if they try to win the game, give it to them, then remove it (typically via a flicker or bounce effect) causing them to lose, before they win. When you hit the player to your right’s endstep is when you’ll want to give away your check and set up another one.

The other main strategy of the deck is to trade lands with players. It’s particularly desirable to trade Thawing Glaciers and Undiscovered Paradise. Tap them, trade them, then they bounce back to your hand, even though your opponents control them, they don’t own them.

A lot of EDH decks can’t take being kneecapped on lands, and frequently shutting down someone’s ability to manafix can strip them out of the game. The deck also has a lot of enter the battlefield effects from creatures; a lot of them bounce or flicker, but you can easily use these as “tradebait” once they’ve done their etb effect. While some of your cards will allow you to leverage them being in play, some of them allow the effect to target creatures you don’t control. You can easily create domino scenarios where you trade away 2 or 3 creatures, flickering one of them and it comes into play under your control, allowing you to flicker the next as each comes into play under your control.

The trouble with all this is that it’s sort of unpleasant for other players to play against. Mass land destruction is typically frowned upon in EDH, and there’s often a sort of attitude that players should be allowed to play their decks out and see who wins that way. Similar to footraces, it’s okay to run fast, or even faster, or even more fastest-er, but if you’re running a marathon you can’t throw a boomerang at someone else in the race to tangle their legs or injure them. You certainly can’t cut someone else off at the knee.

Karona, False God and this deck will often do just that – take away a key piece or lands and prevent a deck from interacting. Which sadly may simply cause a weird kind of “slow race” to be in second, so you’re not targeted, and can successfully go off after the first player tries, and fails. EDH is inherently political, and decks like this even more so. Many players may bemoan or decry it, but you’re often forced with the necessity of making choices.

Personally, schadenfreude is a pastime of mine, and I have no particular desire not to be a salt miner. I think this deck fits particularly well into that mindset.

To pack these control cards and non-compact win cons leaves little room in the deck for standard interactivity, and that’s definitely one of the weaknesses of the deck.  Most of the interactivity is built around the blink/bounce cards, so saving them for a chance to shut down a combo piece or remove a target and playing them sparingly is critical to execution.

For ramp, there’s the standard package of multicolor elves: Deathrite Shaman, Noble Hierarch, and Birds of Paradise, as well as Avacyn’s Pilgrim and Elves of Deep Shadow.  Dockside Extortionist is particularly nice to trade away and blink back, giving you treasures (which you can trade away) and fixing your mana.  The standard 2 cost mana rocks, as usual.

Here’s Karona and “FU, have this”

Next week, we’ll look at building around Black/White lifesteal vampirism under the lead of Lurrus of the Dream Den. In the meantime, if you have any questions or feedback, drop us a note in the comments below or email us at contact@goonhammer.com.