Okay, you want a deck you can build for a whopping $160 dollars, here you go.

Eminence, in my October opinion, is a really underused mechanic. I understand the logic: Magic is largely supposed to be about things in play doing things. Spells are generally single-shot things – storm and flashback aside – and abilities like Forecast certainly exist. But permanents that do things from your hand, or spells you can essentially cast over and over by revealing them well, it just seems to sort of violate the natural order of things. Commanders already shape the game from outside play however, by generating your deck’s allowed colors (and I’d be willing to bet WotC will push the design even more and do something eventually with commanders that affect deck construction in some way), and as long as they don’t get too carried away it feels like there’s some good design space there.

There are also 5 commanders with abilities that function in the command zone. Four of them are keyworded with Eminence, arriving in the Commander 2017 release, and their precursor, Oloro, has a similar non-coded ability:

For this deck we’re going to be building around the second best of these options. 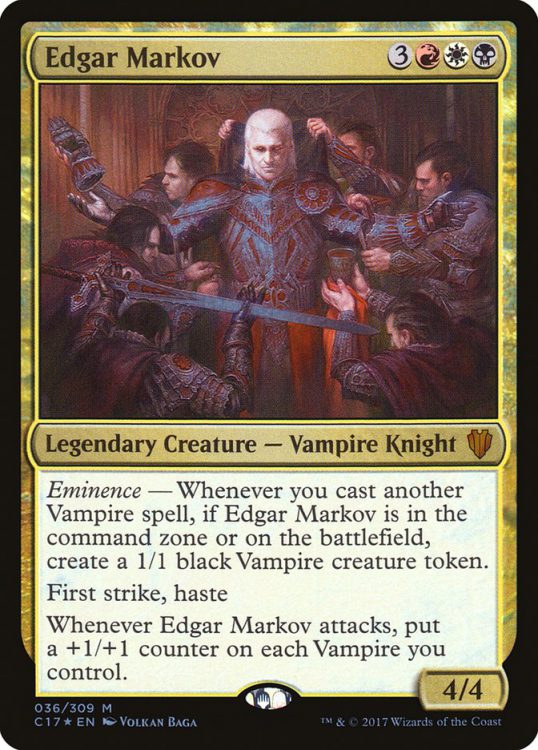 White is the color of life gain and some recursion, red is the color of triggers off sac effects and some good group slug and control, and black flourishes in the realm of “on death” triggers as well as powerful graveyard recursion. This deck is largely a variant on a theme, but it does reflect on how to build more affordable decks, especially since many of the powerful triggered cards in black happen to be commons. Those trigger effects that we’re focusing on ping your opponent(s’) when creatures die. There are also useful vampire (and non-vampire) cards that will cause you to gain life when your opponents lose life. Since we’re playing lots of vampires, that gives us lots of Markov triggers, creating token vampires. Finally, red let’s us run Mayhem Devil and Havoc Devil, both of which generate pings when creatures (or any permanents) are sacrificed. That’s just great synergy – the real kind, not the corporate buzzword kind.

Potentially you can end up with a scenario like this:

All from a single token entering play due to a trigger.

If you have Blood Artist you could use your Mayhem Devil ping to target another players 1 toughness utility creature, netting yet another death, yet another life loss ping to one of your opponents, and yet another life gain trigger, meaning Vito, Thorn of the Dark Rose will trigger again. There’s a couple of ways to make this go infinite, though the easiest, Exquisite Blood is not in the deck solely due to cost concerns. If you happen to have one, I’d suggest running it.  Oathsworn Vampire can also pretty easily go infinite, though Phyrexian Altar is also excluded due to cost concerns. Even so, it’s a powerful card to generate vampire tokens, and death triggers, and a potential sacrifice target as well as being a non-token to trigger Grim Haruspex and Midnight Reaper.

Since the deck runs so many life gain triggers you can safely include cards like Greed, Erebos, Bleak Hearted would also work and have a similar effect if you want to upgrade or happen to have one, and is also able to sacrifice creatures. Sometimes you’ll just need a sacrifice outlet, to generate your triggers and get things going, and the control options he makes are also handy. His indestructible nature is also a boon, as this deck is vulnerable to board clear, though if your opponents are dashing down wrath of god you want to really punish them with tons of life loss.

Your basic game plan with this deck is to hope for some early game ramp.

The deck is running virtually every available 2 cost mana rock, so that you can quite consistently drop a rock on turn 2 and sometimes your turn 3 will even consist of just dropping 2 rocks.  Once you have some triggering creatures on the board you’ll want to be consistently casting vampires and sacrificing for draw so that you can cast more vampires and cast them for draw, which hopefully will draw you into more vampires you can cast and sac for card draw.

It may be tempting to see Edgar Markov as a go-wide, turn sideways type of commander. His ability to put +1/+1 counters on every vampire you control is pretty good for going wide. It’s just that going wide is so bad. To really leverage it you’d probably want to focus on token creation in your creature choices, running versions of Sorin, and a lot more white cards for a more Orzhovy deck. That sort of deck also probably wants to run extra combat cards that untap and let you attack again, but that’s a whole other level of complexity, and is still vulnerable to board clears, but doesn’t really punish your opponents for doing so, and the cards mana value is higher, so…

The deck list also contains a hefty list of cards in the considering board.  The straightest, fastest way to upgrade this deck is to put better lands into it.  Fetch lands and shocklands would let you both thin the deck and easily mana fix, as well as generating useful sacrifice triggers for your demon and devil.  Lurrus, of the Dream Den would let you replay your cheap creatures from your graveyard for even more sacrifices and tokens (casting in this way will still trigger Markov).  Adding the 0 cost if you control a commander spells are sort of a mixed bag for this deck, because unusually enough you won’t often be casting Markov, he’s just there to eminence you more tokens into play.  But even at “not free” cost those spells are decent control spells, the ability to grant indestructible will almost certainly save you from board clear.  Land Tax is just an amazingly good card.  Phyrexian Altar, K’rrik, Son of Yawgmoth are all included  as possible ways to go infinite, or just power through the deck, with K’rriik you may well be able to just keep casting and drawing into more draw generating life gain fast enough to mow your opponents down.

Next week, I’m still feeling quite rouge-ish and plan to finish that write up, but someone asked for help with a commander on the cheap, and this is the result.  As always if you want to see a commander

Have any questions or feedback? Have a deck you’d like to see us build or a concept you want to see built around? Drop us a note in the comments below or email us at contact@goonhammer.com.