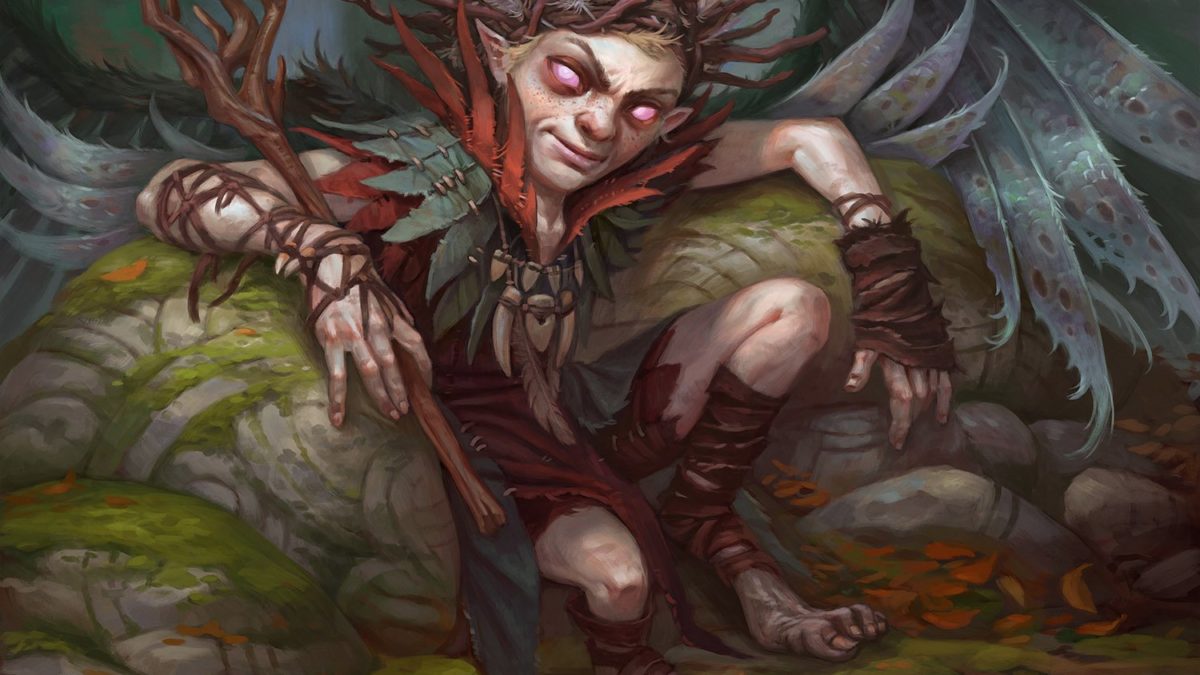 Faeries and rogues are cool. And there’s this thing floating around, which is kind of cool:

Which is one of my favorite heroes in 12v12 (though that’s a story for another day), but it does also lead to this:

Which, like most made-up magic cards, is really pretty strong. Pretty strong. And it’s also distracting me from the point, which is that faeries and rogues and faerie rogues are two tribes which have a lot of good cards, and it seems as though Wizards of the Coast are pushing to see more rogues and rogue decks with cards such as Anowon, the sneak thief, which I discussed in my Zendikar Roundup for Commander.

The “default” commander for faeries typically is Oona, Queen of the Fae but sadly at 6 CMC she’s fairly expensive, and while her mill / exile mechanic can generate a lot of ETB’s and offers Dimir colors and the prospect of a flying beatdown engine; a faerie wizard herself she generates faerie rogues.  There are a number of decent prowl cards, and plenty of “whenever a rogue” frequently whenever a rogue deals combat damage.  Since these faerie rogues almost always come with built-in evasion in the form of flying, there’s some worthwhile synergy there.

Sadly though  Rankle, Master of Pranks is probably in the end the stronger commander.  Especially if you’re not so much worried about faerie tribal or rogue tribal and just a straightforward lock deck.  I think Rankle is actually meant to be Shakespeare’s puck, thus the weird floating faerie dragon.  If you read a Midsummer Night’s Dream Puck is sort of meanspirited as a prankster, though the play is a comedy, he’s actually a somewhat unpleasant character and not quite the fun-loving prankster he’s often represented as.  Think more Jackass and less Candid Camera.

There are lots of ways to try to lock down the table, preventing casts or preventing activations.  Mycosynth Lattice and Karn, the Great Creator is a virtually inescapable hard lock once they’re both on the table, and they’re both colorless mana only, so not entirely unobtainable.  This sort of thing is generally referred to as a hard lock, once established it’s difficult or impossible for other players to escape from.

Rankle doesn’t offer that kind of lock, but he does offer a sort of soft lock, with his three triggered abilities we can force sacrifices and force discards, and once players out of cards we can make them draw and then discard.

I call this kind of deck a “commander on a stick” deck, because the deck revolves around the commander, and revolve around having the commander in play and letting it do it’s thing.  For that reason it’s important to try to protect your commander as well as possible.  In a mono-black deck that’s a relatively difficult task.  Black lacks counterspells, and one of the easiest ways to shut down a Rankle deck is to just counter the commander.  Ticking up the commander tax repeatedly will keep the deck from getting going, a position from which it will snowball.  An odd out of pie card like Imp’s Mischief can save us, and we can also play cards that will make creature spells uncounterable.  Sadly most of these are out of our color identity (because they’re green) but at 4 CMC you can often get Rankle out before anyone is ready to counter, and players frequently won’t want to waste a 0 CMC counterspells to stop him, since he’s not immediately threatening a win, and generally such spells are preserved to protect a combo or stop one.  Of course, this is one of those things that you’ll have to discover how your own meta works and what your pod will and won’t allow.  There’s also an argument to be made that Rankle isn’t a commander particularly conducive to fun interactive games, since once he’s on the board and protected with hexproof, he’ll attack every turn and usually force a sacrifice + discard, over and over, until the game ends.

So that basically summarizes our win con: cast Rankle, and hit people with him.  In addition to combat damage, we’ve got a number of cards that penalize players for discarding or cards going to their library.  And that’s really it, Rankle will come out swinging, and beat our opponents down handily while forcing cards out of hand and forcing them to sacrifice their creatures.  To enable constant sacrifice we have a number of creatures that return to play or hand from discard, and paying this “upkeep” is where most of our mana is going to go.

To get to our wincon, well it comes straight out of the commander zone, so we don’ need to tutor or draw into Rankle.  Nonetheless, we do need our enabling pieces, so sometimes we’ll use Rankles draw ability.  This is dangerous because it is putting solutions and combo pieces into other players’ hands.  But Rankle is a kind of all in strategy type deck.  If you go for a soft lock and then lose it players will often prevent you from recasting the pieces, and since Rankle doesn’t go infinite or end the game suddenly it’s fairly dangerous to not try to rush into that lock.  Rankle is vulnerable to Wrath of God type effects even when hexproof.

For control and protection we’ve got the standard suite of Murderous Rider, Snuff Out, Deadly Rollick, Go for the Throat, Dark Withering (via madness).  Sadly black doesn’t offer much in the way of counter or protective magic, so despite the fact that Rankle has haste to begin with we’ll run Swiftfoot Boots and Lightning Greaves.

To power, all this is essentially a bunch of swamps and the better mana rocks.  Sadly for a mono color black deck, there’s not a lot of shocking options, but we really want to get rankle out and swinging as fast as possible.

Other than that most of our array of cards either complement the discard and sacrifice combos or offer general utility to black.

Bloodchief Ascension is a chronically underplayed card, and Geth’s Grimoire and Waste Not will lock us into a very powerful board state.

Rankle has 3 toughness so we can run a bunch of 2 damage or -2/-2 effects to try to clear out smaller creatures.

The thing about a soft lock deck like this is though, in some ways, it’s not hugely interesting to play such decks.  They play in a relatively linear fashion, ramping up, dropping Rankle, and attempting to establish the lock.  Other players will be forced to stop you, and if they can’t, you’ll win relatively short order.  Some strange decks may be able to play under your stax state, such as Gitrog, but in general, a lot of decks will be locked out due to needing to sacrifice their commander or all their utility creatures, and in a 4-way game there’s almost always someone you can swing Rankle at.

In the end Imp’s Mischief probably won’t save us, so it doesn’t make the cut, and we have some big fattie reanimator targets like It that Betrays and Gary, the Gray Merchant of Asphodel.  It that Betrays will take our opponents creatures when they are sacrificed, and we can sacrifice Gary over and over to keep reanimating him.

Next Week: Neyith of the Dire Hunt