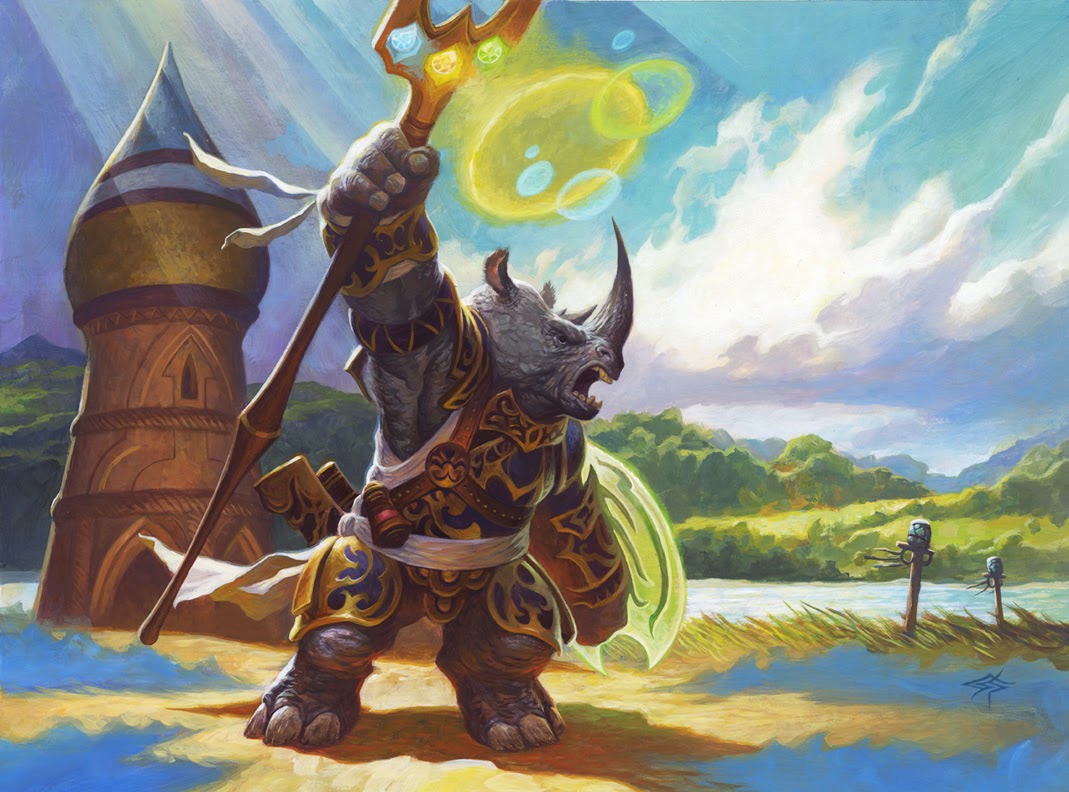 This week I’m returning to what most would consider an old deck, way back to Commander 2013. Enter the battlefield effects are one of Commander players’ favorite things to play – which is perfect for Roon – so we’re trying to grind our way to victory one creature at a time.

The Commander: Roon of the Hidden Realm

Roon lends himself very obviously to an ETB focused blink/ flicker deck with his activated ability. He’s not incredibly powerful, but he ensures a steady stream of value that can turn into an unstoppable flood if you find the right pieces. He’s not huge either, but 4/4 is respectable, and the vigilance and trample mean he can attack in to players with utility creatures or tokens for blockers while also keeping his activated ability up. This archetype has been heavily supported in Bant over the years, and there is an absolute ton of room for customizing what you want to be blinking. Finally we have the ability to use our blinks offensively, to prevent attackers from coming at us, or ensuring they don’t connect if they do.

We’re leaning heavily into the creatures this week, largely eschewing traditional artifact or sorcery based ramp. Instead, we’re looking for cards like Wood Elves and Farhaven Elf to fetch lands from our deck, Coiling Oracle and Oracle of Mul Daya to take advantage of the top of our deck, and Uro, Titan of Nature’s Wrath and Azusa, Lost but Seeking to put the extra lands we will be drawing into play. Smothering Tithe provides us with some extra Treasure, and Zendikar Resurgent and Mirari’s Wake serve to double our mana.

One of the reasons this deck is a little lighter on some card types than usual is the amount of card draw stuffed in to it. We do have some limited tutoring with cards like Fauna Shaman, Fierce Empath, and Recruiter of the Guard to give us access to our suite of situational tools, but our other plan is to simply draw enough extra cards to make us likely to draw into what we need. We have creatures that draw a card when they enter like Mulldrifter, enchantments like Guardian Project to draw us cards when creatures ETB, and Zendikar Resurgent to draw when we cast creatures.

We have a few pieces of traditional removal like Krosan Grip, but we also have multiple creature based ways to deal with problems. Aura Shards turns all of our creatures into Knight of Autumn when we flicker them. Reflector Mage bounces creatures and keeps them from being cast for a turn, perfect for buying you time to search up a Mystic Snake and deal with it on the way back down. Nevermaker is included because it is a rare leaves the battlefield ability, so it can deal with Torpor Orb. Luminate Primordial gives us repeatable exile, and Woodfall Primus blows up noncreature permanents while allowing us to remove the persist counter with our flickering. Perplexing Chimera gives us a weird way to steal our opponents spells and have a chilling effect on the game that we can flicker back to our control again and again.

Our boardwipe suite is limited, with only Sunblast Angel and Wrath of God, but we have ways to chain creature tutors together to fetch the Angel and plenty of ways to get Wrath back with Eternal Witness and Riftsweeper.

In addition to Roon, we have further ways to flicker with Mistmeadow Witch, Eldrazi Displacer, Soulherder, Brago, King Eternal, Conjurer’s Closet….a bunch. We have a bunch of ways. Knight of Autumn gains us life, Angel of Finality gives us graveyard hate, and Glorious Protector and Avacyn, Angel of Hope protect us from wraths. Seedborne Muse and Murkfiend Liege untap us on other people’s turns and turbocharge us, while Panharmonicon and Strionic Resonator similarly take us up another notch. Progenitor Mimic and Clever Impersonator let us copy the best things on the board, which we can reset when desired. Thousand-Year Elixir gives Roon pseudo haste, and gives him an extra activation. Vedalken Orrery lets us play at instant speed, which is incredibly powerful.

While we prefer to play a fun, grindy game, it never hurts to have an ace in the hole, and in this case we’re packing famously fair Magic card Palinchron. Paired with also extremely fair Deadeye Navigator, we have infinite mana and flickers, at which point we can gain infinite life, blow up all of our opponents noncreatures with Woodfall Primus…..if you can’t figure out a way to win with infinite mana you need to try a little harder. I happen to be running Palinchron because I’m old and I own it, but the more budget conscious can accomplish the same thing with cards like Peregrine Drake. As a side note, remember when Deadeye and Consecrated Sphinx had the community clamoring for bans, and then over the intervening years Wizards printed such power creep that neither card sees much play anymore? I remember.

This deck has a ton of synergy and is great to play, with a very rewarding feeling of snowballing out of control when you start drawing multiple cards with each game action, dodging wraths, removing any threats your opponents play, and looping counterspells. It is very heavily creature based, so once you start to get your engine going, holding up a way to protect yourself from wraths is crucial, as overextending into a poorly timed wrath can be completely devastating. Depending on your meta, there are a ton of things you can do to give yourself extra breathing room with cards like Teferi’s Protection, extra flicker effects, or just about anything you want really, the core shell is very resilient.

Thanks for joining us for our latest kitchen table Commander deck! If you have any questions or feedback, drop us a note in the comments below or email us at contact@goonhammer.com.