With the release of Kaldehim Wizards effective (re-)introduced the concept/mechanic of “spell trample” and it’s one that, as a design space, I really like. It fits really well with red, and having it on more spells would really shore up a weakness for red, which is that frequently spells deal “too much” damage, and it seems kind of wasteful. In some sense, it doesn’t really matter, if you cast terror on a creature with 4 toughness or 3 toughness or 7 toughness it dies, if you cast a lightning bolt at a 2 toughness creature it dies, and you’re trading one care for one card, just like with the terror. But it feels wasteful. I also think the idea of dealing excess damage over what’s needed to kill a creature to a controller makes sense, though I’m sure in standard it would be extremely problematic and push red as an archetype really far. 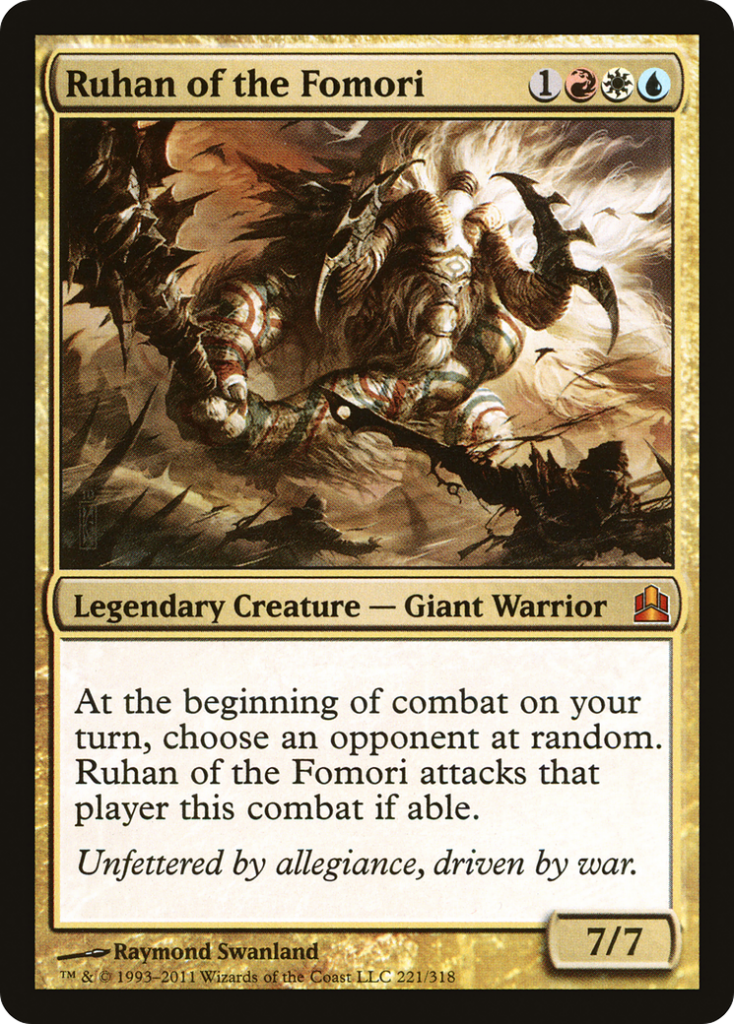 For commander, I think it would increase red’s viability to have less wasteful ways of doing damage. Some great Red board clear and mass damage cards like Earthquake or other staples become lackluster because white (and black) have multiple “destroy all creatures” spells which simply don’t care about toughness and don’t have to pay a premium to remove larger creatures. Red has a number of spells at decent mana cost that deal damage and will clear out utility creatures, but many of these spells top out at 2 damage, and WotC has been printing a lot of commanders with a big fat ass and no power, to make them rather difficult to clear off the board. Commanders or cards printed into commanders that benefit from having more efficient mass damage around would go a long way to leveling this playing field. Right now, if I want consistent board clears I look at white, rather than red, which is sort of backwards if you consider what the color pie is supposed to be.

If we want to build around doing mass damage, Boros has a number of cards that punish your opponents when they take damage:

Stuffy doll and Brash taunter are invulnerable, which is nice. There’s also Fiendlash, which effectively gives your creatures the same ability.

Boros has another little mechanic going, which is damage reduction to your permanents.  It’s only on a couple of cards, unfortunately:

Finally, the deck has another sub-theme. It gives creatures to your opponents. This can be a bit dangerous: If you hand creatures to an aristocrats deck, you’ll be in a fair amount of trouble, or really any deck that has ways to sacrifice creatures as fuel. Thankfully a lot of these cards let you choose who gets the creatures.

These are in the deck so that your opponents will have creatures to spell trample if you can resolve Toralf, God of Fury or Aegar, the Freezing Flame. Aegar will just let you draw a ton of cards, but Toralf and a Star of Extinction or a Blasphemous Act should be game.

There are a lot of rocks, because this deck has quite a few high casting cost spells and x-spells to just dump mana into.  Normally I wouldn’t advise using 4 mana value rocks like this, but it’s a 4 mana commander, and your big spells require a huge jump in mana cost, these should let you get there.

Ruhan is in the deck mostly for color identity, but he fits perfectly.  He’s a giant, so combos with the other giants that are you main win-con alongside cards like Quakebringer or Thundercloud Shaman or Calamity Bearer.  As a 7/7 who auto-attacks, he ought to start chopping into your opponent’s life totals quickly, and he’s got a big enough butt to survive earthquakes and things you’ll be casting. 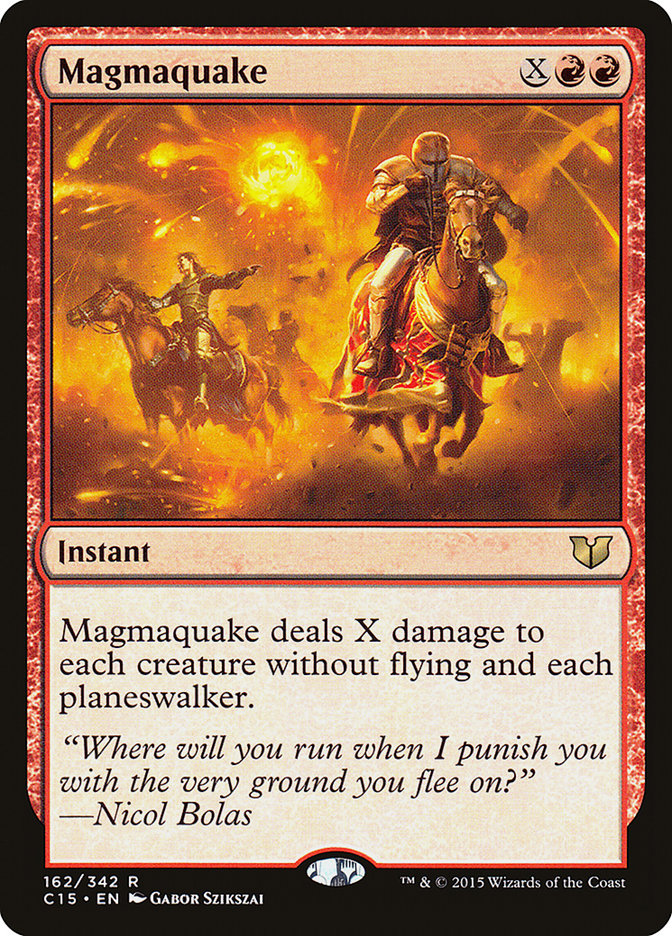 Several of the X-spells themselves are instants: Fault Line, Magmaquake, and Starstorm, which is really nice, but this deck is kind of a haymaker deck, and you’ll generally be casting a big creature then trying to resolve a big spell on the next turn.  This is definitely unfortunate and definitely de-powers the deck, but a commander that attacks at random aren’t exactly the sign of an extremely powerful deck. I think this ought to slot in nicely at mid-range, though it will have some spectacularly good games and others that won’t.  Relying on interactions between unusual sub-themes is difficult using singleton cards.  An early Varchild’s War-Riders and then drawing into a Toralf, God of Fury and a Blasphemous Act should be an easy game-winner, but there’ll also be times you just don’t have that, or that you’re even handing creatures to your opponent’s deck which desperately needs creatures to sacrifice.

There’s also simply not a lot of tutors or card draw in the deck, so you’re basically relying on getting what you need from top-decking for the most part, and relying on the inherent interactions between the cards.  I think that’s totally fine for some games at the LGS.  Creating this deck has inspired me to create another one, with a similar theme, that will ultimately be far more controlled and consistent.

Next week – Zurgo Danger Zone, a mardu version of a similar theme, and a good way of seeing how to take a deck idea and upgrade it to make it more consistent and powerful.