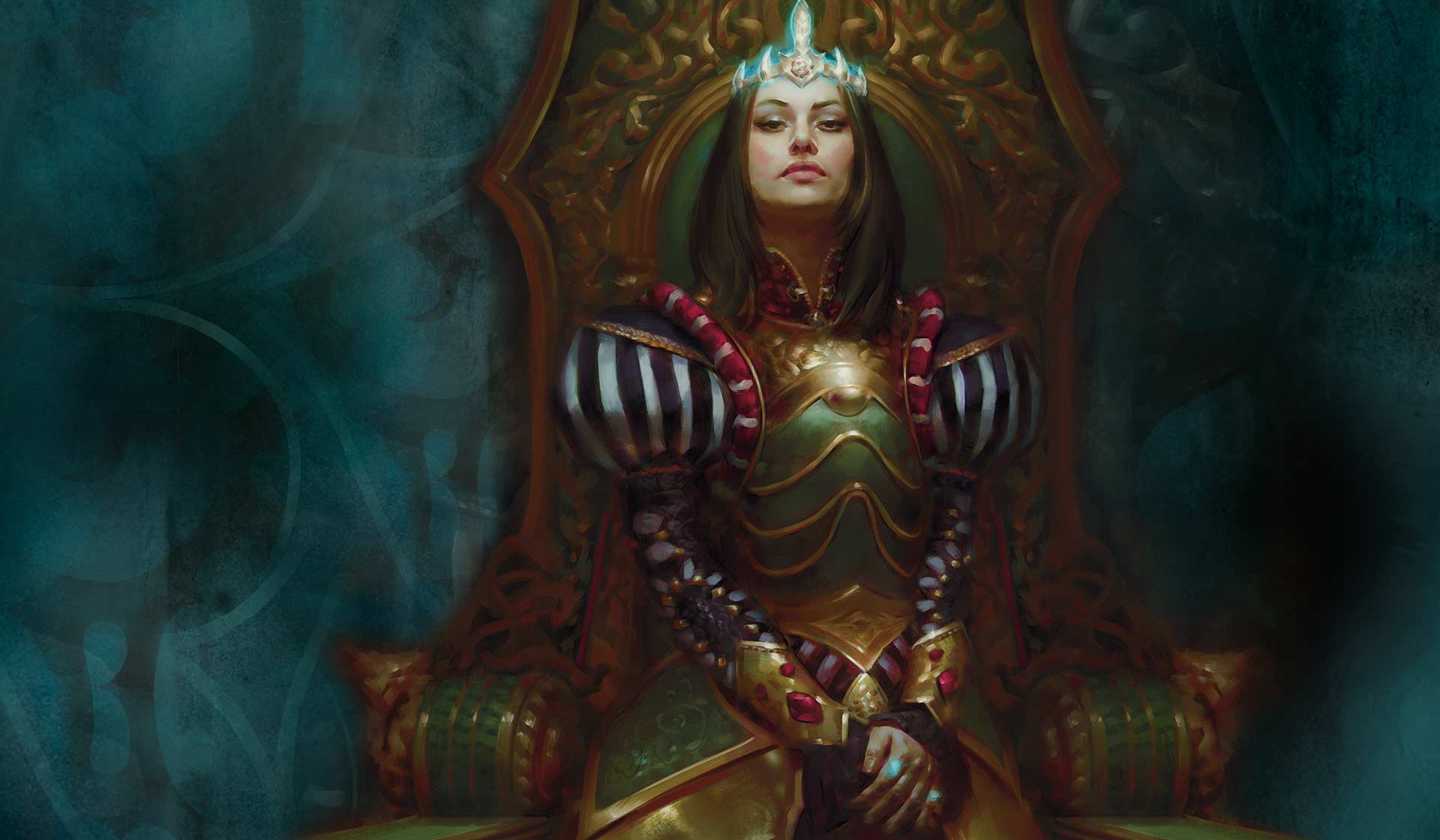 In Commander Focus, Pseudanonymous looks at key Commanders, how to build around them, and what makes their decks work. In this first installment, he’s looking at Queen Marchesa.

Queen Marchesa represents a stable platform from which to stax the game, particularly by limiting spells per turn cast, and then recurring creatures from the graveyard in a group-slug-esque style that will grind out a win via stacking triggers and a smattering of control and card draw. Becoming the monarch will either lead to significant card advantage or lead to a game with players attacking and you getting to create hasted/deathtouch tokens every turn, which plays into a strategy of creatures entering and leaving play and creatures dying.

Queen Marchesa is arguably not one of the strongest commanders around. While there’s nothing particularly wrong with Mardu, if you take a look at competitive decks, you’ll see a preponderance of Blue and Green, and then frequently a smattering of Black, White and Red. While every color brings something to the table, Blue has some of the strongest cards in Commander, especially the zero-cost counterspell suite, as well as card draw, instant and sorcery tutors, artifact tutors, creatures that can’t be blocked, the trio of win cons that revolve around emptying your deck, taking extra turns, creatures that untap lands as they come into play (a frequent source of infinite mana), as well as being the home of a lot of cards that, frankly, don’t fit well into the game or the color pie. For the longest time it seemed like R&D just socked away every really weird card into blue. Green offers immediate ramp and mana fixing in the form of the 10 elves, as well as land ramp, land tutors, and creature tutors. Black offers the best tutors in the game, recursion, suicide strategies, and consult/pact. White has the best stax creatures and effects, some good creature removal and recursion. Red offers a number of cards that are good alone but they don’t make up any consistent strategies.

If we were to build a competitive deck from the top down, we’d probably look for either a combo or value commander who offers Blue, Green, Black, White, Red in that order. Marchesa is decidedly value, but her colors are frankly not as powerful to build around.  However one of the most consistent stax effects in commander are Rule of Law type effects (the other is probably restricting untapping). Staying in the game in commander often relies on stopping your opponents from ending it before you can. Many decks rely on blue, zero-cost counterspells to achieve this. But having Rule of Law, Deafening Silence, Eidolon of Rhetoric, Ethersworn Canonist, and 5 tutors that can fetch these cards gives us a really good chance to get a stax effect off and stall the game out. Since ending Commander games often relies on casting multiple (or near infinite with storm) spells in a turn, this will slow down and stop many decks. For a secondary stax effect we have Blood Moon and Magus of the Moon.

With Marchesa we can generate a lot of triggers off of creatures dying or being sacrificed or entering play. We’ll either be the monarch or else generating our assassins, which are helpfully hasty and deadly, giving us a way to regain our monarch status or else cause 2 creature deaths, gaining value from our many death triggers. A lot of what we want to do is based on re-animating creatures through weird loops. One particularly fun combo is Doomed Necromancer or Apprentice Necromancer+ Sun Titan + Necromancy or Animate Dead or Dance of the Dead.

Necromancer reanimates Sun Titan, and Sun Titan returns a raise dead enchantment which returns another creature to play. Or the Sun Titan can simply return the necromancer that raised it. If we have Anger in our graveyard, the Sun Titan can immediately attack, returning another permanent.  It’s also worth remembering if you have land problems that Sun Titan puts a permanent into play, so you can return a land, returning Bloodghast (if it’s a fetch land and you have a sac outlet, you can sac the Bloodghast once you have the land, then return it again with the land you fetch).

Lurrus of the Dream-Den and Alesha, who Smiles at Death will also allow us to reanimate other reanimators such as the necromancers, then reanimate something else. Bloodsoaked Champion, Reassembling Skeleton and Bloodghast have effects to return themselves to the battlefield without casting creatures.

I’ll be honest the origin of this deck is rooted in one of the players in my pod’s hatred of Cat Oven (Cauldron Familiar was recently banned in standard, neutering the deck) and a desire to bring the combo to Commander (so he could never escape it), and I could become a miner of NaCL.

Mayhem Devil will generate an appalling amount of triggers in EDH, from crack lands and other sacrifice effects are common.  Putting one in play will almost surely stop a food chain deck from going off, and let you ping out utility creatures and commanders without a lot of junk in the trunk.  Priest of Forgotten Gods becomes tremendously powerful in EDH as it targets any number of players to force sacrifice and loss of life, generating, in theory, a return of 1 card off it’s draw, and particularly given our recursion engines we should expect to net significant advantage from this card.

One of this deck’s weaknesses are cards that shut down graveyard recursion.  Bojuka Bog is becoming quite common as it has very little downside, and can shut down a deck entirely.  Rest In Peace and other such effects can make it very difficult to operate, and the stax effect from Rule of Law et al will make you a target for other players.

In our normal deck building order, we’d say our win-con is damage from creatures dying and sacrifice triggers, we have a number of game-ending combinations, and Tombstone Stairwell will cause a nearly unholy amount of etbs and death triggers (with sacrifice).

Gravecrawler + Phyrexian Altar + any Zombie + any life loss on death / sacrifice or etb will allow us to cast Gravecrawler repeatedly, though we are ourselves staxing out this effect generally.  But sometimes your opponents, in an attempt to end the game, will helpfully remove your stax effect.

The effect of making someone the monarch and putting hasty deathtouch assassin’s will help ensure the game doesn’t devolve into a stalemate, and even if the deck isn’t amazingly “good” one of the things I like about it is I anticipate it leading to fun games with big swings as stax effects or powerful creatures come onto and off the board.

If you prefer a more combo type deck you can harness the power of Carnival of Souls, which is a dangerous card but can easily generate the mana you need to continue recurring something from your graveyard to generate etb effects. Thopter Squadron  + Carnival of Souls lets you generate a token, with an etb that pays for itself, then pay 1 to sac a creature, generating a sac and a death over and over.  Creatures like Sengir Autocrat would also allow you to generate a lot of deaths and ETBs. With a deck like this I’d suggest packing a significant sideboard and experimenting with different combinations; it may well pay off to cut down the death trigger creatures in favor of more powerful recursion targets – there’s always the boringly powerful Razaketh, the foulblooded.