I sort of identify as an Azorius player; or a blue player, generally. Long ago, when Extended had a deck that was essentially 32 counterspells, thieving magpie, morphling, and faerie conclaves, that’s what I played. Back in the long long ago – in the Great Before time when cards were new, I remember playing white. Island Sanctuary. Serra Angel. Circles of Protection. I don’t really recall why, though the impressive additions to the anatomy of the Serra Angel (she was more plains than mountain) might’ve been a factor. Also, banding was a truly confusing ability. It might’ve also just been because I had a friend who played black.

To this day, I default to counter magic and stax pieces in my play, essentially what most players consider anti-fun. Maybe I have a need to feel in control?

Mardu, the combination of Black, Red, and White, is nearly – but not totally – the opposite of that. You can still run stax in white, and there is plenty of group slug, but I keep forcing myself to make red/black decks and something else. Back before the format was fundamentally warped by overly strong commanders, I think Syr Gwyn, Hero of Ashvale would’ve been a great card. For battlecruiser-type games, I think Gwyn is perfectly appropriate. It’s a mid-range commander who rewards attacking. Equip 0 for knights is pretty good, and getting card draw off attacking equipped creatures is great.  It even makes a kind of thematic sense, and you can make a “tribal esque” or purely tribal deck pretty easily. 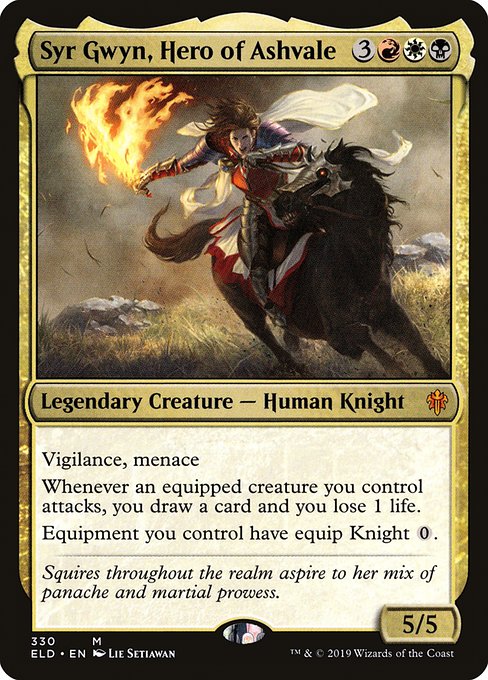 For fun I wanted to use the land tax and tithe mechanic to get more land into hand. In Mardu colors, especially if you’re locked down to a theme, it doesn’t work out that strongly. If you’re willing to run cards like Walking Atlas you could do something entertaining here, and potentially powerful. Lotus Vale and Lotus Field let you sacrifice lands to get more powerful lands; if you’re then able to leverage your smaller number of total lands in play somehow you could potentially really do something. If you combined this with things like powerful landfall effects like Omnath, Locus of Creation and Tireless Tracker, you potentially have a whole deck brewing. If you combine this with a token generator and say, the bounce lands and Kodama of the East Tree then you could generate infinite landfills, infinite tokens, etc.. So there’s definitely something here, especially when you consider blue has the creatures who untap lands when they enter the battlefield like Peregrine Drake and Cloud of Faeries and the famous one, which famously nets you infinite mana if you can generate 12 mana with 7 land, yes – Palinchron. What even is that thing. A dinosaur bird chicken (yes yes I know) with… and its body is so fat… and that crazy long tail but it has like t-rex arms for legs… I guess it has “chron” in the name so it’s about time so that’s something.

In Mardu knight land the land tax effect is not really that powerful; in fact, it’s a positive hindrance, slowing the deck down – though meaning that in midgame you can really explode if things come out right, and you’ll have thinned your deck considerably by that point, getting into place lands that tap for 2 or 3 and also constantly refilling your hand with plains and other basics. But sometimes you’ll start the game with a couple of these etb tapped and return a land cards so, like for real, this is a handicap.

Associated with knights I would say are armorers, and squire types. Getting their armor on them and making weapons and what not flows thematically and ties into our Commander’s mechanics, so I think it’s perfectly permissible to run a few non-knights that can act as armorers and smiths to help achieve some of that, such as Sram, Senior Edificer and Stoneforge Mystic. Feel free to cut them if you’re a purist. 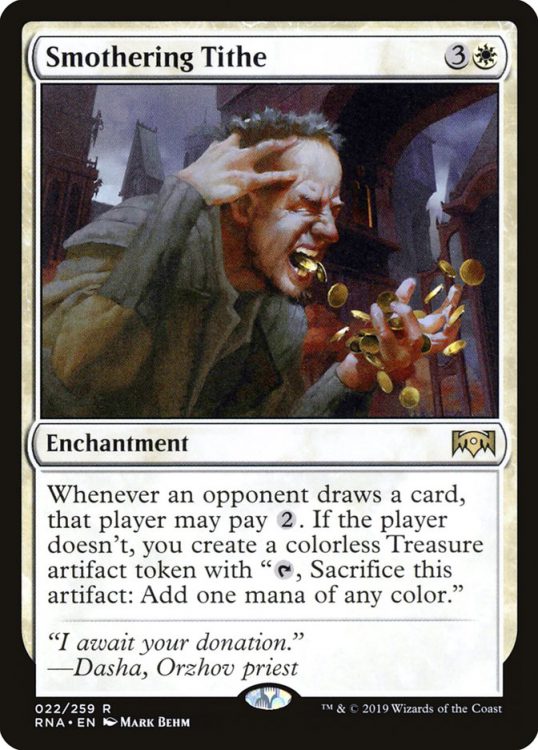 Also there’s Smothering Tithe and Monologue Tax, because in a truly fundamental way, knights were very serious about, and supported by, taxes on the peasantry, and these are decent white cards.

And you’ve got a bunch of equipment. In my opinion, most of the generically best equipment either draws you cards or helps you go seriously big fast. So bloodforged Battle-axe will just let you keep popping out more axes, (and every equipped creature that attacks draws you a card when you have Syr Gwyn). Sword of the Animist fetches you more lands and draws off Gwyn, Sword of Hearth and Home is same deal, more lands and lets you generate an ETB which can easily be Stoneforge Mystic or something else with a nice etb. Sword of fire and Ice is draw and control, sword of feast and famine untaps your lands. Umezawa’s Jitte is an amazing control card or finisher on Gwyn, Empyrial Plate makes all those lands you’ve taxed into your hand into creatures, Stoneforge Masterwork is just another Coat of Arms and Coat of Arms is Coat of Arms and Vanquishers Banner is card draw.

Your instants are the basic suite of mardu removal and some tutors, and your enchantments are likewise just taxes to levy on your opponents and Knight’s Charge to recover from a board wipe.

As for knights, there’s a focus on smaller ones to put equipment on with interesting abilities.  There’s a sub-theme of knights that summons soldiers when they do things, but I thought that was kind of impure.  But running a ton of those token generators and giving them equipment might be an even stronger way to play this, just bringing out Gwyn as a finisher.

Which brings us to Gwyn. Syr Gwyn, Hero of Ashevale does not have the best commander design, in my opinion. A 5/5 with equipment, menace, and vigilance is fairly scary. People are instinctively going to want to blow up Gwyn, especially if you start throwing on equipment; +6 power and double strike isn’t hard to get onto a commander that has red and black available. So there’s a lot of equipment in the deck that can give Syr Gwyn hexproof or shroud to keep Gwyn on the table, but the deck is still fairly vulnerable to board clears. So there’s Boros Charm, Flawless Maneuver, and Guardian of Faith to offer up a little protection for your permanents.

You could also increase the efficacy of this deck by running mana rocks.  Probably Arcane Signet and Fellwar stone and the other signets, but I didn’t because I’m intentionally trying to handicap the deck.  So I can play it at the LGS.

What to tutor for:

Not necessarily in that order every time, but that is probably your order of tutoring priority.  However you have to be careful, all your tutors will grab Animist, not all will grab Achaeomancer’s Map, which is frankly a really really strong long-term value card, especially if you have some of the bounce lands, since it will almost entirely offset the penalty by letting you put the lands back into play on opponents turn.  It’s burgeoning, but for white, and that’s good.

So there’s the classic edition of Gwyn (aka cheap)

And here is Ser Gwyn, Hero of Ashvale deluxe XLT edition (aka the version with the dual lands)

Next week, I’m feeling a bit Rouge-ish. As always if there is a commander, deck concept, tribe, or color combination you’d like to see comment below or shoot us an email at contact@goonhammer.com.