Commander Focus: Take it to the Limit (Aegar, the Freezing Flame)

Aegar, the Freezing Flame comes out of Kaldheim as part of a strange and somewhat new tribe combination: Giant Wizards.  If you thought this wasn’t threatening enough:

Imagine if he was also twenty feet tall. And look, I know what you’re saying – Tim there is an “enchanter” and not a “wizard.”  Nonethless, he’d be terrifying if he were twenty feet tall and crashing down your street tossing fireballs and uh, iceballs everywhere.

“Excess damage” has existed as a mechanic for as long as the game has been around – it was introduced in Alpha through the Trample keyword and was originally just for combat damage. The concept has since shown up a few times on spells, where excess damage can dealt to the controller, much like spell trample. Head designer Mark Rosewater has also noted in his articles that he’s attempted to put Trample on spells on multiple occasions, but the game’s rules and templating seem to prevent this). Eventually he made it work in an Un-set on Super-Duper Death Ray, but it’s unlikely we’ll see it templated with the Trample keyword any time soon. That said, it’s interesting to see a card that keys off excess damage without dealing it directly.

From a Commander game balance perspective, benefiting off dealing excess damage to creatures might go a long way toward bringing red up in value for decks; currently it’s one of the least-played colors, according to most metrics, and it’s not terribly difficult to see why. One of Red’s defining abilities is the damage-based board clear. Unfortunately many decks may run a few utility creatures with low toughness and then may have commanders or beaters with much higher toughness values that make them harder to clear with damage. And compared to cards like [[Wrath of God]] and [[Damnation]] Red’s options are relatively expensive and may fail to kill the entire board.

But having the ability to benefit from excess damage dealt to those utility creatures may provide big value – both Aegar, the Freezing Flame and Toralf, God of Fury both offer ways to tangibly benefit from dealing excessive damage to the omnipresent Llanowar Elves and Dark Confidants in the Commander format. This deck looks to leverage those board clears and drop big giants onto the board, generating repeated etb effects. Using Sneak Attack and Purphoros, God of the Forge you can put big expensive giants into play, attack with them, and then use cards like [[Displace]] to flicker the creature back onto the board. The new, post-flicker creature won’t remember it’s supposed to be sacrificed at the end of the turn and so sticks around.

On top of that we can build around giant wizard tribal. So this deck is perfectly valid to play in a much more friendly, lower powered, less competitive environments. There are a couple of gods in the deck, but I think it’s perfectly valid to say those are the gods that these wizard giants worship, and they have the added benefit of being indestructible if you are devoted enough to make them creatures, meaning you can rain fire down on them repeatedly and they’ll stick around. 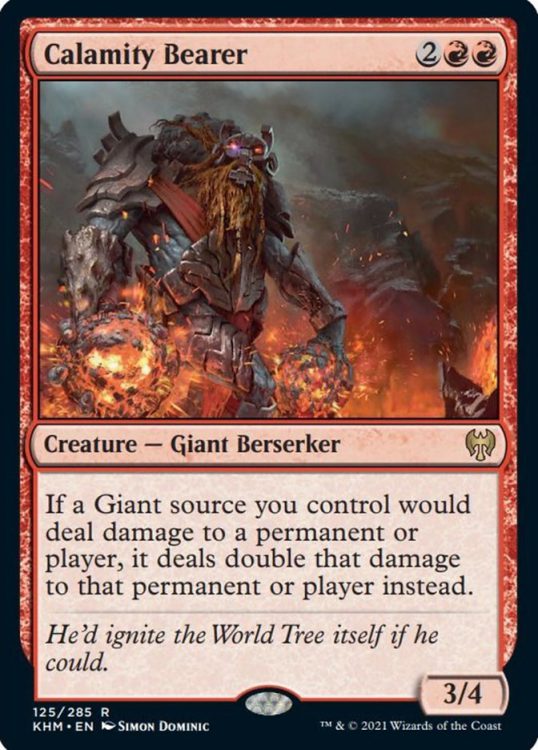 Although this is an Izzet (red/blue) deck, it’s not running a lot of countermagic or even blue cards in general (something else that can help if you plan to bring this to a more casual environment); it could certainly be remade into a Toralf deck if you were so inclined. As a pure burn red deck it might actually be more viable, having access to Blood Moon and Magus of the Moon with no need to run any non-basic lands. Though it would lose most of the flicker effects, which are key to the “cheating things out” strategy. There are a number of cards in the deck that are there solely to make sure that opponents actually have creatures to to destroy, Forbidden Orchard, Dowsing Dagger, and Genesis Chamber. This can be a bit of a dangerous strategy, and even feel like you are veering into group hug territory, but the creatures it gives are so small that it’s probably not worth worrying about.

If you want to make it less tribal and more creature-granting there is the “hunted” cycle of creatures to look at. In addition, Green has a number of creatures that give your opponent small creatures in return for them being undercosted, so this deck archetype could certainly be remade in either Temur or Gruul. I would think Neyith of the Dire Hunt would be a particularly adept commander at this sort of thing, giving giants double power and “must be blocked” would be fairly painful. It’s also worth remembering that damage in excess of lethal damage is assigned by the controller (702.19B) meaning if you have a 6/4 trampler being blocked by a 2/2, the controller of the 6/4 could assign 3 damage to the 2/2 so that “excess” damage is dealt to it and not wasted purely on the creature’s controller.

In any case, this is a relatively straightforward deck to pilot; dump out cards and then wheel so you can dump out more cards, then try to get everyone some creatures and then hope for a big finisher with Toralf in play, allowing you to deal a huge amount of excess damage to the other players.