Commander Focus: The Rubaiyat of oh my Tayam!

Tayam, Luminous Enigma is kind of a strange card. He cares about counters, not particular counters. A lot of cards will have you remove counters, but typically they are counters associated with the creature itself, and the most common scenario is a creature that either enters the battlefield with some kind of counters and removes or gives them away, or else that generates some kind of counters and either places them or removes them. 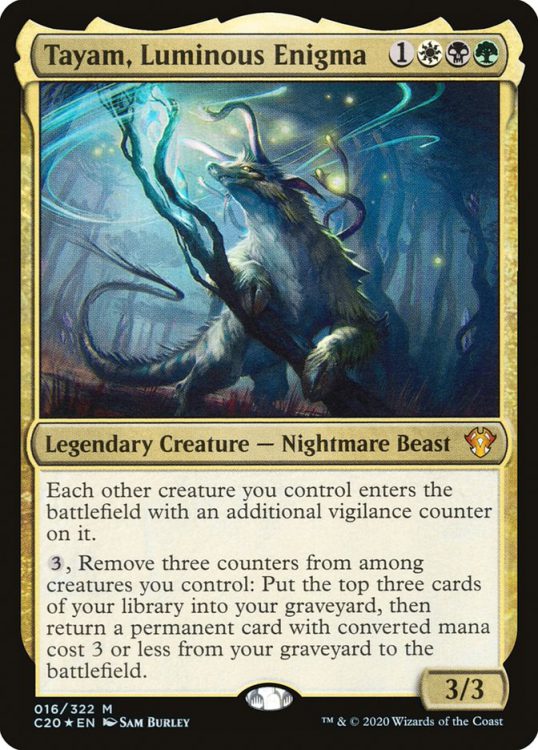 Ikoria though was the set with the idea of keyword counters, so you had creatures giving trample counters or deathtouch counters.  Tayam itself can be used to generate a sort of infinite combo, though it relies on a lot of token generation and then something that generates a fair bit of mana. It’s the sort of deck that kind of durdles about then suddenly explodes, but can’t handle much in the way of disruption and doesn’t do much interaction.  It’s a kind of playstyle I don’t really enjoy, especially because it’ll often struggle to close out games in addition to everything else.

But the Saga of Urza’s Saga, which didn’t come out during Urza’s Saga and is actually a land enchantment, an entirely new thing, can fetch some interesting artifacts, among them Hex Parasite. Hex parasite and Tayam, Luminous Enigma also have the same sort of weird ability, they care about counters, but don’t care about what kind of counters.

And Sagas are the real trick of the deck, as well as the fun of the deck. Normally sagas come into play, do a couple of things, and go away. The only one seeing widespread play that I know of in Commander is Urza’s Saga because, worst-case scenario you’re fetching Sol Ring, but most likely you’re fetching Sensei’s Diving Top or Lion’s Eye Diamond, a mox or Jeweled Lotus, or Candelabra of Tawnos or Skullclamp. There’s a lot of neat things to fetch with it’s ability.

Sagas actually trigger in a really weird way, that we don’t really think about very often.  When a saga enters play, you put a lore counter onto it, and then it does the thing.  Okay neat no big deal.  But then when sagas hit their max number of chapters, i.e. lore counters, they go away.  But they do it in kind of a strange way:

715.4. If the number of lore counters on a Saga permanent is greater than or equal to its final chapter number, and it isn’t the source of a chapter ability that has triggered but not yet left the stack, that Saga’s controller sacrifices it. This state-based action doesn’t use the stack.

What this means, functionally, is that we can react to the chapter ability going onto the stack, and remove the lore counter.  What will happen then?  Nothing, the saga will sit around, and next turn it will put another lore counter on the saga, it will go on the stack.  And we can remove the counter in response then.  This means, functionally, if we have the ability to keep removing counters we can keep having our saga’s trigger whichever chapter ability they want, over and over and over.

Okay but hex parasite is only 1 card, and it’s not particularly tough or hard to kill. If we build a whole deck around this combo then, you know, someone will cast swords to plowshares on the hex parasite and we’ll have a deck that doesn’t do much.

This is where Tayam, Luminous Enigma comes in. If we turned the sagas into creatures, suddenly we could use Tayam’s ability to remove counters from them to keep triggering them, and also beat our opponents to death with them. Imagine being attacked by Elspeth’s Nightmare. Cool. Thankfully white has some cards that turn enchantments into creatures: Opalescence and Starfield of Nyx. Tayam’s ability also works really well with Replenish. If we’re using Tayam to cycle through our deck and return selected permanents, we’re dumping enchantments into our graveyard. Then boom, we can replenish them all back into play at once.

The deck runs enchantress effects for card draw, and land enchantments for ramp, and that should generate a lot of mana quickly.  Always try to put your enchantments on basic lands so you can really leverage earthcraft.   Unmarked Grave and Entomb let us put enchantments to replenish into our graveyard, and there’s a fair bit of recursion via enchantments and sagas, and if things get sticky we can use triggers off the Meathook Massacre and Bastion of Remembrance along sac outlets to just drain people out.

The deck is put together with full ABUR duals, and that drives almost all the cost of the deck.  If you don’t use proxies, obviously, don’t use them, which drops the deck down to a fairly reasonable price.  Unfortunately, the mana base is very tight, and it’s important to have multicolor lands quickly via fetching. Other than that, cost-wise, the big standout then is replenish itself, and earthcraft, and a few other big cards.

This is, frankly, not super competitive as a deck, but I think it’s a really neat mechanic and way of playing with Tayam, who I’ve struggled to make something of multiple times. The interaction between Tayam and Luminous Broodmoth and a sac outlet, especially an altar, means you can theoretically mill through you deck, and you can use that as a way to kill, mostly with something like Priest of Gix or something with an etb or else Syr Konrad, the grim to do damage, but it ‘s a lot of moving pieces for a complex combo that is easy to disrupt and just not that good.  This on the other hand is kind of fun and goofy, and while it’s potentially powerful, the sagas rarely see play in commander, and they’ll show up nicely, and it’s neat to figure out a way to more or less abuse their theoretically temporary nature, while still being pretty interactive with the board.  In a sense it’s too bad blue isn’t in the mix, because the inclusion of enchanted evening and a couple other cards, as well as Estrid, the Masked, would be really fun; however it would probably just turn into a different kind of Estrid deck, and this is something else, and hopefully somewhat unique.