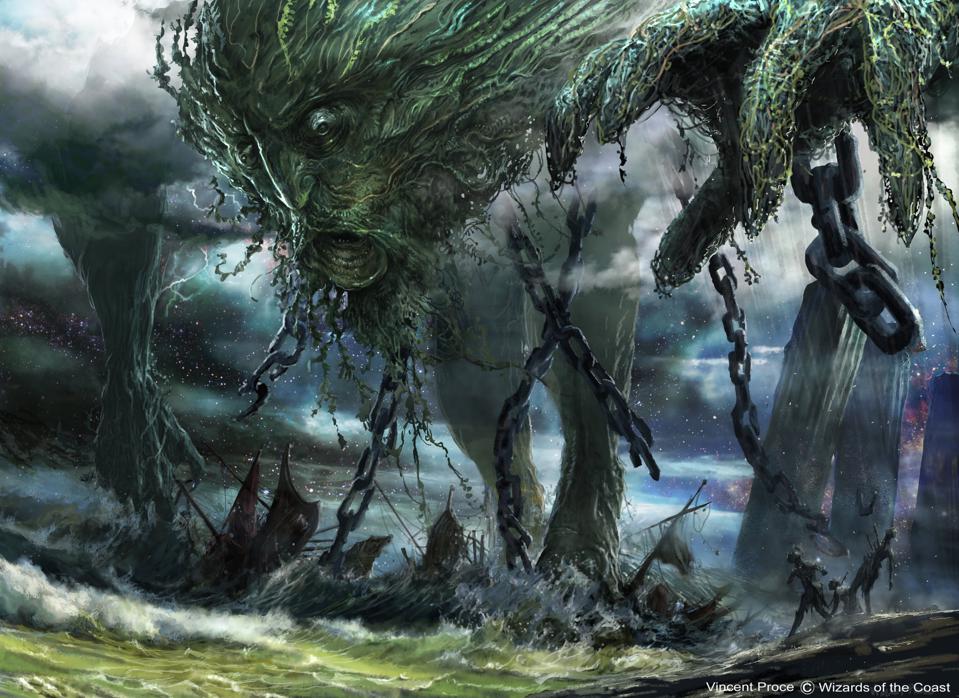 Uro, Titan of Nature’s Wrath, is probably the stand-out card of Theros: Beyond Death. It’s hard to say exactly but Simic has been at the center of a number of cards which required banning due to their overpowering the meta.  It’s hard to say if Wizards current strategy of pumping out overpowered cards and then aggressively banning is sustainable.  August 8th saw the banning of Wilderness Reclamation and Growth Spiral.  This pushed out a big deck and moved the meta towards the Temur adventures deck, which shockingly included Simic colors and, in my opinion the better version of it ran Uro to counter mill decks and aggros, and then they banned Lucky Clover.  Uro kept escaping (get it?) these bans but finally felt the wrath in standard.  But this last week Wizards announced that Uro would be banned in practically every format except commander. 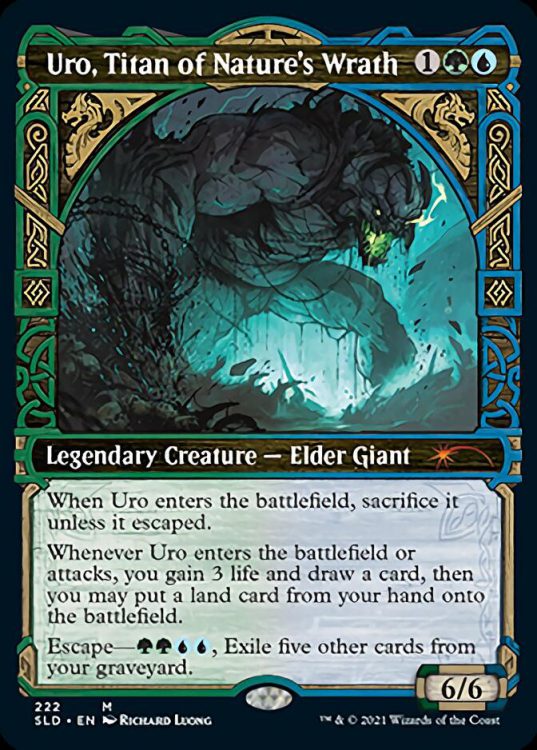 Although the banning wasn’t necessarily a surprise, the way we learned about it was – in their announcement for an upcoming secret lair drop series where several titans got a runic Kaldheim version, Wizards clarified that Uro was finally going to be banned, something they did the following Monday. Apparently they’re not willing to let people buy the secret lair version and then immediately ban the card, which is fair enough. Drawing and ramp and life gain are all powerful things in 1v1 play, but they tend to be less powerful in Commander. Life gain is mostly negligible; starting with 40 life means that players routinely treat their own life as a useful resource but don’t that commonly die to things like combat damage, at least at lower power levels. Card draw is typically good, but Commander offers amazing card draw engines like Rhystic Study and Wheel of Fortune, making Uro’s draw a bit less important. Ramping is good, and can be quite a useful strategy, but Commander is home to so many stand-out cards with extremely low converted mana costs that it’s not something you necessarily need. The reality of playing a 4-player environment is that it’s not enough to just get some resource advantage and then leverage it to play more powerful cards, netting you increasing card advantage until the game ends. Most games end in powerful repeatable combinations; needing to deal over 100 damage easily means going wide with creatures is a difficult prospect even at the best of times. There are ways to kill with creature combat damage, but many of them revolve around repeated combat steps or infinite combat steps, such as Najeela, Blade-Blossom or Godo, Bandit Warlord. Gaining a mere 3 life isn’t enough to move the needle and gaining a single land drop often won’t do much for you.

Nonetheless I think Uro, Titan of Nature’s Wrath is still well-suited its new life as a Commander option. Simic offers some fun alternative win conditions, powerful ramp, and counterspells. Yeah you don’t really need to ramp, but Simic’s ability really ramp out like crazy has a lot of use.

The basic game plan of the deck isn’t so much around Uro as it is getting lands into play. Uro just serves as a useful source of early ramp and ought to let you get enough resources quickly to get out either Tatyova, Benthic Druid or Aesi, Tyrant of Gyre Strait. You might argue it’s better to make one of these the commander, and you certainly could, but I think it’s fun to roll Uro. The deck runs a number of tutors, and Uro himself is not particularly hard to get back out of your graveyard with the all the 2-cost land ramps. Once Uro’s in play in play he should net you rapid lands drops and card draw.

Once you have Aesi or Tatyova in play you next want to get a way to play a fetchland from your graveyard, either Ramanup Excavator, Ancient Greenwarden, or Crucible of Worlds. Once you have one of these you can sift through your deck very rapidly, playing a search land from your grave nets you a card and searching for a land nets you another card.

If you need to take a detour here you can just kneecap everyone else’s mana base, you can do so very rapidly by playing Strip Mine and Wasteland with extra land drops. Given how lean most Commander decks are with regard to mana bases this can be a devastating strategy, but most players will be highly resentful of it, so be prepared for the righteous fury you’ll be engendering at your table. Combined with Collector Ouphe, Karn; the Great Creator; and Null Rod the only source of mana your opponents will be allowed is mana dorks. If you decide you don’t want that kind of power over life and death (and we certainly don’t blame you), then feel free to cut either or both; there are also additional “sacrifice: destroy target land” cards you can look at like Ghost Quarter instead. A potential advantage of Ghost Quarter is you could potentially use it to get your own Burgeoning triggers, but the odds of having both  are small enough that it’s not dependable enough to bank on as a strategy. However a staxier version of this deck might run Mana Breach and Overburden since the deck runs so many play additional land cards that you can easily overcome that penalty.

If your meta runs heavy on board clearing effects you might consider swapping out the mana dork elves for fetch elves such as Wood Elves Yavimaya Dryad, District Guide, Farhaven Elf, and Solemn Simulacrum. Though these are vulnerable to effects that remove or prevent etb effects, they can also be combined with chain sacrificers such as Birthing Pod to fetch up into your engines.

Once you’ve started generating a lot of mana you want an untapper and then one of your win conditions. If you want to make this deck better, or “classically good,” then the win condition could be changed to Thassa’s Oracle, Jace, Wielder of Mysteries and Laboratory Mechanic, but I have a fondness in my heart for alternative win conditions. There are two alt win conditions in particular that are easily available to big mana Simic: Simic Ascendancy and Helix Pinnacle. Simic Ascendancy gives some added value in that it lets you put +1/+1 counters onto your creatures, and several of the mana dorks tap for mana equal to their power. Untapping over and over via Seedborn Muse or Quest for Renewal should let you generate huge amounts of mana. You can combine this with the big extra turn spells to take repeated turns, and Thryx, the Sudden Storm or Teferi, Mage of Zhalfir will protect your extra turns.

The deck offers a decent spread of instant speed interaction, counterspells coming out of blue, and some creature control with a bit of stax.

I’ve included a huge number of cards in the sideboard that could take the decks in different directions, you could focus on untapping more, on playing bigger creatures, on taking even more turns.