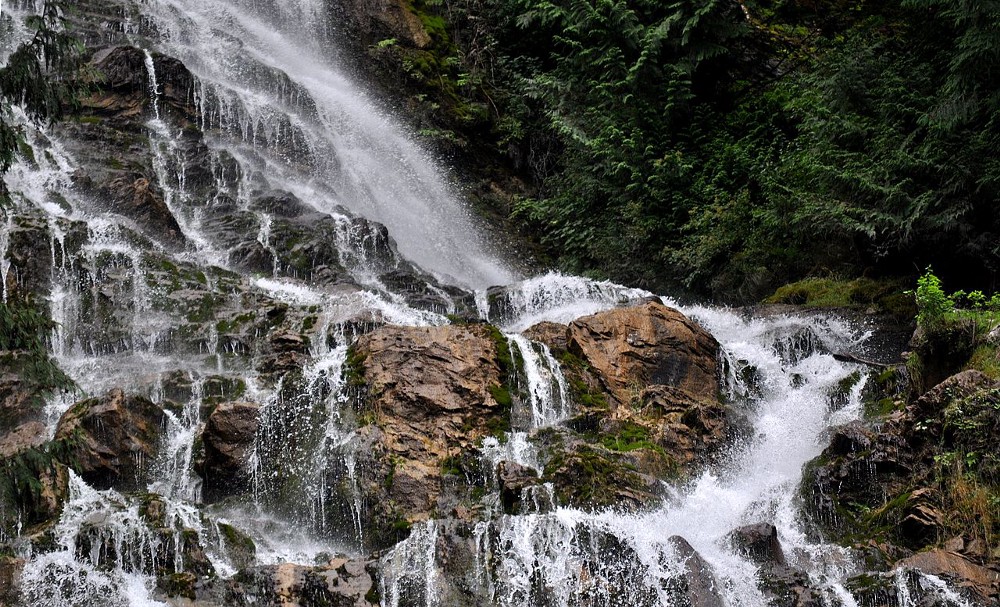 In Commander Focus, we look at building around different Legendary creatures each week for the Commander format. This week we’re looking at Yidris, Maelstrom Wielder.

Yidris, Maelstrom Wielder comes out of a cycle of commanders from 2016, each possessed of 4 colors, each costing one colored mana of each of their colors. I’ve previously written about Atraxa and I’ll cover Breya Etherium, Etherium Shaper and Kynaios and Tiro of Meletis in due time, though I don’t see the point of Saskia the Unyielding; the etb effect is unpleasant and unfun and simply doesn’t do much in a four-player game, the best solution would be some kind of curiosity draw combo, except of course Saskia is sans blue. 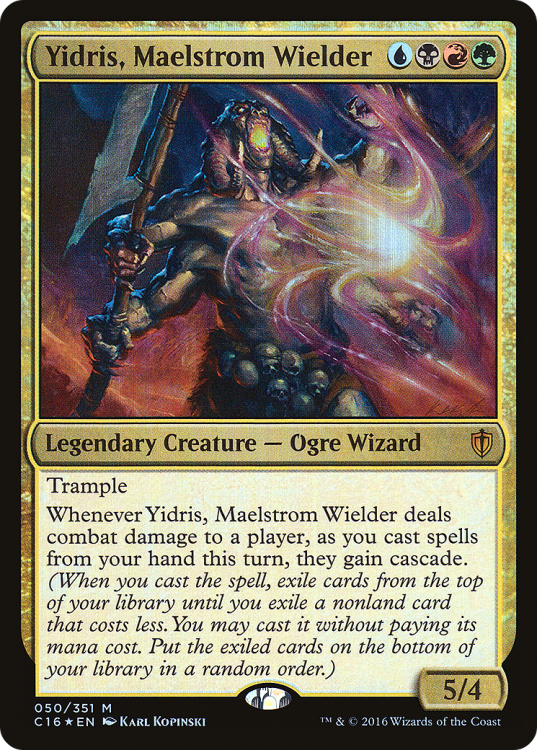 Yidris might be thought of as Temur + Black, because most strong cascade abilities lie within Temur, and he’s certainly all about cascading.  The weakness of a commander like this is that other players can often detect that your entire deck hinges on whatever ability the commander grants.  This is both a strength and a weakness of commander, because you always have access to a certain mechanic or combo piece, but at the same time the other players can see what mechanic or combo piece you have access to, and frequently deduce what your deck does and how necessary it is.  I have a friend who plays a Neheb, the Eternal combo deck, and one of the easiest solutions is to just blow up Neheb.  It basically stops the deck in it’s tracks.  The recent addition of the cycle of cast for free without a commander spells out of Commander 2020, such as Fierce Guardianship and Deflecting Swat are a good addition to the meta in my opinion because they allow you to protect your commander to a certain degree once it’s in play, though the black one – Deadly Rollick is a creature removal spell, and the green and white spells are particularly lame – white’s Flawless Manuever really seems like it ought to give your commander hexproof until the end of the turn (then it would protect from deadly rollick) and green’s Obscuring Haze is even more underpowered.

Putting a commander like Yidris, Maelstrom Wielder into play can be a dangerous step – he’s obviously going to pump out cascade if he swings at someone, and you’re often unprotected due to a desire to commence your game plan.

This, in part, helps reveal the power of commanders such as Thrasios, Triton Hero and Tymna, the Weaver, rather than being combo pieces they are simply value commanders, and thus blowing  them up only prevents one opponent from generating value (though Thrasios is often used to draw an entire deck) but with a win con as elegant as “exile your library” coming out of black, and “win when you draw with no deck” coming out of blue at extremely low mana costs, it really enables you to play the T&T combo that makes them far and away the most common cEDH commanders.

Yidris himself generates a powerful value engine out of your spells: he gives them cascade

Cascade works in a seemingly paradoxical way – if you cast a spell with cascade (or one that has gained it, from say Yidris) then it automatically creates a trigger, you reveal cards from the top of your library until you reveal a nonland card with a lower converted mana cost, and you may cast that spell for free, shuffle the other revealed cards and place them on the bottom of your library.

Once Yidris hits an opponent all our spells will have cascade until the end of the turn, even if he leaves play (even if we recast him). But it’s important to understand all the wrinkles of cascade, converted mana cost, and alternative costs.

So if cast a spell, such as Force of Will by exiling a blue card and paying 1 life, you have just cast a 5 cmc cost spell, and assuming Yidris did some combat damage to a player this turn, you’ll create the trigger for a 4 or less cmc spell, which will resolve before the force of will.  Casting a spell such as this can lead to casting several spells in a turn.

There’s also a card which used to be a fairly common win condition in commander before the Thassa/Consult combo gained such pre-eminence, and was itself a kind of pseudo-storm card:

Both storm spells themselves and Aetherflux do more for each spell you’ve cast this turn.  The final possible combo piece we are relying on is sometimes referred to as dramatic scepter, it’s a combination of Isochron Scepter and Dramatic Reversal.  Isochron scepter as a relatively rare wording:

Generally copied spells aren’t “cast” they are “put onto the stack” without being casted.  But Isochron Scepter casts the copy.  If you have artifacts in play (or artifacts and creatures) which tap for a total of 3 mana, you’ve just created the ability to generate infinite mana and cast infinite spells.

We’re also going to rely on these alternative casting costs to restart our triggers, because even if we pay with life to cast Snuff Out, it still has a CMC of four.  This lets the deck keep slamming through cards.  And fortunately all the 0 cost spells (with the exception of Pact of Negation) are free mana generators, which means we should always net 1 mana from any free spell.

The critical piece that gets you going though is a draw trigger.  [[Jhoira, Weatherlight Captain]], Vedalken Archmage, Riddlesmith, and Song of Creation all let us draw cards for casting spells.  The first 3 for artifacts, and song of creation for anything.  This means if we cast an artifact, such as a 0 cost artifact, we can draw and cast again, hopefully on an alternative cost, and keep the storm brewing.

Combine this with the cost reducers packed into the deck Etherium Sculptor Foundry Inspector and Jhoira’s Familiar we can frequently start dropping mana rocks and tapping them, if not for free, then at least netting mana and cards, to further cascade off the top.

That wraps up our attempt to use the new Cascade cards. Turns out they don’t work so well in this kind of combo storm deck, unfortunately. Next time we’ll talk about the upcoming Commander Legends set, look at the cards in it, and talk about how it changes Commander. Until then, if you have any questions or feedback, drop us a note in the comments below or email us at contact@goonhammer.com.