On April 21st, 1989 Joseph Jefferson “Shoeless Joe” Jackson famously asked local farmer Ray Kinsella if he was in heaven. “No.” Ray replied, “It’s Iowaaagh.” Ray built it, and in the end, the people did come, his pain was eased, and he enjoyed a long-overdue catch with his father. Now in 2021, Josh Thomas is recapturing that very magic and building a new field of dreams amidst the corn.

Having recently organized and executed the first-ever Grand Tournament in Iowa, The Iowaaagh! Open, Josh and the competitive community of Iowa have reached a new milestone in their development. Over two days in August, 40 players, some travelling as far as 750 miles away, met in Cedar Rapids, Iowa for five rounds of fun, dice, and the celebration of a vibrant and growing player base. We caught up with Josh to congratulate him on his recent success and to ask him about the journey. 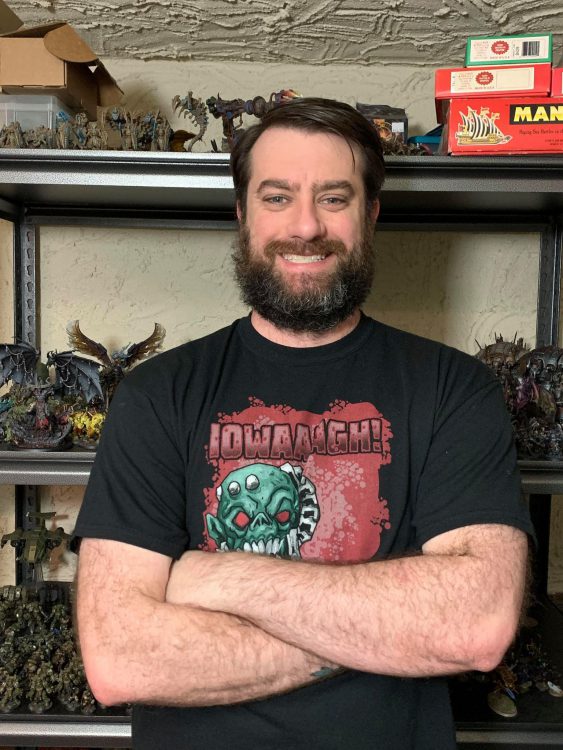 Tell us about yourself!

I played my first Miniatures game in 1989, Battletech, but I had some exposure to Fantasy and 40K, really got into GW around 1991. I play so many games it’s a wonder I know the rules to any one game. Currently I play 40K, bolt action, Star Wars legion, Wild West exodus, Hail Caesar, and Star Wars armada on a rotating schedule. Though I play 40K 2-3 times a week running learning games, practice for competitive guy or leagues. My main army is Orks but I own 10-12 other armies not counting all the armies for all the games I own. I am married with no children – that’s why I have time to do all this I think.

Author’s Note: Word on the street is that his favorite type of shot is any liqueur, the syrupier the better.

Building a competitive community from the ground up seems like significant time commitment and a lot of work – what inspired you to take on such a mission?

Ultimately, I started work on the community here in Iowa for one selfish reason, I wanted to play 40k. When I moved up here for work about 10 years ago, the community was extremely scattered, and it was just hard to get a tournament game in. I met a couple guys who were as deep into 40k as I was, and we started travelling around, mainly Chicago and Des Moines, for RTTs, but that was 2-4 hours, and we’d go somewhere with no expectations on terrain, mission sets, numbers of players, and so we had some really varied experiences. I think it was, maybe 2017, I finally hit the breaking point. We drove 3.5 hours, got to an event to find out it was using an ancient version of the ITC missions, the terrain was basically non-existent, and first round I played the guy I drove up with, and I said, that’s it, we can do better. It was on that drive home, we came up with what was really a 2 part mission statement. 1) Build a better community, get guys out of their basements and into events. 2) Build better events. Make events people want to come to. Treat every RTT like it’s a GT. Those were the basic tenets of why we started what ultimately became the Rolling Sixes club, and the Iowaaagh!, but obviously along the way we were influenced by so many other things, like the regional conference, the Lord Marshals Conference, or the ITC and the growing national scene. But at its core, we just wanted to play more 40k.

I must imagine that there were considerable challenges in doing so – what were some of the hurdles you faced and in overcoming them, what did you learn?

There were a number of things we had to deal with early on, and they were things like communication, not just to individuals but between groups of people. Then there is the ever-present logistical challenges of playing 40k, first owning, then transporting; terrain, tables, clocks, etc. Then there was the venue problem, where do you hold events if the stores in your area are small or just don’t exist? And over all that, was getting guys interested in competitive 40k. The spectrum of players in 40k, stretch from narrative casual player to hard as nails competitive player. In Iowa, we had a much higher spread of casual folks, where things like tournament, competitive or ITC were dirty words. So we had to not just build the infrastructure logistically for supporting events, but had to build the confidence of the community that there was more to events than just winning, but that the entire event experience was really the pinnacle of the hobby, a celebration of community, 40k, and miniatures. We had to tackle each of these in turn.

We started by really tracking folks down, finding all the hidden groups all over the state. Social media was a huge boon here, and it makes me wonder how we ever managed events in the 90s. We built our own events pages, and places where folks could find our info and then we got into all the closed groups all over the state. When we started digging, we found a 40k group for every cardinal direction. SE Iowa 40k, West Iowa 40K, East Iowa, Iowa Wargamers, the list goes on and on. We joined all these groups and even now, when we make an event posting for FB, I copy and paste into 100 groups it feels like, but that started to break those communication barriers down. Then we had to figure out the logistical problem, the first couple events we ran, we begged, borrowed and stole all the terrain we could from anywhere. Quality was varied, some was painted some wasn’t, it made events happen, but felt like we weren’t meeting our goal of great events. So the core group of guys who set out on this journey and myself, decided to just start collecting terrain. In the end, this was just a matter of dumping money and time into terrain, and finding guys like Ben Spears of Snarky Sayings etsy store fame, who has been such a huge supporter of events all over the Midwest, his terrain now makes up almost 30% of our stockpile. This was maybe the biggest resource hurdle, we’ve thrown thousands of dollars at the issue, and will keep throwing money at it as we continue to grow events, but it’s a foundation of running events we feel like people want to play in.

The next big hurdle was where to host events. So we started travelling, we went to every store in the state we could to hang out and play, to meet folks, meet the store owners and in our quest to find cheap space, we did things like rent empty shops in half dead malls. But we now have great relationships with stores and venues all over the state, and even pre-stage terrain at some of them. In the end, as we conquered each hurdle we were laying the foundation to build better events. I think it also gave us a healthy respect for other events we attend.

Iowa is both a more rural and less populous state than its neighbors to the north and east, can you discuss any difficulties as a result?

The main thing the demographics of Iowa do, is force us to bring events to different cities, and be flexible in supporting other TOs. We found early on, there were lines folks just don’t seem to cross until they have had some exposure to our events, and that seemed to be about 2 hours. So we decided to host events in 5 different cities, so there was always an RTT near folks. As we have built a reputation for running decent events, we’ve seen more and more guys travel outside their comfort zone, and more and more of our events have become centralized in Cedar Rapids, where we just hosted our, I guess for lack of a better word, premiere event, the Iowaaagh! Open. The rural nature of the state means, we focus on not just running events, but enabling them too. We provide terrain for any event we can spare it for, and when TOs come to us about events, whether 40k or some other game, we do our best to spread the word and help promote each other. At the end of the day, we have less players, and we have to work twice as hard to make sure we build the community we want.

Who else do you want to recognize in building this community?

There are so many people who work to make all our events happen, I can’t even begin to thank enough guys. Guys like Leighton Hitesman or Matt Runde, who were the charter members of the Rolling Sixes club have invested more money than I can count into terrain, clocks, or anything else we need. Britton Rexroat is the most passionate member of the community, and his contribution in time and terrain and just energy is always appreciated. Alec Gorishek and Jim McGrath have been one man trucking companies on more than one occasion, proving the point that if you buy a truck, you are forever bothered by your TO buddy to use it. Thomas, Jacob, Kyle, Milan, Moose and the entire Rolling Sixes crew donate time and energy to make these events happen and I am forever grateful.

What’s next for this community?

It has taken a few years, but now that we have our logistics and communication in place, our goal really is to solidify what we are doing, grow some existing events but maybe cut back on overall numbers, and increase quality over quantity. Our next big goal is to tie all our events in a given year to something we are calling, the Iowa Cup. I think we will even out the number of events we run, expand one to a Major, add one early year GT to the bunch and call it day. Eventually, we hope that all our RTTs are self-sustaining, and maybe one day I will get a chance to play in an event again. At the end of the day though, we aren’t doing this to make money or trying to take over the Midwest or anything, we run these events for the community. Our goal is to build the community we want to play games in, and in true Iowa fashion we will keep hoping that if we build it, they will come.

Ah yeah, way to bring it full circle with the Field of Dreams reference Josh. Thank you so much for your efforts in growing the competitive community and bringing new opportunities to the game. We look forward to the future of 40k in Iowa!