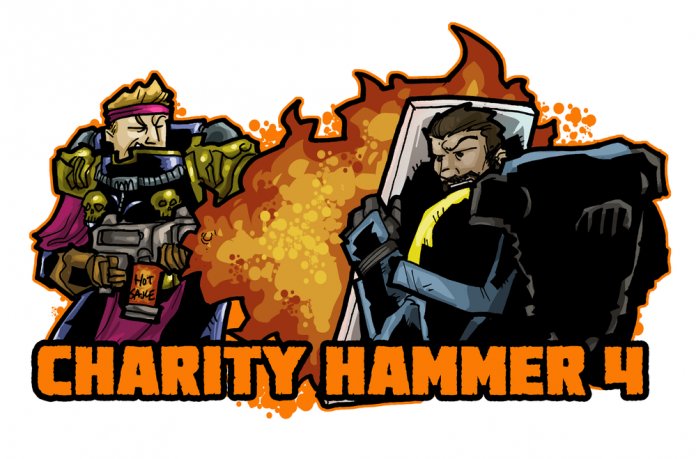 One of the more noble aspects of the Warhammer community is the dedication of events or tournaments to charitable causes. One such event, Charity Hammer, is coming up on its 4th year and we wanted to take a moment to highlight the outstanding contribution to community and the leadership exemplified by the team behind it. This year, Charity Hammer streams will start at 8AM PST on June 23rd and conclude at 4PM PST on the 26th from the home of Colin Sherman in Mount Vernon, Washington.

We caught up with Colin to tell us all about the event. For those who may be not familiar, Colin along with co-hosts Chuck Arnett and Mitch Pelham produce the Best in Faction Podcast (BIFPOD). He began his journey in the 40k universe as a member of the inner circle – picking up a band of Dark Angels to paint (which he assures us are hideous now). Today he’s better known for his Craftworld and Tyranid armies but he still retains his Dark Angels along with a regiment of Imperial Guard.

How did you get your start in Warhammer?

I was around 15 when I first found my love for 40k. In college, I was pulled away from my 40k friends and drifted from the hobby until 2016 when my kids wanted to try Age of Sigmar… Then the 8th edition came out and just like that my free time was gone.

What draws you to this hobby?

I’m someone who has a very difficult time calming my mind long enough to relax and enjoy any moment.  I’m also incredibly drawn to social interaction and meeting new people.  Obviously, this community means the world to me.  That said, what I really love about 40k is spending 3 hours with an awesome person playing a deeply strategic game.  During that game my brain completely calms.  I focus on specifically the game and I feel a calmness that I don’t get in the rest of my daily life.

Tell us about Charity Hammer, how did it get started? Who was involved?

Four years ago, I was playing a stream game with Nick Nanavati and we were talking about how there was a shortage of good, streaming competitive 40k content.  The conversation spawned the idea for an event that would create a lot of great stream content all at once.  That quickly evolved into what is now known as Charity Hammer.

That first year was a small crew which included John Lennon, Nick Nanavati, Alex Macdougall, Richard Siegler, Chuck Arnett, Mitch Pelham, and a fantastic group of locals who are still involved to this day.  All told, Charity Hammer has included over 60 different people over the years and this year we will have 40 players this year. Although competitive streaming content is much more common these days, Charity Hammer will continue to evolve and try new things to push the medium forward.  Stay tuned for this year where we are unveiling a lot of new ideas!

What’s a memorable moment from past years?

Last year we raised $40k from the community. The generosity was well beyond what I had prepared myself for and it was just amazing to see.  The feeling of community was so strong. In total we have raised over $100,000 with 100% of that money going to charity – the event is all volunteer run.

That’s exciting! Tell us more about the charity and the event this year!

This year we have a charitable goal of $50,000 for the Child’s Play Charity – an organization dedicated to improving the lives of children and teens in children’s hospitals around the world. Child’s Play currently has a network of over 180 children’s hospitals worldwide as well as nearly 200 domestic violence shelters across the United States. The event will feature four uninterrupted streams for over 80 hours (200 hours total) of ongoing 40k content that will see some of the best in the game on the tabletop!

This year we’ll have a 32-person single-elimination tournament, as well as a best-of-the-worst RTT that’ll see eight excellent players play eight awful lists crafted for them, and a Tyranids and Orks mini showdown to determine the best of each faction, and more!

Where can we tune in?

You can check out our website for more details on the event and schedule including a donation link where each $30 donated will enter you another ticket into a raffle. The main streams can be found at the Best in Tabletop YouTube channel. We hope to see you there!

Thanks Colin! We look forward to an excellent weekend of gaming for a good cause!

If you’re looking for some great 40k content this weekend be sure to check out the happenings up in Mount Vernon – it’ll be certain to entertain!