Basically, only one tournament had lists available and was ran this past weekend with 28 or more players (our cut off point for coverage). As a result, let’s take a bit of a closer look at the event in question.

Broken Realms and Minis for War

A two-day, five-round event which took place at Broken Realms, in Glasgow, Scotland. It was a 30 player event and you can find the lists for this event at Tabletop.To.

Maggotkin of Nurgle VS Cities of Sigmar – Feral Foray

Maggotkin – Andy Currie – A Glottkin Drowned Men List that takes fewer Pusgoyles than you might expect to free up space for 2 Mindstealer Sphiranxes and some Blightkings for more center board beef.

Cities – Stu West – This Living Cities list leans on Freeguild primarily, with a mix of Guard, Handgunners and Pistoliers, supplemented by a Hurricanum. Oh and a Stormcast Stardrake and 4 Fulminators.

Both lists are a little bit different than what you would expect – The Nurgle list is lighter on bodies as it invests a hefty portion of its points into the Glottkin and the Living City army is bringing dragons – but not the dragons you might expect, boasting a mighty Stardrake.

I won’t sugarcoat it – this one seems rough for Stu, as he has some amount of shooting but against Nurgle in particular, incidental shooting is largely ineffectual thanks to their 5+ ward save. He’s bringing two very hard hitting hammers here, and they will have to do a lot of the heavy lifting (and they will!). If Stu wins this, it’ll have to be through surgical strikes and avoiding prolonged combat, minimizing the amount of forces he’s engaging with and trying not to start racking up disease counters on the Stormcast units in particular. The battleplan helps somewhat with this, as he can play keep away with the Pistoliers and try to score points by raiding enemy objectives. Unfortunately for him though, their 9″ reach means they have to get into ‘reasonably achievable charge’ distance, and the Glottkin’s ability to let a unit charge at the end of your opponent’s movement phase means you could tie them up with a charge before they even get the opportunity to shoot and move thanks to the Living City’s Strike then Melt Away command ability. Oof.

As for Andy, he has a number of tools to help in this matchup, with Cloying Quagmire and The Leechlord’s Curse being two particularly potent spells that will help when dealing with the elite hammers that Stu has at his disposal. If he can permanently reduce the save of the Fulminators or Stormdrake, or simply limit their mobility, he can dictate engagements by counter charging on Stu’s turn thanks to the immensely powerful Command Ability that the Glottkin offers. If he can tie them down with something disposable long enough for the cavalry to arrive, he’ll have a commanding advantage in the attrition battle as the Sphiranxes help him tag a unit with fights last allowing a gang up. What Andy has to watch out for however is getting spread thin and losing on objectives, as he doesn’t have that much stuff overall, and Feral Foray doesn’t facilitate centre board throw downs the army excels at.

It’s a huge stress inducer for your opponent basically. The Pusgoyles and the LoA move up the board pre-game and immediately sit on objectives to establish an early objective foothold, and your opponent is forced to commit, opening themselves up to devastating counter charges thanks to Blightkrieg, the signature move of the new and improved Glottkin. The threat of such a move means your opponent will have to take it into consideration when moving there forces, lest they get charged and pinned in on their own turn, which is really bad news if said pinned unit is squishy enough to fall in a single turn of combat, freeing up the charging unit and effectively letting them slingshot up the board.

Nurgle is a really well internally balanced book, and the fact we’re seeing such varied lists is a testament to that fact – there’s no Maggoth lords here, nor are there any beasts of Nurgle. Instead, we see the humble Blightkings, who really benefit from the added mobility Blightkrieg gives them. Finally, Festus makes an appearance as a budget Loci of Fecundity, whose warscroll also lets the army make a dent in high base save units they might otherwise struggle with. 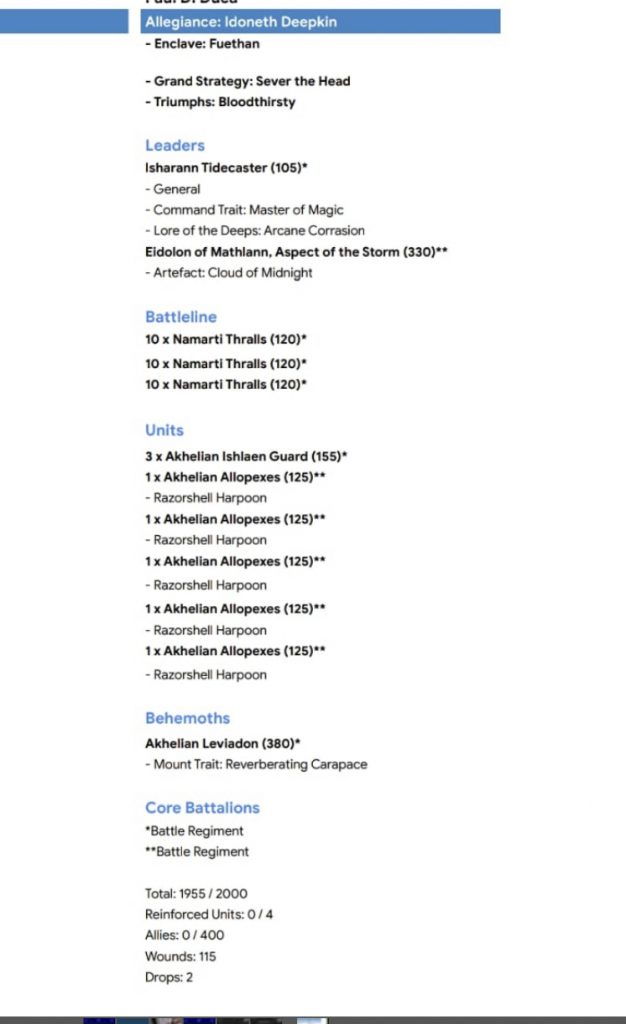 Presumably this is because the Idoneth FAQ hasn’t been released yet and the TO didn’t want to make any rulings on behalf of GW. As for the list, it’s about what you would expect from pre-battletome Idoneth: A bunch of sharks that benefit massively from the improved warscroll they received in Broken Realms, paired with an Eidolon to make them immune to shooting for one turn with Cloud of Midnight. It can hit hard and surgically but doesn’t want to get bogged down in lengthy engagements.

Thanks for sending such an old book off in style, Paul!

That’s it! A light week with not too much to take away, other than Nurgle’s impressive versatility being proven once again. Release the FAQs GW! And while you’re at it, release the Nighthaunt already, Ellarr needs his spooky fix. Laters!