After a bit of a lull last week with only two events, we’re back with another weekend jam-packed with big events, just in time to get a final view of the meta before Fyreslayers and Idoneth Deepkin join, with the later likely to have a bigger impact. This is also a week where we can really see the impact of the Beasts of Chaos Tome Celestial rules, and whether that faction is a real top contender or merely “pretty good” following their updates. In addition, the GW Matched Play Event will give us an early indication of the latest Battlescroll update and what it might have meant for the metagame.

A two-day, five-round event held at Warhammer World in Nottingham, England. You can find lists for this event in Best Coast Pairings.

It isn’t particularly? We’ve covered this list before, it combines the ranged strength of Longstrikes with the incredible everything of Stormdrakes, but what’s notable here is that the event used the updated Battlescroll we discussed last week. One of the concerns that many in the community felt is that this did little to swing heavily skewed matchups, as many armies can struggle to even kill many of the units affected by the change.

Put simply, the potential of extra victory points is nice, but unless it’s realised on the battlefield it’s not actually helping. Martin has an incredibly strong alpha strike here, and while I believe that this will make a difference in very close matchups, you also wonder if it’s enough to slow down such a powerful list.

Sentinels have taken a beating recently, what with the price hike over the holidays and now becoming a priority target. Laurie has decided to take an entirely different approach to the many changes affecting LRL by simply leaning into an oft overlooked strength – the effectiveness of Wardens. Yes it’s 14.5 points per wound, but that’s often the case for elite elven bodies, and they can fight respectably against many of the games top armies in close combat simply because they’re annoyingly difficult to remove when supported: -1 to hit, can stack up to 3+ save without even using a CP, 5++ ward from Teclis being examples off the top of my head.

Add on the lifeswarm to keep them topped up and you can see what the plan is here – simply exist on objectives and use teleports/double moves to present favorable combat situations. Did you know Teclis has access to 18 spell lore spells? Yeah you probably did, but have you actually memorised all 18? No, let’s give you a quick refresher:

My point here is: Teclis is known for leaning on the particularly strong spells, but he’s also flexible enough that you can slap him in an army with very little else in the way of variety and still have all the tools it needs to succeed.

Bonus List Coverage Because I Write This Article And I Wanna 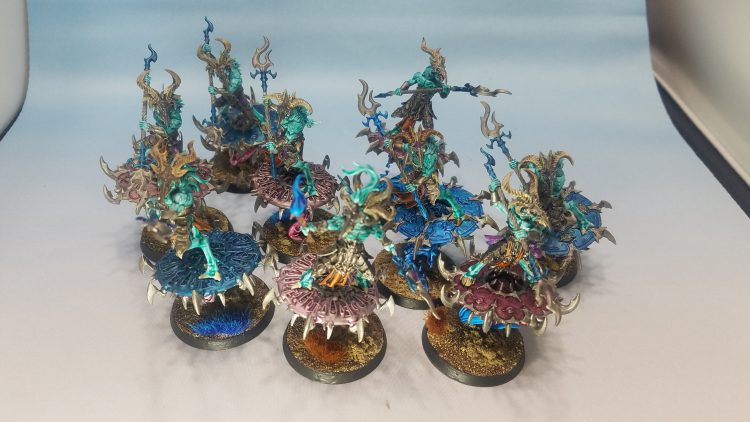 BoC finally make a splash on the competitive scene with a fun and powerful list that immediately makes you want to buy it (and then contemplate building and painting it PLUS the summoning pool, then crying and emptying your basket). 173 wounds that start on the board that will only grow in number as the game progresses, 3 units of hard hitting cavalry that fly 16″, and some very cost effective dragon ogors to gum up the board while the summoning engine gets going.

Let’s briefly summarise what the recent WD update did for BoC, as viewed through the lens of this list:

Rounding out the list are some untamed beasts, which basically do what ungor raiders do but cheaper – providing a pregame moving screen that doesn’t give up broken ranks.

A two-day, five-round event held at Battlefield Hobbies in Daventry, England. You can find lists for this event at Tabletop.to.

I’ve been watching Declan tweak this list since I first saw it at PSU a few months back – it’s taking the excellent warscrolls from Ironjawz and pairing them with a set of allegiance abilities that allow them to better play the long game, as generally by late round 2 you can be expecting to hit and wound on 2s for most of the stuff in your army.

So the list can teleport stuff, the Mawcrusha can hang back and threaten the entire board as needed, it has a lot of wounds to chew through, and then there’s the Wurgogg Prophet. The Wurgogg is notable for it’s eye stare, where it can give up it’s spellcasting for a turn in order to perform a game of russian roulette chicken with a target of choice. Go and look up the warscroll, it’s a blast.

I’ve been playing Big Waaagh myself and love the toolbox nature of it, and Declan leans into the strengths of the faction hard with a lot of units that really benefit from the suite of buffs unlocked as the game progresses.

Baz is a lovely gent and I’ve had the pleasure to play against him recently at Sheffield Slaughter. The list leans into what DoK does best – be a dick with Morathi and some great damage output from the snakes.

Thanks to the versatility provided, this list can play well defensively and offensively, and Shadowstalkers can threaten the backboard if your opponent doesn’t maintain screens all game thanks to their movement phase teleport.

3 more players finished on 4-1, which we’ll cover below:

Next Time: More Fallout from the Hunt

That’s it! The Idoneth and Fyreslayers updates are upon us now and we’ll see how they pan out – I expect we’ll see some Idoneth lists podium fairly quickly as it’s a popular army for competitive players and they look rock solid going into the current metagame. See you next time!