Hey folks! Thankyou to RagnarokAngel for covering in my absence last week – if you’ve been following me on twitter you’ll know that my internet got cut off for several days and left me in both bored and unable to work effectively. But things are back on track and what a beauty of a slate of tournaments to cover this week.

52-player, 5-round Grand Tournament in Boise, ID, US on July 30 2022. All the lists for this event can be found in Best Coast Pairings.

Soulblight Gravelords – Jeremy Veysseire – Neferata takes the field in this Legion of Blood themed list that packs no less than 3 endless spells.

Stormcast Eternals – Thomas Zhennann Guan – Thomas is on a tear lately, with today’s offering being a rather balanced arms Stormcast list with a hint of Ghurish spice.

Let’s start with Tom’s list – it’s a lot of potent save stacking potential with either the blob of 10 Protectors (who have effectively a 2+ save) or in one of the premiere hammer units in the 4 Fulminators he’s rocking. This is going to give Jeremy some trouble as Tom isn’t overly exposed to his bounty hunters (as only the Liberators are Galletian Veterans here) and will have to do things the hard way – either hoping for rolls of 1/2 on saves or mortal wound output from the Grave Guard. The Ghur mage/Translocate combo is a rock solid bit of tech that I expect we’ll see more and more of as things proceed. For those unaware, a Ghur mage can cast Wildform, his warscroll spell with an innate +1 casting bonus that will give the affected friendly unit +2 to run and charge. This means that suddenly those Protectors can be flung into your opponent’s face with more reliability as a 7 inch charge is much more realistic than a 9 inch charge.

That said, his opponent Jeremy has some really difficult things to shift himself, as Neferata’s Dark Mist spell can effectively give a unit an upgraded version of Ethereal (they ignore negative modifiers but not positive modifers to save) to a unit provided he can get the spell off. That means those 10 Blood Knights could be rocking a 2+ save that Tom will struggle to crack. He’ll need those Longstrikes to roll 6s for precious mortal wound output to make a significant dent in them… or simply stop the spell from getting cast in the first place. The Arcane Vampire Lord is going to be key here because she can be casting those Endless spells with an innate +2 bonus to cast with a reroll thanks to Master of Magic. So she can set up Cogs to help Manny/Neferata and then on later turns throw out Purple Sun or Horrorghast with reasonable reliability in this matchup as Tom doesn’t really have effective antimagic here. 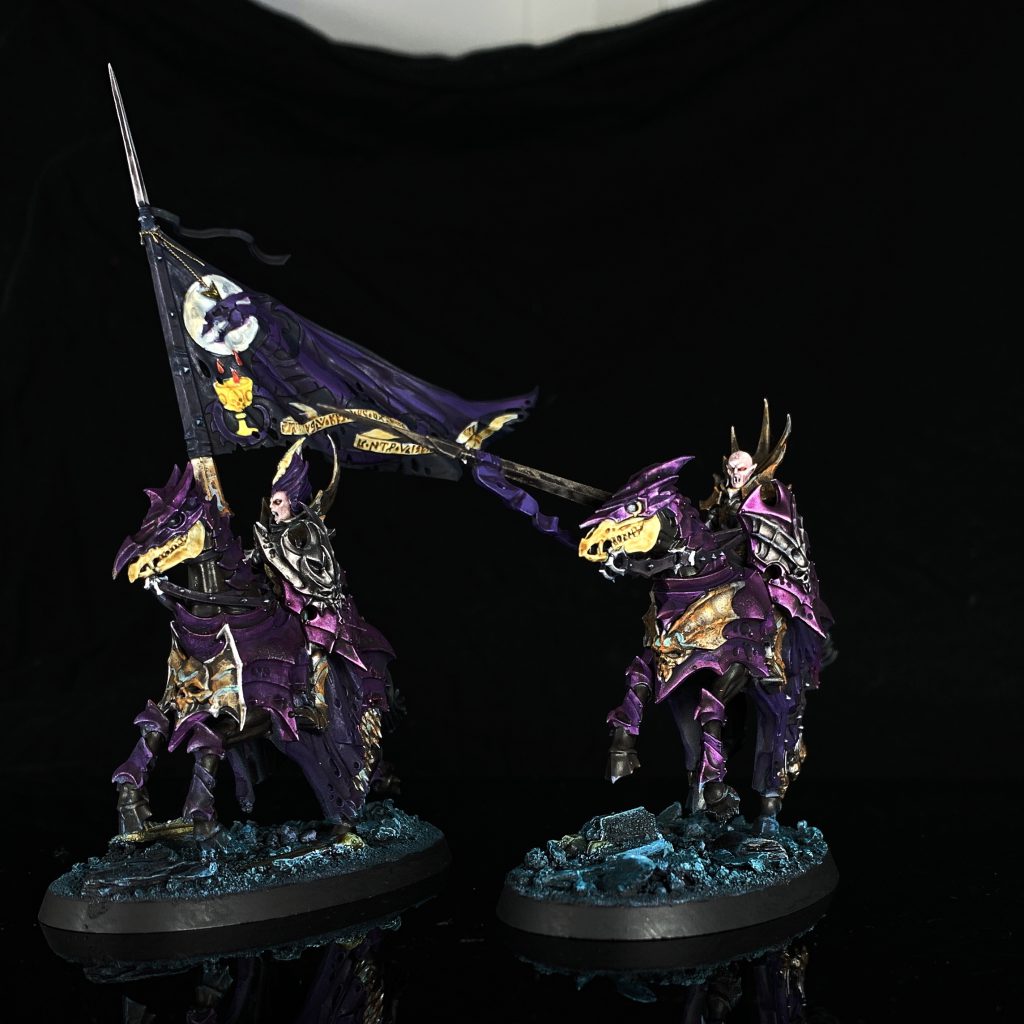 It’s a fairly standard core of SBGL lists we’ve seen since last season, but tweaked and modernised a bit for the new season. Legion of Blood is an unusual choice here, but makes sense when you consider that Vampire Lord enhanced spellcasting just makes the rest of this list’s engine better.

Dawnriders in Bounty Hunters is a nice little bit of innovation for the new season that will absolutely wreck the day of armies like Nighthaunt at an effective price point. Let me put it simply: A unit of five could throw out 36 2 damage attacks against a one wound unit for 140 points.

Want a bit more spice? The Loreseeker not being Unique anymore means a Blade of Leaping Gold and Flaming Weapon is fair game, which means 7 D3+1 damage attacks, and it’s Lone Agent special rule is just such a dick move as it can very effectively lock down an objective and demand an answer.

34-player, 5-round Grand Tournament in Lockport, Illinois, US on July 30 2022. All the lists for this event can be found in Best Coast Pairings.

Stormcast Eternals – Alan Bajramovic – Stormdrake Guard are back with a vengeance!

Stormdrakes took a beating in the last balance pass, losing their signature once per game hero phase move + charge, exchanging it for a once per battle free charge reroll. That said, the scroll is still *very* efficient, just not necessarily worth outright spamming. Alan has brought 8 of them, and it’s a very good matchup have them in because they’re resilient enough to stand up to the shooting Cheryl has, and their mortal wound breath could be pivotal in dealing with the High Gladiatrix and really mitigating the damage output of her battleline.

Cheryl wants to hope to get Mindrazor off and protect the High Gladiatrix, because if she can then those Witch Aelves are going to absolutely *butcher* the dragons, with a little help from the double shooting bow snakes. You didn’t think I forgot about them did you? The heartrenders will be useful for an easy battle tactic and harassing the backlines, but the vyper will likely be dead weight here.

A one drop Stormcast list effectively controls the early game pace as it’ll happily slide underneath everyone stocking up on the new battalions, and it also means it can go first against all in alpha strike lists as well if they’re both one drops and Alan wins the roll off. Gardus likely gets tucked in deep strike to deep strike in for optimal placement of the 5+ ward for the dragons as they make their initial charges.

It’s a very optimised list that just does one thing, but does it very well – apply dragon liberally to your opponent’s deployment zone.

Vanari Bladelords! They’re almost certainly only here because they’re the cheapest battleline LRL have and he couldn’t make the points work otherwise, but still! We’ve seen these lists without Sentinels before, instead capitalising on the raw spellcasting might of Teclis and the relative efficiency of 40 Wardens, who are even more irritating here in Expert Conquerors.

There’s a nasty little bravery bomb element to this list as well, combining Voice of the Mountains with Horrorghast and everyone’s favourite annoying lady the Cathallar. What it means in practice is your opponent has 2 (or 1 after the initial turn) less bravery, can’t use inspiring presence, has d3 extra models run if they *do* fail a battleshock… oh and the Cathallar can use Emotional Transference to move battleshock modifiers from your unit to your opponent’s.

30-player, 5-round Grand Tournament in Telford at Glasshammer on July 30 2022. All the lists for this event can be found in Tabletop.to.

Honestly guys I’m not even sure how to process this matchup, Adam’s list is so out there. The damage potential here is through the roof, as each Cockatrice has a 22″ threat range to do D6 mortal wounds each thanks to Petrifying Gaze, though only on a 4+. What this means in practice is that if Adam can get enough Cockatrices up the board to gut Dan’s shooting, he should easily take over the match as his Cockatrices can handily fly all around the board, taking over objectives for burning purposes.

On the flip side, Dan outranges him with his shooting, and the 5+ ward the foxes have as well as their shooting phase move can help protect themselves somewhat while they whittle down Adam’s firepower. He also has the advantage of priority, so he can either take first to get the first shots in, or corner deploy and give it away and bank for a double.

It’s just a brutally efficient trading army isn’t it? Each of those Cockatrices count as five on objectives, with the devastating (if unreliable) firepower to deal with most threats at range. They’re incredibly fragile, but then again who cares when you pack so much value into such a cheap monster?

Be’lakor and the BoC battle trait suite is just icing really, as Adam can afford a very efficient battleline trading piece in 6 Dragon Ogors, and Be’lakor can shut down the key enemy shooting unit long enough for the Cockatrices to neutralise them. The last battlepack rotating out means that Adam isn’t giving up a near guaranteed 5 extra VP a game either, so it only got better with the new season.

As I suspected, a new predator has arrived to prey on all those bounty hunter lists – shooty 1 drops. Don’t have to worry about your opponents hammers if they’re dead before they touch you. Lumineth hasn’t always been the most popular choice as it’s a very technical and difficult army to pilot, but it does have the tools to adapt to whatever the meta is, even if some of the roster feels a little bit underbaked.

Interesting to see no Seraphon in any of these top results, nor any Nurgle in any of the top two spots. A refreshing change that makes me think that it’ll be a while yet before we’ve fully settled on what is ‘top tier’ at the moment.

Ellarr has recently started a Youtube channel to catalog those thoughts that spilleth over from Competitive Innovations which you can find here. If you have any questions or comments leave one down below or email us at contact@goonhammer.com.