Contemptor Kevin’s Road to the West, Pt. 1: How do we load this wagon?

Now that Warhammer events and conventions are going forward again more-or-less safely, I’m rip-roarin’ ready to go. After a couple of years of not really having much of an opportunity to play in Warhammer events due to various conflicts, it’s time for me to get out of the painitng cave and to rolling dice. So I’m going to attend events again! Specifically, I’m attending and playing in:

Both are great cities that it would be wonderful to visit for a weekend, and now that it’s safe-ish to do so, I’m going to go explore! For what it’s worth, I haven’t really been able to play much in 9th Edition, what with the deadly pandemic and all. So to the extent I have played, it’s been in the context of the Astradus narrative campaign that Robert “TheChirurgeon” Jones is GMing. In that campaign, I am using my Space Wolves because:

1) They have more interesting crusade rules than the Ultramarines
2) I have more opportunity to play them
3) They were an army I started last year once it became clear that going to Adepticon 2020 was going to be insanely dangerous
4) The army is designed, to an extent, for traveling because they are low clearance models

So, I need to finish a 2000 point Space Wolves list and ensure that I can take the models in an airplane.

Now, as I’ve been hard at work for the past sixteen months on this army (2), I have *most* of what I want to use completed. That includes 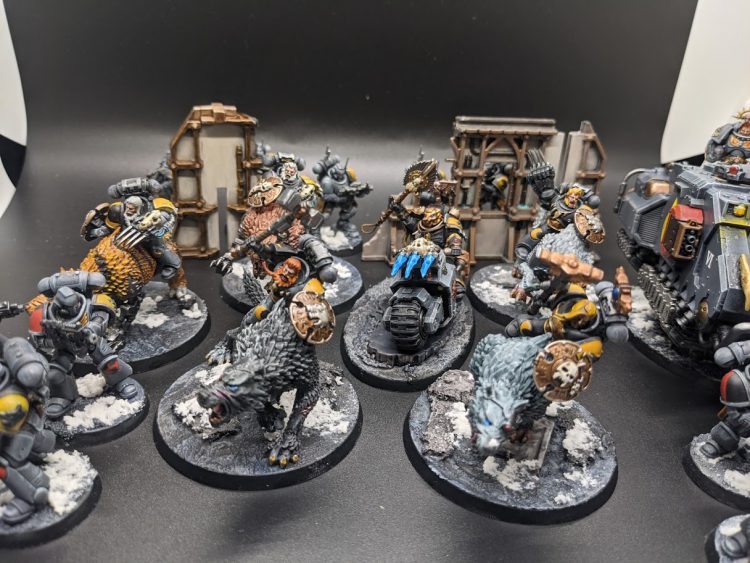 What I’ve done so far doesn’t have as much melee as I’d like: a unit of Bladeguard, a Redemptor Dreadnought, and probably a unit of Incursors at the very least to have a good melee core. Those models all need to get built and painted. While I have the Bladeguard unit subassembled and primed, the Redemptor and Incursors are not yet primed. Unfortunately for me, I live in the Washington D.C. Metropolitan area and it’s currently mid-July. Aka, it’s regularly above 90 degrees with high dew points. And I do not own an airbrush (or have room for one in my condo, because of both space and a little puppy who chews on everything), so it’s rattlecan priming for me. So the Redemptor and Incursors are going to have to wait until it’s sufficiently cool and the humidity is controlled. I also want to give my Contemptor a pair of Volkite Culverins, but they are out of stock on Forge World and Russ alone knows when they’ll be in.

This means my initial phases of getting ready will be:

Our next update, over the next week to ten days, will be about the progress with the Bladeguard.

Thank you for reading! If you have any questions, comments, or suggestions, please drop me a note in the comments below or email us at contact@goonhammer.com

(1) To better distinguish myself from my good friend “Primaris” Kevin and Necromunday’s Kevin Fowler. Astradus has as many Kevins as it does Gregs.

(2) Well, when I’m not painting one of my two other armies, or doing one-offs because I like painting random leader characters