Continuing to be the Villian: A Naramyth Trip Report

I’m back! Not a week after taking home some hardware from the Canadians up at the Wheat City Open we had our monthly Two Rivers RTT, this time in Fargo. We had 19 people show up, including two Northern Front-ers that I got to play the week before. The first draft of the 2020 ITC missions dropped the Friday before and the TO decided we would be using the new format, no seize and all.

The list is exactly the same as what I brought to Wheat City. I’m certainly not thrilled about the libby but the list ran pretty well the week before so whatever, let ‘er rip. 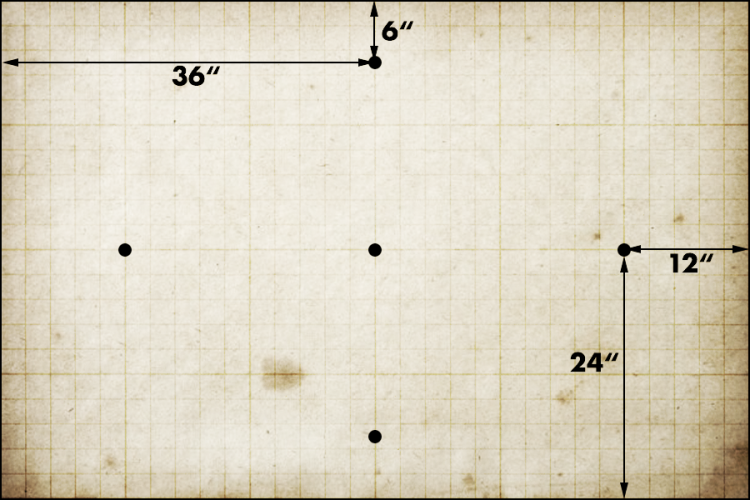 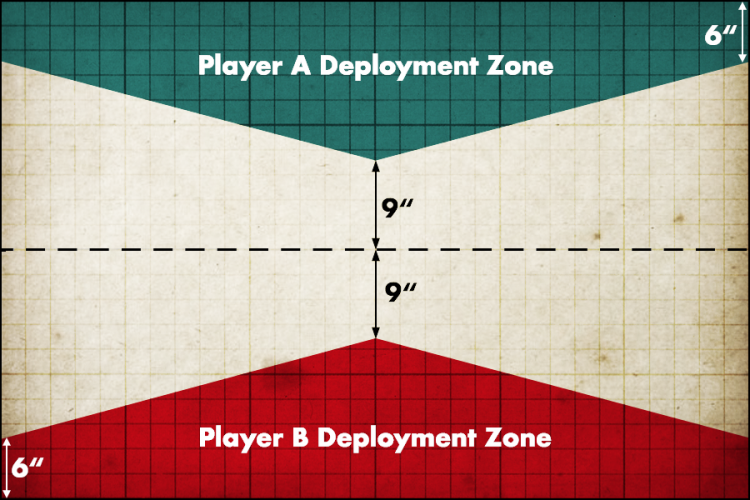 I won the roll off and It’s a huge zone-castle, all it shoots is mortal wounds and plasma with army wide  -1 to hit, -1 Strength when being shot, and invus everywhere. It’s dangerous to really be out in the middle but I want to get the bonus and hold more. My game plan is to throw my dreads at him to absorb as many smites as possible with the 5+++ strat. Spells were Might of Heroes and Null Zone, Warlord trait was the bonus repair, just in case I needed it. I picked Recon, Gangbusters, and Big Game Hunter.

Right away it was very weird just putting things on the table without a chance of getting punished. I was able to put Intercessors on the line and Eliminators on all the objectives. My first turn of shooting was killing the Hiveguard, and starting to thin out the Zones, while grabbing the middle with the Contemptor. He countered by not moving and killing a unit of Eliminators and crushing the Contemptor through my FNP. My turn two was me killing his Biovores, the Maleceptor, and putting six on the Exocrine. His Rippers came down in my bottom right part of my deployment zone and instantly picked up two points on Behind Enemy Lines.He did tear down the second dread however I continued to chip at him and had the castle cleaned up by 5.

He was pretty excited to see if his theory of Invul and modifer stalking could hold up to all the -3 or more AP shooting that comes out of Iron Hands. And he did reasonably well, but because he was just stuck in a very specific formation to make sure all the auras worked he couldn’t really play the mission.

Me being bad at this game and not moving forward with my libby to Null Zone his Zoanthropes. 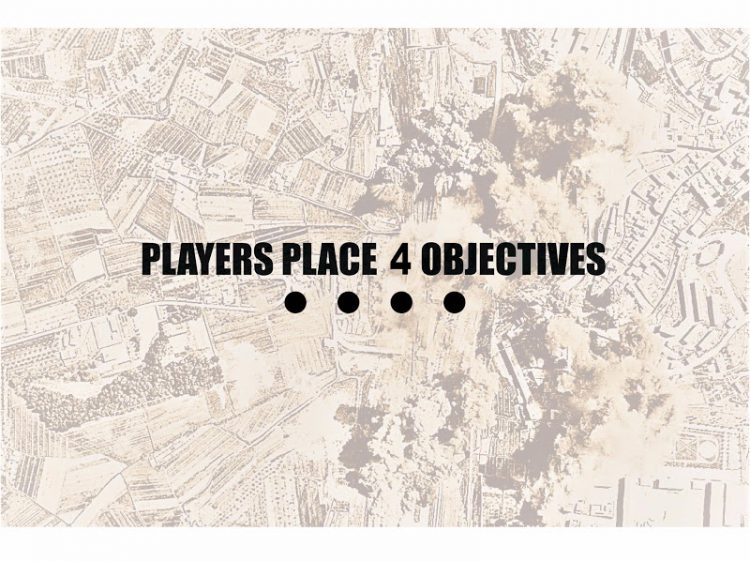 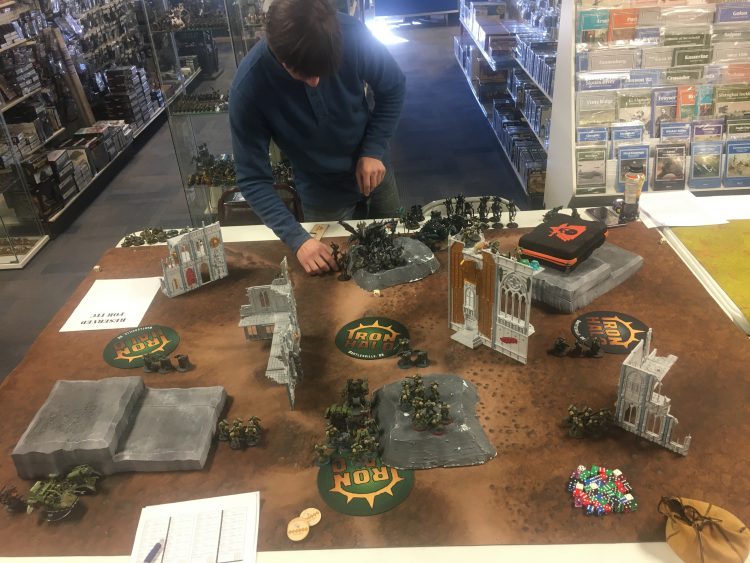 Guess who forgot to take pictures of the boards? The map was pretty similar though.

He kind of has a highlander list. He’s coming back to his DA after playing Custodes all year and he’s sort of trying things out. I…I am not. I grabbed Machine Flense and Psysteel. I also won the roll off.

I got Attacker. By the beginning of his turn two he had ~10 Intercessors, a single Eliminator and Sammy. He shook my hand.

Not much to say. He’s trying some new stuff and I’m already in a pretty refined place. Once I had attacker and could grab the bonus right away without reprisal it was over. 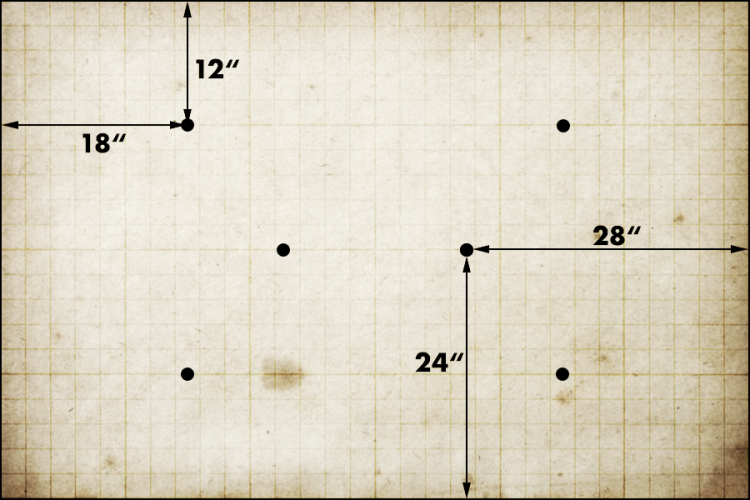 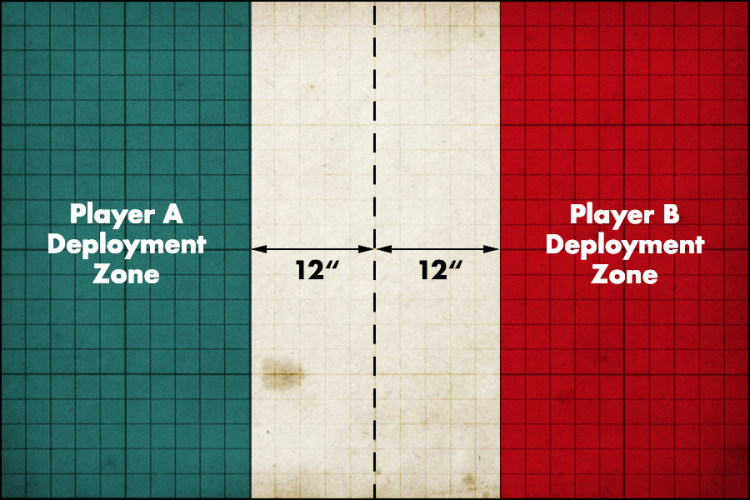 It’s Mark! On Top Table! He has Grey Knights, but it’s double Paladin bomb instead of trying to have a Land Raider and a pile of characters. I win the roll and take Attacker. I knew Gangbusters, and Recon were no problem. I settled on Old School as my final secondary. Spells were Null Zone and Might of Heroes. I grabbed the Repair warlord trait and put Student of History on my Captain, He picked Behind Enemy Lines, Recon, and Marked for Death (Drill, Gravteam, Smash Captain, Contemptor).

Again I setup without fear. This time the Eliminators grabbed objectives and recon and I moved forward along the top of the map as he was turtled up in the bottom right ruin. I was just able to see a sword sticking out and shot some missiles into him while opening up with all my Eliminators on his Librarian. I killed a couple Paladins and put 4 on his librarian. He uses Astral Aim and kills one of my Eliminator squads while Gating his Librarian far into his corner to prevent me from shooting him.

My turn two the Drill comes down as I continue to push forward with the dreads. I get a couple more Paladins from lascannons and missiles and the grav unit kills 9/10 Paladins through Sanctuary and Transhuman Physiology (the -1 to wound spell was on the other squad), my Eliminators and Thunderfire finish off the last guy. My drill then also makes the charge into the other Paladin squad and kills 4, but dies in the back swing. His Strikes all come in in his back field to clear out the Suppressors, Company Champ, Scouts, and grav team. He makes the charge into my Contemptor but doesn’t kill it through Ironstone and its native FNP.

My Captain comes in to help dig out the Paladins while my shooting starts chipping away at whatever Strike Squads I can see. I do make a big mistake and bail out of combat with Master of History instead of sticking in to try to fight as the Captain dies. Instead he is able to smite his way out of the Contemptor and picks up the captain in shooting. His remaining three Paladins push forward and make a charge to a ruin wall and kill the Eliminators hiding on the other side.

I finally manage to clean up the Paladins on 4 and wind up losing basically everything that isn’t Intercessors trying their best to grab objectives and get the bonus. On turn six I use my thunderfire to kill a single Strike marine for a Kill at the end of the game and do advancing to grab hold more and bonus whole on the bottom of six Draigo winds up Gate’d into my backfield and kills Thunderfire Techmarine. We tally it up and I’m ahead.

Double Paladins are real and if I didn’t have total board control until turn 4 this would have been a real uphill battle.

Rerolling deployment zone! We rolled up Vanguard and he wouldn’t have had a place to hide. With the reroll we got Hammer and Anvil which actually made this a game. Eliminators grabbing the middle was huge. Again, no seize meant I could just be out there without worrying about getting seized and wrapped or just killed without getting value.

Old School. I should have picked Behind Enemy Lines. The Drill+Devs+Scouts is three units by themselves.

3-0 Baybee! And as of this writing it puts me 6th in the ITC (I know, only two scores, beginning of the season, Stupid Boon is 5th, shut up). I do get a couple weeks off now. Our next event is the Two Rivers Open in Fargo on 3/7. I have a couple weeks to do some editing. I’ve not been thrilled with the Librarian and if he gets turned into a Primaris LT I can do some re-jiggering for a third Suppressor squad and sneak in a Primaris Apothecary for some pseudo Broviathan things. Will the hero Speeder of Wheat City being cut be my downfall? Is a 6+++ bubble actually worth it? Will the lack of a deny or Null Zone bite me in the butt? Will #bringbackseize actually work? Tune in next time!

And as always, if you have any questions or feedback, drop us a note in the comments below or email us at contact@goonhammer.com.