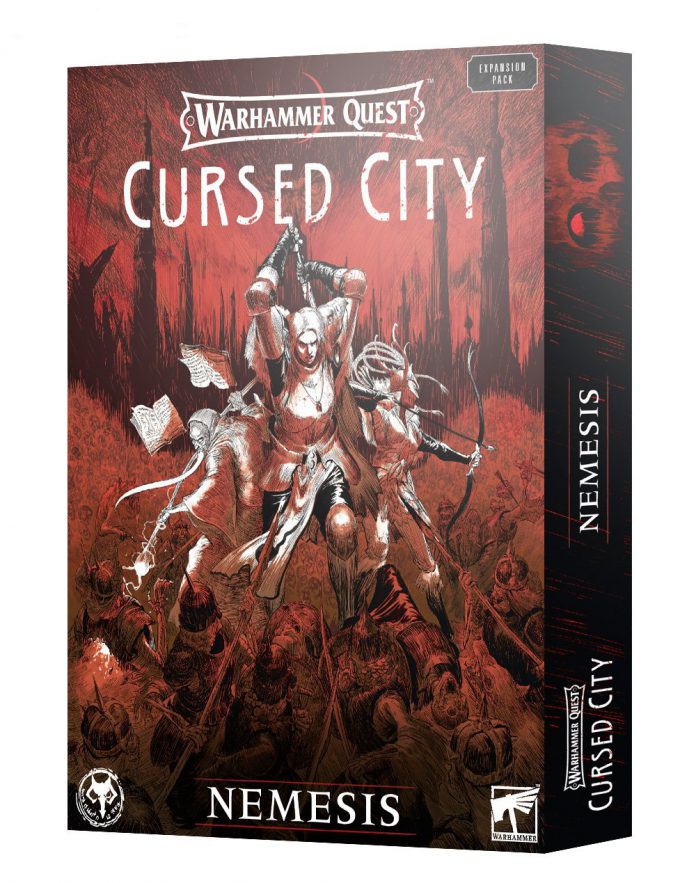 This review was completed using a free copy of Nemesis given to us by Games Workshop.

Today we’re looking at the final expansion for Cursed City: Nemesis. While the core game had players acting out the fight against Radukar, the lord of Ulfendarn and Nightwars had them putting down his would-be usurpers attempting to fill the power vacuum, Nemesis puts a cap on the story and ends it for good.

Much like Nightwars, the only contents are a Quest Book, enemy profile and encounter cards and some tokens. The Quest Book includes the instructions for playing the module, the story material and the random events that can occur. The tokens are actually pretty slim here, even more so than Nightwars was. There’s just not a lot that’s exciting here.

Also like Nightwars, you will have to purchase the models separately. This time you need a Wight King, Necromancer, Grave Guard, Vargheists and some Dire Wolves. No named characters this time, just stuff to pad out the encounters, which is a bit less exciting but we’ll get to that.

All in all the size of the package feels…unnecessary. While I’m sure they were just reprinting using the same box as Nightwars, the contents feel so anemic and it gives me flashbacks to old PC game boxes (and not the ones with all the cool feelies). This could have been compartmentalized into a smaller package quite easily.

There are going to be minimal spoilers for this expansion and some spoilers for the core game and Nightwars, so stop here if you want to go in fresh.

Despite the Hero’s best efforts, Ulfenkarn is lost. The amount of undead flooding the city streets has increased a hundred fold, Radukar’s old lieutenants return from the grave and the city itself is collapsing from tunnels tug underneath the earth. It is now impossible to go anywhere in the city but Haven, and the party’s airship is unable to leave due a barrier of Necromancy keeping them inside. The refugees in Haven simply wait their death, as Radukar and his minions prod the fences to prepare for the day when a ritual can sacrifice them all at once and energize him completely.

There is one glimpse of hope – while saving Ulfenkarn is no longer possible, escape may be. An unknown benefactor, possibly an agent of Neferata, has informed the heroes that there is a realmgate below the city. If the heroes can find it and activate it the refugees can escape before the entire city is dragged into the abyss below.

There are a handful of new mechanics that interplay with the original game and Nightwars. You are meant to shuffle all the cards into one big deck, and combine all the mechanics from both sets. The first new mechanic is Sinkholes, representing collapsed sections of the city brought on by tunnels being carved underneath. These are tokens placed on top of the map where dictated and pose an obstacle for heroes and enemies alike. Heroes cannot cross them and if they take damage near them, that damage is increased. Should they be pushed onto them (or it opens up under them) they will need to make an agility check. Mercifully, failing just does damage, they wouldn’t be so cruel as to kill you instantly. This doesn’t apply to enemies though! They also take additional damage when injured near them, and can die instantly if pushed in. This is a solid mechanic that keeps players on their toes and gives them more terrain to play around with on the board when considering tactical placement.

The other new rules aren’t as big. Major Actions now exist that are actions that require a dice roll above 6, so multiple dice must be used to add up to the required value. Exalt Tokens are tokens handed out by events that let a hero start an adventure inspired if they spend them. Additionally, to represent the return of Radukar’s forces, Reborn Evil states that if a lieutenant from the core game appears on a card they must appear attached to the battle, and to account for there being multiple versions of Radukar now in the deck, The Lord of Ulfenkarn states that there will only ever be one on the board at a time. He may be powerful, but he can’t be in two places at once.

A few more upgrades exist for the heroes as well, as to be expected. Paragon Classes now exist, another specialization to delve into once you cap your Elite class. These work exactly like Elite classes did, 2 options for each base class that further specialize their role. Again, no new characters but not surprising with the end of the story being nigh.

Character upgrades are much easier to get now, characters no longer lose Realmstone at the end of each adventure and can trade in Empowerments they no longer want for half their value. This allows players to grab the exact upgrades they need for the final battle and trust me-you’ll need it.

Nemesis is much more linear the base game or Night Wars. You have a 10 step timer and  3 types of missions: Interrogation, Scavenge and Secure. Unlike last time, only interrogation missions proceed the plot. In Interrogation missions, the heroes find Vyrkos Blood-born and beat the hell out of them to find clues where to get the realmgate. Scavenge allows you to farm resources, Secure will roll back the timer 1 step. Failing any mission results in gaining 2 steps on the timer, so you probably will need to farm some resources unless you just bang out 4 interrogation mission in a row and say to hell with it.

Frustratingly, this isn’t the end. Players have to do this again to actually activate the realm gate, only harder than before. Once that’s done though, you hit the “Point of No Return” and must do a serious grueling battles to the end. Five battles in a row and failing any of them will force you to restart the level with the timer ticked up – and no way to bring it back down. So make sure you’re ready before you enter.

I won’t spoil the ending, but I will say it’s a bit lackluster, especially after such a grueling final series of missions.

I am…not too thrilled about this expansion, especially to see the game end in this state. I’ve personally theorized that due to the shipping and production problems that have plagued most of the world for the past few years, some choices had to be made about what was cut. Cursed City was an untested game and it was better to cut their losses and just sell what few units had been produced, and repurpose the miniatures that were going to be for the game as part of the end of 2nd edition push for Soulblight Gravelords in Age of Sigmar.

Not anticipating the backlash, they eventually did get around to producing a second wave of production, which I am glad for. They likely had the expansions ready from before release of the core game and decided to send them to print. The fact both expansions don’t include models feels incredibly sloppy and while I’m sure it cut down on the cost of production it doesn’t feel great to need to buy so many individual models on top of it. Only dedicated Soulblight players will already have all of them, which is a happy accident but a hard sell to get anyone else involved. The expansions themselves were also pretty lackluster in content. The whole thing feels unfinished and I feel like there is another timeline where this game had more going on. Maybe we’ll see another Warhammer Quest game with a more fleshed out release schedule.

In summary, if you liked the first game and Nightwars and could go for more, you might as well finish up the storyline. Just don’t go in buying this alongside the core game.

If you have any questions or comments, leave them below or email us at contact@goonhammer.com.