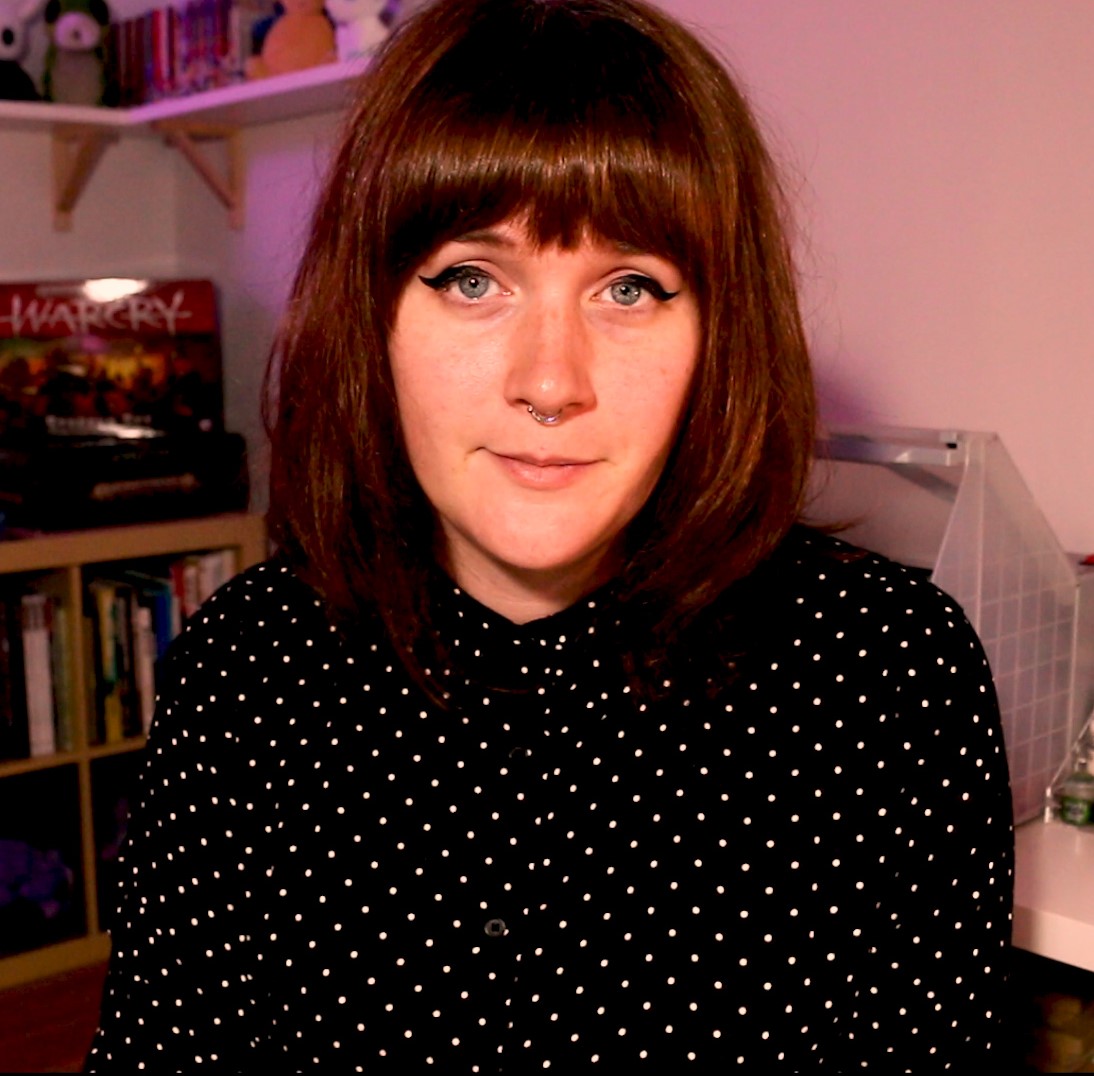 “It was the summer of the year 2000. I’d just read the Hobbit and the Lord of the Rings. I was very into Magic: The Gathering, and I had this uncle who was like… ‘Hey if you like all of this stuff, do you want to play D&D?’.” Dana Howl’s miniature painting origin story begins in a familiar way, but her art is anything but ordinary. If you’re not following her on Instagram or Twitter, you’ve missed out on some truly striking paint jobs and an inspiring #hobbystreak currently sitting at over 250 days.

I started following Dana right as she was finishing up the Mausoleum kit that Games Workshop produces for various Age of Sigmar products. I’d seen a few different takes on it – mostly various shades of stone and different metal weathering techniques for the roof – but I’d never seen anything quite like this. 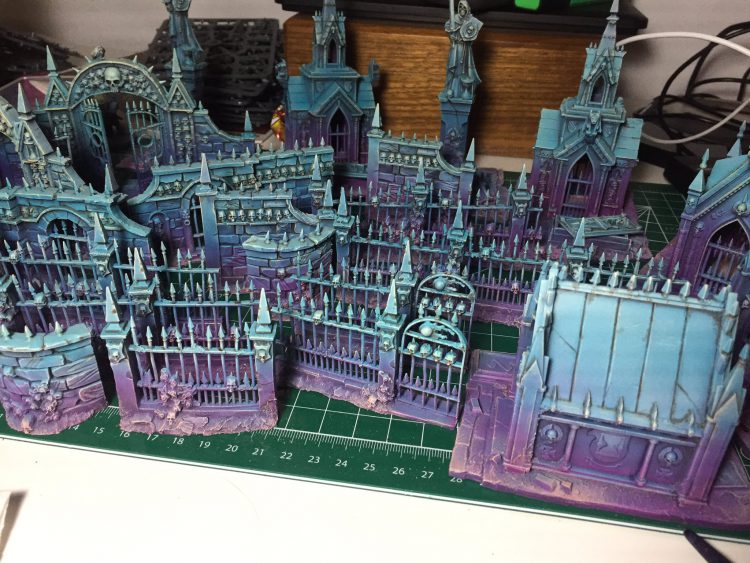 It stands apart from the typical Serious Soldier paint jobs I see out in the wild and I wanted to know where that style came from.

“My background is in animation/visual arts communities and not the wargaming communities” wrote Dana. “I think I just didn’t understand at first why people were using such drab colours to paint their figures. I take a lot of inspiration from animation, toys, and various types of art for my colour schemes.”

Dana went to school for animation and worked in that industry for a couple of years. She’s also got formal training in drawing, painting, etc. I think that background – coupled with the fact that she approaches miniatures first as an art form not a gaming implement – shows in her stunning models. 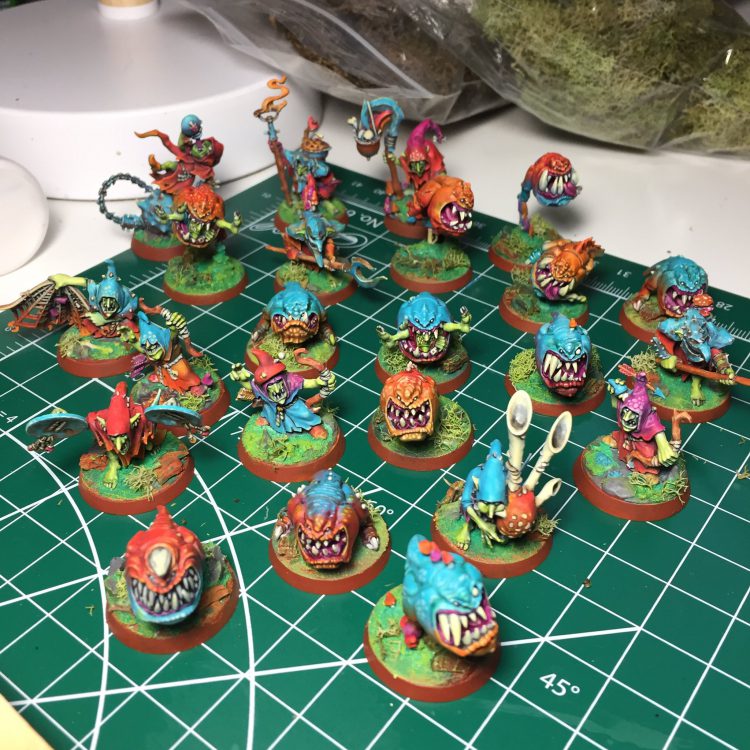 “I started sculpting my own figures out of sculpey, that resembled the monsters I wanted to play with in my own rpgs (inspired by pokemon and kirby characters) partially because my parents wouldn’t buy me any miniatures, and partially because there weren’t a lot of miniatures that I found appealing at the time. In 2001 I became enthralled by the D&D Chainmail Miniatures Game and the Lord of the Rings Strategy Battle Game, and these would be the first real “miniatures” that I would paint, using my mother’s craft paints, and eventually, a few citadel paints that I would buy with my allowance.

I would continue to paint occasionally throughout my life whenever I was playing D&D, but I would also take several years off from painting as well, I really only painted when I needed figures for an RPG I wanted to run. It was only with the release of Fantasy Flight’s Imperial Assault in 2014, and Sorastro’s Painting Guide for that game, that I would get back into painting in a real way, buying an airbrush and devoting hours to actually learning how to paint better.” 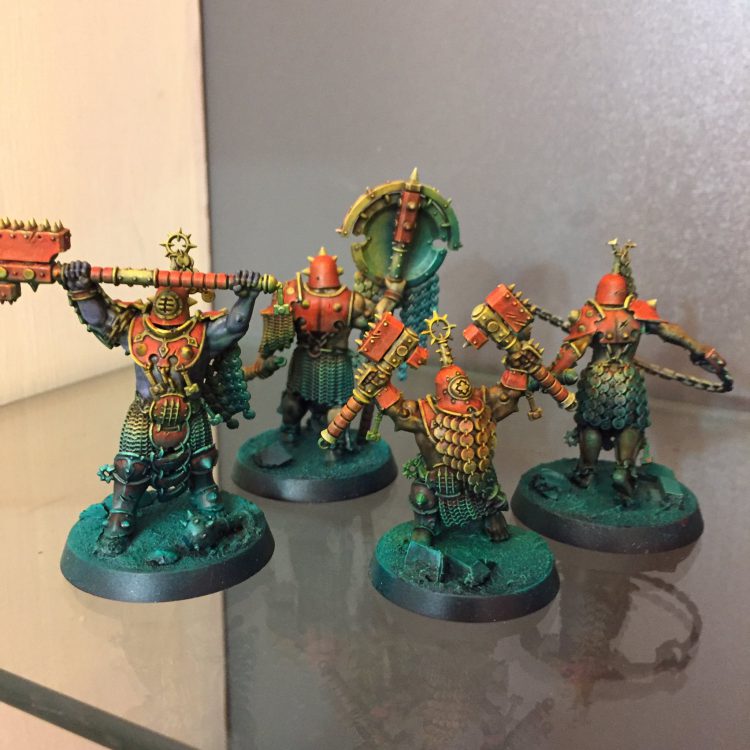 Dana’s got plans to play Warcry soon – I’m a huge fan of it – but she currently doesn’t play any Games Workshop games. I noticed that her current projects are GW products, and was curious why that was. It turns out that the main reason is community. “[The GW community] is much larger than any other. The minute I started painting GW products, I started getting a lot more responses to my work, and feeling more like a part of a community. When I post non-GW miniatures, I find the audience doesn’t really engage with it as much, so it’s not as fun to share that sort of stuff online.”
Through her, I learned about the #hobbystreak community. I’ve quickly jumped aboard and while my paint jobs aren’t anywhere near her level, the motivation to keep painting is very strong.

“#Hobbystreak is actually the hashtag that got me into painting in a more serious capacity, and changed the way I think about painting. The Hobbystreak challenge is to devote at least 30 minutes a day to your hobby, and then post about it every single day. The goal is to not break your streak, so you post like… hobbystreak day 1, hobbystreak day 2, etc…. but when you break your streak you have to go back to day 1. It’s kind of a fun game that has greatly increased my hobby productivity. The pressure to post something daily is strong, and once you get up past a few hundred days, you don’t want to stop the daily practice. I feel like this has greatly increased my skill level, just the daily practice and feeling like I have to up my game to show off to people on twitter, I find it really motivating.” 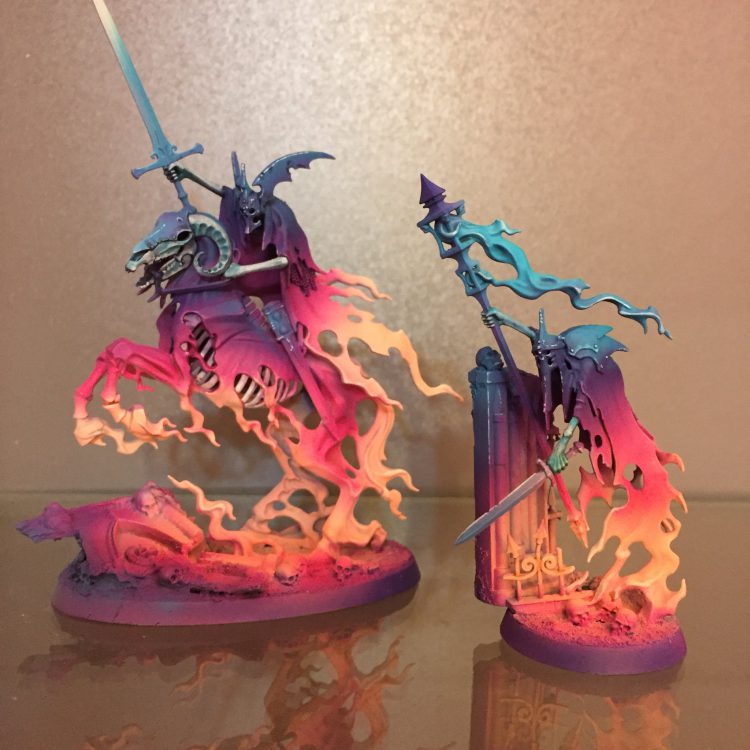 My #hobbystreak is currently sitting at 8 days. Maybe one day I’ll pass 100, but for now I’m content to use the art I see in that community as inspiration. Dana’s comes from somewhere else.

“My nighthaunt are based on vaporwave album art, since that’s what I was really into at the time I was painting them, and my goblin colour scheme is based on a “90s summer nostalgia” feeling, based on the palette of popsicles, kool-aid, stuff like that. My current project: the Iron Golems from Warcry, are based partially on the colours of the fall leaves outside my window, but I also took inspiration from the game’s box art, which I really like.

For me, I try not to use the colour wheel as a guide when drafting a colour scheme. Rather, I usually think of an idea, like… vaporwave nighthaunts, creamsicle goblins, and then I find a piece or pieces of 2d art that I like that embodies that idea. Then I just copy the colour palette of the existing art, but the real hard part is translating the existing art to a colour scheme for figures. Usually I draft a mockup in MS Paint of how the figures would look, and then I try a test figure before painting an entire army in that scheme. I use the colour wheel more as a tool when I get stuck, like if I’m thinking “these colours almost feel right to me, but not quite, I’ll check how they relate to other colours on the colour wheel, and that’s usually where I find my answer.”

Dana recently launched a YouTube site to share tutorials and go in-depth on how she paints. I’m not the only one curious about her paint style and techniques and she hopes the channel becomes a way to share her passion and methods, while growing the community beyond its stereotypical presentation.

“My biggest motivation to make a youtube channel was that I was really dissatisfied with the current hobby creators on youtube. I looked at what was available in terms of hobby tutorial content, and it was all variations on the same white guy, mostly teaching the same types of content, using the same camera angles, with the same macho kind of attitude. I feel like just by existing on youtube as a woman who is painting in a different style, in a more open, friendly way, I’m giving people an alternative to the usual offerings.

I’m basically just making the content that I wish already existed, as well as answering as many questions about my process as I can. When I get a question on twitter about how I did something, I write it down as a video idea now instead of just responding. It seemed like a natural progression of my daily twitter posts, it’s way easier to show someone how to do a technique in a video than trying to explain it through tweets.”

Her first video is on underpainting, and is definitely worth checking out. I’m looking forward to seeing (and learning) more. I would like to extend a huge thanks to Dana for taking the time to answer my questions, and for the information she’s shared online! In addition to Instagram and YouTube, you can find her on Twitter as @dana_howl. Her Patreon can be found here.