Dancing with Shadows – The Lore of Battletome: Daughters of Khaine 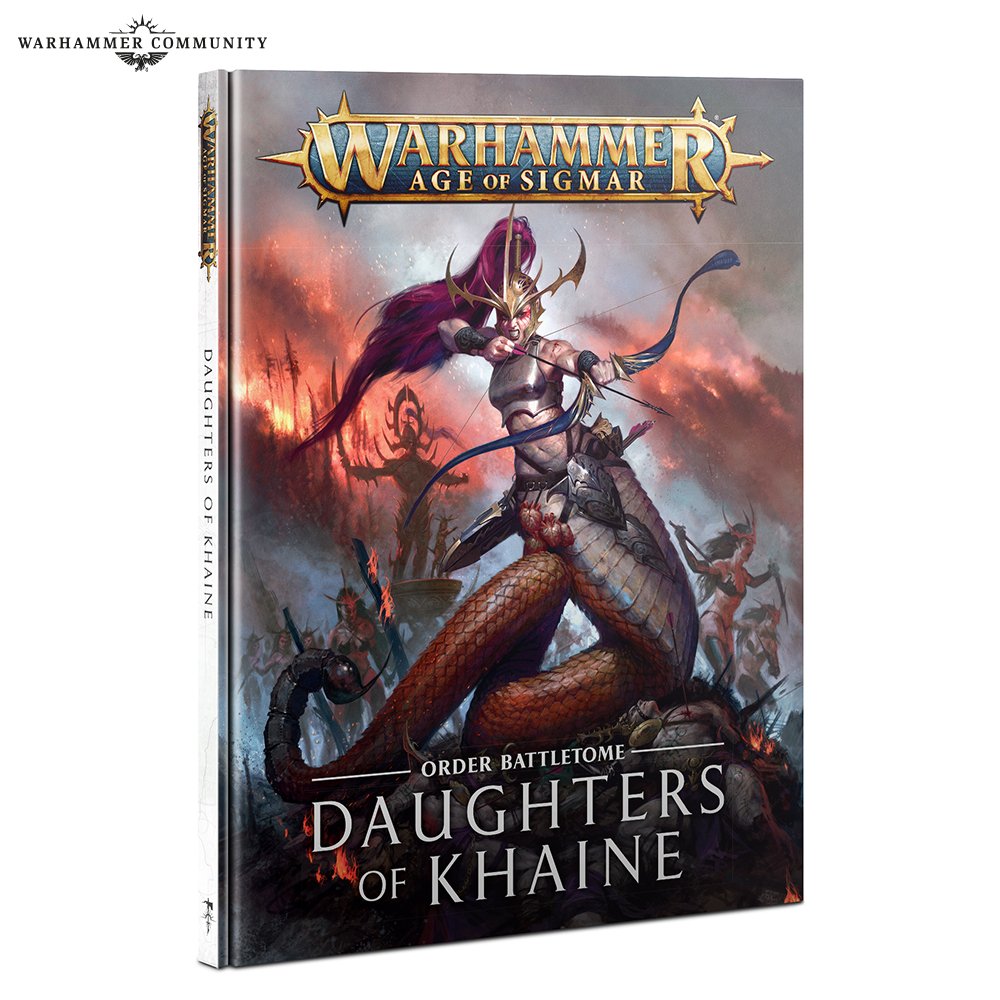 The lore of the Mortal Realms is deep and complex, from The World That Was, to the Age of Chaos to the Nine Realms as they stand today, the factions in Age of Sigmar have been shaped by its cataclysmic past and war-torn present. Today we’re looking at The Daughters of Khaine, zealous apostles of the Elven God of Murder from The World That Was.

The Daughters of Khaine

In The World That Was, many elves of all stripes worshipped Khaine, known by his titles of the Bloody-Handed God and the God of Murder. Khaine rewarded his followers who spilt the most blood and spread the most torment. As a result, High Elves saw Khaine as a necessary evil to bolster them in battle, but the largest cults of Khaine came from the lands of the Dark Elves. As twisted beings who enjoyed spreading pain and torment across the world, they were a natural fit for Khaine’s worship. The Witch Aelves called themselves the “Brides of Khaine and were his most fanatical warriors. In battle Witch Aelves fought with a zealous fury unrivaled by the warriors of other nations. They treated warfare as a ritual, a lethal dance in which they would spill as much blood as possible to offer up to the patron god. Those who were injured in battle but survived would face a far worse fate as blood sacrifices for Khaine.

During the End Times, most every Aelf was consumed by Slaanesh. A scant few escaped, but for millennia it meant that only a handful of Witch Aelves wandered the mortal realms. Many were concentrated in Ulgu, the realm of Shadows where it was easier to hide from the dark gods who would hunt them down. They continued to practice their dark rituals of blood sacrifice but as a disorganized cult they were unable to practice on nearly the same level they could before. When Morathi returned from the darkness to aid them the Daughters of Khaine were again emboldened in their quest to serve the God of Murder. Khaine had been killed during the End Times, fighting valiantly against the Dark Gods. In his defeat, he was shattered into uncountable shards, spread across the mortal realms. Morathi encourages her followers to seek out these shards so that Khaine can be reborn, when enough are collected. Her rise in power was augmented by an expansion of new temples across the Mortal Realms. No longer confined to Ulgu, the followers of the God of Murder could now spread their rituals to the furthest corners of the Mortal Realms.

Aiding the Witch Aelves are the equally terrifying and commanding Melusai and Khinerai. Souls of Aelves eaten by Slaanesh were reformed into new bodies more suited to Morathi’s use. Cursed with serpentine and harpy-like bodies, these creations of Morathi act as her elite guard and shadowy agents, carrying out secret assassinations and infiltration missions. Previously, these beings were hidden from the eyes of others, their appearance disturbing both to the Daughters of Khaine and to others alike. As Morathi has ascended to godhood, their presence has been more prevalent. Morathi has slowly been clawing her way into power over the past millennia and now, at the height of her power she has designs to lead the Daughters of Khaine on further conquest of the mortal realms.

Morathi, The Oracle of Khaine

It would be impossible to discuss the Daughters of Khaine without their leader, Morathi. In The World That Was, Morathi was the mother of Malekith, the leader of the Dark Elves. She was one of the most dangerous and cunning women in the mortal realms, operating behind the throne to manipulate schemes that would take decades to centuries to bear fruit. Unfortunately, it was all for naught, for when Slaanesh consumed the Aelves of the world, Morathi was among them. She, however was one of the lucky ones. She managed to escape, albeit not without struggle. She found herself stranded in the deepest parts of Ulgu, alone and nearly driven to madness by her loneliness. Unexpectedly, she would be rescued by Sigmar, who was collecting a team of gods and powerful Mortals from the World That Was to fight the Chaos incursion in the mortal realms. Morathi reluctantly agreed, but was outraged to find her previous nemesis’s, Tyrion and Teclis of the High Elves had become gods. Even Malekith, reborn as Malerion, has attained godhood. She was powerful, but still merely a mortal. Worse still, the other gods did not trust her due to her actions taken against them in the previous world. They would exclude her from their plans, only using her when her powers were necessary. She hated them for these slights, and plotted her revenge.

Her time in the belly of Slaanesh changed Morathi. Although she looked quite similar to her previous form, this was merely a façade. In truth she had become a a serpentine creature. She hated this form, and would disguise herself with a more fitting Aelf form as much as possible, but this illusion was temporary. Under duress she would revert into her monstrous form, something she felt was unbefitting of a queen and took great lengths to hide. When she was able to rejoin the fragmented Daughters of Khaine, she launched her next plot: She had the heart of Khaine, one of the surviving relics of the fallen Aelf War God. Wielding this, she spurred the Daughters of Khaine on to find the other missing fragments of Khaine, promising a grand ritual to restore the fallen god once enough pieces had been collected.

But the Daughters were deceived.

Morathi siphoned the power of their prayers from the followers of Khaine. She collected the shards, but she lied about her true purpose: Instead of preparing to return Khaine, she was preparing for the greatest ritual she was preparing a ritual that would lead to her ascension to godhood. No longer would she be slighted by the other Aelven gods, or even Sigmar himself – she would become an equal to them, and force them to treat her as such. She betrayed Sigmar’s forces by abandoning them in the Eightpoints – in the very heart of Chaos – to get the final pieces of Khaine for her ritual. Then in her own temple Morathi would complete the ritual that would allow her to venture into the belly of Slaanesh and consume the souls of those powerful Aelves long forgotten. She consumed as many as she could then made her escape and ascended to her new form, Morathi-Khaine. Finally, her beautiful Aelven form was her true self, and her serpentine form had become a semi-autonomous creature, acting as an fearsome guardian for the woman who was no longer an oracle, but a goddess. If any of the members of the Cult of Khaine had objections, they dared not speak up before their new queen.

Morathi knew she had to act fast after her ascension. She had already betrayed Sigmar once and it would not be long before he prepared his counter-attack. Morathi prepared an invasion of the Free City of Anvilguard long in advance, such was her web of lies and deceit. Aelven agents were placed within the city long before, so that they could become high ranking members of the bureaucracy. When Morathi summoned her forces to attack the city of Anvilguard, they were unprepared as the city guard did not rally, and the forces were able to walk in with relatively little resistance. Morathi declared the city with a new Aelf name, Har Kurron, the “City of Scales”.

Morathi killed most of the non-aelf residence of the city. A few pockets of resistance hold out, but currently it seems like a lost cause. In order to bar Sigmar from knowing what had happened, Morathi captured all the city’s Stormcast warriors instead of killing them. Unable to return to their patron, Sigmar would be delayed in being able to mount an effective counter-attack against Har Kurron. Morathi had always had a tenuous connection with Sigmar and the other Aelven gods. Their shared hatred of Chaos and Nagash kept them aligned to a common cause, but the strength of those bonds has finally given out. Morathi has now declared open defiance to Sigmar, and with her newfound power there is no telling what danger she could unleash.

The Witch Aelves started as a smaller series of models within the Dark Elves, before Age of Sigmar broke them into their own faction. The story of the Daughters of Khaine is in many ways, more the story of Morathi. While far from innocent, the Daughters of Khaine have been a tool for Morathi’s vengeance and ascension to godhood. It seems now that her conquest has only just started and the fractured armies of Order are now caught flat-footed and will need to fight yet another front on their constant war against the forces of Chaos and the Grand Necromancer. There is no telling where Morathi will go next in her quest to dominate the Mortal Realms.