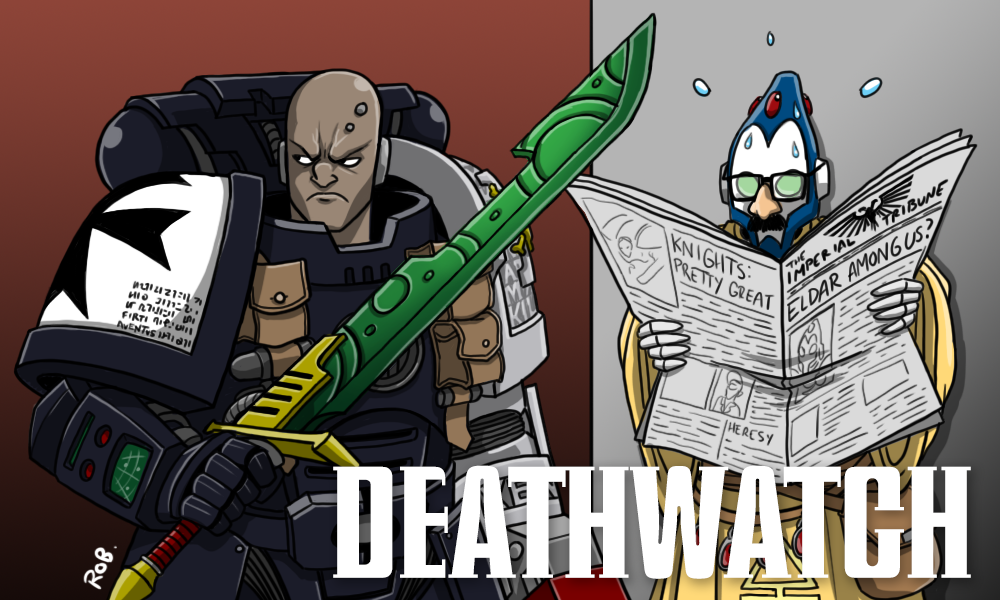 Games Workshop silently dropped a few major FAQs today, with big changes for Deathwatch, Space Wolves, and Imperial Armour: Compendium. As always, we’ve got a full list of the changes and how they affect your games.

We were absolutely floored by the length of the Deathwatch FAQ; there’s a lot in here, from minor typo adjustments to a few major functional changes to some inexplicable points adjustments. On the whole, this represents a series of small improvements plus a few necessary tweaks. If you were playing Deathwatch before, your lists aren’t going to be seismically impacted by this, but you may take more frag cannons and non-storm bolters in your veteran squads and Proteus kill teams. Still, there are a lot of changes to cover here and while they aren’t necessarily going to shift your overall strategy too much, they are significant, particularly because of a number of points changes.

Deathwatch Veterans saw a few major adjustments, both in terms of points and their options. Their PL has been reduced to 8 and 16 instead of 9 and 18 based on squad size, making them a little easier to place in Strategic Reserves if that’s what you’re going for. In general “typo adjustments” news, they’ve lost the Mixed Unit ability which they never needed, and most importantly changed every reference from “Veteran” to “Deathwatch Veteran” in case anyone was confused about who they worked for.

Terminators also had a few tweaks, moving from PL 9/18 to 10/20 but with no change in points costs. This would theoretically up the cost of putting them in Strategic Reserves, but they can’t go in SR anyways since they can teleport. The big changes here are for their wargear, specifically:

Veteran Bikers received a few changes as well. The wording was changed so that a Veteran Attack Bike is treated as different from the Veteran Bikers in terms of PL. If the unit has 4-5 Veteran Biker models it’s now PL 10, and if it has a Veteran Attack BIke it’s +2 PL. Also the stalker-pattern boltgun is now 5 points instead of 3, meaning that the same gun that got cheaper for Deathwatch Veterans is also more expensive if they’re on a bike.

Other Significant Changes and Clarifications

One of the big surprises with this FAQ were points changes, which we rarely see in FAQs or outside of the annual Chapter Approved Points update. The most important parts of this are the adjustments to kill team specialisms, which have all gotten significantly cheaper. The biggest winner here is the Aquila specialism, which dropped a full 10 points and lets you pick an additional battlefield role for re-rolling wound rolls against. Overall it makes taking a specialism for your kill team much more attractive. 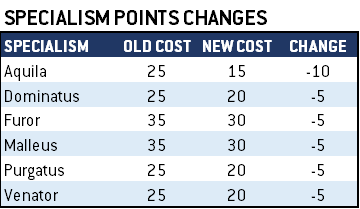 There were minor changes in points for several characters and wargear. A few units didn’t change their points, but did change their PL. This only really matters in competitive play for Strategic Reserves purposes.

As always, if you have any questions or feedback, drop us a note in the comments below or email us at contact@goonhammer.com.