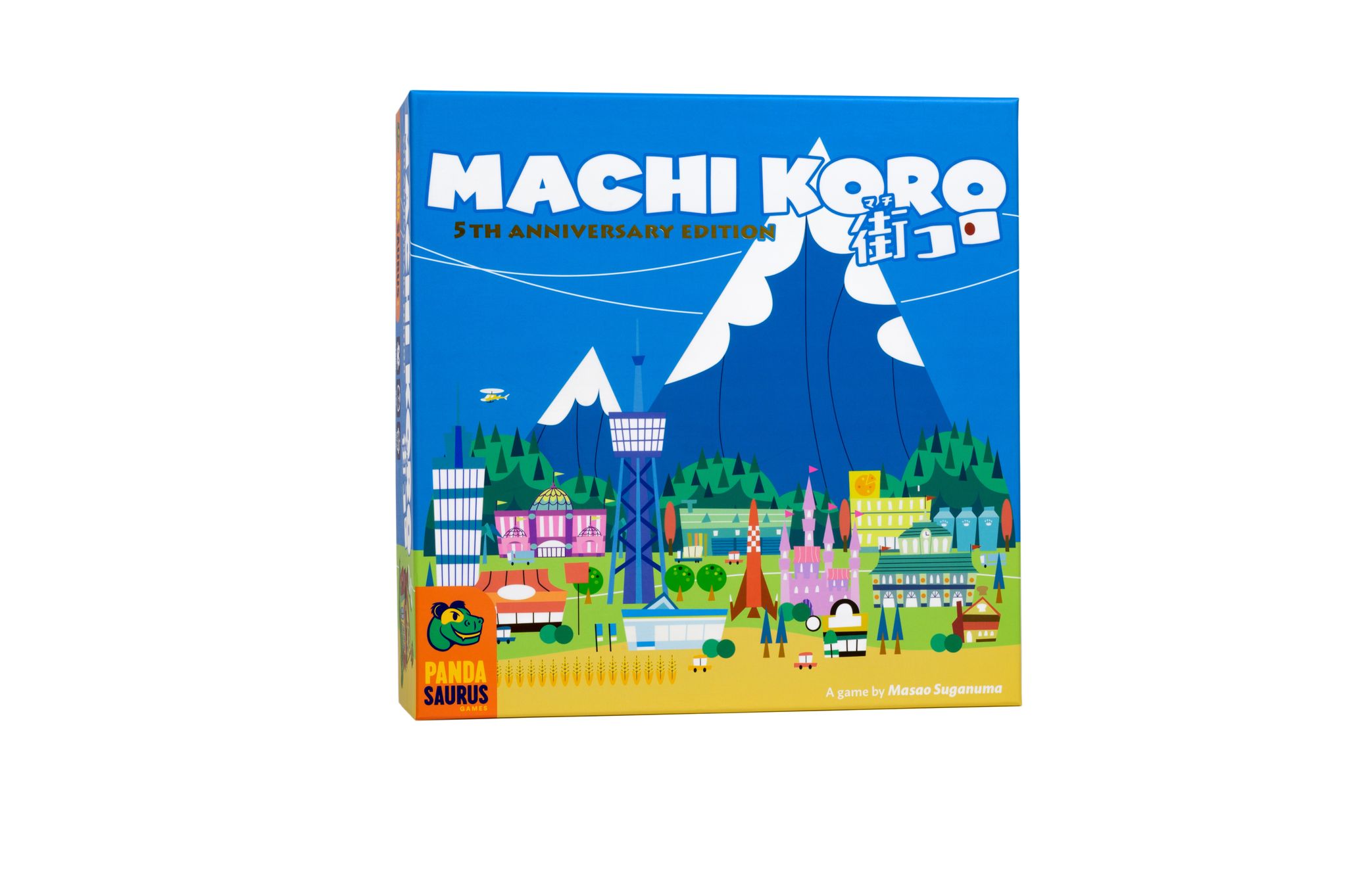 It’s generally a good sign when a boardgame gets a reprint, and an even better one when it gets a nicer, higher quality reprint and revised edition. Machi Koro’s anniversary edition gives it this accolade, and overall it’s well deserved. This is an absurdly simple yet cleverly compelling machine builder, that doesn’t overstay its welcome and is a fantastic entrypoint for people new to boardgames and children. I’m even tempted to call it a “family favourite” which is certainly true for our family, as it’s the game we’re now in the habit of taking down from the shelf to play whenever we want something fast but satisfying to do.

Congratulations on your election, you are now the mayor of Machi Koro

The goal of this cheerful game is simply to build your version of the city of Machi Koro as its mayor, and complete the construction of landmarks that will put your little conurbation on the map. To do that you’ll need money, and you earn money from other structures you’ll purchase as your town slowly grows.

Each building you pay for and construct has an effect that activates on a certain number on the die. Sometimes those effects will only go off when you roll it, but others will kick in when another player rolls that number. Typically it’ll just earn you a little money from the bank, but other times you can end up taking money from other players or swapping your buildings for theirs. To begin with you’ll all be rolling just one die, but you’ll soon unlock the chance to roll one or two, and more impressive buildings that activate on a 7+ can really dominate the second half of the game.

Machi Koro also rewards you to some extent for specialising – if you build a lot of ranches and then invest in cheese factories, you’ll be rewarded according to how many you have when you roll the right numbers. If you buy your landmarks in a certain order and invest in stores and cafes, you’ll get a big bump to your profits. The downside is that the more you specialise, the more times there are when the die or dice get rolled, and you don’t get anything because you’re not covering that number.

The result is simple, easy to learn and yet presents a pleasing problem. Do you invest more heavily in one area and gamble on those numbers coming up? Or do you spread your bets, get less back each time, but hopefully keep a constant trickle of money that eventually wins you the game.

This core mechanic of rolling the dice and seeing if the numbers come up how you want is the absolute heart of the game. One huge advantage is that it keeps everyone invested in everyone’s turns – any roll of the dice could earn you money. It also pushes some of those same buttons that kick in when you’re playing gambling games – you shake the dice and roll them and then… jackpot! That buzz is absolutely great, and when your properties pay off it can feel awesome.

Unfortunately it has the same buzzkill downside that gambling does – if you end up on a losing streak, it doesn’t feel like there’s much you can do. It’s not that hard to just misjudge what you’ve built and then a string of unlucky rolls leave you penniless and unable to build anything to up your chances of success and why is no one rolling a 9 my God someone roll a 9 already. I didn’t mind this too much, but my son (aged 7) found this absolutely crushing. He knew he was doing the right things, or at least not too badly the wrong things, but sometimes the dice just didn’t fall how he wanted.

And that’s really the central flaw of the game as much as it is the major success. It’s a gambling game, with all the good and bad that comes with (except for the potential loss of real money, at least until you up the stakes when the kids have gone to bed).

There’s also an irritating amount of limitation to the game, at least in the core box set which we played with. There are only so many fruitful combinations. While the alternative play styles mix things up a bit, once you’ve gotten to grips with your furniture factories and markets and such, there’s not too much left to think about. There’s just not a broad mix of cards in the game. I’m told that the expansions (boxed together now in an anniversary version) add a lot to this, but I never found myself really motivated to shell out for it. It was hard to imagine that it would dramatically extend the lifespan of the game in this direction.

[Raf’s Note: The expansions do mix the formula up quite a bit. In addition to adding new cards and increasing the interactions, you can also switch from “every card is available at the outset” to dealing cards out of the deck. Strategy changes as you can’t guarantee you can build stacks of synergy or even that you’ll see your favorite cards. However, “buy the expansion to solve this issue” is not advice I generally like to give. If you enjoy the game, the expansions are great additions, but if you don’t enjoy the base they aren’t going to dramatically change things for you.]

Also, and this is a petty gripe, the theme of the game is delightful but annoyingly confusing. So, I’m the mayor of Machi Koro, that’s great, I get that. So who are these other people? Are we… competitive mayors? Is that a thing in Japan I just don’t know about? Are we managing alternate reality versions of Machi Koro? It’s silly because it’s such an easy fix – you’re not all the mayor of Machi Koro, you’re the mayors of neighbouring towns. You could even have a step where you name your own town, my son would have enjoyed that immensely though losing another game to Butt City would probably have gotten old.

[Raf’s Note: Machi Koro Legacy does allow for this. In Legacy, players will make lasting and permanent changes to their towns while exploring a narrative little map. Unfortunately, despite my love of legacy games in general, this one failed to light a spark. The narrative drips don’t thanks things up fast enough and the exploration wasn’t compelling enough to keep us coming back. As a Legacy experience for younger kids however, it would work great.]

It’s also, ultimately, not that difficult a puzzle. There are some relatively strong paths to victory, and though you can end up losing pursuing them, the tactic of having broad investment early on then aggressively specialising later seems to be the best approach overall. It’s not got that much of a lifespan for those of us who play probably too many games.

But then, it’s not really for us. For my money this is a fantastic opener – a game that you can play with almost anyone, and they’ll have fun the first couple of times. It’ll definitely stay in my collection because pretty much regardless of who is up for a game if they’ve not played it before I know they’ll likely get a kick out of it. It’s a game I wouldn’t baulk at teaching to my parents, or to a couple of my son’s friends, and it’s one that’s cheerful and accessible enough I can’t imagine it upsetting or putting anyone off really. That’s a huge deal, in my household at least, and so because of that I tentatively recommend Machi Koro. Know what it is you’re buying (a fun, charming little gambling game with limited depth) and don’t pick it up if it doesn’t suit you.