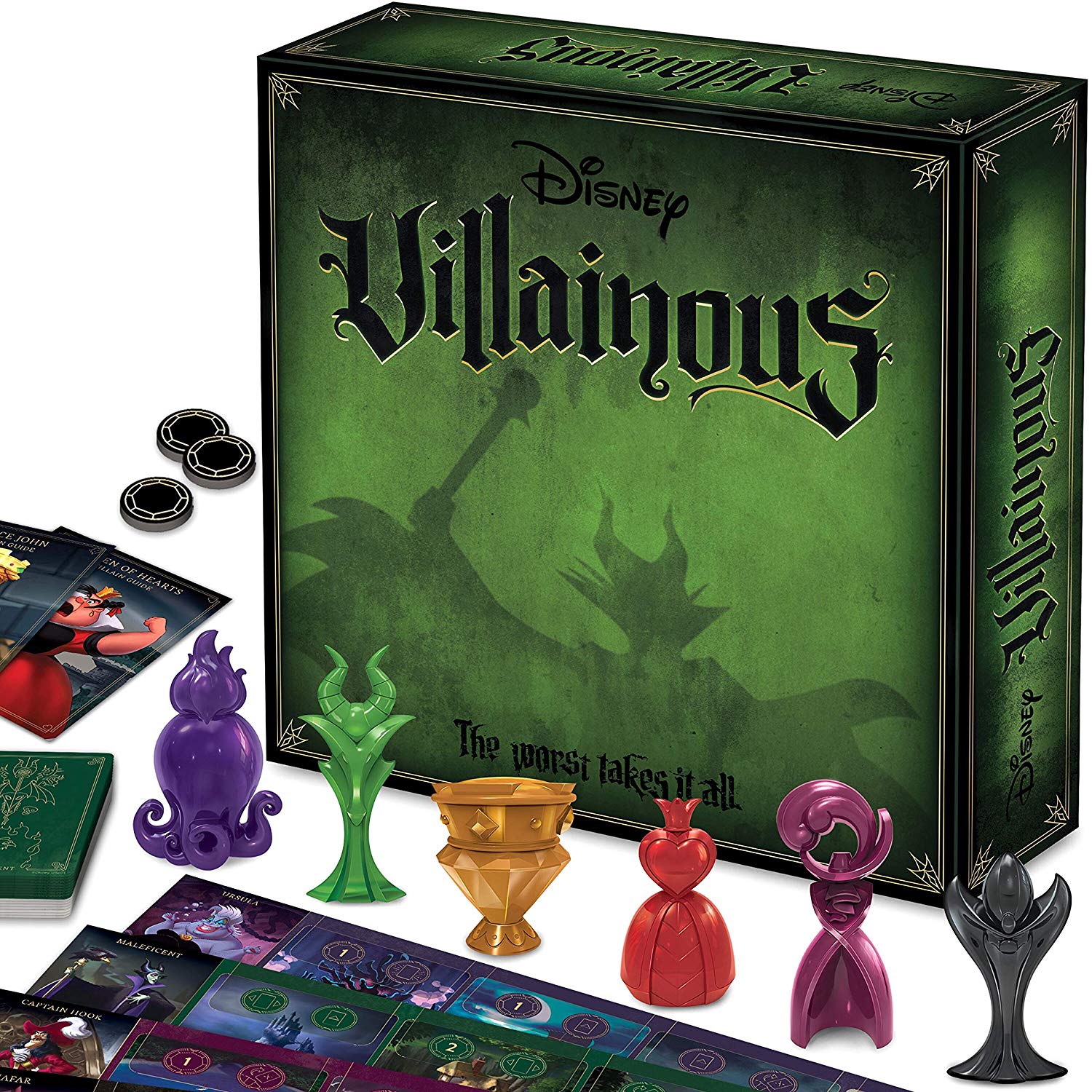 A two or more player competitive game by Ravensburger, probably more famous for their puzzles than games, Disney Villainous flips the traditional script. You play not as the dashing hero or brave heroine striking down the evil fiend, but rather as the fiend themselves, hell-bent on rewriting Disney movie history. Every player picks a villain and in some ways almost plays their own game, with each villain playing by an entirely different set of rules with their own objectives, board, and other pieces. This allows for an incredible amount of variation between villains, but does mean that you can’t really transfer practice with one villain to another.

The core box contains pieces and rules for the Queen of Hearts from Alice in Wonderland, Maleficent from Sleeping Beauty, Prince John (the lion version) from Robin Hood, Captain Hook from Peter Pan, and Jafar from Aladdin. We’ll use Jafar as the ongoing example for this review.

“If I lose my temper, you lose your head! Understand?”

Each villain has a unique board (or ‘Realm’) which sets out the actions you can perform. These include gaining Power (the game’s currency), activating items or allies, playing cards, or ‘Vanquishing’ heroes that annoying rivals may have played against you. On your turn, you move your villain to various parts of your realm, each of which has a range of differing actions you can perform. To avoid players just spamming the same action you can never go to the same area two turns in a row. This means you have to plan out a few turns in advance. Really need to gain Power, but you only have one space in your Realm that lets you do so? Better make sure you have a plan for the turns you can’t spend there. Jafar’s Realm contains the Sultan’s Palace, Streets of Agrabah, the Oasis, as well as the Cave of Wonders, which starts the game inaccessible until certain conditions are met. Each villain also comes with a little rules sheet describing their own unique rules, and a general rules summary card, which very helpfully includes a description of how every other villain functions; there’s nothing worse than only remembering Prince John will win on his next turn just before it happens!

Your villains also all have their own unique win condition tied to their movie narrative, which range from the simple (Prince John needs to start his turn with 20 Power to represent his greed and high taxation demands) to the more complex. Sticking with our example, Jafar needs to have the Magic Lamp (an item card) at the Sultan’s Palace (a location in his Realm) while the Genie is under his control (a Hero affected by an Effect card, basically a magic spell). This may sound like some villains have an advantage over others, and it’s true, to an extent; Jafar’s plans could be delayed for a few turns by an inconveniently placed Hero, while Ursula may have an easier time ensuring that King Triton’s Trident and Crown are at the Ursula’s Lair location, but in our experiences we’ve found these to be more excellent moments to shake your fist at the sky and curse your enemies rather than real issues that lessen the fun of the game.

[Editor’s Note: In fact, seeing heroes grabbing the lamp out of your hands, back and forth in a madcap scramble to the end evokes the end of the movie in a fantastic way!]

“Forgive me a cruel chuckle! Hehehehehe…”

The main inter-player interaction for the game comes in the form of Fate cards, which are various negatives you can bestow upon other villains. If you choose part of your lair that allows you to play a Fate card, you pick a player and draw two Fate cards from their Fate deck. This plays into the conceit that every villain is operating in their own unique world; no shared universe like Marvel here! For Jafar, this could be heroes like the Sultan or Aladdin penalizing Jafar or stealing items you may have accumulated, various different ways to improve the Heroes, or flat out debuffs, like taking away some of his Power.

Heroes are probably the most tactical and interesting Fate cards: when played, they’re placed on top of a space in the villain’s Realm, locking off actions that now cannot be activated until that hero is defeated. Each hero has a certain strength, and you’ll need to build up a stockpile of your own Allies (such as Palace Guards or Iago) to strike them down. Of course, these minions don’t survive the encounter, but what do you care? You’re the villain, baby!

Villainous isn’t cooperative, but I’m almost hesitant to call it competitive. Sure, you’re looking to reign as supreme villain at the end of the day, but in some weird way Ravensburger has managed to develop a game where each player is looking to defeat the game, rather than each other. The game design works really well in that it encourages each player to be invested in their own little story. Even when Fate cards get played, I’m far less upset at the player trying to foil my grand designs than I am at Abu the monkey nicking my items and mocking me from behind Carpet. Even heroes, probably the harshest of the Fate cards, don’t put a player remotely out of the game. Of course, there’s always the possibility of multiple players ganging up on someone, but this really isn’t the kind of game to encourage that; you’re playing to defeat the good guy, not make other players feel sad! The game doubles down on this vibe by stipulating that, in 5 or more player games a player cannot be the victim of a Fate action twice in a row. This means that if someone is runaway lead you might have to eat a Fate action to allow the next player to Fate the leader, but this is more of a tactical feature than any sort of bug. If your players are worried about being ‘bullied’ by Fate actions, try bringing in the Fate Token in smaller games – we’ve tried it in 4 player games and it works wonders, but I’d be cautious about trying it in a 3 player game.

A tale as old as time…

Villainous could have gone the easy route for it’s game tokens. It could have gone with meeples, or even just counters, like some other games. Instead, each villain is represented with all the flair and panache they deserve with stylised representations. There are a few misses in here (Scar is… odd, and Hades’ piece should probably be avoided around juvenile children if you don’t want any distractions), but on the whole they’re pretty neat ways of seeing villains in design aesthetics that haven’t really been explored before

The art on the front of the cards is largely drawn from the movies, while the backs and rest of the game pieces are covered in beautiful stylised line art that is evocative enough to look good if it was a painting hanging on my wall. Each villain has their own design space, and I understand they’re all drawn by different artists, so you get a new range of beautiful art to look at each time you play. Power tokens are fairly generic geometric symbols on cardboard tokens, but the plastic token holder, called here a Cauldron, is designed as a sort of swirling mass of energy or rock, rather than a simple plastic bowl. If I’ve been too subtle so far, every element of Disney Villainous is designed to draw you deeper into the world of your villain. You don’t just feel like you’re playing a game, you feel like you’re entering a world each and every time you sit down to play.

These expansions are almost more like downloadable content than your traditional expansion; none of them changes how the game is played at a basic level. Rather, each contains a range of new villains to slot into your game. The expansions give you options, and they all seem to be fairly balanced in our experience. This isn’t a pay to win where Mother Gothel suddenly comes in and slams down the poor innocent early villains!

Because each villain plays completely differently to every other, there’s really no downside to letting players pick from whichever expansion they choose instead of making everyone pick from the same box. While each of the four boxes includes a pretty neat villain, seeing a player’s eyes light up when you say they get to play their one true villain from their childhood favourite is a real treat. Even better, this is an excellent way to introduce new players to gaming; getting people invested in their faction or player character is a lot easier when you let them pick their own villain, rather than just having to say “okay, so you’re settling this island of Catan, right…”.

Disney has always been good at tugging on heartstrings, and Villainous does a superb job in tying together theme, emotion and mechanics in a bow that really makes you care about your story while never feeling personally attacked by another player. The gameplay is tight, efficient, and you never feel like you’ve wasted your turn or have nothing to do. Sure, the game relies in part on nostalgia for childhood gems, but this is tied up in a game so well balanced and designed you can probably play it with blank tokens and still have a pretty good time.

Sadly, most movie tie-in board games tend to be quick cash grabs more interested in a short sell than telling a story or a fun evening around the table. I will be the first to admit that I put Disney Villainous in this category when it was launched in August 2019. I will also be the first to admit that I was very, very wrong to do so. Disney Villainous is one of the most entertaining movie tie-in games I’ve seen in quite some time, and is now an absolute staple in our household.