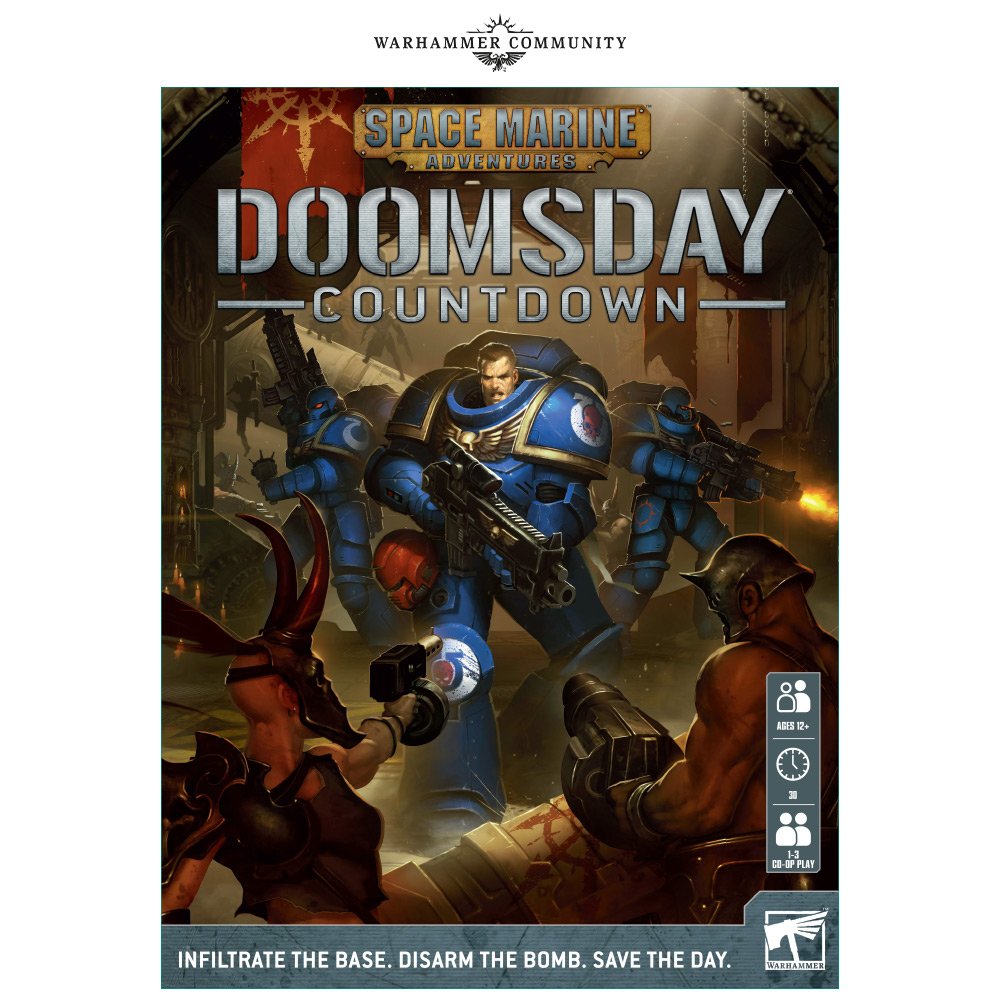 Launching alongside Fire Team is another Space Marine themed board game aimed at a more casual crowd. While Fire Team is a competitive game aimed at streamlining the feel of Kill Team for the non-wargaming crowd, Doomsday feels like a simplified Warhammer Quest game like Blackstone Fortress. It’s co-operative (with no competitive component), simple and is resolved within a half hour or so. Does it succeed at this? Is it worth bringing to your next game night? Let’s take a look.

The presentation is strong as a board game. As is usual for these casual games, the minis included are just repurposed minis from other Warhammer 40k products. In this case you get the three Easy Build Primaris Intercessors from 8th edition’s Painting kit and a set of 7 cultists from the Servants of the Abyss Expansion to Blackstone Fortress (sans the big guy). So as expected nothing new here and not really worth grabbing for the plastic. Other than that, you have tokens and board hexes to push out, some basic white and black d6s and a d20 for a counter. It all fits neatly into a plastic tray. It’s a small thing but I so rarely see board games with plastic trays that had thought put into accommodating every piece that came with the game.

My only grievance with the contents, and it is a small one, is that the d20 included is of the RPG variety where numbers are on opposite faces (1 and 20, 2 and 19 etc) instead of the spindown style used for games like Magic the Gathering where the next number is adjacent. It makes using it as a counter slightly more annoying than it needs to be but not an insurmountable hurdle to deal with.

The Player Characters with 2 Wargear cards each

Setup for the game is fairly simple. Each player takes a Space Marine with a unique ability. If there are 2 players one takes control of two of them while in solo play you simply control all 3. Each player is randomly dealt 2 Wargear cards that grant one time use abilities like the ability to add +1 to hit rolls or heal a wound. Finally the board is set up. A center hex is placed allowing you to branch off into 6 directions, though 3 additional starting hexes are always placed to get you started.  Then a player shuffles up all the hexes and plants them until every the hexes are down and connected into a randomly generated maze. The defuse code is placed on the specifically marked hex and finally, cultists are placed on one of three “spawn points”. Set the counter to 20 and off to the races you go.

The gameplay is very simple and works both to the games benefit and detriment. Each turn the players go first, and each Marine gets 3 actions (though there many ways to get free actions). Generally these boil down to move or shoot, but you can also use one of your actions to seal up one of the spawn points for chaos cultists (so no more can come in), pick up the defuse code and defuse the bomb. After all 3 players have finished their actions the cultists go. Cultists actions are resolved by drawing a card and then having every cultist resolve it to the best of their ability. Usually it’s something like move twice, move and shoot or even a sneaky one where planted explosives go off, potentially harming all 3 marines regardless of location. Once that’s done, any dead cultists are spawned (if possible) and the clock ticks down by 1.

The game is over once all the Marines are dead, or the primary objectives are completed. These are:

And…that’s it! I’ll be frank, co-op games are hard to do well. Designing a system that can handle the “enemy AI” that presents a challenge but isn’t crushingly unfair is a very difficult balance and the game really doesn’t succeed here. Players (and the enemies) are going to be at the mercy of the map you generated and sometimes that’s just going to create situations that force the enemy to spread out more, or where they are on the way to the objective anyway. The co-op aspect is wasted here. The game is more like a solitaire puzzle that can be plotted out from the start and then the plan is followed through on. You always want to have one player go for the codes (2 if there might be resistance on the way), then defuse the bomb. If there are any cultist spawn points left, plug ’em up and get out of there.

There isn’t enough randomness that you can honestly fail very often once the plan is agreed upon. Space Marines hit on a 3+ while cultists hit you on a 5+. There is a heavy weapon (which hits on a 4+), a grenade launcher (which can hit everyone in a tile) and a leader (who’s a bit tougher at 2 wounds) but they don’t present enough of a threat to meaningfully make the players want to avoid them. The games lack of randomness could be forgiven if the actual gameplay wasn’t so simple. There just aren’t enough tactical options to hold the interest of people looking for a complex experience and not nearly enough randomness to make you constantly need to re-evaluate your strategy. A 20-turn counter is also far too generous, 15 might be getting there but with 20 you probably will have no issue getting everything done in about half that time, even if the objectives are on opposite sides of the map. The book does come with a series of Achievements and “Penances”, optional difficulty modifiers to make the game more difficult which could offer some replay once you understand the game. To get any sort of challenge from this they likely will be just about mandatory.

An example board generated randomly using the games rules

For most Warhammer Players, I’d just skip this. It’s too simple, and over too quickly to offer any serious enjoyment. Gameplay will likely boil down to one person discussing the plan and the other players agreeing and just acting on that plan, making it basically a solo experience. However, I do acknowledge that the hardcore hams player is not the target market here. Is it any good for casual players who aren’t 40k players? Maybe. Although listed for ages 12+, the games probably better suited for slightly younger, maybe around 8+ or so. It would be a decent game to play with kids who don’t necessarily know how to plan out an entire combat operation from the start and just want to roll dice to shoot the bad men. Since it’s co-op adults wouldn’t need to sandbag in order to make the younger set feel like they’re accomplishing something. For older folks, there’s just plain better “Casual” co-op board games like Pandemic. The only redeeming factor of this is how quickly it moves, at under a half hour you can be in and out and get on with your day, and that can be a strength too.

If you have any questions or comments leave them below or email us at contact@goonhammer.com. A review copy of Doomsday was provided by Games Workshop.