Draw and Laugh Through the Best Party Game of the Year: Tattoo Stories – Boardhammer 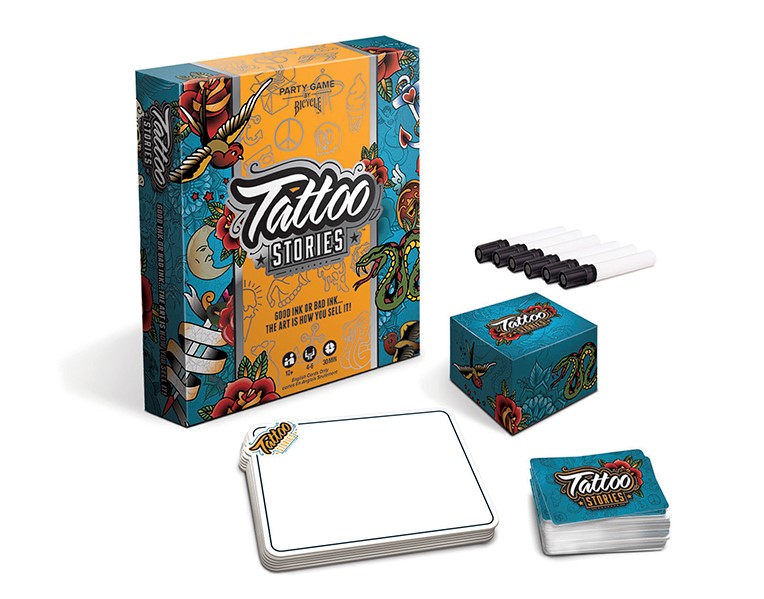 Ever since Apples to Apples exploded onto the party game scene, there has been a spat of games that follow a familiar formula. One Lead person plays a Category (broadly speaking) Card and the rest play one or more Word Association cards from their hand in an attempt to wow the Lead player by making them laugh a lot. Whether its the drolly offensive Cards Against Humanity or the improv fun of Snake Oil and Funemployed, there are hundreds of these “You-Play-I-Choose” titles you can toss into your gaming bag. Tattoo Stories just might eclipse them all, like the cover-up you so desperately need to erase the only memory of Spring Break 2006 you’ve got left.

Tattoo Stories—designed by Eric Slauson and published by Bicycle Cards—trades word association and improv for white boards and dry erase markers. Each turn one player is the Customer and the other players are Artists competing to win the Customer’s business. To do so they’ll have to work all of the Customer’s tattoo themes into a single cohesive piece and then explain why their art is the one the Customer should want to have inked permanently on their skin.

These themes come out of a large deck of cards, similar to every other title in this genre. However, there is a key difference to this step that showcases smart social design and makes Tattoo Stories a bit friendly than its competitors. Like the rest, after the Artists have drawn and pitched their tattoos the Customer will choose their favorite and dole out the theme cards as points. Unlike the rest, the Artist has multiple cards and can dole them out piecemeal to the Artists who incorporated each element the most creatively. This may not seem like a significant change, but in practice it eliminates a number of issues with the genre.

It can be common for a single player to start running away with a game of Apples to Apples, creating a situation where Lead players simply avoid declaring that player the winner out of a desire to not see the game end. Even if they aren’t being deliberate, there is a social pressure that can make players want to spread the wealth around a little bit—consciously or subconsciously. When games are about skill it can be easy to chalk up a loss to bad strategic play and move on, but when the game is about making your pals laugh a loss can cut a bit deeper.

Tattoo Stories alleviates this by having the Customer player draw ten cards and choose five to play. One round might have “Robot, Dreadlocks, Sexy, Shield, and Historical Figure” while another features “Rose, Dragon, America, Brand, and Meaningful Number”. When it’s time to hand out points, each card is awarded separately. Sure, Sarah may be the best artist in the group but it’s unlikely that she’s going to incorporate every element in the most creative or hilarious way every time. Five elements makes it far more likely that everyone will get a chance to shine even in the same round; this goes a long way to mitigating the social feel-bads that can come from other games in this genre.

As anyone who guilt-watches the horribly great Ink Master can attest, it is not easy to work 5 disparate elements into a single cohesive piece of art which is why Tattoo Stories also ensures there is some good table talk. Artists are encouraged to ask questions of the Customer to best design a dream tattoo and also must pitch their art following the reveal. The rule that says that nothing can be erased once drawn ensures that the Artists are in a constant state of creative scrambling and makes the pitch section that much funnier.

As a Customer, the opportunity to get in character can add another layer to the fun. The rules don’t require it but we quickly adopted demanding Characters on our turns as Customers. From the frustratingly vague Sorority Sister who wants a dream tattoo with her bestie to the Biker demanding the perfect Mom-morial chest piece, Tattoo Stories encourages extra layers of emergent play that I haven’t seen out of this genre.

Whether you have one or not, you probably know someone with tattoos and can easily conjure up good experiences and horror stories. Unlike Apples to Apples which is abstract word association, or Funemployed which has the potential to punch-down with its employment related humor, Tattoo Stories lets you celebrate good art and bad art in equal measure. The multi-card play spreads the love, and there’s little concern about being good or bad at drawing; very very few people are going to create 3-minute works of art using dry erase markers.

Party Games are a hard sell right now, but this one is worth picking up. It could be played at outdoor/socially-distanced gatherings and is also Zoom/Virtual Table friendly. We’ve played it straight, settled ties with Lightning Rounds, and thrown out extra themes mid-draw as we’ve gone round the table. There’s even a gauntlet challenge that’s been thrown down; should anyone win all 5 cards at once the Artist has to get a real tattoo of the drawing. Since Tattoo Stories all but eliminates my frustrations with this genre, and is one we’ll be grabbing off the shelf multiple times, I’m considering this an eventuality .