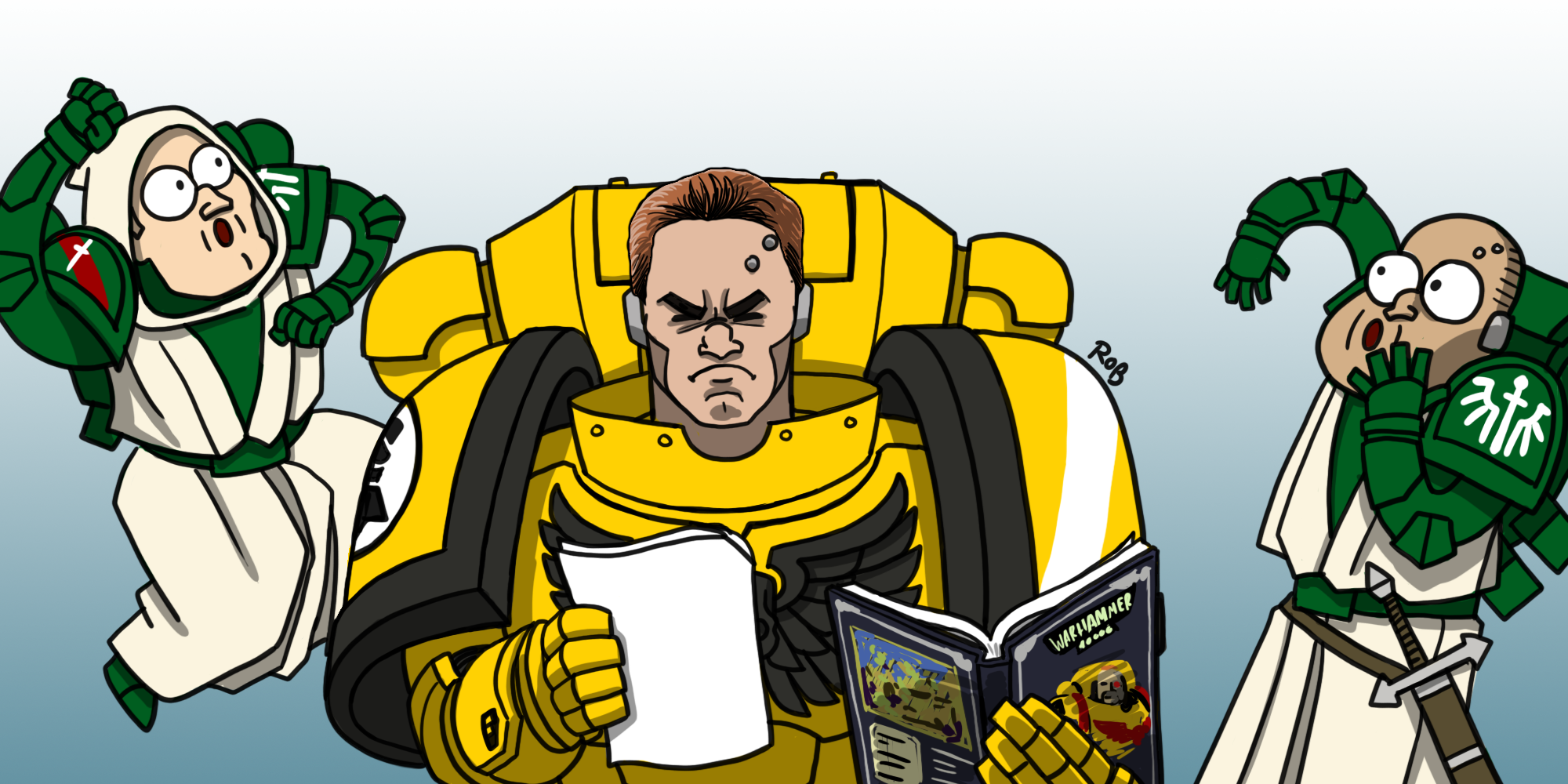 Monday’s FAQ change to the Imperial Fists particularly bothers me, and while I didn’t want to editorialize overmuch in our hot take, I don’t want it to slide by un-commented on. It has some serious balance implications, but that’s not my problem with it. We all know and expect things to get adjusted and rebalanced. While I’m not certain at this moment that the change was needed for balance, that’s really whatever. My problem with the change is how it’s a fundamental shift to how the chapter works, and how it invalidates previous units. I’m worried that while a shift from good to bad by a unit or entire army is something that’ll be absorbed by players as long as they’re still doing the same thing, this change is a complete shift in what units can do. It’s going to hit newer and more casual players a lot harder – people who don’t have the depth of collection to just put their units back on the shelf and run something else, whether that’s changing to different units or even playing an entirely different army.

If you missed the FAQ, the key change I’m talking about is that the Imperial Fists ‘superdoctrine’ Legacy of Dorn changed from +1 damage on heavy weapons when targeting a vehicle in Devastator Doctrine to requiring that heavy weapon to be at least strength 7. Previously, lacking the strength limitation meant it synergized nicely with exploding 6s on bolt weapons to promote bringing heavy bolters, and worked well with the Primaris range’s love of onslaught gatling cannons. Being able to take those middle-weight weapons and turn them into reasonably effective tank killers through weight of fire (and adding stratagems such as Tank Hunters and Seismic Devastation back when it was still current) gave the Fists a very unique playstyle and army build compared to other chapters. This isn’t to say there were no balance issues – being able to do that every single turn, and being able to do it with Thunderfire Cannons and various types of Whirlwinds that could be parked in nearly complete safety was oppressive. I’m not here advocating that we need to go back to that.

The other change that hit running a Fists army, also significant, was the mandatory doctrine rotation. While yes, this change was a while ago, it was almost immediately followed by COVID-19, so we didn’t get much time seeing it play out. It wasn’t the end of the world, being a needed hit to the raw power of the doctrine (and to try to get Iron Hands in line), and we could still do quite a bit on that first turn. The new Adaptive Strategy stratagem in the new 9th edition codex was looking great to bring that back a bit – while it won’t let me get multiple turns out of my doctrine on Centurions or the new Gladiator Reaper (I was so so excited for this tank), I could still use it on a Redemptor, or Devastator squad of heavy bolters, or squad of Heavy Intercessors. I had options, and it was a good balance point between a permanent bonus to let an Imperial Fists army flatten vehicles and only getting it on the turn where my opponent is most likely to be able to hide from them.

The new change takes the type of army we’ve been building ever since the supplement released and throws it right out. All those medium weapons function identically to any other chapter, so you’re not actually getting anything for them being Imperial Fists any more – despite having spent time building and painting an army based around using those weapons. To actually get any use out of the Fists doctrine I need to go back to using high strength weapons, generally ones with many fewer shots and higher damage per shot, where my doctrine bonus matters a lot less. To double down on that, most units that have those weapons either have very few of them or aren’t Core – or both. In a vacuum, that’s fine; being able to stack buffs on a single unit with a bunch of lascannons would be problematic. In this case, it means actually making use of the doctrine is tough. You’ll get a couple shots out of it the first turn, and then very little subsequently. Unless, of course, you take Eradicators. High enough strength to get the doctrine bonus, as many as 16 shots in a unit, and they’re Core so you can push them back into Devastator on subsequent turns. Nothing else in the codex can do the same. It’s fine that Eradicators are good, but they’re good in every chapter, and let’s face it – no-one wants to see more of them on the table right now. While they’re pretty much the only way to actually make use of the doctrine, they’re not giving me anything unique that other chapters don’t have.

I come out of this confused about what GW actually wants my chapter to do. Almost all of the Chapter supplements on release had a distinct playstyle they encouraged (except Salamanders, which didn’t seem to fit the range available at the time, and Iron Hands, which encouraged you to be flat-out better at everything). I built an army based off the supplement, with volume of fire to fill in my antitank. It was something that was clearly distinct from any of the other chapters. Now, almost exactly a year later (my review of the supplement was written October 19th, 2019), I’m sitting here having had everything about that playstyle nerfed and removed.

GW assured us that the supplements aren’t being replaced, and none of the other supplements took this kind of hit, so I’m sitting here not sure what’s going on any more. Even at release it felt a bit like GW didn’t have a great handle on what they wanted Fists to do, and every change since only seems to confirm that. With no prospect of an updated supplement in the near future, it’s a weird position to be in.

It’s like I spent all this time in a video game to unlock a fancy sword, built a character around using swords, and then after I got it the sword was turned into a bow. Players need to have some trust that what they’re working on will stay at least sort of the same, especially in a game like this where building an army takes time and money. This FAQ breaks my trust that the designers won’t invalidate my time without even a message, just a substantial change out of the blue. Iron Hands might’ve been hit over and over with nerfs, but the army still did the same thing – an army you built at supplement release would still work after all the changes, just not as well. That’s not true at all for these Fist changes, and not being able to trust that army styles will stay similar hurts the faith the player has in GW.

The whole game (and business model) is based on faith between GW and the player. A single unit can take days to build, weeks to paint, and months or years to build up an entire army. There has to be trust that a unit is going to do the same thing in a few months as it does when a player purchases it, and that’s what GW’s thrown away here. Players will understand balance changes. Reduce the power of a unit or entire army, sure! But when you buy a unit to do anti-tank, it should still be doing anti-tank a few months later. With this change the units that a Fist player has spent the last year building no longer have the same functionality, and the army as a whole looks completely different. GW seems to generally understand this need – it’s the whole reason that they have a commitment to keeping rules updated for any model that they continue to sell, and it’s pretty rare for them to get rid of units entirely, a process that in the past has had a multi year gap between stopping selling something and stopping rules support.

Fists weren’t the only army to have been hit by this round of FAQs – while Dark Angels got some very cool stuff in the Index they just got, Space Wolves and Deathwatch definitely have some issues. Unlike Fists, however, those armies both have a complete supplement on the horizon. GW have told players that they’ll have their full rules by the end of the year. Fist players haven’t been told anything. The doctrine got effectively removed from most Fist armies in a single PDF, and there’s no sign of any sort of change or revamp on the horizon. Fists were already lacking in stratagems, traits, and relics, especially since a good part of their page space was devoted to stuff for Crimson Fists which the Imperial version has no way to access, so that doctrine was their main point of separation with other Marine armies – with it cut down like this there’s absolutely no reason to play Fists over any other type of Marines, and nothing in the foreseeable future for Fist players to hold out hope for (and we’re not all tournament players willing to jump around to different chapters as needed).

The only real hope is for GW to recognize what they’ve done here. This has sometimes happened before – the temporary Look Out Sir change hurt Harlequins (and a couple of other factions) in a completely outsized way that destroyed their ability to use their vehicles to screen characters – and so hopefully they’ll recognize that this change gets rid of a playstyle that Fist players have been building armies for in the same way. Until then, well, I want to play my Fists but I’m not sure how – and I’ll be thankful that I both have other armies and a deep enough collection that I can run as a different chapter, even if it’s a totally different play style than I’ve spent the last year building.