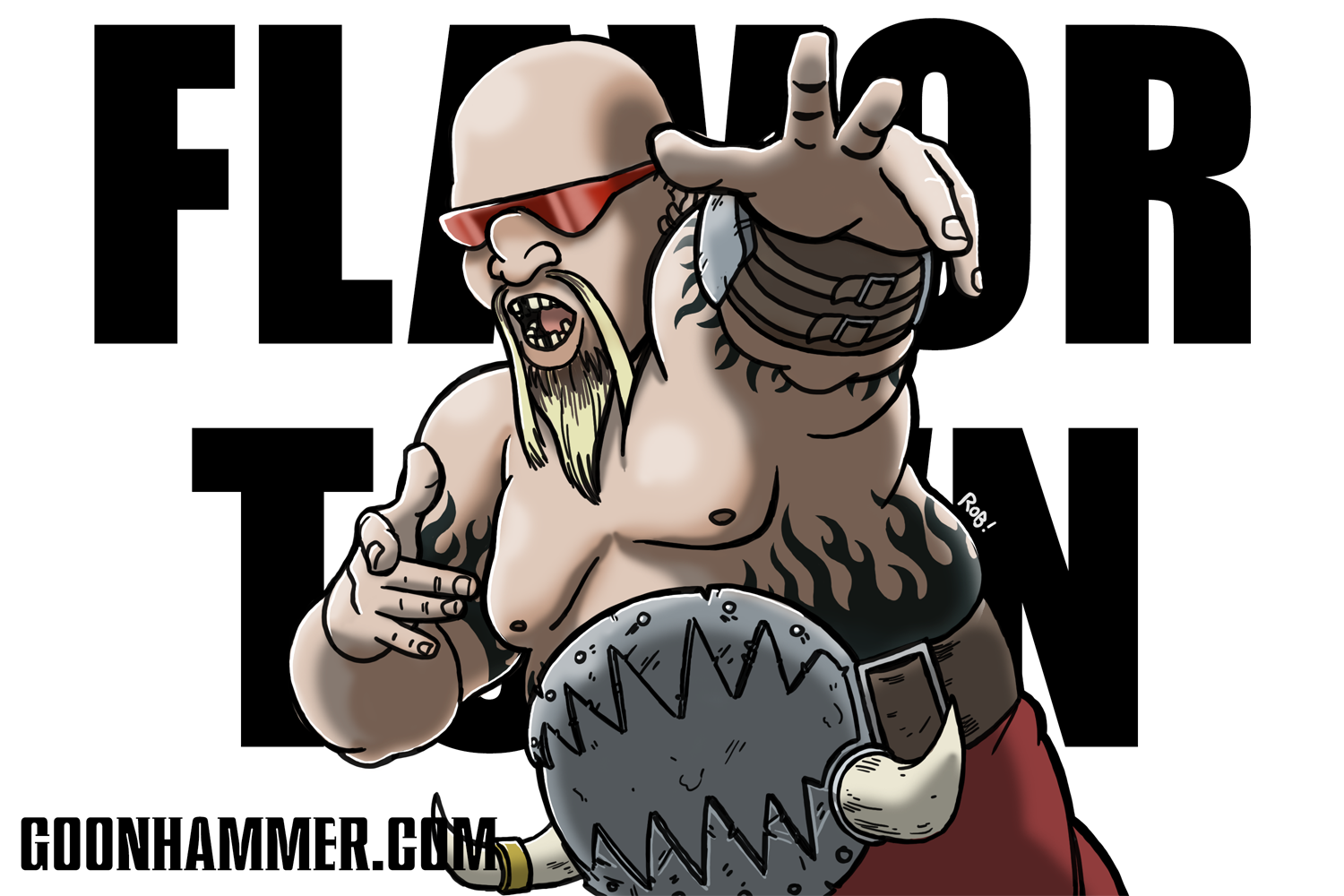 Connoisseurs of all things in the mortal realms, and I do mean all things. Ogors have an insatiable appetite that allows them to eat absolutely anything in the mortal realms from rocks, beasts to Stormcast lighting! They also are the vanguard army of The Everwinter, a constantly moving ice wall that covers everything it crosses in Ice, forever. The Ogors keep moving to stay ahead of it, pushing over and eating everyone in their path.

Ogors are a pretty good “mixed force” army on the table. They have some great melee infantry, Monsters, spells, prayers and even a fair bit of shooting which gives you a decent variety of gameplay to experience every phase of the game. They’re fairly straightforward to play and the high wound, low model count makes them forgiving for beginners to learn to play and paint. It’s worth mentioning that Beastclaw Raiders are one of the most economic armies to start in the game. With 3 Start Collectings and maybe another purchase or two you’ll have everything you’d ever need!

Competitively, the Mawtribes have sat pretty well in the middle. Not great, but not terrible either. The Monsters do some great damage and an effective alpha strike can mess up an opponent on the first turn that is impossible to recover from.

One of the armies most impacted by 3.0 rules changes, and both for good and bad reasons. First the good, your Beastclaw Raiders got even better thanks to Monstrous Rampages. They’re second to Sons of Behemat in terms of the ones who benefit the most from the change. You already do some seriously meaty impact hits on the charge and tend to field multiple mounts, so you can easily cause additional mortals, block Command Abilities and Titantic Duel other monsters all in the same turn.

The bad news is your Gutbusters now struggle more from coherency problems. All of them are on 40 mm bases and the new “Must be within 1″ of 2 models” problem hurts them real hard. This is particularly bad for you because while Stormcast may have a similar problem, many of their units start 5, where coherency isn’t an issue. Gutbuster units range from starting at 2-4 so if you reinforce them, coherency becomes a problem.

On that note, the new reinforcement rules caused unit sizes to change. Lets use Gluttons as an example. Previously, they started at 3 and could cap out at 12. Due to the new 3rd edition rules, they would only max out at 9. Games Workshop changed their starting size to 6, so you can actually get more than you used to, maxing out at 18, but you also have to pay more points and cant start with a smaller unit.

Other armies stole your Might Makes Right rule, but you still get the better version. Each model counting as 2 and a Monster counting as 10 is still going to outpace a lot of other armies except for true hordes or Sons of Behemat.

Leadbelchers are solid beneficiaries of Unleash Hell, even if it’s new nerfed form. It may not do Mortals on 6s, but it can punch a few holes in things that try and charge up without proper buffs.

Functionally, the Ogor Mawtribes are two separate armies that you can mix – or not – as you please. There are the Beastclaw Raiders, Ogors on giant Mounted Mammoth-like steeds, and the Gutbusters who take it on foot, plus a third category of Icebrow Hunter and its beasts. It’s worth looking at each group independently.

Frostlord on Stonehorn is a practically mandatory take for a leader and it was common to run 2-3 of them up until very recently when Thundertusks got a large decrease in cost. You’ll still take one or two as a leader regardless of subfaction just because of the sheer damage it does, once it gets into melee anyway. That can be all but guaranteed with their reroll charges command ability. The Frostlord on Thundertusk is generally considered not as good, but has had its cost reduced a fair bit, making it a potential pick if you need to fill in a few points. It has a few ranged attacks and tricks up its sleeve.

The Huskard on Thundertusk is another auto take for leaders Beastclaw lists, youmight even take two. Simply because it’s a priest, and a tough one at that. They come with a suite of their own spells, but the new prayers also work well since they’re tough enough to get in with Heal or Curse.

If you want to go all monsters, you can go with Stornhorn or Thundertusk Beastriders for Battleline with a Beastclaw general. They follow much the same pattern as their leader counterparts: Stornhorns are better in melee while Thunderstusks have some token ranged attacks. The cost is prohibitive enough on an all monster list that you’ll likely do 3 Stonehorns and stop there. Unless you choose to mix in Gutbusters.

The Butcher is going to be a mandatory take. It’s really your only wizard that can access Gut magic, the better spell lore. Spells like Ribcracker and Molten Entrails seriously up your damage potential against enemy units. Firebelly is your other wizard who has his own spell lore, which is unfortunately not as good. The martial Heroes are a bit more lacking without Frostlords. Tyrant is an ok choice but you might want to bring in at least one Frostlord instead.

Your boys on foot are well and varied. Gluttons are your bread and butter battleline. Cheap and can hold points but as stated above due to new coherency rules they struggle to get the damage output needed.

On the ranged front you do have some decent options. Leadbelchers do some decent damage both medium range and in melee while Ironblasters and Gnoblar Scraplauncher can hit targets further back.

There’s a third group of loosely affiliated units mostly surrounding the Icebrow Hunter and it’s named version Hrothgorn, one of the rare Warhammer Underworlds models to see decent use. Both are able to deep strike, giving some movement powers you otherwise lack. Hrothgorn gets to bring along his retinue and another frost saber letting you drop 6 objective grabbers worth on your opponent’s side and trap a piece of terrain to do D6 mortal wounds.

Speaking of Frost Sabres, they are exceedingly cheap for grabbing objectives, with an almost guaranteed charge when accompanied by an Icebrow Hunter. They likely won’t do a ton of damage but they can keep stuff tied up. They’re battleline if the Icebrow Hunter is a general too!

Finally, Icefall Yheetes are worth looking up. They share with Zombies the ability to pile in from 6″ away, an abundantly frustrating ability that lets you move into combat without needing to charge, even if they walk up to you. A bit expensive for the damage they’ll actually do, but they can pin an opponent down good.

You’ll need to decide if you like the Gutbusters, Beastclaw Raiders or a healthy mix. A mix is good, leaning more on the Beastclaw Raiders from a competitive point of view but it doesn’t hurt to have a couple of guys on foot hanging out in your back line to keep your point secured.

There’s 6 subfactions, and half are geared toward an all (or mostly) Beastclaw list and the other half is aimed at Gutbusters. If you want to rock a lot of Monsters, Boulderhead tends to be the go-to with the ability to hand out a mount trait to every Hero. If infantry is more your speed, Bloodgullet sees some play with its bonus spells and command ability to reroll wounds.

When you get to the table, you live and die by the charge phase. Turn 1 charges are a distinct possibility. Between the Frostlords command ability and extra movement from Ravenous Brutes you can easily get up the table and do tons of impact hits from Trampling Charge from almost everything in your army. Much of Mawtribes strategy relies on taking a solid chunk of your opponent’s army out with those impact hits, keeping some stuff back to grab any objectives not nearby.

Because of Might Makes Right you have fewer models but can make up with it by counting as a lot more. You’re tough too, which gives you some leeway to make mistakes. You can use Icebrow Hunters with Frost Sabres to outflank or catch objectives your opponent leaves empty. Overall, focus on hitting like a hammer to your opponent and deal as many Mortal Wounds as possible early.

When designing lists for these articles I tend to like to go for a “grab bag” approach of a bit of everything to try out the army and see what works for you. This one definitely skews very cosmopolitan in a way you probably won’t see competitively. You get 2 Monsters to hit things with, a Spellcaster and Priest and some infantry to move around. You also get a Hunter with Frost Sabres to jump behind enemy lines and surprise your opponent (or keep them on their toes).

If you want an economic option you can very easily grab 2 Start Collectings and run a list with a Frostlord on Stonehorn, Huskard on Thundertusk, 2 Butchers and 3 Stonehorn Riders and that’s it! Not even a bad list either! As an intro army it may give a skewed idea of the game as it plays so differently from most armies but you can learn to harness the power of the Everwinter.

If you have any Questions or Comments leave a comment down below or email us at contact@goonhammer.com.