The Sylvaneth are the spirits of the forest, led by Alarielle, Goddess of Life. Many were Wood Elves in The World That Was and now have reached a further connection with the woods they so protect. Alarielle is notably reclusive, hiding out in Ghyran the realm of life, she rarely speaking to the other gods of Order unless compelled by circumstance. She mostly finds herself attempting to rebuke Nurgle, the Chaos god of Decay, as he attempts to secure control over both Ghyran and Shyish.

On the table the Sylvaneth have a bit of a sordid history. While they were never S-tier they were fine but each subsequent update seems to be working against them. Their units are largely subpar and everything costs a bit too much. While they got a few neat tricks it doesn’t really make up for the poor damage and fragility they have on average. Also the rules behind your Awakened Wyldwood, the tentpole of your faction’s ability seem to change every other week.

So why should you play them? Well there’s a few reasons. The tricks they do get access to are quite fun, with lots of teleport shenanigans and line of sight blocking. The models are also gorgeous which makes them being not very good hurt even more. The Sylvaneth playerbase is a very enthusiastic bunch who love their tree children despite themselves. So if you like how the models look and don’t mind an uphill climb then Sylvaneth may be for you.

If you’re coming into this fresh I’ll save you the drama surrounding Awakened Wyldwoods. Just know that now they block line of sight against you (but you can still see through them), it deals Mortal Wounds to enemy units who try and stop near them, and you can teleport one unit per turn from one to another.

Other than that there isn’t too much notable here other than the reroll saves from Treelords and Kurnoth Hunters are now +1. Your endless spells are more expensive which is a huge bummer but Spiteswarm Hive might still have some defensive utility. Treelords got better with monstrous rampages, which is a positive. Overall you’re about where you were during 2nd edition, and sadly there isn’t much room to go down at this point. 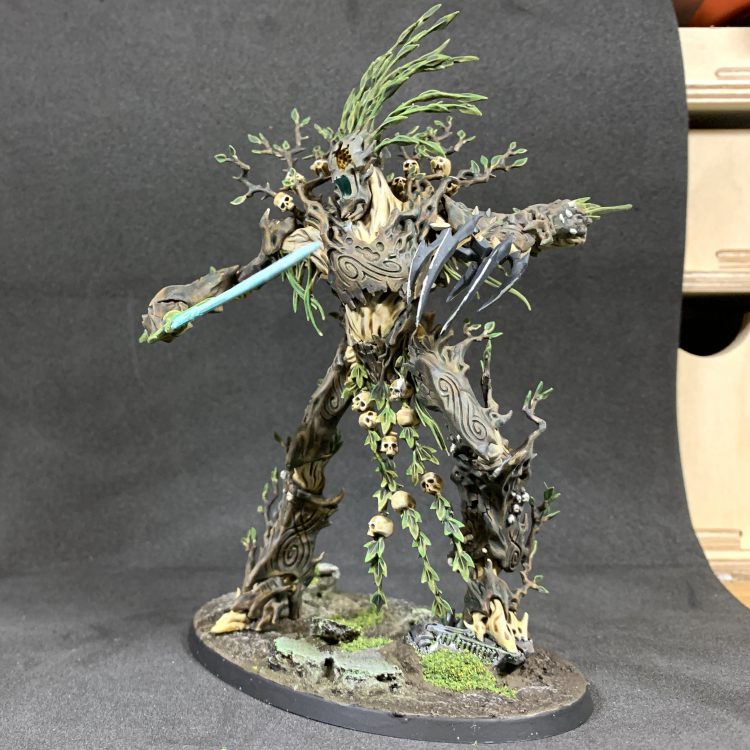 Sylvaneth are one of the factions that were born more or less whole cloth for Age of Sigmar. As a result they have a pretty slim stable of units and even among those not all of them are great so you can narrow the list down by quite a lot.

Alarielle is a character who’s value is fiercely debated, especially compared to the other gods walking around she’s pretty weak and probably a bit too expensive. That said she’s still very solid in combat, with her mount doing potentially 4 attacks at 5 damage a piece and her staff able to instantly merc a model. Rounding it off she can heal 2d6 wounds per turn on herself for free and D3 for units surrounding her. Healing aside though she’s still vulnerable to mortals and her damage output drops off fast if she is wounded so she’s far from perfect. Include her if you want, but you’re not missing much if you don’t.

Similarly, the Warsong Revenant is a contentious choice. A warrior-wizard with a 4+ ward but only 7 wounds and a 5+ save he can be difficult to use correctly. His +1 to casting when near a Wyldwood makes him potentially the best caster in your list. His combat profile is surprisingly decent, and hes a good candidate for Flaming Weapon. Similar to Alarielle, include him if you like him, but you won’t be missing much if you don’t.

Drycha is a named Warrior-Wizard and a common staple in lists. She get’s a lot of attacks both ranged and melee and her talon hit pretty hard too. Not much to say, she hits hard in a faction lacking in real hammers. Similarly, the Treelord Ancient and the named version Durthu are both great picks and you’ll want to include at least one. They’re cheap enough you can get away with two of them in some cases. The Treelord Ancient command ability is like a Mystic Shield that can’t fail, and the impale ability lets them potentially do a ton of mortal wounds on a 6 to hit. Finally, they can Stomp the Ground, not to be confused with the Monstrous Rampage it forces an enemy to fight last. Combined with Roar this can be deadly. Due to their random damage they can be a bit swingy but can stand up in a decent fight.

Branchwraith is an unsung hero. While not a huge stand out they are cheap, and can summon in a unit of 10 Dryads, which are not great but they can bog an enemy down for a turn and sometimes that’s what you need.

We focused a lot on your heroes because they’re kind of the stars of the shows now. Dryads and Spite/Tree Revenants are your battleline and pretty bad. Not much to say. You’ll take your minimum size units and go on with your day for the most part, though it’s worth keeping extra Dryad units in your bag for Branchwraiths to summon. Tree Revenants get a free teleport every round that doesn’t rely on Wyldwoods, so keep that trick in your back pocket if your opponent doesn’t guard their objective. Kurnoth Hunters are a decent hammer unit, though less good now that their reroll saves ability got nerfed. You’ll tend to want to give them scythes. The extra rend is essential especially in a world of All Out Defense.

Buy Wyldwoods. Like at least 3 bare minimum. Which is a huge paint in the ass to transport but you’re going to need them. Awakened Wyldwoods are your bread and butter and so many of your army’s core abilities rely on them that you’re at a huge disadvantage if you’re not near them. You get one in your deployment zone to start, with a few ways to gain new ones (Alarielle’s warscroll spell, Treelord Ancient’s command ability and the spell Verdant Blessing which every caster in your army knows on top of their other spells). These block line of sight, protecting your units from deadly ranged attacks, deal Mortal Wounds to enemy units nearby and many warscroll abilities require a Wyldwood in range. You should be summoning these whenever you can near essential objectives, choke points, anywhere you might be able to catch the enemy. Your ability to teleport between them can be essential for grabbing objectives, surprise attacking an enemy unit and running away from danger. Note that the Spirit Paths ability on Durthu/Treelord Ancients is a seperate ability from your Navigate Realmroots battle trait, so you can use this multiple times and still get the battle trait for another unit.

The further nerf to Kurnoth Hunters and the rise of Monstrous Rampages has shifted the meta of the army more toward Monster lists. You’ll notice in the discussion of units much of the conversation was about your Leader-Behemoths. You’ll want to focus your energy on your battleline being the chaff you use to block the enemy and buff up your monsters so they can hammer in. Stomp the Ground, Roar, Stomp to deal mortal wounds. Whatever it takes to disarm the enemy while you hack them with your cool tree sword.

For subfactions, Gnarlroot is generally the top pick. Reroll 1s to hit is incredibly useful, especially when the only requirement is to be near a friendly Wizard. Since most every leader in your army is a Wizard, you’ll almost never be caught without one. Dreadwood and Harvestboon also have reroll 1s to hit under specific circumstances, so depending on list composition it could be worth looking at, but it’s hard to argue with “being near a Wizard, which you have a ton of”. Winterleaf is also a valid option in my mind, as exploding 6s is huge if you get a lot of attacks (like with Drycha). 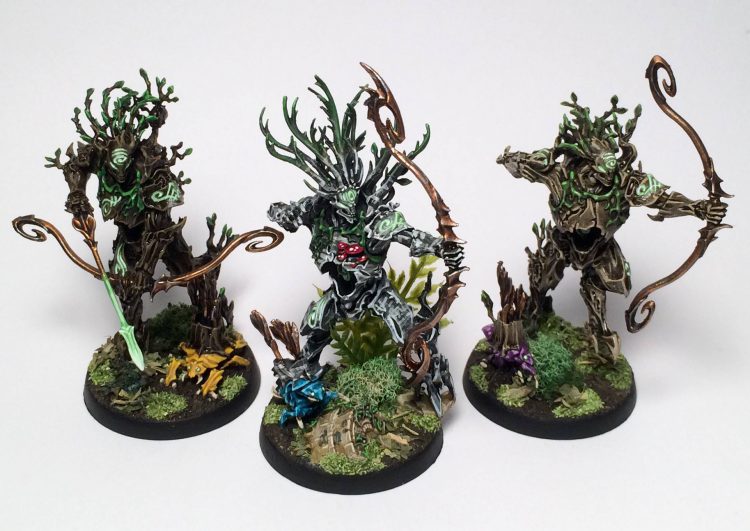 There are a few ways we could go about this but let’s look at a solid grab bag of the things that will do well. The battleline is whatever and mostly serves to fill the requirements. The 10x Tree Revenants allow you to teleport onto an objective if your opponent leaves it open, but if they don’t it’s ok to throw them at the enemy to slow them down for a turn. Dual Branchwraiths is limited in utility, but helps fulfill the Warlord Battalion which we want, to give the Treelord Ancient the Amulet of Destiny. With Flaming Weapon he can deal some pretty meaty hits and Drycha and Alarielle aren’t slouches in combat either. With Regrowth and Alarielle’s warscroll healing ability you can keep it topped off from round to round, frustrating your opponent to no end. Use the branchwraiths to keep summoning in Dryads and teleport them around to steal objectives or just bog the enemy down.

Sylvaneth are an uphill battle to play but you can win. Matthew Kangiser went 5-0 at the Blue Sky Summer Open this past summer so it’s not impossible. Get out there and be a legend!