Fantasy Realms: A Touch of Magic (the Gathering) – Turn Order 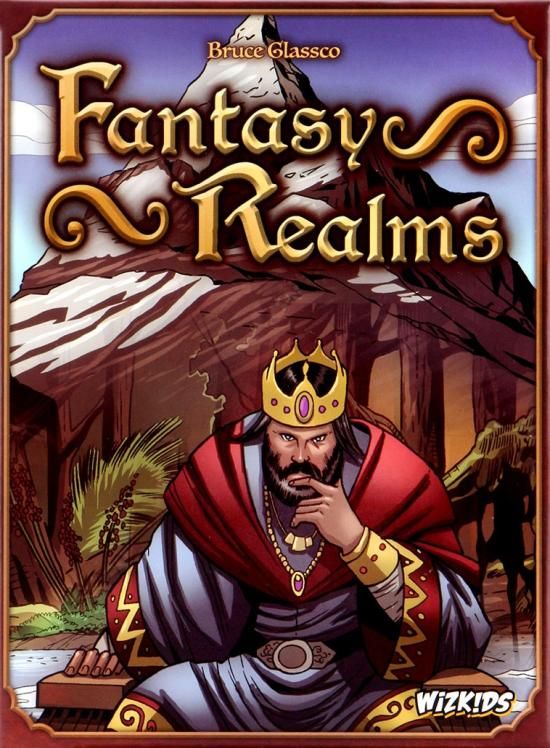 I like the idea of MtG. I appreciate the game’s design, mechanics, innovation, and the way it became a Lisztomania (or Beatlemania or NKOTB-mania or BTS-mania) phenomenon for the board game industry. As Ash in Alien once said: “I admire its purity.” But I’ll never say yes to a game of Magic for a 60-card deck of reasons.

Unlike mana, time and money are not renewable resources. I don’t have the 10,000 hours to become skilled at it. I don’t have the discretionary income for a lifetime subscription that funds endless new sets and boosters – let alone go on spendy, quixotic quests to acquire four copies of That One Card™ to make my deck bulletproof.

MtG has also proliferated and far outgrown its borders such that the edge cases have edge cases, the exceptions have exceptions, and the explainers need explainers. I don’t have the endurance to clear the rising bar of technical chauvinism required to learn MtG’s meta lingo and decode umpteen blog takes and strategy guides that read like Klingon phrase books to a casual player.

The primary reason I avoid Magic is the existential dread I feel when I think about it. I think of the 20,000+ unique cards that have been created for MtG over its lifespan and the unfathomable number of 60-card deck permutations one can create from that population, and my soul deflates and says “why even bother?” I wouldn’t know where or when to start. I’m someone that needs more signposts and structure. I’m not Dr. Strange cycling through Endgame scenarios so can’t reach the edge of MtG’s known universe in this lifetime to find the walls, ceiling, and floor. I would break out in Gatorade sweats well before I tap my first card at the table.

[Editor’s Note: As someone who has recently become hopelessly addicted to Magic, Tiffany is 100% right about everything and all I can see is that Limited Booster Draft awaits with open arms.]

I know that this a “me” problem and not a MtG problem. My eyes are wide open: as a casual player it’s far too late for Magic and me. I was left behind decades ago. But I still thank Valki, God of Lies and give credit to designer Bruce Glassco for his Kennerspiel-nominated title Fantasy Realms (released by WizKids). It’s the first card game that isn’t Magic but that gives me a taste of Magic, and makes clear what I do love about (never having to play) Magic.

Fantasy Realms emits big anti-Magic energy upon first blush. It’s a non-skirmish, non-collectible card game with a deck of 53 cards. You are not a powerful wizard swirling spells, but instead a ruler aiming to build the most powerful coalition from five suits of fantasy-themed people, places, and things. Each card is mechanically unique and exists only in a single copy. There are wizards and royalty. There are beasts. There are land types (with far more interesting things to do than in MtG). There are weapons. There are artifacts. There are forces of nature. Seven of these cards, after about 10 minutes of card swapping gameplay, will comprise your entire world and determine victory.

Unlike MtG there are no attack or defense cards. There are no instants, interrupts, or continuing in-game card effects. The deck is 100% end-of-game scoring cards. Each card is assigned a 0-40 point value and bonus or penalty if certain conditions on the card are met, or not met. Boom or bust conditions depend on the combination of the final seven cards in your hand at game’s end. Some card combos are utter soulmates (netting you positive points) and some cards can’t stand to be in the same room as one another so negate each other or give additional negative points.

Players start with seven cards. Turns consist of a “one in, one out” forced draft and swap. Each turn you must draw a card and discard a card, keeping your hand limit to seven. Discards are placed on the table in a face-up spread available for any player to take during their turn instead of a (random) deck draw. This includes you if you want to try to retrieve your own discard later and it’s still there when your turn comes back around. (You most definitely experience and suffer from discarder’s remorse in a game of Fantasy Realms).

The face-up discard buffet is also the game’s clever timer; when the 10th discard is placed face up on the table, the game immediately ends and the seven cards players are holding determine final scores.

I love Fantasy Realms. It cuts to the chase, and often cuts to the quick. The game is a race car stripped down to the essentials and built for speedy fun. Yet these speed runs teem with player interaction and a crunchy, 4D decision space. Choices are teeth-grindingly tight and tense. Your seven-card hand is a full, tiny lifeboat; you can’t save them all. So which card is expendable each turn? Tossing one into the face-up flotsam of on the table is nerve-wracking and comes with a high wince factor when opponents are all too eager to scoop up the card you just agonized over giving up. Possible insult to injury often occurs if you later see a left-for-dead card’s comboriffic soulmate that your opponent bingos or that is too late in the game for you to rescue from the trash heap.

Fantasy Realms is ultra tactical as you change your card swap priorities and set collecting strategies on the fly. “Take backsies” are common when you reevaluate the perfect 7 you wish to keep, or flip-flop on a card you tossed earlier. And the discard economy is a teeter-tottering trolley problem: extend the game by not drawing from the top of the deck, which will add another click to the 10-card endgame timer? Or fast-forward to the end by top-decking and triggering the 10-discard endgame as soon as possible? Games are so quick that there’s no regrets even if you fail to collect that 4-card “Bell, Book & Candle” power combo that guarantees 150+ points: 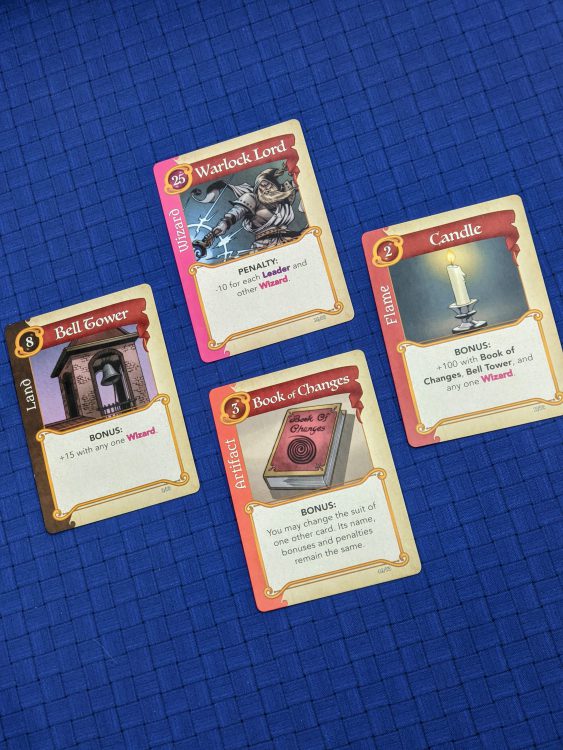 And as for the existential, “why bother” sweats I get ruminating over Magic: while 53 cards does not a micro card game make, Fantasy Realms sure feels like a micro game when side-by-side with MtG. It’s Magic: The Gathering in haiku form. A dynamic distillation of the ideas in MtG that feels like a one-act, ten-minute play.

I love that Fantasy Realms is not a deckbuilder but a handbuilder. It’s true hand management from a shared, finite, knowable population of cards. It’s easier to grok the percentages and risk the odds to collect That One Card™ when there are only 53; there’s never a need to page Dr. Strange to run the numbers for you.

I love that in Fantasy Realms there is no deck engine to build, no grinding metagame to go get that card that hits the jackpot. You’ll press your luck and hope you see those combos. And you’ll either see them or you won’t. New game. Since cards combo for endgame scoring only there are no in-game shenanigans. And the 50+ unique endgame scoring prerequisites is crystal clear. There are no edge cases requiring adjudication or a podcast to suss out.

I especially love that there isn’t direct conflict in Fantasy Realms. Players collect cards to build something: a coalition, an ideal army, the best equipped fortress. Fantasy Realms feels like a prequel to Magic standard game narrative. In Fantasy Realms the story ends before the onslaught of head to head conflict takes place. As well as the deck fishing and deck emptying iffy combos with soon-to-be banned cards (things that I have an allergic reaction to when gaming).

[Ed: Again thinking about Limited Magic, Fantasy Realms captures the interaction that comes from reading signals and trying to divine what your opponents are drafting.]

The crux of my Fantasy Realms admiration is that it restores the agency back to the players at the table. MtG matches and tournaments boil down to their metagaming abstractions: two decks playing themselves, with the players literal avatars, subsumed by their own constructed decks. Good players do possess skill and expertise, and the usual suspects are always at the top of the rankings. But at its most pessimistic, MtG players are always second billing; afterthoughts to the currency and value of their cards. Like Dr. Frankenstein, eclipsed by their own (monstrous) creations.

The apocryphal story behind the origin of Magic: The Gathering was that Wizards of the Coast wanted Richard Garfield to create a game that was portable, with minimal components, that could be played by people waiting in line at game conventions. MtG didn’t quite achieve that goal. (My friend joked “that’s because for MtG you still need a table to flip when you lose.”) But Fantasy Realms gets closer to that simpler, lofty ideal.

And while Fantasy Realms isn’t a MtG killer, and while it may never compare to an 18-card experience like (say) Love Letter, Fantasy Realms is a metaphorical love letter to Magic. And it’s alchemy: a bottled essence that helped me remember what I liked when building and playing those nascent Magic decks decades ago. Before 20,000 cards were created, with an endless pipeline of more to come. Before power creep. Before banned cards. Before the digital age. Before the slap-fight ethics of netdecking. Before the CCG bubble, and before the Wizards of the Coast realized that the secondary market of trading and buying cards was hugely important (at times more important) than the game itself. Before setting your watch to the Next Big Deck, always tournament-ready and programmed to within an inch of its life and as soulless as an infinite loop you programmed in BASIC on the Commodore 64.

Fantasy Realms reminded me of the initial feeling of enchantment and excitement I felt experiencing a wholly new game system that transported me to a new world and told a wondrous story. Back when I had 1st generation naivete and took for granted that when playing MtG I’d be more invested in my friends at the table and the social experience than with the rules and cards themselves. Unlike my least favorite bits of Magic the Gathering, Fantasy Realms is a card game that can remain untroubled and unconcerned with which decks win or which decks lose.