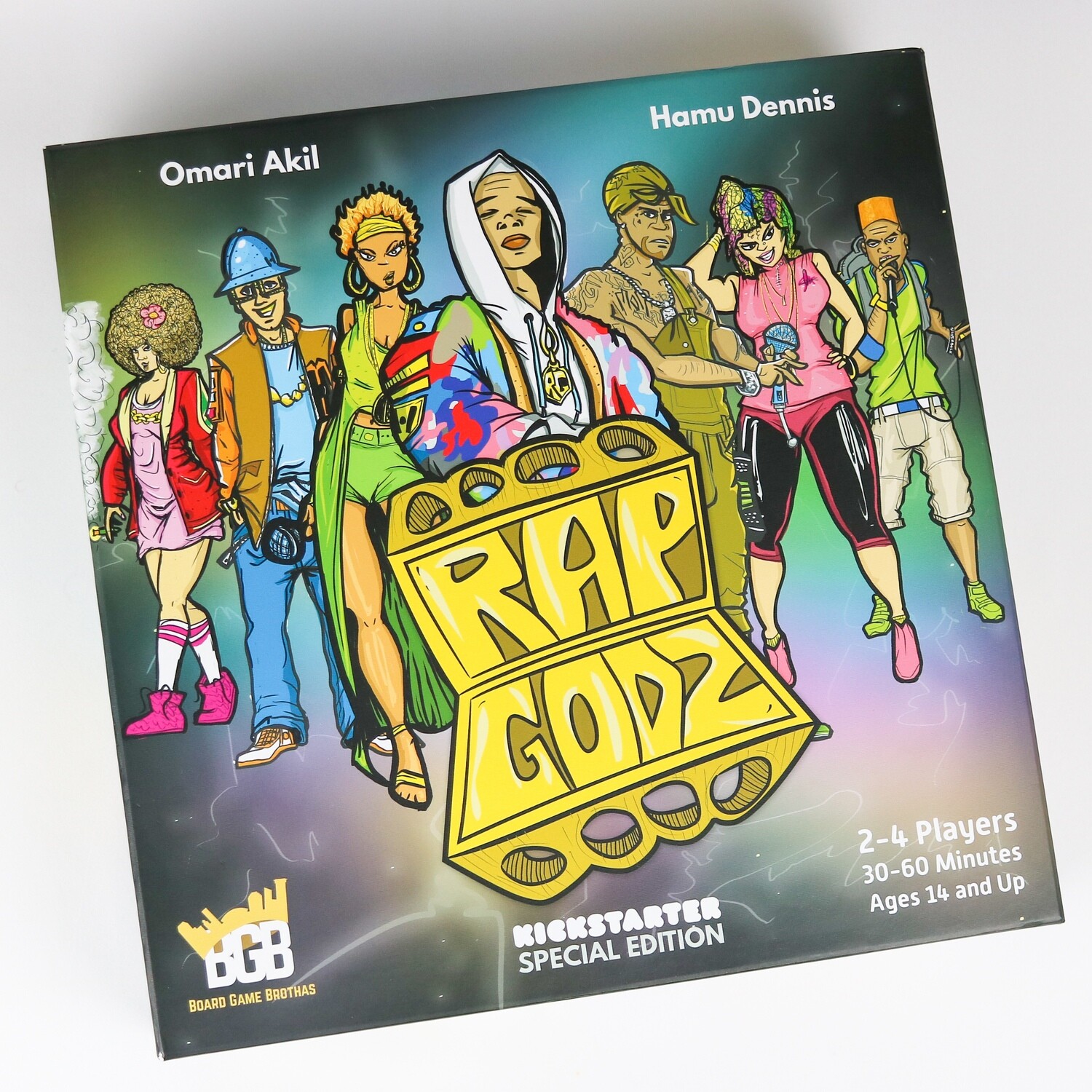 It’s natural to sit down and play a game and start comparing it to familiar games. A certain mechanism might remind you of one game, the way scoring works reminds you of another. This can be handy when it makes learning easier. When reviewing however, it can be a trap as you spend too much time comparing the game to others rather than discussing its own merit. There is no danger of that here. Despite being made up of familiar mechanisms Rap Godz feels fresh and wholly new.

Designed by Omari Akil with art by Hamu Dennis, Rap Godz is the first game by publishing company Board Game Brothas (co-founded by Akil and Dennis). Players chart their way to the top of the hip-hop game via a simple card play mechanism that sees them collecting “street”, “skillz”, and cold hard cash. These are not resources in the traditional sense; they can’t be spent. Instead they function as scoring tracks that are constantly in flux.

When I say simple, I mean about as simple as you can get. At the beginning of each round you’ll draw 5 cards; on your turn you’ll draw 1 card and then play 1 card from your hand. Each card provides some number of the aforementioned resources, along with a few VPs represented by foil embossed cardboard plaques; you’re t trying to go platinum baby. Along each track are some bonuses for the player that reaches the threshold first. There are public and private scoring bonuses related to those tracks to add up at the end, but at this point you could almost sit down and start playing. The only wrinkles to this simple formula are the existence of cards that initiate a die-roll that can cause you to steal resources from an opponent, and a face-up row of powerful cards that you can only acquire by discarding 3 from your hand.

As I said, mechanically this game is accessible and easy to get to the table. It sets-up quick and plays briskly in about 30-45 minutes. Narratively, however, Rap Godz absolutely separates itself from every other gateway-weight game on the market and not through paragraphs of flavor text or story books. Rap Godz is infused from beginning to end with flavor and panache that elevates those simple mechanisms and turns the game into something awesome.

The first thing you’ll notice is bombastic art style that doesn’t look like anything else on the market. Everything is covered in it; the board, the rules, the cards, and it all serves to infuse the game with a colorful graffitied life. The board is designed to look like a turntable, with the score tracks wrapping around a record in the center and round trackers that look like sliders. Attention to detail, like the gold and platinum plaques show the care that went into every element; even your cards align as you play them to form a giant gold chain growing longer as your legend builds.

Similarly, the setting is reinforced across the other elements. The game’s rounds represent an Album in your career with each turn (and thus card played) representing a Track. Mechanically the cards provide resources and are colored coded in a way that feeds the end-game scoring. Narratively, each represents highlight moments from your career. Whether you’re spitting a Complex Rhyme Scheme, seeing your Manager Killed, or you have to Spend 60 Days in Jail, you’ll live the life and career of your chosen Rapper.

Now, notably Akil doesn’t shy away from representing the highs and lows of an indie rapper. You start with nothing (there’s a card representing you going viral on Facebook) and build up, but on the way there are struggles along with the triumphs. The die roll-offs are Beef cards, where you go directly after one of your opponents and transfer resources. These can represent anything from stolen lines to “Baby Mama Drama”. Now there is nothing more to these elements than the name, but Dennis’ art brings them to life. As you play through your career, reading them out as you play it’ll knit your story together.

It’s not just the art that pulls in hip-hop culture, however. Rap Godz is a game about making due with what you’ve got. About using your strategy—and a little luck—to win the day. Depending on which Rapper you choose you’ll have private abilities and goals that are not necessarily equally easy to score based on how the game plays out. The City you’re from will position you ahead or behind of your opponents on the resource tracks potentially making it easier to grab those bonuses (called Pick Upz). I don’t find this variability anything out of line for similarly weighted games, but apparently it came up in playtesting. Akil wrote about this in The Manifold and I’ll let him speak for himself:

These playtesters focused on the player’s lack of control during Beef and on what they perceived as a runaway leader problem with Pick Upz. I listened to that feedback but never felt compelled to change anything throughout that conversation.

After a few days of reflection, I slowly began to realize that they were intentional features of a game steeped in black culture and perspective and that the playtesters’ feedback was coming from a very common set of design ideas that have been influenced by a predominantly white masculine perspective. My tolerance for randomness and being in an unfair position is a product of my lived experience.

I’m used to taking risks, and I understand that for reasons like prejudice and systemic racism I may have almost no influence on the outcome. I’m also more comfortable starting from a disadvantaged place and finding ways to overcome these things to the best of my ability. So I don’t see as big of a problem with games that let some of these concepts persist, and sometimes I connect with them even more because of it.

I hope I’ve been able to express how Rap Godz is made up of simple systems, but also how every element builds on each other in not so simple ways to elevate the experience. Akil’s quote reveals just how deeply considered and deleberate each element is. The art sets the stage, the cards tell the story, and the mechanical design balances tactical decisions with long-term goals laced with just the right amount of luck.

Gateway-weight games often feel like a remix of familiar mechanisms; I have a number that I play and love but it isn’t often that a new one surprises me. When I played Rap Godz I was struck by how fresh and unfamiliar it felt. The cardplay is remarkably simple, but having to balance your long term goals with very limited control over the card draw provides a good tension. It can be tempting to blame a loss on luck and not your hustle, but a few plays will reveal that the depth is there. And if luck does bite you, well that’s life.