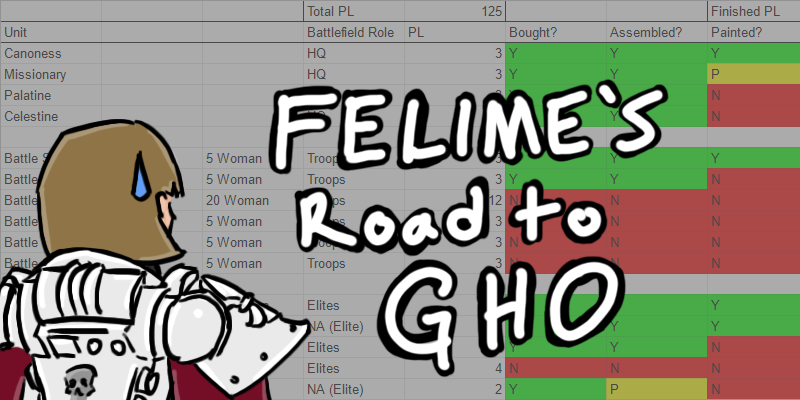 Welcome to this week’s episode of my road to the Goonhammer Open, where I chronicle the trials and tribulations of frantically trying to get an army ready for some stupid event.

When I say “week,” I mean that in the… absolute loosest sense possible. I sort of skipped a week. I royally screwed up my sleep schedule and it caught up with me. That said, I didn’t do nothing during that time, and if I weren’t in the middle of a mad dash to complete an event force, I wouldn’t consider it to have been all that bad a week hobby wise. So let’s take a look at what I did accomplish. 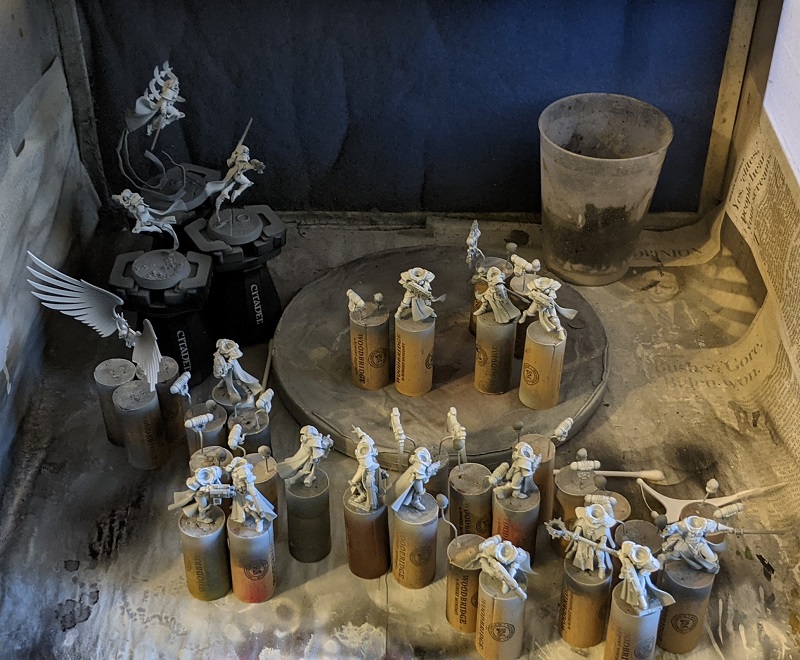 During the first week that composed this most recent “week” I assembled the bulk of the remaining normal sisters of battle for my army and airbrushed them with my usual style. (Grey Primer, Ulthuan Grey, White.) And no, I wasn’t flossing my teeth. Picks make good mixing and cleaning tools for an airbrush and I have them in the bathroom closet anyways. I also got Celestine and a Dogmata airbrushed, which is my secret plan to try to catch up on PL. 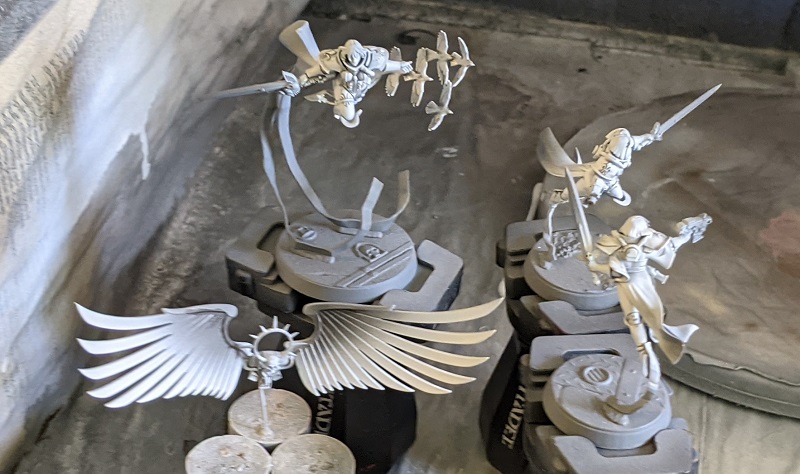 And here’s a quick look at Celestine’s wings after I did my recess shading. I spent a bit of time staring at the kinda monolithic white wings trying to think of how to make them interesting without doing any actual work. They’re so flat that trying to wash them and keep them white was only going to end up in tears and tide-marks, so eventually I decided to airbrush a black gradient over all of the bits I’d otherwise need to wash. I added a bit more after this, but forgot to get a picture at that point. 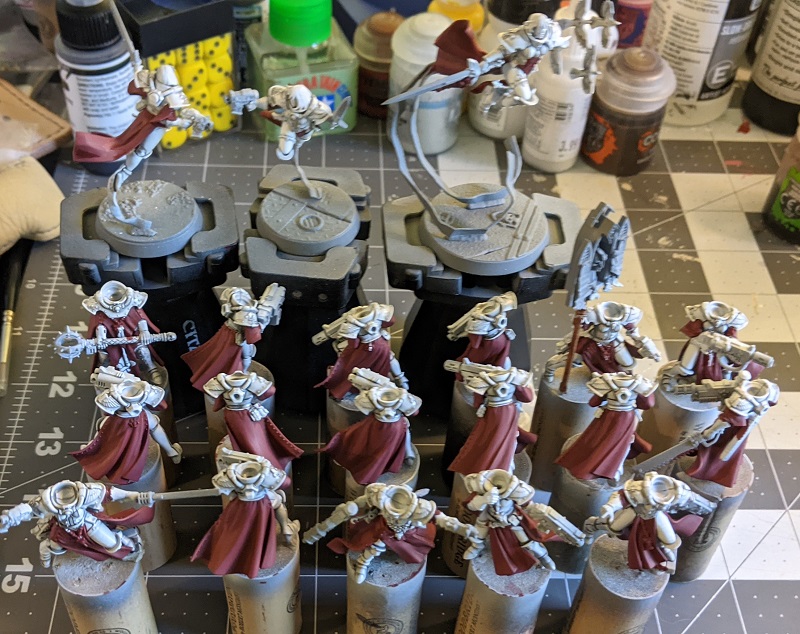 And now we’re getting into the next week. I really like doing the robes on sisters. They take to volumetric highlighting very well. This is after one highlight. They all got a second layer of highlights and then some edges to pick out the corners. (For the curious I use VMC Burnt Red with VMA Sand(Ivory) mixed in to highlight.)

Doing a 20 model batch was a bit… punishing, but small batches are for good boys who kept up their painting schedule. 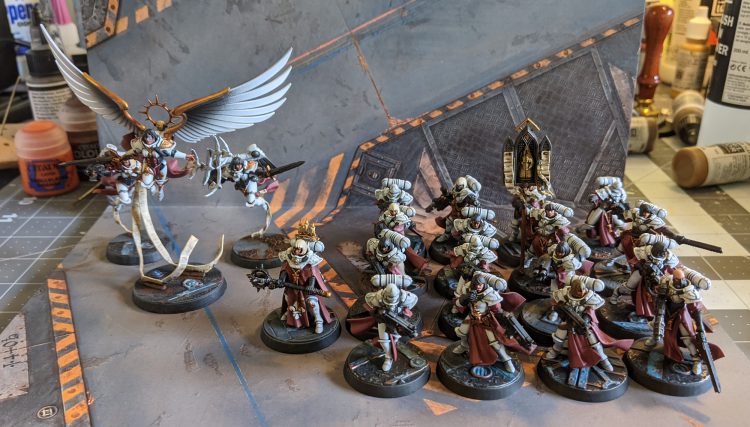 Fast forward to… well, Wednesday of the week after that. It took a bit of work to get them all done, but they’re DONE, and ready to join the crusade. I did skip a few bits like the buttons on their robes and eye lenses on the helmeted sisters which I can get to when I have a bit more time, but nothing I think anyone’s likely to notice from 3 feet away. 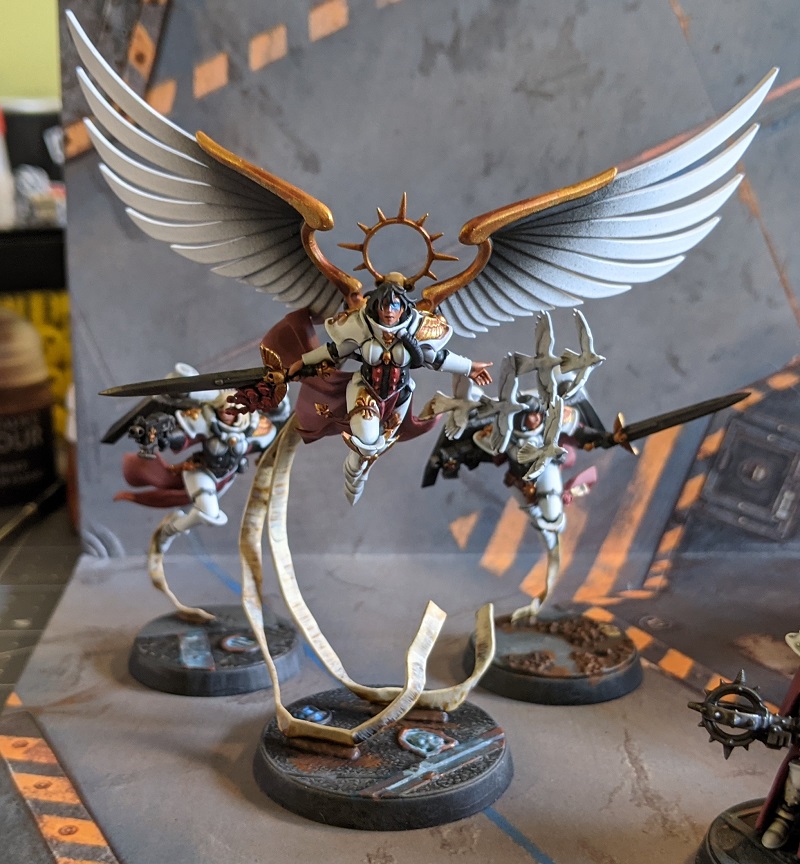 And a close up of Miss Murder herself, ready to smite the enemies of the God-Emperor. This will be the first time I use her, so it should be interesting. Also, whoever decided to basically mount these three models on what are essentially springs is a sadist and should be punished severely.

Anyways, let’s take a look at the scoreboard: 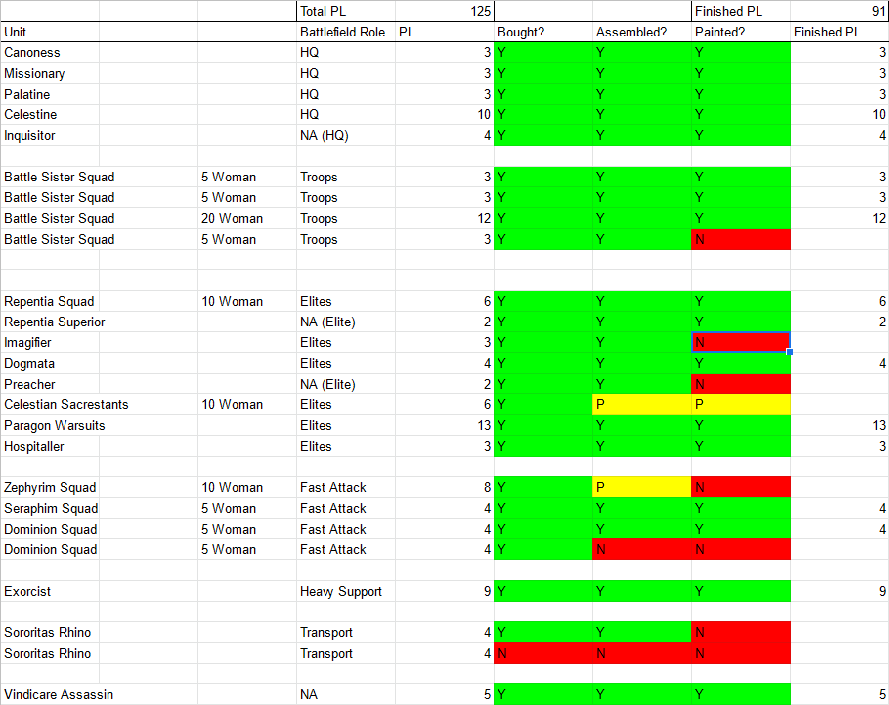 That big block of sisters basically allowed me to fill out the 20 woman squad (Stealing a few bolters from one other squad to fill it out,) as well as complete a Dominion Squad, Dogmata, and Celestine herself. That gives us a score for the ‘week’ of…

27? I didn’t actually math it out first, but that almost makes up for the skipped week. It’ll be a bit tight but I think we’ll squeak in before the buzzer.