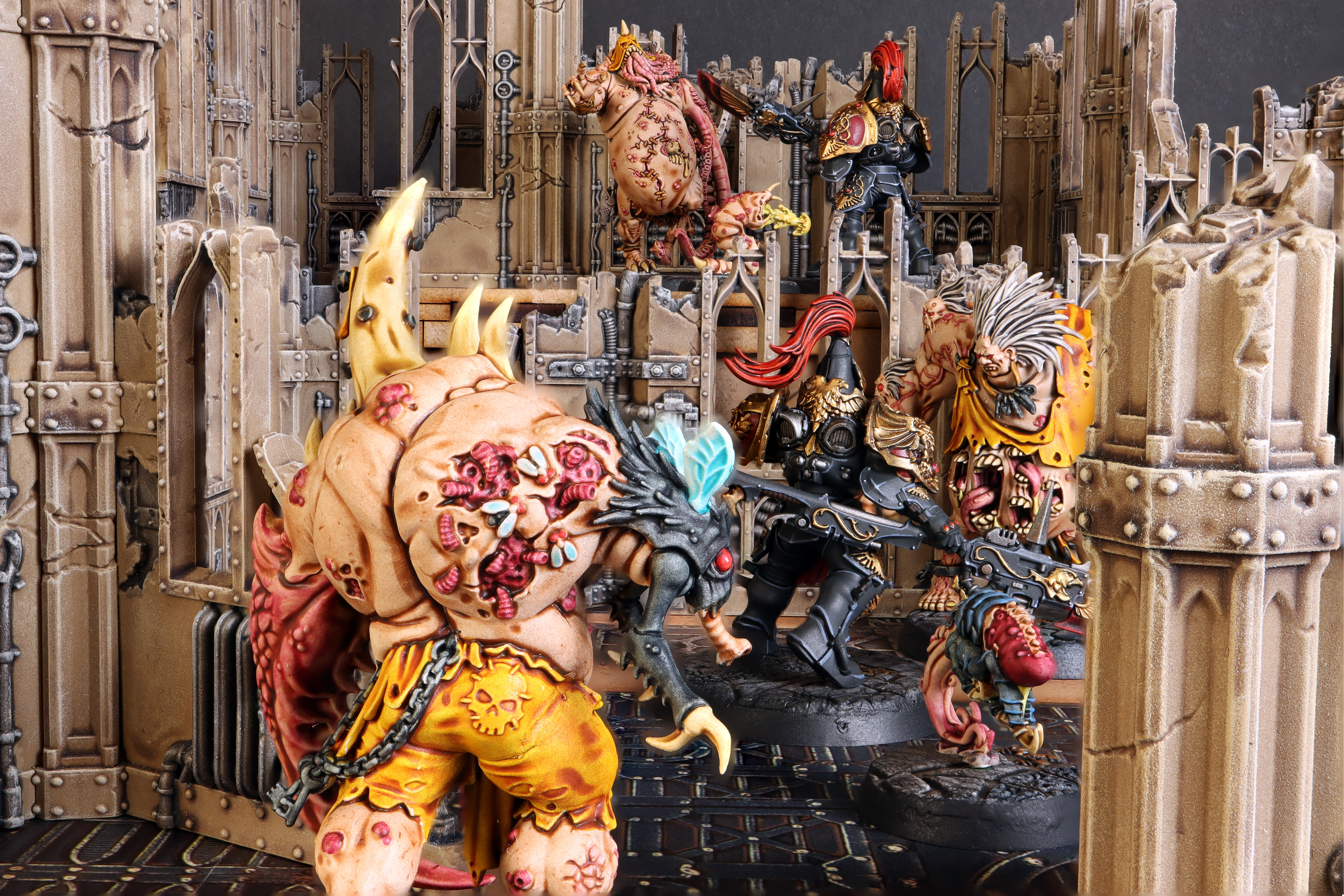 When was the last time we just talked, you and me? It’s always tactics, isn’t it? Always strategies and advice. Can we slow down, look at some cool models, and just chat about them? Oh this? I just opened it. It’s good, want to try some? Pull a chair up to the fireplace, let me pour you a glass, and let me tell you about my Gellerpox Infected … 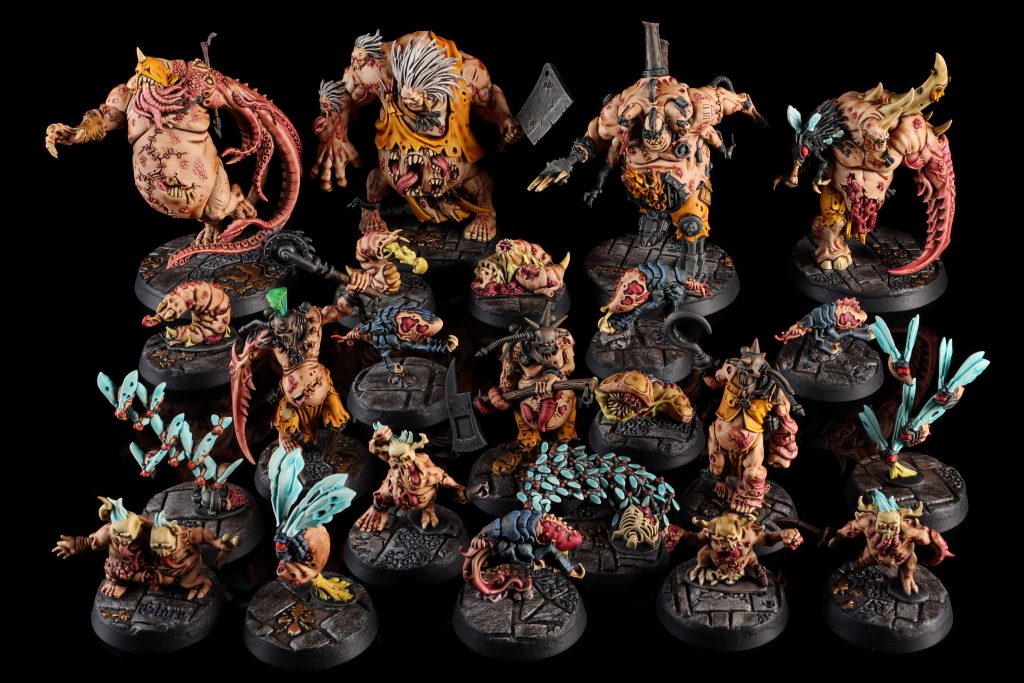 Can someone pass me the disinfectant?

What’s the word for a debut that’s also a finale? Like a Broadway play on opening night with a “Last Performance” sticker slapped over the marquee. A cruise ship on its maiden voyage with a course plotted straight to the scrap yard. Whatever the word is, it might be a good descriptor for the Gellerpox Infected. 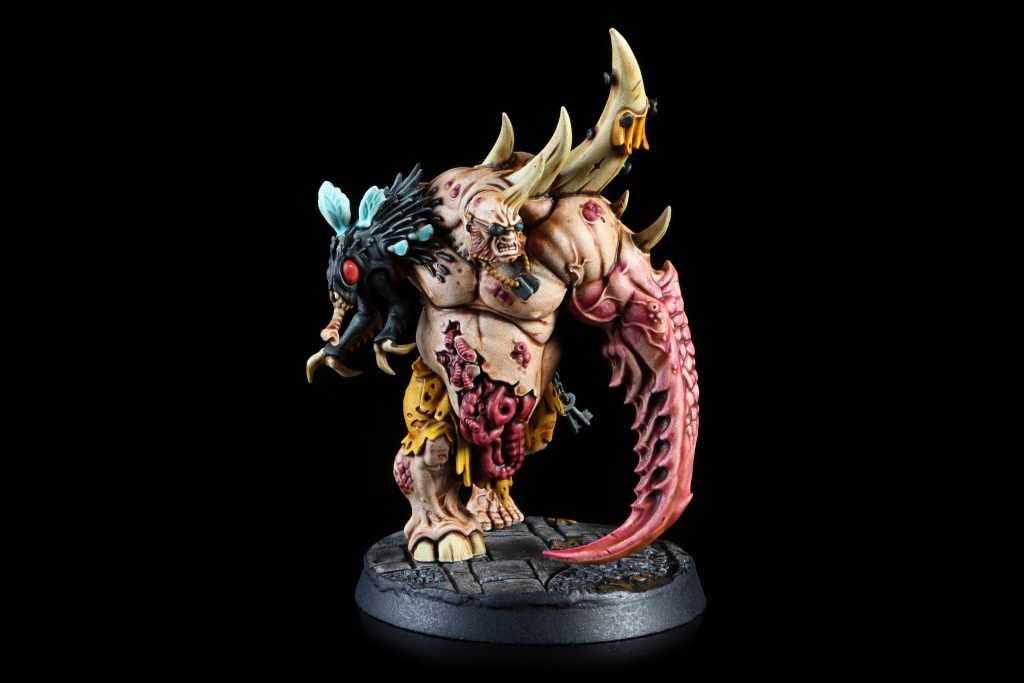 You got a little something on the top of your head. And back. And shoulder. You know what? You’re fine.

Announced in May of 2018 as part of “Rogue Trader – Skirmish Combat in the 41st Millennium”, a teaser dropped on Warhammer Community (watch the awesome trailer on YouTube) with little preamble. Few details were given, and the community was eager to learn more. However, speculation slowly died as nothing more was mentioned for months and months. And strangely, that Warhammer Community article was released shortly after the announcement of Kill Team at the Game Manufacturers Association Expo in March of 2018. Were the two products related, or was Games Workshop making two competing skirmish games in the same setting? It was unclear at the time, and they clarified things in September of 2018 when they re-announced a rebranded “Kill Team: Rogue Trader”.

Finally released in September of 2018, Rogue Trader dropped into my eager hands. I was painting Adeptus Mechanicus at the time and the Gellerpox Infected seemed like a perfect palette cleanser. They were the exact opposite of Admech: gross organic horrors compared to machinery perfection. 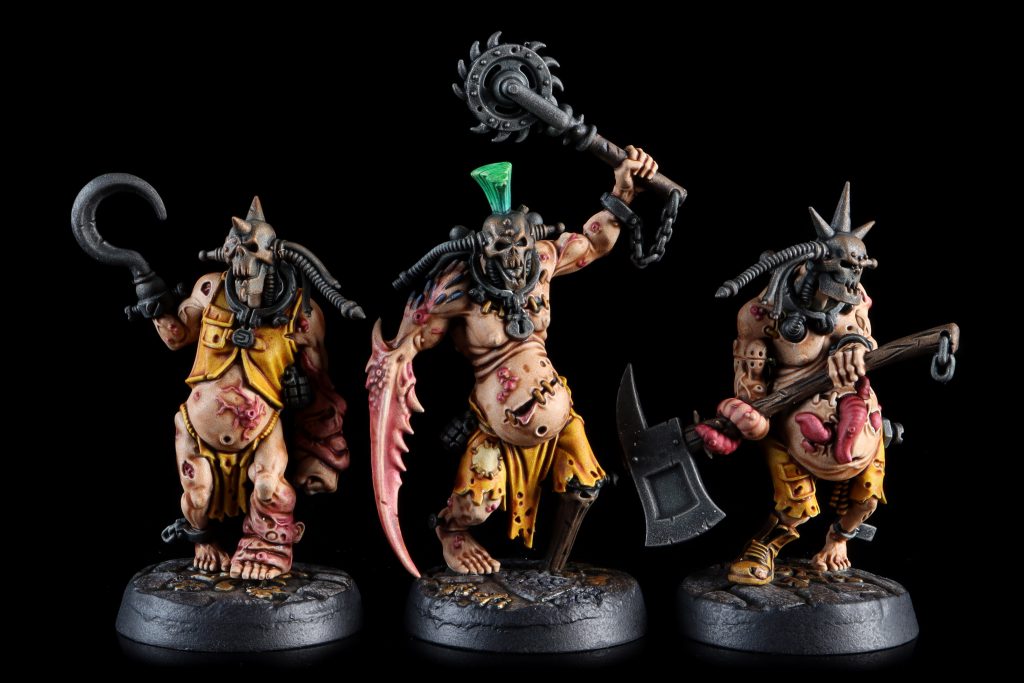 You ever wake up with bed head? Where the bed frame melted to your head? Also, your organs spilling out …

With both Kill Team and Rogue Trader released in rapid succession, I was eager to see what else was on its way. Kill Team continued receiving updates in the form of Commanders, Elites, Kill Team Annual, and White Dwarf articles. But nothing new for Rogue Trader, not so much as a single new tactic.

Eagerly I kept waiting for Games Workshop to do something with the expansion. New models in the range, new subfactions. Even new one-off factions like Gellerpox Infected and Elucidian Starstriders. But there was nothing. It seemed that Games Workshop debuted the faction and immediately binned it. My interest in Gellerpox slowly dimmed, and they stayed in my backlog until a certain global pandemic drew my attention back to these disgusting models.

The Real Gellerpox Was 2020 All Along 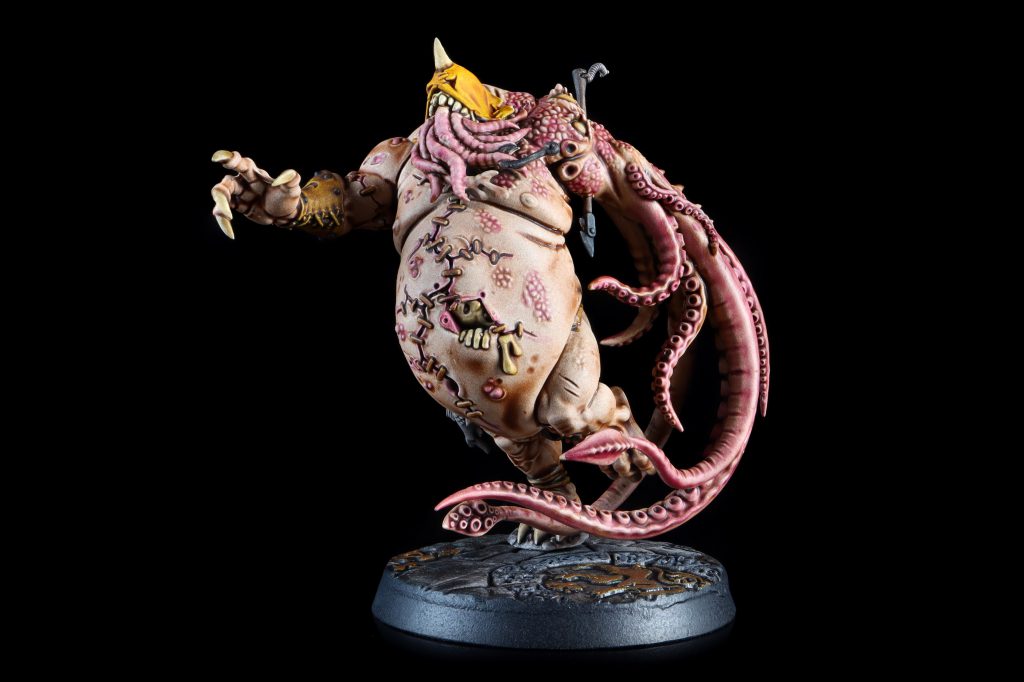 Stay home, even if “home” is inside the belly of a Nightmare Hulk

COVID-19 hit, and the world shut down. Forced to subsist on nothing but instant ramen, canned goods, and frozen meals, not much in my life changed. That is, until I started burning through my backlog and running out of models to paint. Digging through my bookshelf of boxes, I found the Rogue Trader box and decided it was an apt time to paint models afflicted by a reality-altering infection.

These were a bit of a challenge for me, as I didn’t have much experience building or painting organic models. Not much call for organs within the Adeptus Mechanicus. Fortunately, I had just finished painting 50 Skaven in a month, so I had some skin-painting momentum carrying me forward. 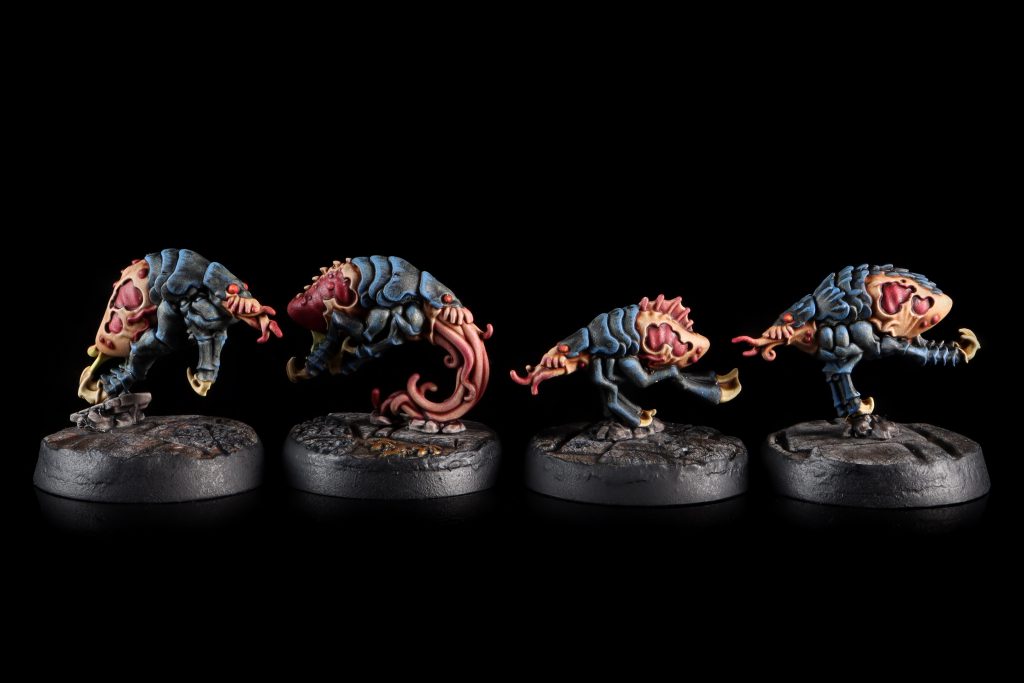 It took about a week to assemble and mount each model on brass rods. Once I had the assembled models in hand, It didn’t take me long to settle on a choice for paints. Looking them over, it was clear that Contrast paints would be perfect. All the veins, blisters, muscles, intestines, and general Nurgle-ness give Contrast paints a lot of interesting shapes to pool in and highlight. 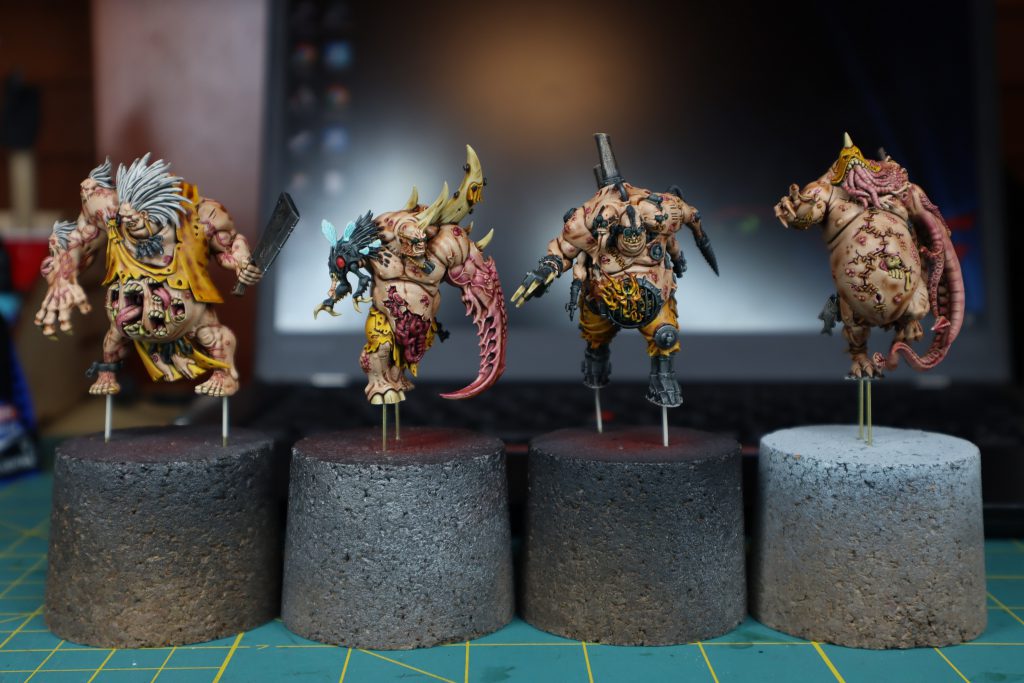 A rare picture of my hobby space: notice how the photo is cropped to hide the clutter

A habit I’ve gotten into with painting models is to drill tiny holes in their feet and superglue in brass rods. It lets me jam the model into big chunks of cork to hold while painting, and lets me paint the model and base separately. I started doing this for models that are difficult to adhere to bases, but I gradually started doing it for all models I paint. 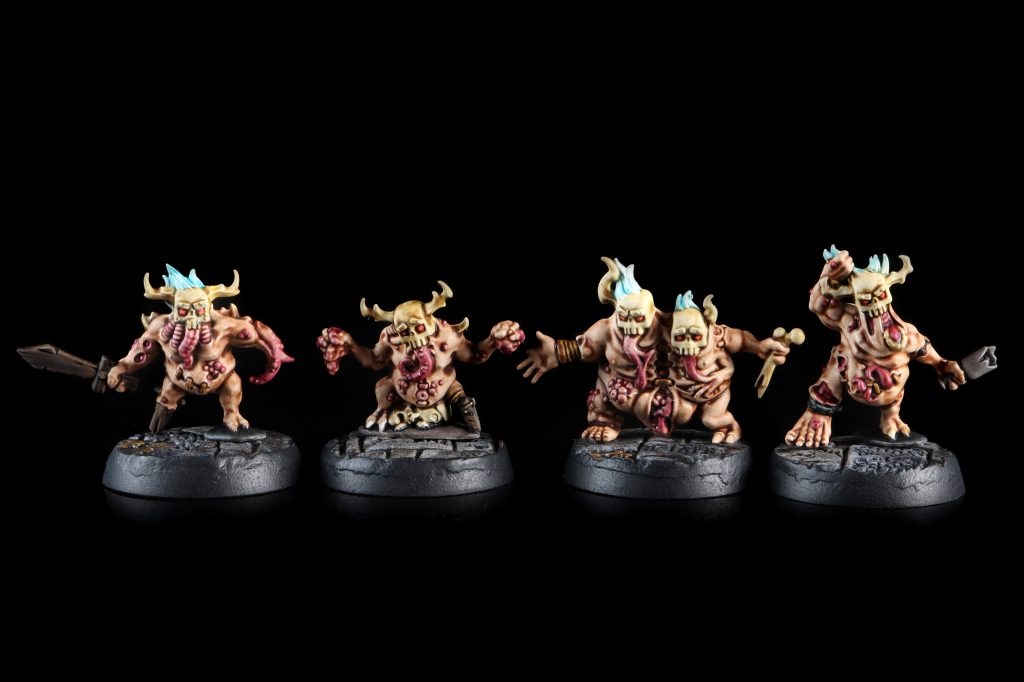 Drilling brass rods into these tiny little feet is exactly as annoying as you’d think.

The only downside to drilling and pinning every model is that it’s exceptionally difficult in some models: Skitarii with their thin legs, Hormagaunts standing on nothing but a single claw. But alas, that’s the price for always following this one weird arbitrary rule I made up for myself. 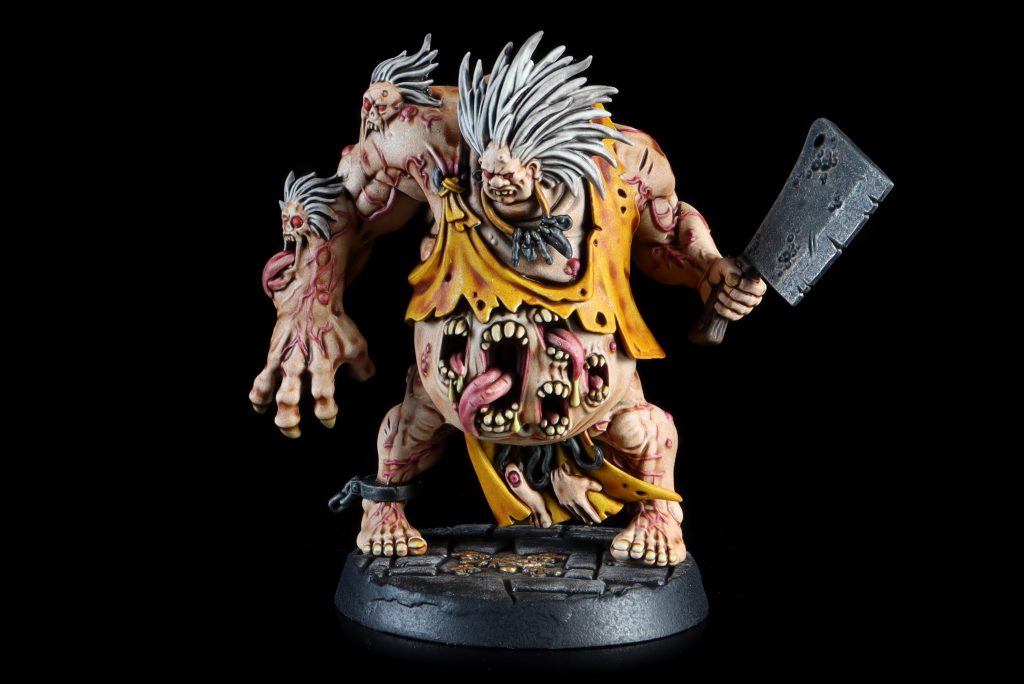 Close your mouth while chewing! That mouth too, and that one. Those five as well.

The more I use Contrast paints, the more I love them. With surprisingly little effort, you can get the entire spectrum from wash, to base, layer, and highlight. They’re easy to blend for smooth gradients, and if used sparingly then you get nice accent colors like the veins on the above Gnasher Screamer.

I could go on and on about how much I love Contrast paints, but it’s worth mentioning that the product line isn’t entirely consistent. Some of them are absolute staples in my hobby toolkit and I will never be without them (I’m looking at you Black Templar, Guilliman Flesh, Skeleton Horde, and Nazdreg Yellow), but others I have yet to find a good use for. For example, I really want to like Apothecary White but every time I use it on a mini, it just doesn’t click with me and I eventually paint over it with another color. To each their own, though! I’m sure someone has found a perfect use for Apothecary White, it’s just not for me. 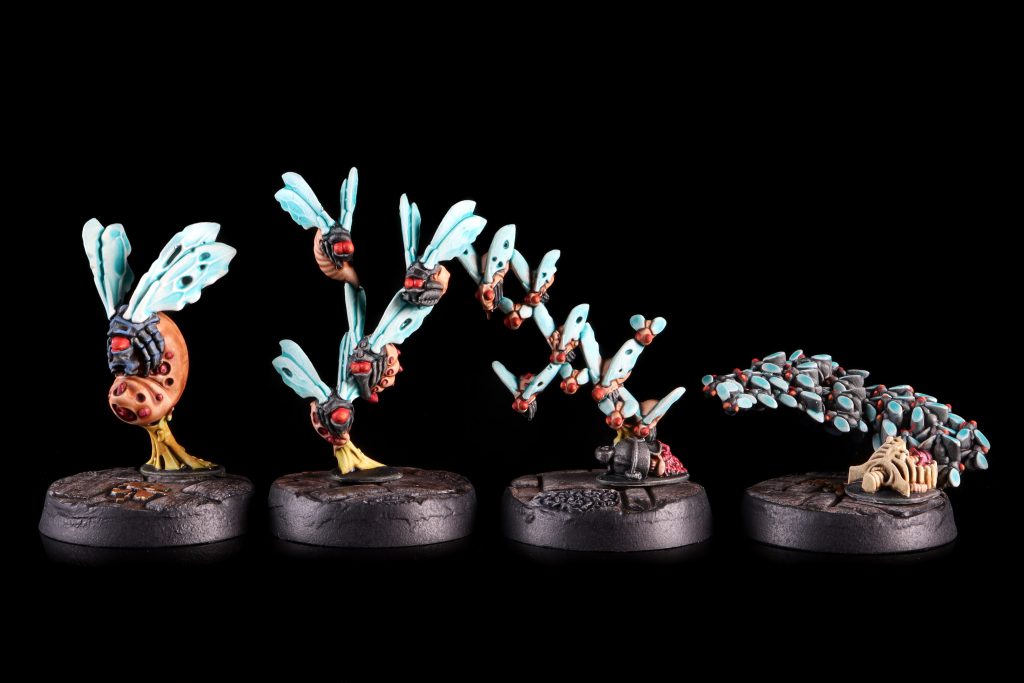 “I’ve got butterflies in my stomach!”
You should see a doctor, now.

I’ll cover painting the Gellerpox Infected in an upcoming How To Paint Everything article, but as a quick example, look at the wings on those Eyestinger Swarms. Imagine blending blue-to-white on each of those tiny wings with traditional paints. Madness! Instead, just prime with Wraithbone, slap some Contrast Medium down and hit the wing with Aethermatic Blue, let two pool together naturally and you’re done. It takes a couple seconds, no skill, and looks great.

Where Does That Leave Us? 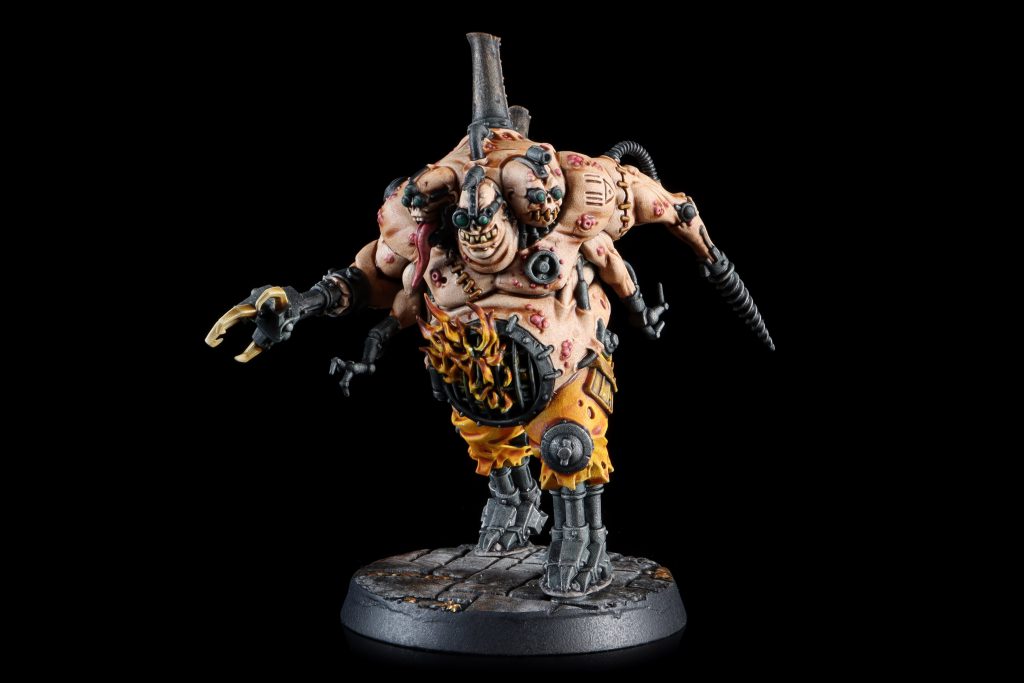 How my stomach feels after Taco Bell

How do Gellerpox Infected perform in Kill Team? Does their incredible melee make up for their slow movement, squishiness, and lack of shooting? Well, I defer to the experts on this. My own team has been relegated to my display cabinet until the pandemic passes, so it might be a while until I get to use them in game. But from what I gather, they were moderately competitive upon release, but Elites and Kill Team Annual gave out buffs to everyone else and left Gellerpox Infected with nothing.

It’s unfortunate, because above all else these models have character. Where other armies have endless copies of near-identical model sculpts, every single model in this team is unique and each tells a story. These models are absolutely packed with details, and it’s readily apparent that whoever did the concept work and sculpting for these models was in love with the project. Nothing about them looks phoned in or “just good enough”. 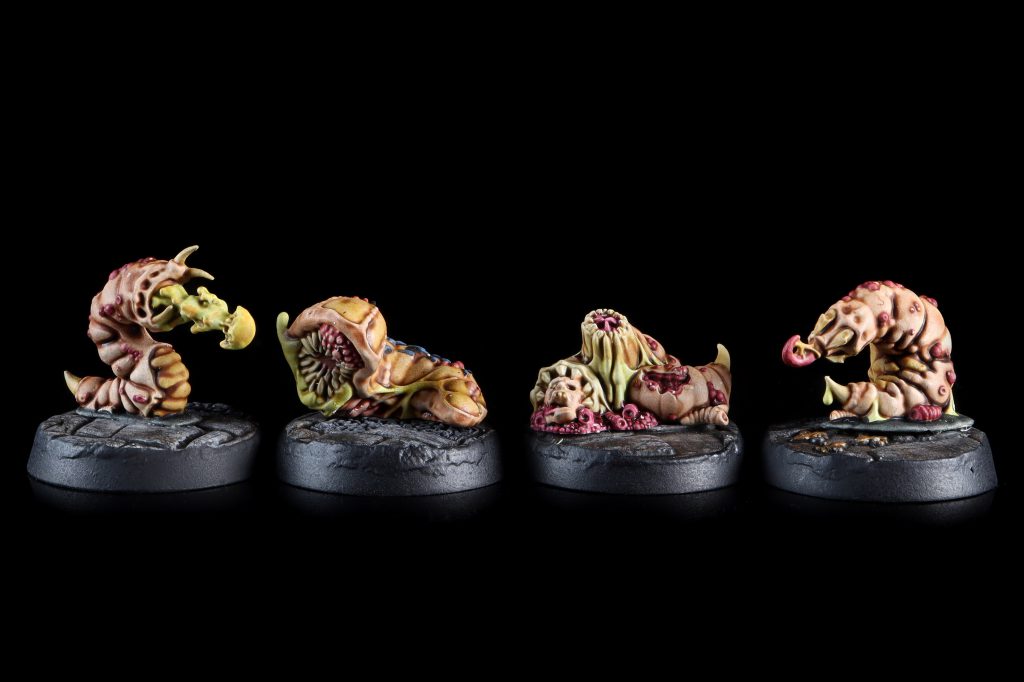 From the hulking commander Vulgar Thrice-Cursed, all the way down to the humble Sludge-grub, expert design attention was given to each and every model.

It may have taken me close to two years to build and paint them, but I love these Gellerpox Infected. They’re some of the best looking models in my collection, and I learned a ton about painting organic shapes while working on them. And while they may not be a strong contenders in Kill Team tournaments, at least I have some gorgeous models in my display cabinet.

That wraps this Fireside with Pendulin. Thanks for sticking around. No, don’t worry. I’ll wash the dishes and sweep up after you go. Thanks again for stopping by. If you have any questions or feedback, please drop a note in the comments below or email us at contact@goonhammer.com.